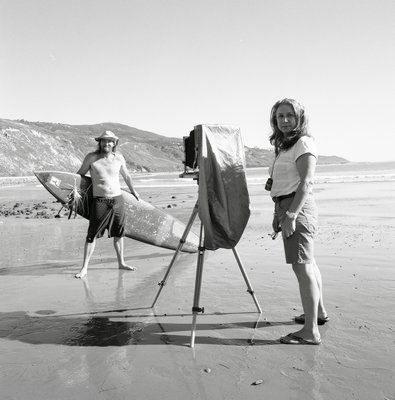 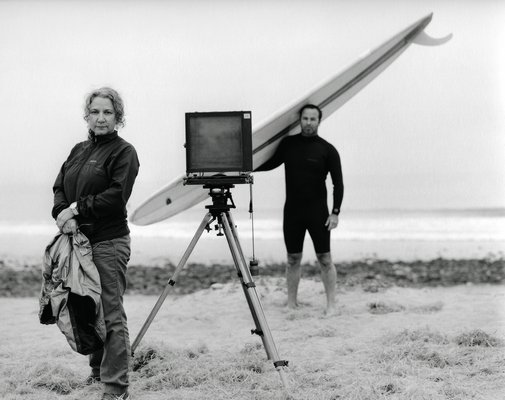 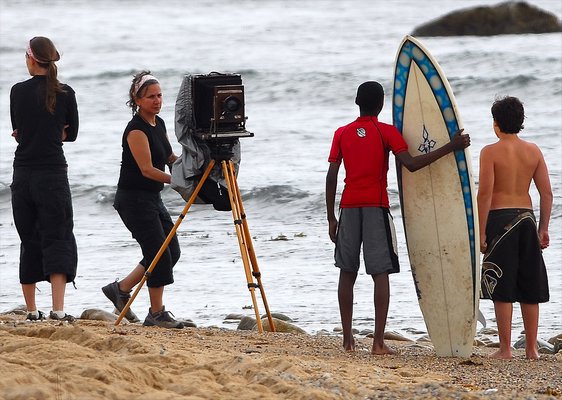 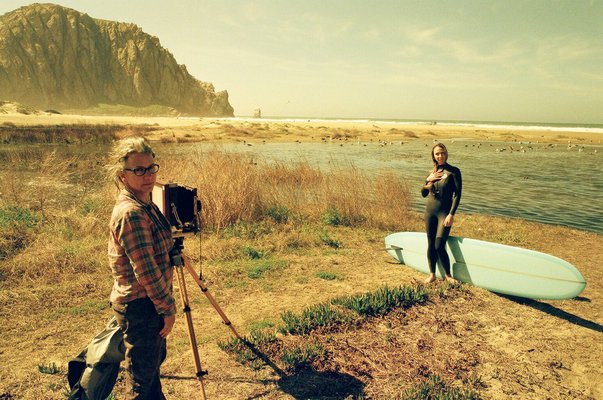 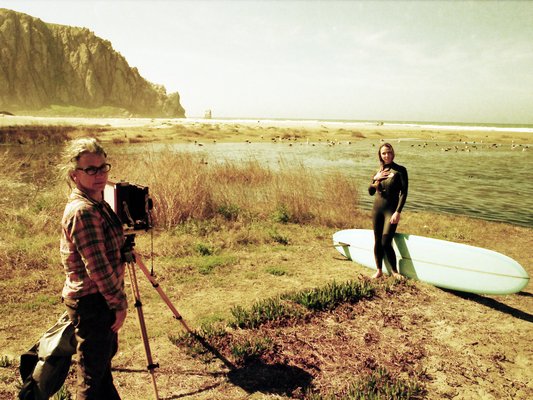 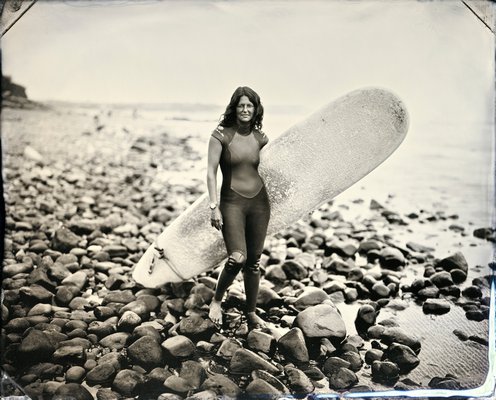 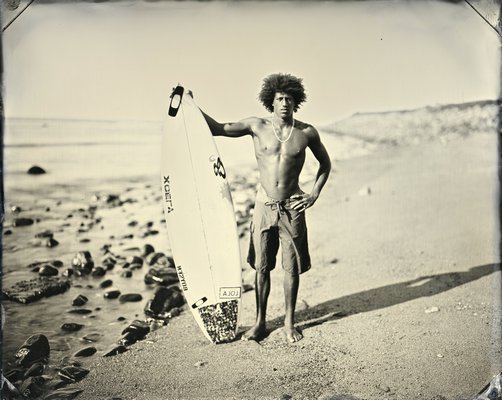 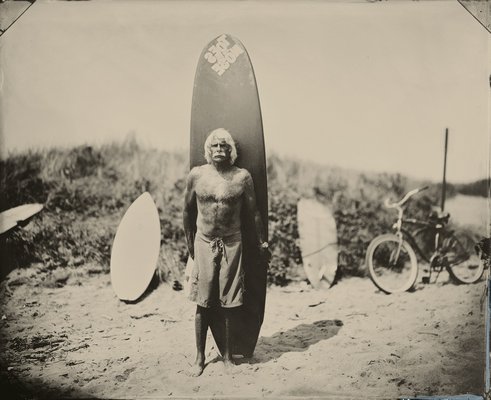 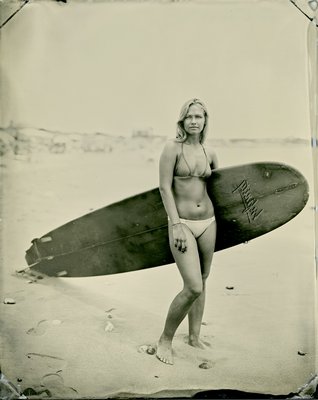 Joni Sternbach is willing to do what it takes to get the photo. And, in the mid-1990s, that meant hauling her large-format camera to the edge of a bluff in Montauk — over and over, unabashedly trespassing, for the sake of her art.

Perched at the edge of the cliff, her eye repeatedly gravitated to the ocean’s surface, her scope widening — only as the years ticked on — to include sky and beach and, one day, surfers. It was a gloomy afternoon, she recalled, the sky dark grey and the water glassy when the sun burst through the clouds and lit up the ocean “like a Dutch painting.”

“Suddenly, I was completely transformed,” the East Hampton part-timer said, “and I could hear everybody in the ocean cheering.”

The moment lasted no more than 20 seconds, and in that time, she made a pair of 8-by-10 photographs that, to her dismay, included people.

“I didn’t really want the surfers to be in this photograph, but there they were,” she said. “Later on, I realized this was a shared environment and I felt this enormous connection to them after I made this photograph — even though I never spoke to them because they were so far away. But I felt like, ‘Wow, we were there together,’ and that’s what it means to be out there for such long periods.”

She would soon experience those expanses of time firsthand, and her initial annoyance with the surfers proved to be ironic. They became the sheer focus of her 13-year tintype photography project, “Surfland,” a series that launched and borderline defined her career — and one she bid farewell in a very public way.

On June 15, the photographer announced the news to her social media following that she was giving up tintype surf photography, catching the attention of Sag Harbor’s Benito Vila, one of her 52,300 followers on Instagram and board president of the annual Artists & Writers Charity Softball Game. He interpreted her post as an invitation to ask her to photograph this Saturday’s showdown in Herrick Park in East Hampton, to which she enthusiastically said “yes.”

“It’s interesting to see how, when you put something out there, what comes back. I was particularly thrilled that he saw this as an opportunity to reach out to me,” said Ms. Sternbach who will not be making tintypes, but plans to use historic camera equipment at the game. “I’m just gonna wing it. I’m gonna get out there with something completely different and see what happens, and see if I can make a small project out of it. That’s my plan.”

She paused. “But to be honest, I’m a little nervous.”

A native New Yorker, Ms. Sternbach fell in love with photography while studying fine arts at the School of Visual Arts. Working in the darkroom was captivating, she said, and she promptly switched her major.

“It’s this moment when you are in the darkroom and you’re printing your negative and you put it in the developer and you watch it slowly come to life, this little piece of plastic that’s enlarged onto a piece of paper,” she said. “And it’s just this moment of, ‘There it is.’ It’s chemically driven, it’s light driven and this moment that existed is now alive again.”

The same sensation drew Ms. Sternbach to the art and craft of making wet-plate collodion tintypes, a finicky 19th-century process that relies on patience, experience and a touch of luck. The process is elaborate and dirty, and executed on location.

“It gives you an opportunity to go back in time and re-visit what all those forefathers and mothers of photography were doing, and taste it myself,” she said. “It’s like an old recipe that you get to make and experience.”

First, the plate is hand-coated with collodion — a mixture of gun cotton, alcohol, ether, iodides and bromides — and sensitized in a bath of silver nitrate for several minutes, after the photograph is framed. Then, the plate is placed into the back of the camera and ready for exposure.

“The exposure times are slow,” Ms. Sternbach said. “It takes bright sun and a fast lens to make an exposure. After you make your exposure, you take the plate out of the back of your camera and then you develop it in the dark, and you rinse it in the dark. Then you can come out into the daylight and fix it in daylight.”

As the plate is submerged in the fixer bath, it transforms from a bluish negative to a positive image on blackened metal — in essence, a tintype, Ms. Sternbach explained. And it is with this 19th-century technique that she returned to her favorite bluff in Montauk, where the conditions were nearly the same as her breakthrough photography moment years earlier.

“It was overcast, it was grey, it was humid, it was disgusting,” Ms. Sternbach said, “and this guy is walking along the bluff and he started talking to me. I explained what I was doing and I said, ‘You know, I really wanted to photograph a surfer,’ and he said, ‘Well, I’m a surfer.’”

She asked permission to take his photo once he got to the beach, and after some hemming and hawing — and a playful smack from his girlfriend — he agreed, making his way down to the sand with his surfboard. He changed into a white rash guard, to the photographer’s unexpected delight, giving a pop of contrast against the moody sky.

“He just stood there holding his board, looking at me, because he needed to look at me so he could see when I was done,” she said. “I snapped a photograph, he went in the water, and it was amazing. I processed it and I never saw the guy again, and I thought, ‘Oh my gosh, this is fabulous. This is what I need to be doing.’ And then I did.”

For the next 13 years, Ms. Sternbach frequented the beach — any beach — at least twice weekly, photographing hundreds and hundreds of surfers, developing not only the photographs before their eyes, but a relationship within the subculture.

“My project was completely social, on the beach, in public. It was one-part photography, one-part dog-and-pony show,” she said. “The reason I chose to make tintypes of surfers is because I wanted a direct positive. That means it’s reversed. The process of photography re-reverses itself through the negative and then again through the printing process. A direct positive is backward, so all of my pictures of Montauk will show Montauk in reverse.”

While the “Surfland” project began on the East End, it soon spanned the globe as tintype became increasingly popular, taking her to Australia, Uruguay, England, France, both coasts of the United States, and Hawaii.

“You can’t fly with these chemicals, so as the process really grew, I was able to work in a variety of places that I never would have expected,” she said. “The whole experience of finding, meeting, photographing surfers has been a journey for me that has totally altered my life. Sometimes we need to do things differently in order to bring us to a new place, and it got me doing things differently.”

Though she won’t be creating tintypes, Ms. Sternbach will bring a variety of cameras — including a vintage, large-format Graflex — to capture portraits during the Artists & Writers game. The charity softball game in East Hampton is a classic annual rivalry that goes back decades between the artists, who are currently led by Leif Hope and Ronnette Riley, and the writers, anchored by Ken Auletta and Mike Lupica. The showdown is always a competitive one — a longstanding, 71-year tradition that is speckled with celebrity appearances.

“I think it would just be wonderful to make a picture of every player in some way, shape or form,” Ms. Sternbach said. “I’m going to be working with older, vintage lenses, some that have these spherical aberrations and create one sharp center point of the image and the rest is all out of focus. I think it should be exciting and fun, but I can’t tell you what it’s gonna look like.”