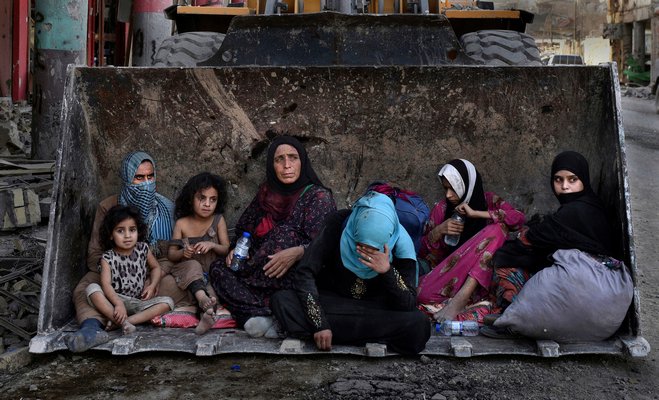 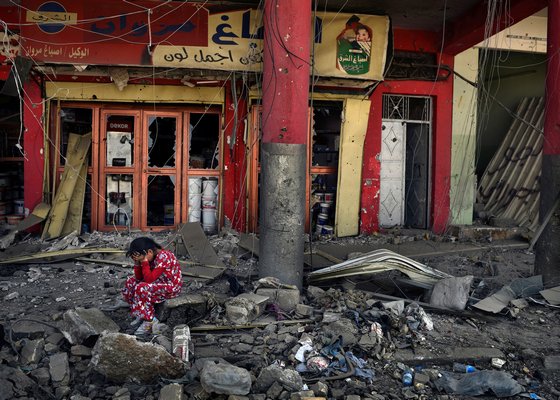 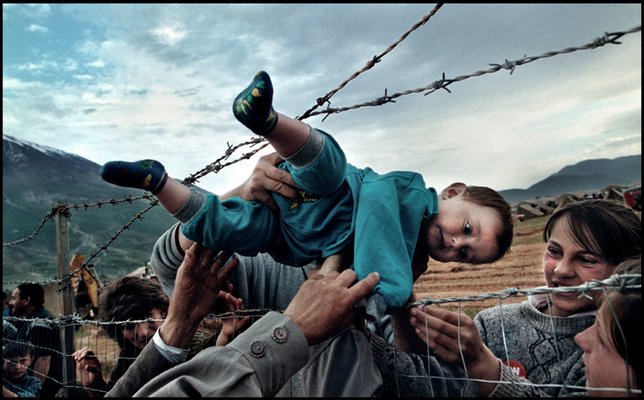 "WAR & INNOCENCE" KOSOVO'S SORROW, ETHNIC CLEANSING Kosovar refugee Agim Shala, 2 years old, is passed through the barbed wire fence into the hands of grandparents at the camp run by United Arab Emirates in Kukes, Albania. The members of the large Shala family were reunited here after fleeing Prizren in Kosovo during the conflict. . (The grandparents had just crossed the border at Morina). The relatives who just arrived had to stay outside the camp until shelter was available. The next day members of the family had tents inside. The fence was the scene of many reunions. When the peace agreement was signed, they returned to Prizren to find their homes only mildly damaged. There were tears of joy and sadness from the family as the children were passed through the fence, symbolic of the innocence and horror of the conflict. (Photo by Carol Guzy/The Washington Post) Kukes, Albania May 3, 1999

As a photojournalist, Carol Guzy has documented an incredible amount of turmoil, upheaval and human suffering in her long career—first for the Miami Herald in the early 1980s, and then, beginning in 1988, at The Washington Post, where she was a staff photographer for almost three decades.Along the way, Ms. Guzy racked up some very impressive accolades, chief among them four Pulitzer Prizes for photography. She is one of just four people and the only journalist to have won that many.

Pulitzer number three came in 2000 with the Feature Photography award, which Ms. Guzy shared with two other Post photographers covering the plight of Kosovo refugees. Finally, in 2011, Ms. Guzy won her fourth Pulitzer, this time for Breaking News Photography when she and two fellow Post staffers went to Haiti to document the aftermath of the massive earthquake there.

On Thursday, August 16, at 7 p.m., Ms. Guzy appears at the Southampton Arts Center for “In Conversation,” a discussion series offered by the Manhattan-based International Center of Photography and led by ICP’s executive director, Mark Lubell.

From the effects of war on civilian populations to natural disasters and the ruthlessness of ISIS, Ms. Guzy has many stories to share from her time documenting some of the most tragic and moving stories from around the world.

Yet despite covering conflicts in foreign countries where her own life is often at risk, it turns out that given the current state of journalism, some of Ms. Guzy’s toughest battles in recent years have been at home.

That’s because the newspaper industry is in a state of flux. Big dailies are gutting newsrooms, cutting loose veteran journalists and photographers as they shift their business models away from in-depth reporting and toward short online posts and reader submissions that garner clicks and, theoretically, profits.

“It’s changed dramatically,” said Ms. Guzy in a recent phone interview. “People said it was going to happen, but it’s worse than I expected. During the golden age, newspapers had real staff and resources. You could spend months on stories with multiple photographers.”

But those days are gone, as Ms. Guzy learned firsthand a few years ago when she took a leave of absence from The Washington Post to care for her dying sister and mother. Despite assurances that her job would be waiting for her when she returned, The Post was sold in 2013 to Amazon.com founder Jeff Bezos. The new management team soon informed Ms. Guzy that, after 30 years and four Pulitzer Prizes, her job was gone.

“The first person they cut is the photographers, and sometimes it’s whole staffs,” she said of the changing newspaper industry. “It’s the questioning of truth. Today, everyone has a voice—even Joe Civilian with a cellphone camera. But they’re not vetted, and everyone believes what they see.

“It’s extremely unfortunate. I hope the pendulum swings back. It’s very discouraging to watch this happen,” she added. “I don’t think the general public can understand the difference between a professional photojournalist and someone with a camera.

“We have a responsibility to be accurate and truthful.”

In addition to the loss of her job and her family members during this period, Ms. Guzy also suffered the loss of her close friend Mr. du Cille, with whom she shared her first Pulitzer Prize. He died after suffering an apparent heart attack in December 2014 while covering the Ebola epidemic in West Africa for The Post. He was 58 years old.

“He was one of those rare breeds with integrity, dignity and grace—all that’s missing in this corporate era,” she said of her friend.

While the last few years have admittedly been challenging ones for Ms. Guzy, both personally and professionally, she now works freelance and has freedom to cover the stories she believes need to be told. Not long ago, she traveled to Iraq with a non-governmental organization to photograph civilian victims of ISIS in Mosul. It’s a difficult story and one that she feels she is able to tell more effectively because of her own hardships.

“Going through this grief increases the empathy. I think it’s a learning experience,” she said. “The more empathy you have, the more compelling the images and you connect with the viewers.

“But it breaks your heart. I have a lot of meltdowns.”

Ms. Guzy is doing more speaking tours these days and she finds this topic comes up a lot as she encounters photojournalists curious about the notion of post-traumatic stress disorder, or PTSD, among those in the profession. While photographers in the field are expected to be “objective bystanders” in witnessing the trauma and suffering of others, she notes there really is no such thing.

“I have so many photojournalists say that they wear this mask of strength. They say, ‘We’re so afraid we won’t get the assignment,’” she said. “Every time I talk to students or any group of people in the profession, they fall in my arms and thank me. They say, ‘I have PTSD and I can’t talk about it.’ But we have to bring up grief and loss and take the stigma away from PTSD.

“Journalists are expected to be strong. They say crying is a weakness … but it’s not. We expect people to open up their lives to tell their stories, but how dare we have emotion,” Ms. Guzy added. “Even seeing beautiful things, your heart will be broken. We see so much of the human condition, it can’t help but affect you.”

“In Conversation,” an International Center of Photography talk with executive director Mark Lubell and photojournalist Carol Guzy, is Thursday, August 16, at 7 p.m. at the Southampton Arts Center, 25 Jobs Lane, Southampton. On Thursday, August 9, at 7 p.m., ICP presents an “Illustrated Talk” with world-renowned National Geographic wildlife photographer and conservationist Joel Sartore. Tickets for each event are $15. For more information, visit southamptonartscenter.org.