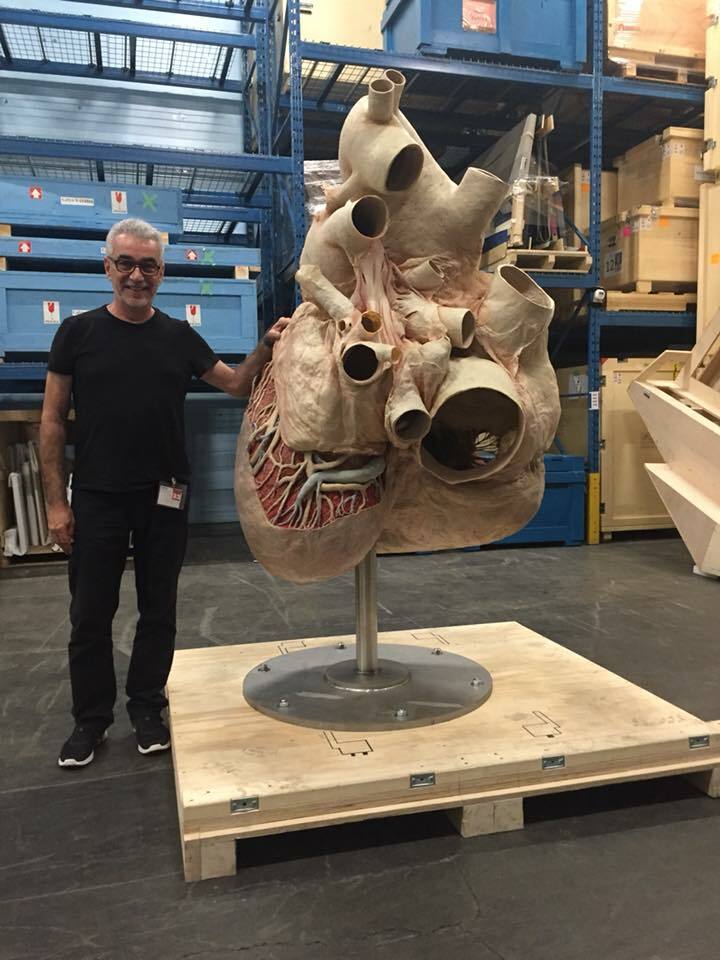 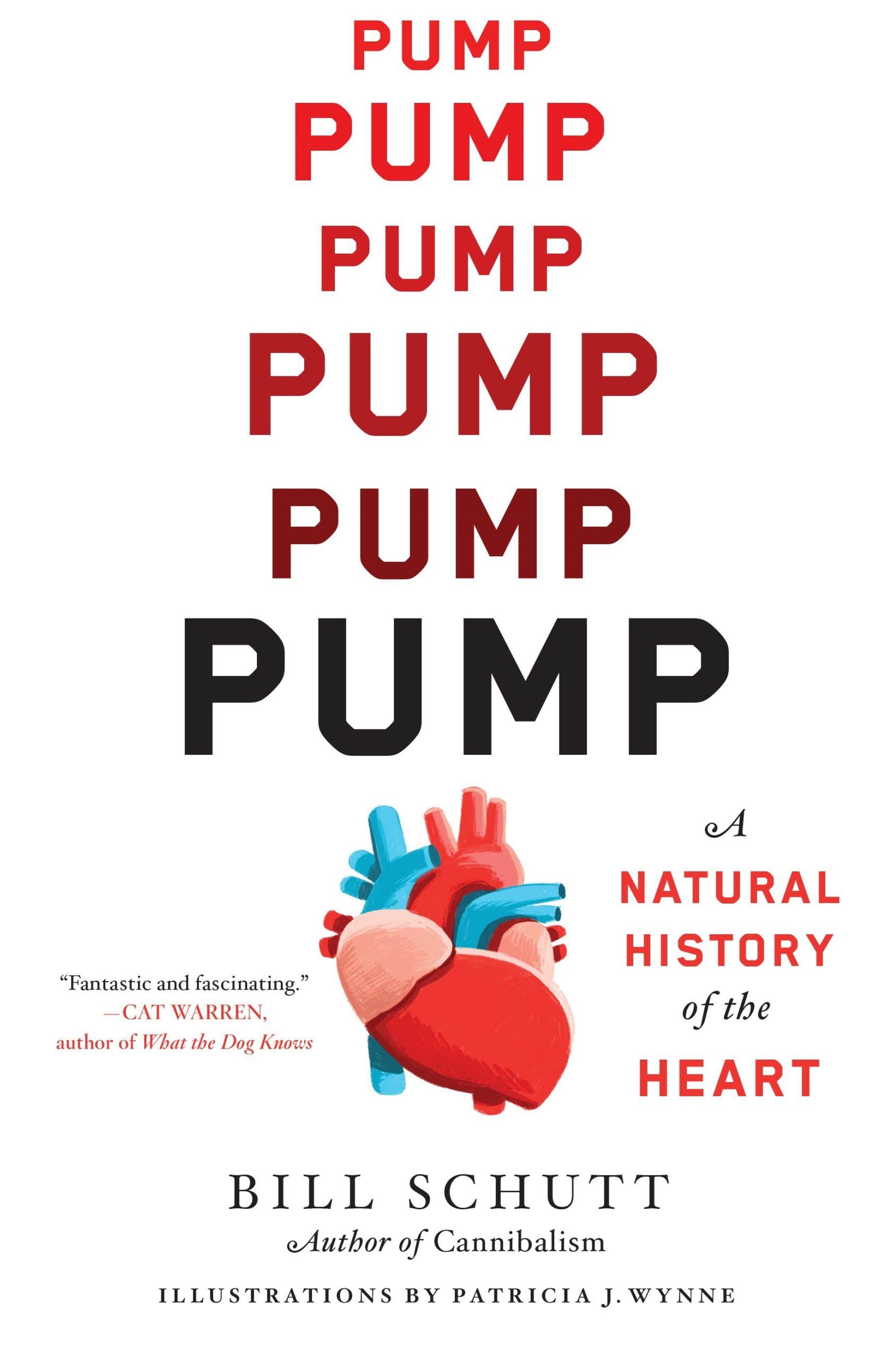 Bill Schutt is the author of "Pump." ¬© JERRY RUOTOLO

You could say that, as an author, Bill Schutt is drawn to unusual subjects. A vertebrate zoologist at the American Museum of Natural History, Schutt has written non-fiction books on several offbeat topics, offering insight and intrigue into the scientific facts of the world around us.

His first book, ‚ÄúDark Banquet,‚Äù (2008), was all about blood-feeding creatures, which makes sense, given that Schutt studied vampire bats for 25 years. Then in 2017, he published, ‚ÄúCannibalism: A Perfectly Natural History,‚Äù (Algonquin Books) a book about ‚Ä¶ well, you know. Incidentally, in the U.K. it was titled ‚ÄúEat Me: A Natural and Unnatural History.‚Äù

‚ÄúIt‚Äôs the gift that keeps on giving,‚Äù Schutt said of his topic.

In between, he also wrote a trio of thrillers that follow the adventures of the fictional Captain R.J. MacCready, a scientific sleuth and, perhaps not coincidentally, a zoologist.

Now, Schutt‚Äôs newest nonfiction book is just hitting shelves. This time, it‚Äôs ‚ÄúPump: A Natural History of the Heart,‚Äù which was released by Algonquin Books earlier this week. On September 28, Schutt will take part in a Zoom book talk with the East Hampton Library.

Schutt, who lives on the East End, has strong ties to the area. As an undergraduate student, he attended Long Island University‚Äôs (LIU) Southampton College for a year and half before transferring to LIU‚Äôs Post campus. He went on to earn his master‚Äôs degree at SUNY Geneseo and his Ph.D. in zoology at Cornell University. Later, as a biology professor, he taught science at both Southampton College and LIU Post, which may help explain why he‚Äôs attracted to the topics he writes about.

‚ÄúI think this spins off the fact that I taught for so long,‚Äù he said in a recent interview. ‚ÄúI like to take complex material people are confused about, like with students and my readers, and turn it into something that makes sense and is entertaining, and there‚Äôs not a lot of jargon.‚Äù

Schutt‚Äôs newest book is all about the heart ‚Äî or more precisely, a lot of different hearts. From the preserved ticker of a massive blue whale that washed up on a Newfoundland shore which he visited in a Toronto museum, to the blue blooded horseshoe crabs whose life-saving qualities just may be killing them, or frogs with a circulatory system that freezes during hibernation, Schutt traverses the animal kingdom exploring the fascinating and bizarre way in which the hearts of a range of animals function. He also delves into human anatomy, examining not only the practice of interspecies transplantation but also exploring exactly how it was that the heart became known as the seat of the soul (hint, you can blame the Egyptians).

‚ÄúWhen looking for a topic for my next book, my agent, Gillian MacKenzie, and the editors at Algonquin, suggested I pick something more mainstream. The heart was one of the suggestions, and I thought there are so many books on the heart out there,‚Äù Schutt said. ‚ÄúBut the kind of book I was interested in writing, was to go through the animal kingdom, explore the myth and mythology then the science from medieval to modern medicine and what takes place in the future.

‚ÄúI didn‚Äôt think it would be strange enough for me, but there were enough interesting and off-beat stories to tell,‚Äù he said. ‚ÄúI‚Äôm trying to educate as well, and I take a lot of side trips, too.‚Äù

One of the stories Schutt visits in the book is the pioneering 1984 case of Baby Fae, a newborn with a fatal heart defect who, shortly after birth, received a baboon heart transplant. The baby lived with the heart for three weeks before she died, not of organ rejection, but rather a blood type incompatibility. The surgeon, Leonard Lee Bailey, faced lots of public criticism and ethics questions due to the experimental nature of the operation.

‚ÄúWalking away, the Baby Fae story really stuck with me in a way that went beyond the tragedy of it,‚Äù said Schutt. ‚ÄúIt‚Äôs an incident that‚Äôs outwardly tragic, but I was really surprised in a lot of the research. If Baby Fae was born now, they would have staged reconstruction surgery and there would be no heart transplant. When Leonard Bailey did the surgery, it‚Äôs not like he was showing off. That baby would‚Äôve died. There were no infant donor hearts at the time.‚Äù

But according to Schutt, in the 20 or so years that followed the Baby Fae case, Bailey and his team at Loma Linda University Children‚Äôs Hospital in California successfully performed close to 400 human-to-human heart transplants.

‚ÄúI think it had a lot of ramifications,‚Äù he said.

When asked to describe the challenges of writing about a scientific topic in a way that engages and entertains everyday readers, Schutt said, ‚ÄúI don‚Äôt find it difficult. I have always been interested in bringing along everybody in the class. I pitch what I‚Äôm trying to teach in a way that‚Äôs entertaining to bring everyone along. I kept that mindset.‚Äù

Schutt also has a collection of esteemed scientists and colleagues with expertise in a range of fields that he can tap into during the course of his research and writing.

‚ÄúTo me, it‚Äôs fascinating and fun and not difficult,‚Äù he said. ‚ÄúThe people I contacted rarely said ‚Äòno.‚Äô‚Äù

On the passionate side of things, Schutt‚Äôs book also explores the origins of the mystery of the human heart in the ways of love and emotion.

‚ÄúIf you were afraid, the heart would change as well,‚Äù he explained, noting that the Egyptians didn‚Äôt think much of the brain and, unlike the heart, didn‚Äôt bother preserving it during the mummification process. ‚ÄúThe emotion and intellect and what we could consider the soul was said to reside in this active, centrally located organ. The Greeks picked up on medicine from the Egyptians and this idea of cardiocentrism ‚Äî that the heart is key when you talk about intellect or emotion.‚Äù

The major Greek and Roman philosophers followed that idea, as well as the writers and artists who made the heart central in their work.

‚ÄúUnfortunately, what happened is it stayed that way for 1,500 or so years,‚Äù said Schutt.

He points to the work of Claudius Galenus (a.k.a. Galen) a second century Greek philosopher and physician who studied and wrote about human anatomy, but by studying the insides of animals, since the use of human subjects for such purposes was forbidden.

‚ÄúSo a lot of what Galen got about physiology was wrong, but he did the best he could,‚Äù said Schutt.

The problem came centuries later, explained Schutt, when Galen‚Äôs anatomical research was adopted by the Christian church in Europe.

Advances in medicine were slow to progress as a result, and even into the 18th century and beyond, the use of medieval treatments like leeches and therapeutic bleeding was standard operating procedure when it came to treating all sorts of illnesses. In his book, Schutt notes that ‚Äúin 1799, a team of physicians drained a total of around 80 ounces of blood from former President George Washington in an attempt to treat a throat infection. This was approximately 40 percent of his total blood volume!‚Äù

Another intriguing fact that Schutt explores in his book is the notion of heart size in relation to its host. While the preserved blue whale heart that he visits at the Royal Ontario Museum is amazingly large, it isn‚Äôt overly so, given the massive size of the animal it once resided in.

‚ÄúYou‚Äôd think the largest creature has the largest heart, but when compared to their size, the shrew or hummingbird‚Äôs heart is four to five times larger than the blue whale‚Äôs heart,‚Äù he said.

That makes sense, notes Schutt, when you consider how many times a minute the hummingbird has to beat its wings to fly, whereas a whale can slow down it‚Äôs metabolism and preserve energy.

There are loads more interesting tidbits and details in the book, and in terms of readership, Schutt thinks ‚ÄúPump‚Äù will have fairly wide audience appeal because it‚Äôs all about the heart, something people are very aware of taking care of these days.

‚ÄúI cover some interesting aspects of cardiac rehab programs, and that material is incredibly relevant,‚Äù he said.

And if that‚Äôs not enough, among his suggestions for things that are good for the human heart? Dark beer, red wine, mediation and yoga.

So go ahead, you‚Äôve earned it.

Bill Schutt‚Äôs author talk on ‚ÄúPump: A Natural History of the Heart‚Äù is Tuesday, September 28, from 6 to 7 p.m. and is sponsored by the East Hampton Library. To register for the Zoom event, email reference@easthamptonlibrary.org or call 631-324-0222 ext. 3.

Things are worn and things wear out ‚Äî socks and rugs; barns and studios. The ... by Meredith Hasemann

The Sag Harbor Masonic Club welcomes Sag Harbor‚Äôs own Chase Allardice for its next concert on Friday, October 22, at 9 p.m. Allardice is a singer/songwriter who has played all across the East Coast backing up various pop and rock artists. For the last few years, he has been performing his own original music to audiences. He writes songs bringing listeners back to both the Greenwich Village folk scene and the Seattle Indie Rock boom of the late ‚Äô90s. He has released one album, ‚ÄúLeft Out to Burn,‚Äù and will be performing songs written for a new release scheduled for ... by Staff Writer