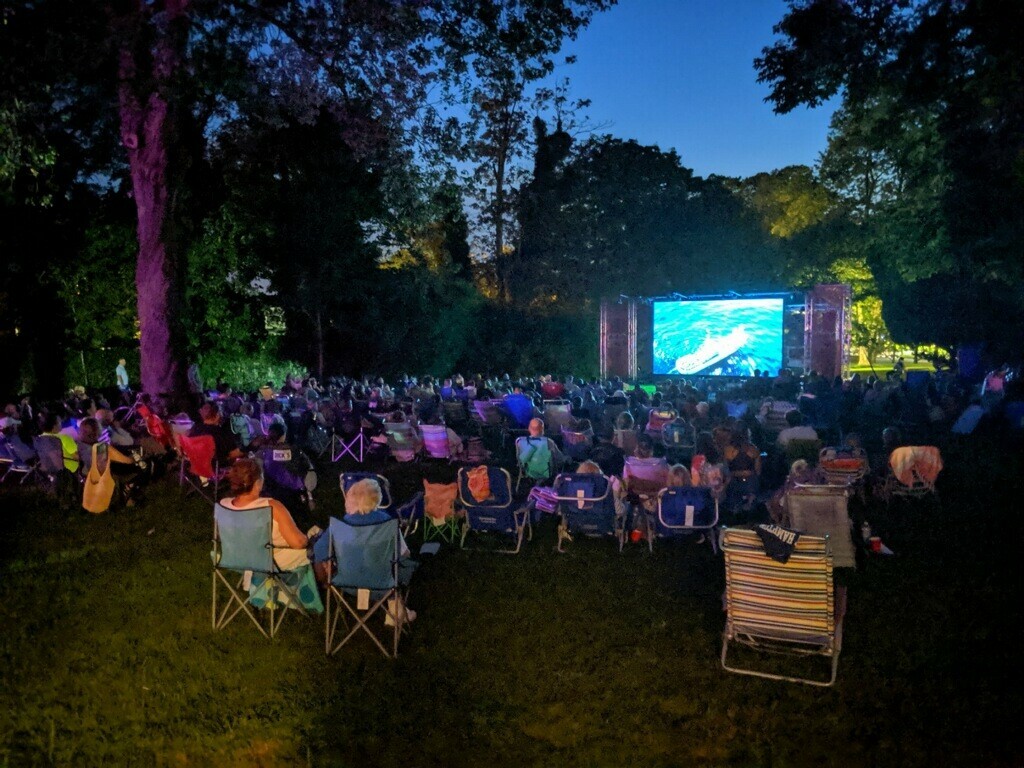 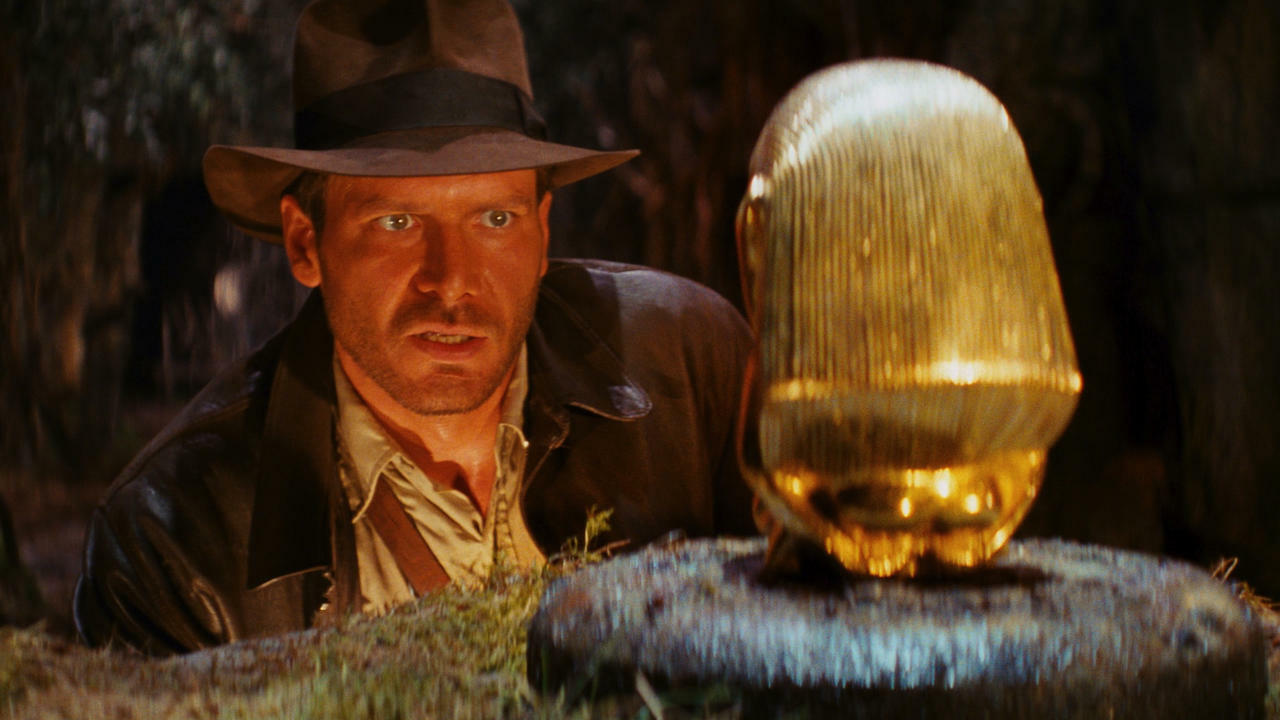 A still image from Steven Spielberg's 1981 film "Raiders of the Lost Ark" which Southampton Arts Center will screen on May 23.

UPDATE: Due to expected inclement weather on May 23, this event will take place on Sunday, May 24 at 8:30 p.m. Tickets are sold out at this time and there is a waiting list.

Consider this: Had the current novel coronavirus pandemic taken hold back in the 1960s or 1970s, many of us would have known exactly what to do to keep our families entertained while maintaining social distancing.

We would have headed straight to the drive-in movie theater, where, with food in the picnic basket and the kids in their PJs, we’d sit in the comfort and safety of our own vehicles while enjoying the latest double feature from Hollywood.

Those of a certain age might remember the Hamptons Drive-In. It was located on Montauk Highway where Bridgehampton Commons is today; as a point of reference, the screen probably sat about where King Kullen is now.

Though it’s been a long time since there was a real drive-in on the East End, it’s a model that is becoming au courant again. Especially since last Friday, when New York Governor Andrew Cuomo gave drive-ins the green light to open as part of getting the state back to business in the wake of the COVID-19 shutdown.

In expectation of the announcement, the Southampton Arts Center was waiting to spring into action — and at sundown on Saturday, May 23, will kick off Memorial Day weekend with a first-rate drive-in movie experience at Coopers Beach in Southampton Village.

Not only is SAC bringing back the nostalgic experience of the drive-in, it is doing so with a cinematic classic: Steven Spielberg’s 1981 adventure film “Raiders of the Lost Ark.”

It’s expected that 75 cars will be able to attend the screening at a cost of $50 per vehicle, paid in advance. The drive-in also will serve as a food drive to benefit Heart of the Hamptons: Attendees are encouraged to bring non-perishable items for the local food bank.

Helping SAC staff to organize the drive-in was Simone Levinson, a founding co-chair of SAC, who, along with her husband, David, also offered financial support to make it happen.

“It’s like we’re going back to the future — even though we’re not screening that movie,” said Levinson in a recent interview.

Levinson anticipates a sell-out car crowd on Saturday and noted that if there is demand, more drive-in movies will follow this summer.

She explained that planning for outdoor movies like this has been a topic of discussion at SAC for a few months now.

“This started back in March, when we saw that people coming together was becoming more and more restrictive,” she said. “But we wanted to find a way to bring the community together, as we have for past eight years using arts and culture.”

Yet there were a lot of questions left to be answered for arts organizations like SAC when the stay-at-home order came down from the governor.

“How do we pivot in this time and do what we do for the community but within the constraints of what’s allowed?” asked Levinson. “We were trying to be nimble, but when the order came down, we thought, what can we do in the spring?”

The answer soon became clear — SAC doesn’t have to be defined by programming within its four walls. That meant programs could be virtual and movies didn’t necessarily have to be offered right at the Jobs Lane property.

“With this past week, we were waiting and watching the numbers. I wanted us to be ready to be able to provide our community with a much needed outlet to reengage and reemerge as a collective,” said Levinson. “We’ve been in our own silos in quarantine for two months … Memorial Day has always been the unofficial beginning of the summer season. We have an opportunity to mark the season and give the community a booster shot reminding them that summer is here.”

Given the current emphasis on precautions, hosting a drive-in as a way to have a safe social experience works on many levels. Maintaining a 6-foot distance is possible, and staying in cars offers a level of protection that outdoor viewing on a lawn wouldn’t.

“We wanted it be something people would be comfortable doing,” said Levinson.

To that end, Levinson and the SAC have worked closely with Southampton Village to secure the use of Coopers Beach for the drive-in, and on movie night are also encouraging people to pick up dinner to go from one of the many village restaurants offering takeout service.

Levinson is happy to be able to organize this first-of-the-season event for the people of Southampton. Giving back has long been a guiding principle for her, and she credits the late Anthony Drexel Duke, founder of Boys and Girls Harbor summer camp in East Hampton, for instilling in her the importance of service.

“I grew up coming out here 45 years ago when my mother was on the board of Boys Harbor,” said Levinson who volunteered at the camp as a young girl. “There are people that touch your life in such powerful ways. Aside from my parents and my grandmother, Tony Duke is right up there. There is not a time when I don’t credit him for being a role model and mentor. He embodied so many values we aspire to. He walked the walk. To be in the presence of that at such a young age was inspirational.

“This event is not producing income. It’s costing us. But we felt it was good to do this as a gift to the community and important to do something that would give families something to look forward to and enjoy,” she said. “When you take being purposeful and do it in a fun way, that, for me, is what fulfillment is all about.”

“We are excited to work with Southampton Arts Center to launch drive-in movies in the village,” said Southampton Village Mayor Jesse Warren. “This will be a phenomenal event for our community, and we are proud to be part of it.”

The Coopers Beach parking lot at 268 Meadow Lane, Southampton, will open at 7:30 p.m. on Saturday, May 23, with the film beginning at sundown, approximately 8:45 p.m. Admission is $50 per car. Attendees will be expected to stay in their cars and follow physical distancing guidelines. The audio will be accessed on the FM dial. Advance reservations required at sacdriveinraidersofthelostark.bpt.me. Attendees must post a printout of their confirmation and put it in their car window or have it on the screen of their mobile phone on arrival.

Let the pros cook for you!

Many local restaurants are open for takeout. Instead of making your own car picnic, show support for one of these village establishments instead: Give them a call and place an order to pick up on your way to the beach for the drive-in.