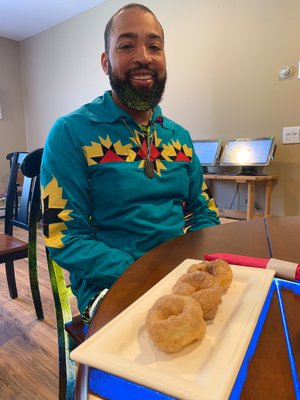 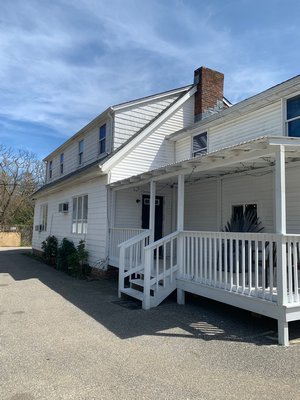 For those in search of a quick bite or a bit of comfort food, a new dining option has opened just west of Southampton Village. Raindrop’s Café, a farm-to-table restaurant owned and operated by members of the Shinnecock Indian Nation, celebrated its official opening over Memorial Day weekend with raffles, tastings and a craft market.

But even a month before its official opening, fans of Raindrop's fusion cuisine, which merges traditional Shinnecock fare with modern favorites were already settling into the café's cozy confines in the white building located behind Raindrop’s Quick Stop on Montauk Highway.

Bryan Polite is the owner of the café as well as the head roaster at Raindrop’s Coffee, which is produced on site at the rear of the building. Deana Smith serves as the restaurant’s operational manager, handling all the front of house operations. Samantha Sosa is the culinary expert in the kitchen and it’s there that she whips up small bites along with soups, stews, sandwiches and salads, many of which are fused with the flavorings and styles of traditional Native American fare—a menu reflective of the food that all three of them grew up with on the reservation.

“It’s fusion,” Ms. Smith explained during a recent visit to the café. “I used my grandmother’s recipes. She passed away years ago and lived on Heady Creek. She would make clam pie, we would go and get the clams ourselves and peel potatoes. We keep it traditional and have added our own recipes.”

Among the unique offerings on the menu is a venison Philly cheese steak, inspired by the fact that Ms. Smith once lived in the City of Brotherly Love.

“It’s marinated venison with onions, mushrooms and cheese,” she said.

“This has been two years in the making,” said Mr. Polite, who comes to the café business after having worked as a police officer for the Mashantucket Pequot Tribe in Connecticut and attending law school for a year.

“I was planning to go back to school, then I got into horticulture and the science behind coffee roasting,” explained Mr. Polite, who uses the same roaster that has been in his family since the mid-1990s. “I fell in love with getting my hands in the earth and watching the expression of people when they enjoy the fruits of your labor.”

In addition to producing the coffee, which is packaged and sold at Raindrop’s Café, Mr. Polite has also operated an organic farm behind the building. While creating locally sourced, high quality dishes is the primary focus at the new restaurant, he notes that Raindrop’s Café is ultimately about making connections with community.

“I wanted to create a place where people can enjoy good food and great conversation. That’s what the coffee is about and I see it as a culture of the region,” added Mr. Polite, who learned the coffee business from his mother, Dianne Vieira. “We want this place to be an educational platform for the outside community.”

To that end, Raindrop’s Café has already become something of a community and cultural hub. In April, the restaurant was the site of a “Game of Thrones” final episode party. In early June, Raindrop’s hosted a meet and greet breakfast event with members of the Southampton Town Democratic Committee and candidates running for local office.

In the months ahead, an outdoor craft fair will be held every weekend behind the café and other happenings are planned for the future. So stop by and see what's cooking!

“We’re excited and optimistic and for this summer,” said Ms. Smith.

Raindrop’s Café is located at 40 Montauk Highway in Shinnecock Hills and is housed in the white building behind the Raindrop’s Quick Stop convenience store. Summer hours are 6 a.m. to 4 p.m. For more information on upcoming events, call 631-287-3200.