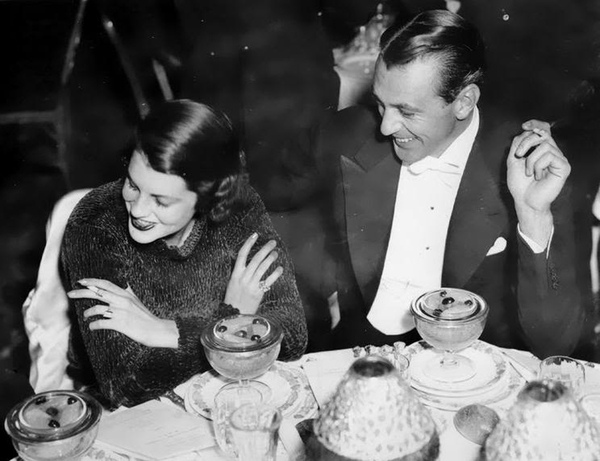 Gary Cooper with his wife, "Rocky." IMAGE FROM "GARY COOPER OFF CAMERA" 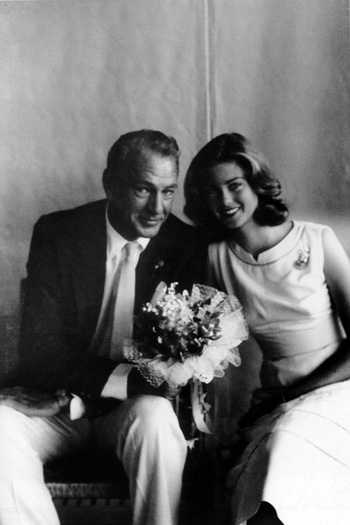 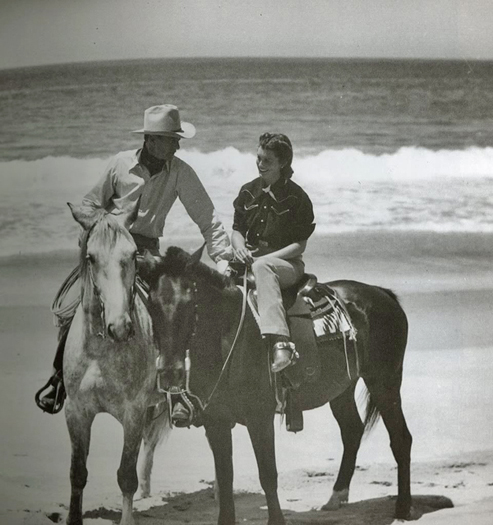 Maria Cooper Janis is putting the finishing touches on a book about her father that will be published this October titled “Gary Cooper: An Enduring Style.”

Along with Humphrey Bogart, Clark Gable, James Stewart, John Wayne and Cary Grant, Cooper is one of the very few actors who remains an icon to generations of movie lovers. He is, of course, associated with Hollywood and he and his family lived in the Los Angeles area for decades. But he could be considered a “local” too because of all the time he spent in Southampton and because he and his wife are buried next to each other in the Sacred Hearts Cemetery in Southampton. Veronica “Rocky” Cooper died in 2000, and the 50th anniversary of Cooper’s death was this past Friday, May 13.

“It’s very nice to have my father there,” said Ms. Cooper Janis, who lives in Manhattan and Southampton and is married to the classical musician and conductor Byron Janis. “That both of us lived on the South Fork was a big reason why my mother and I decided to transport his remains here. It’s lovely at that cemetery. And it’s hard to believe it’s the 50th anniversary of his death.”

Louis B. Mayer, the head of Metro Goldwyn Mayer, once proclaimed that the movies his studio produced “had more stars than there are in heaven.” Inhabiting the constellation of the brightest stars at any studio in his day was Mr. Cooper.

Born Frank James Cooper on May 7, 1901 in Helena, Montana, when his family moved to Los Angeles in the 1920s, Mr. Cooper gave up trying to be an editorial cartoonist and went along. He first found jobs as an extra in silent films (a casting director persuaded him to use Gary as his first name) but then the tall and handsome Westerner earned a breakthrough role in one of the first talking pictures, “The Virginian.”

Mr. Cooper’s career was one of the most admired and celebrated in Hollywood. He won two Best Actor Academy Awards—one for “Sergeant York” and the other for “High Noon.” His best work can be found in such other classics, such as “A Farewell to Arms,” “Mr.

Deeds Goes to Town,” “Friendly Persuasion,” “Ball of Fire,” “The Westerner,” “Love In the Afternoon” and “Pride of the Yankees.”

He was the rare major American actor who was a powerful presence in dramas and action movies and who also had a deft touch in comedies. Mr. Cooper received a third Academy Award recognizing his entire body of work, in April 1961, but he was too ill with cancer to attend that ceremony. The golden statuette was presented to family friend James Stewart who, his voice choked with emotion, accepted the special Oscar on his fellow actor’s behalf. A few weeks later, on May 13, 1961, the legendary “Coop” died of cancer.

From early in his career, the actor came to Southampton, Ms. Cooper Janis explained, because he married Veronica “Rocky” Cooper, née Balfe in 1933.

“My mother’s family has long ties to Southampton,” Ms. Cooper Janis said during a recent interview from her home in Manhattan. “My mother’s stepfather was Paul Shields [a Wall Street financier]. When he and my grandmother married, they built a house on Ox Pasture Road, in the 1920s. So from about the age of 10 on my mother grew up there, spent every summer there. She was very close to her family, so when my father married her, he would regularly visit his in-laws here. After I came along, I remember that we would spend at least a month in Southampton, and preferably two. Our memories of the area are all wonderful.”

Southampton wasn’t necessarily the most convenient place to be for Mr. Cooper. Unlike some popular actors today who work when it suits them, he, like most of the top actors of his generation, made one movie after another. Many were shot in Hollywood sound studios, while others were lensed on location, requiring the actor to be away from home for weeks at a time.

But Mr. Cooper always had Southampton on his itinerary. One reason was quality family time, his daughter said.

“Depending on his shooting schedule, we would carve out time to spend in Southampton,” Ms. Cooper Janis recalled. “We all loved it there. The rest of the year we were in Los Angeles. When he was home or wherever we were we always made time to be together as a family. But when we were in Southampton, my father wasn’t working at all, so it was extra special family time, a very good gathering place.”

Another reason was that Cooper felt genuinely connected to the area, according to his daughter.

“He loved the land out there, the wildlife, the ocean. He just adored the area. He liked going to the Southampton Beach Club. He played lots of tennis with my mother and others there, including Sydney Wood, the great tennis player, whose wife was a childhood friend of my mother. Anything to do with sports, he enjoyed. My father played some mediocre golf too. He loved swimming and digging for clams and eating the local lobster, fishing, all that good stuff.”

Today, of course, the Hamptons are associated with actors, directors and others in the entertainment industry. But that was also true in the 1940s and 1950s, at least in Southampton. Ms. Cooper, née Balfe, was photographed in 1947 here with a dashing Clark Gable. In 1949, Life Magazine sent a photographer to Southampton for summertime shots, and among them is an outdoor dinner party that included the Coopers and Mr. Stewart and his wife, Gloria.

“Gloria and Jimmy Stewart were close friends of my parents,” Ms. Cooper Janis recalled. “In fact, after Gloria’s divorce, my parents introduced her to Jimmy because she was an old friend of my mother and my father had been his friend for a lot of years. They got married, Jimmy adopted her two boys, and they remained married the rest of their lives. The Coopers and Stewarts loved to get together, and it was a thrill when Gloria and Jimmy came east to Southampton. Jimmy has been portrayed as a wonderful man and that is exactly what he was. He was absolutely a dream, a sweet and funny guy, a droll sense of humor. There was a lot of laughter when we all got together, especially in such a relaxed setting as Southampton.”

When visiting Southampton, Mr. Cooper was a man about town, but not necessarily in the party sense. He enjoyed patronizing local businesses while running a few errands, Ms. Cooper Janis said.

“My father’s favorite thing to do was go to Crutchley’s Crullers, a bakery about a half a block from what is now the Golden Pear in Southampton. He loved the crullers there, some secret family recipe,” Ms. Cooper Janis recalled. “He shopped at Shep Miller, he loved Shep Miller’s clothes. He liked to stroll and do his own shopping. He became such a regular there that no one bothered him or treated him like a movie star. He’d tell people, ‘Call me Coop,’ and they did.”

Moving Mr. Cooper from Holy Cross Catholic Cemetery in California to Southampton was the right decision, Ms. Cooper Janis said. She said she feels especially pleased with the move when she encounters someone here with a fond memory to share of her father.

“Just last year my husband was doing a book-signing at the Cinema Arts Centre in Huntington and a woman came up to me and said, ‘I remember meeting your father once. I was in line at the Southampton movie theater, and I glanced aside and he was standing there in line like everyone else, waiting for a ticket,’” Ms. Cooper Janis said. “There was nothing like, ‘I’m a big star, let me in before everyone else.’ That’s the kind of person my father was. He felt at home there.”