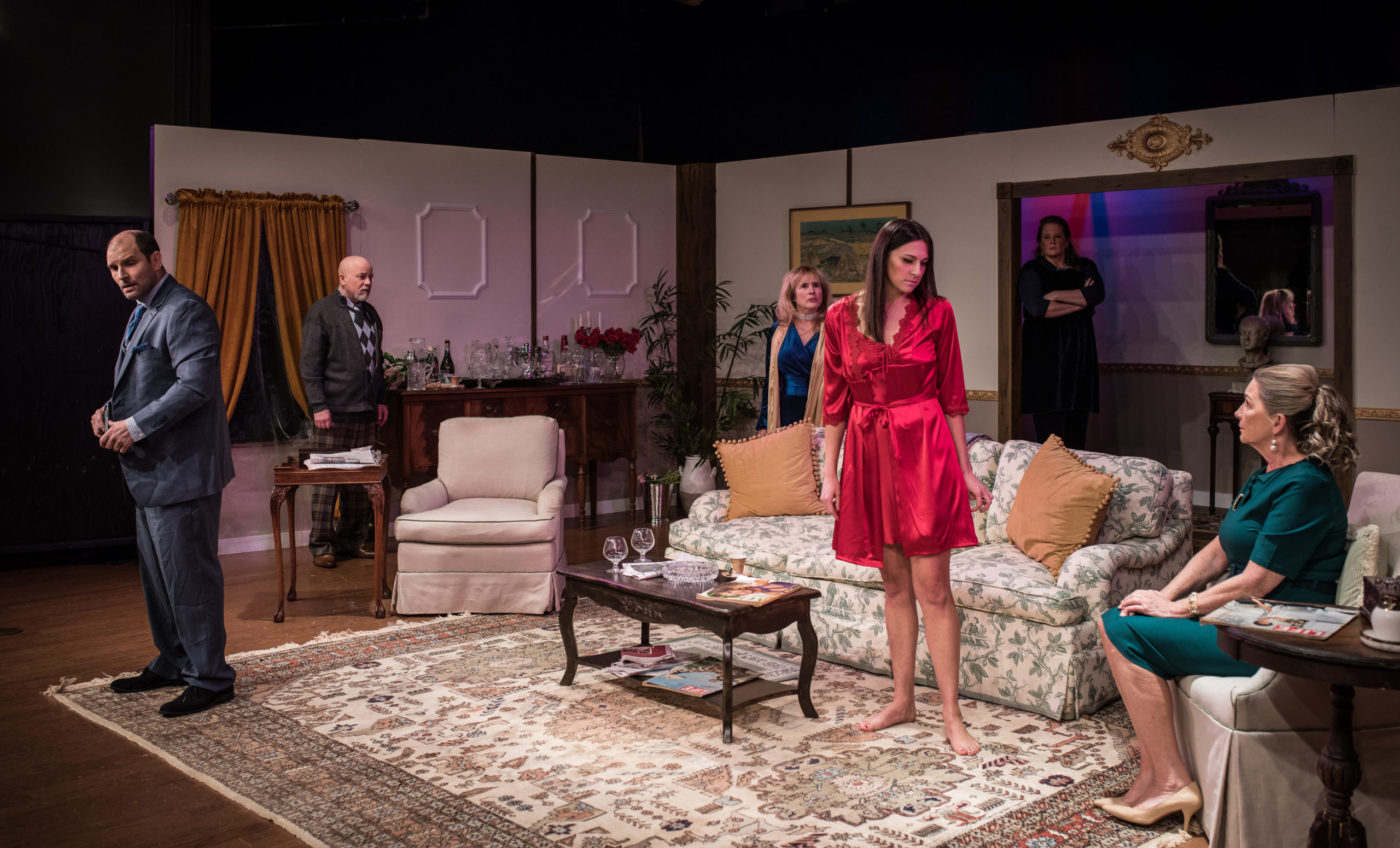 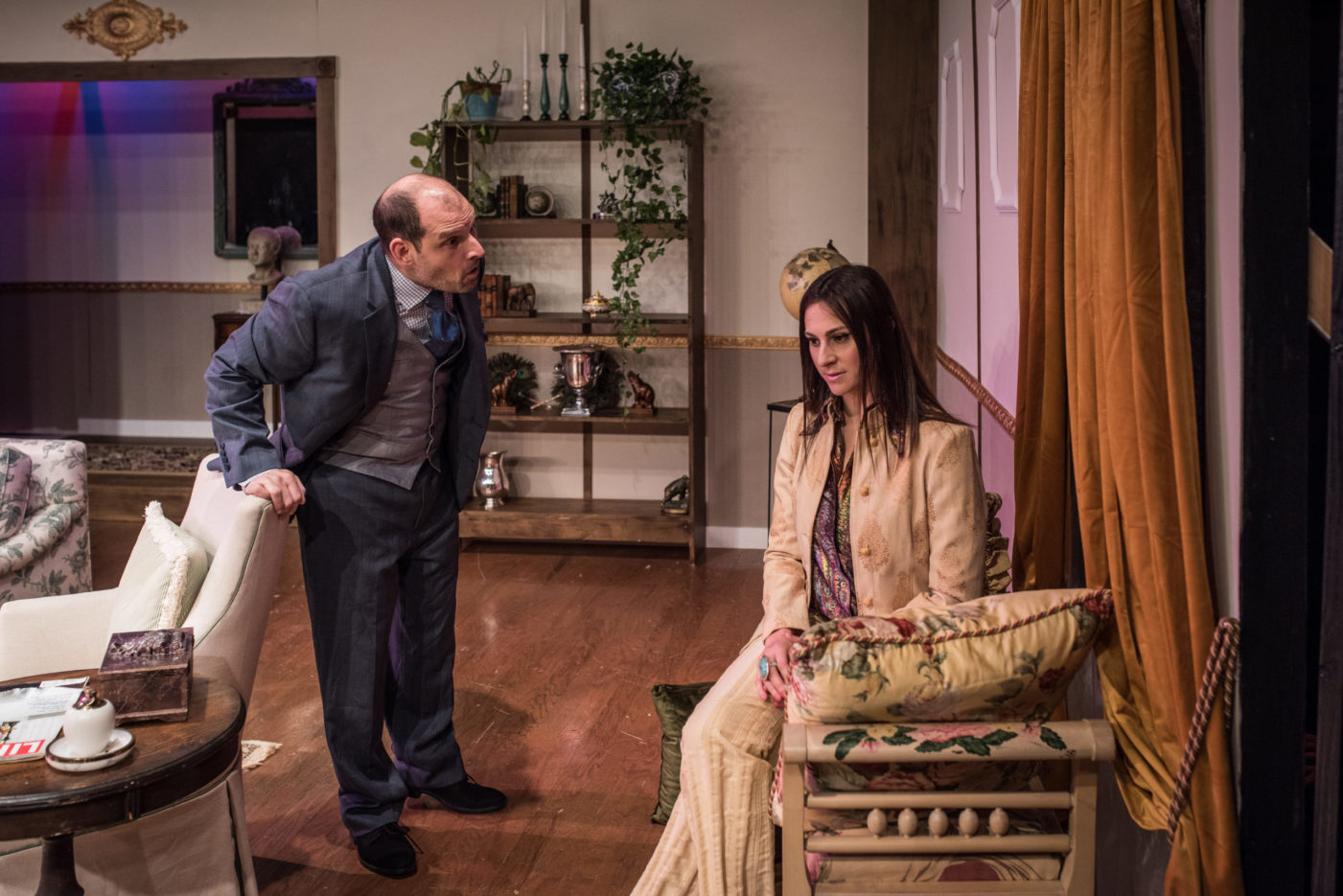 John Leonard and Tamara Salkin as Tobias and Julia in Edward Albee's "A Delicate Balance" at SCC. DANE DUPUIS 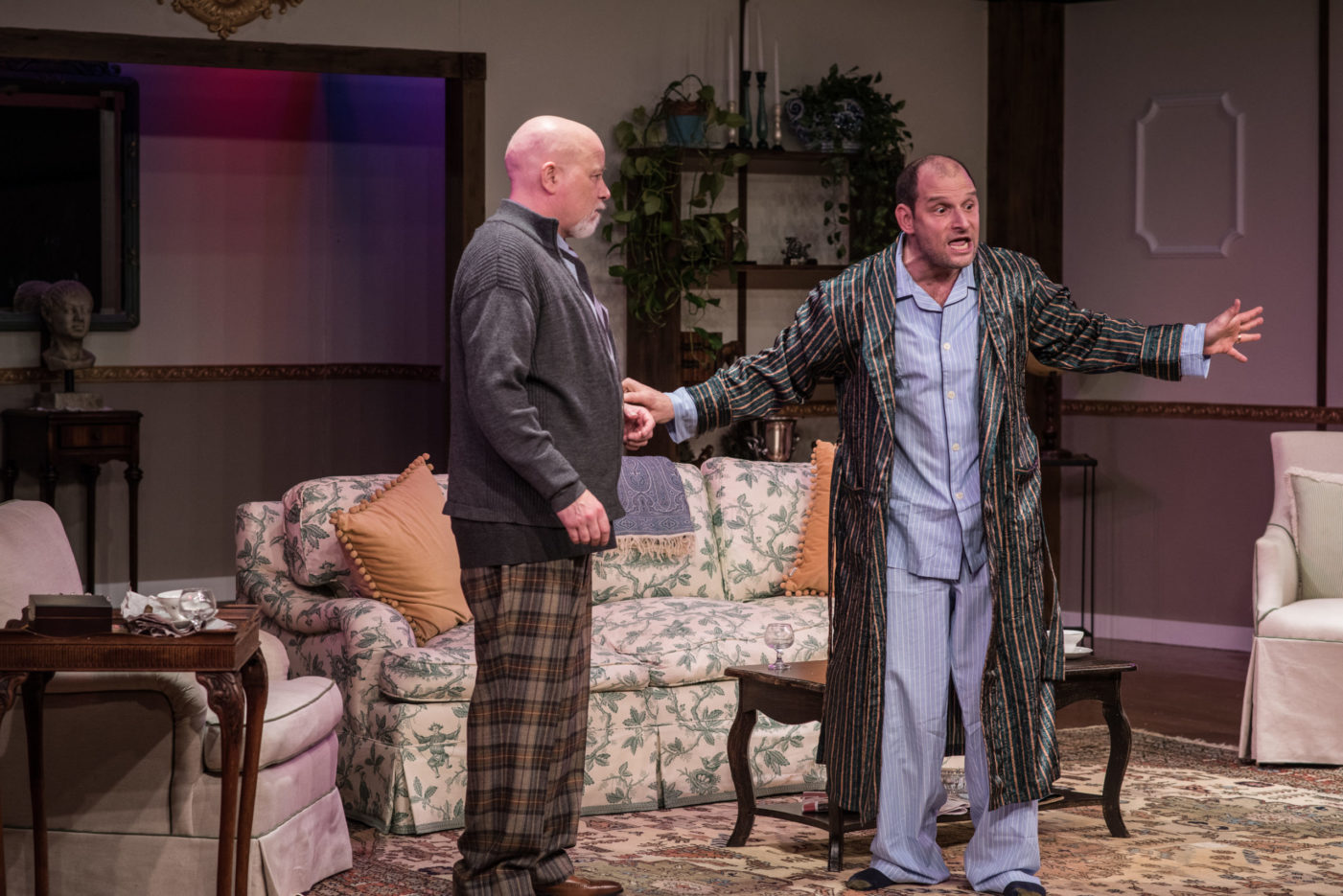 So, what are the fears that keep you up at night?

Maybe they center on the endless “what ifs” of aging and the inevitable loss it brings in terms of health, finances, life-partners or one’s own mind.

Or perhaps you’re more prone to lie awake in the predawn hours fretting about the past — reliving those moments of angst and regret in the form of chances and children lost, opportunity squandered and love unrequited.

The theme of fear and the crippling effect it has on relationships is primary and palpable in “A Delicate Balance,” Edward Albee’s 1967 play which is currently enjoying a three-weekend run at the Southampton Cultural Center (SCC), thanks to a capable Center Stage cast working under the direction of Joan M. Lyons.

This is not an easy script and these actors do amazing work with the material. Filled with complicated language, subtlety of emotion, various twists and introspection, it’s also a long play. Yet it speeds by seemingly in a flash thanks not only to Albee’s dense and pointed plotline, but also the well-considered blocking and the strong chemistry of the six actors who populate the production.

Set in the period in which it was written, the action takes place in the nicely appointed home of Tobias (John Leonard) and Agnes (Bonnie Grice), a wealthy couple living in an unnamed northeastern town that feels a lot like it’s in Connecticut. Also living with them is Agnes’s sister, Claire (Kristin Whiting), and we learn that soon to be joining them will be Julia (Tamara Salkin), Agnes and Tobias’s 36-year-old daughter who has a habit of returning home whenever one of her marriages breaks up, which is often.

Like many a mid-century modern American family worthy of a Cheever novel, this one is an absolute mess. Agnes and Tobias don’t sleep in the same room and apparently haven’t for years, Claire is a drunk (because alcoholics have to go to all those meetings), and Julia is in the midst of failing in her fourth marriage.

That’s when things get complicated.

Enter Edna (Joanna Mincarelli) and Harry (Scott Wilson), Agnes and Tobias’s best friends who show up unannounced on their doorstep. It seems that a mysterious terror has driven them from their own home, and while we’re unsure what it is, what is certain is that after spending the night, they expect to move in permanently. After all, that’s what friends are for, right?

What ensues along this plotline is a study in tribal dynamics. Sure, we welcome friends warmly into our home and ply them with food and alcohol (and in this house there is plenty of it, as evident by the well-stocked bar stage right and the fact that virtually every scene involves a drink … or two … or three). But there comes a time during every social visit when yawning and the checking of watches transmits the hint that it’s time for our good friends to be heading home.

Usually, they do. But Edna and Harry have no intention of leaving, much to Julia’s chagrin, since they are occupying her childhood bedroom.

As Julia, the petulant daughter, Salkin is a veritable powerhouse. Her icy presence, haughty demeanor and fabulous mod outfits brighten the stage like a spark to kindling. Her very being adds a level of tension and fun to the scenario in that virtually every well-timed and cutting quip speaks to the truth of the situation. She is not afraid to call out Harry and Edna as unwelcome interlopers, despite the fact they are her godparents. Nor is she afraid to lift the veil on her parents’ own screwed up relationship, or point out the shortcomings of her wasted Aunt Claire who, as portrayed by Whiting, adds a comedic touch of candor to the seriousness at hand, as only someone who drinks too much can.

Then there’s Tobias, Agnes’s long suffering husband who, as played by Leonard, is astounding. Surrounded by a legion of strong-willed and contradictory women, he goes through life in something of a bubble. Lonely, introspective and often circling the action on the periphery, like Pluto at the edge of the solar system, he nonetheless feels deeply and in many ways is the most sympathetic and interesting character on stage.

A Peter Pan-like quality dominates all the characters in this play, save Agnes, who considers herself the fulcrum maintaining the delicate balance in the household, both figuratively and literally. In her portrayal of Agnes, Grice is to be commended for the serious heavy lifting she does as the long-suffering mother figure among a group of adult children, none of whom could survive without her … or perhaps Agnes is just an enabler of the sort typical of the era.

In truth, this is a collection of people who are totally lost and have forgotten how to take care of themselves — if they even knew how in the first place. Alcoholism, madness, failed marriages, lost lives are what they know.

There’s a telling scene when Tobias recalls an old cat he once had. A cat that, after more than 15 years, stopped loving him. One day for no apparent reason, it would no longer purr in his presence or sit on his lap. It was, he notes, a virtual withdrawal of love which still angers him given that he had done nothing to warrant it. It’s a tale that parallels the relationship that can be found in the separate bedrooms he and Agnes now employ in their lives. Unspoken things happen in the dark that drive wedges between what once was love and Tobias has a surprising moment near the end of the play in which that cat resurfaces in a new form.

Ultimately, the issues broached in “A Delicate Balance” speak volumes about the dysfunction of upper middle class America, particularly in the 1960s when such topics were tactfully avoided in public. How lonely a house full of people can feel in the pre-dawn hours when our fears are at their greatest.

And the unnamed terror that brought Edna and Harry to this house in the first place? Like most things in life, that, ultimately, is our own to define.

Center Stage at Southampton Cultural Center presents Edward Albee’s “A Delicate Balance” through Sunday, January 26, at SCC’s Levitas Center for the Arts, 25 Pond Lane, Southampton. Shows are Thursdays, Fridays and Saturdays at 7 p.m., and Sundays at 2 p.m. General admission is $25. Brunch and dinner theater packages are available at several local restaurants. Learn more at scc-arts.org or 631-287-4377. Reservations are encouraged.