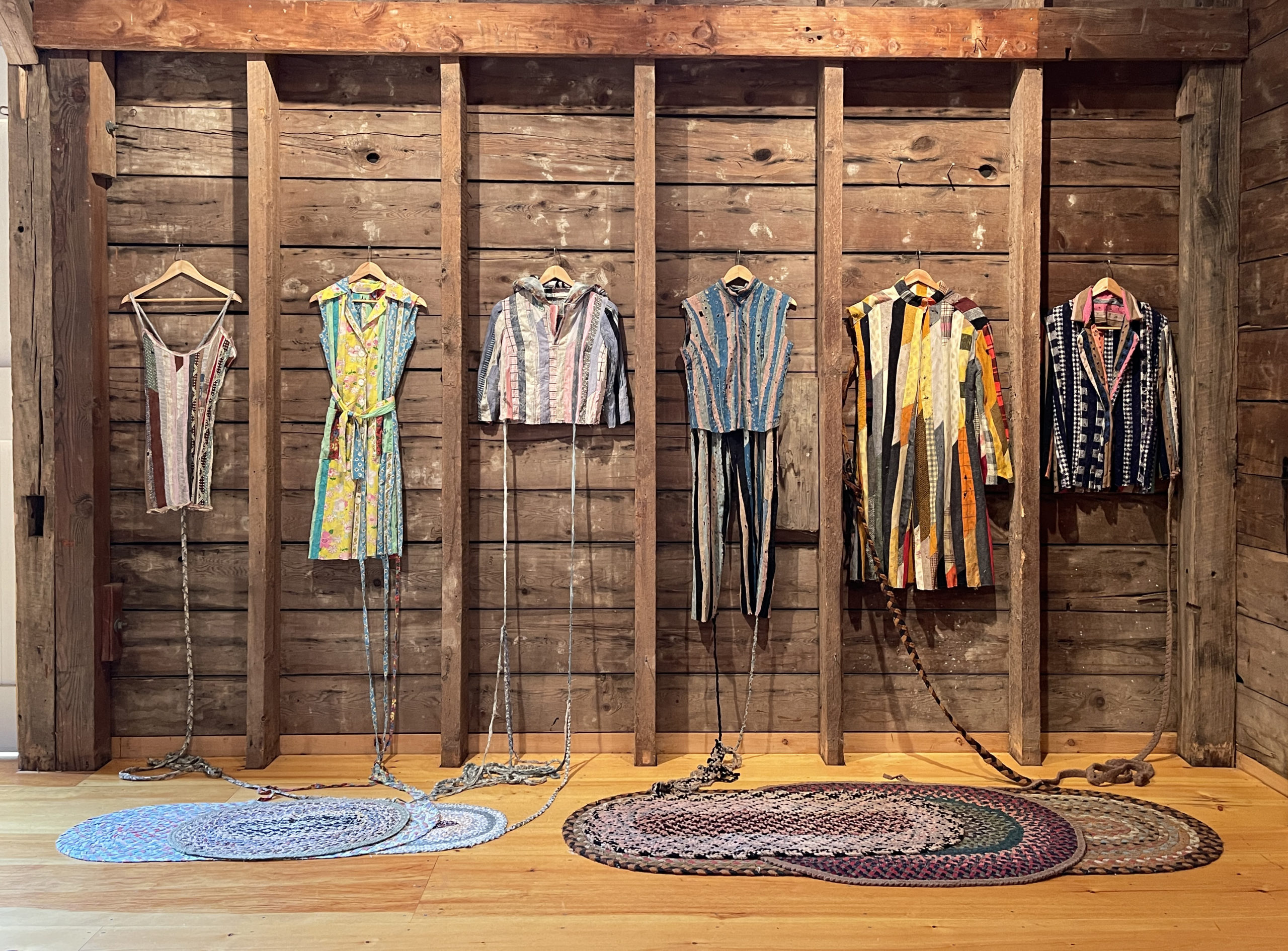 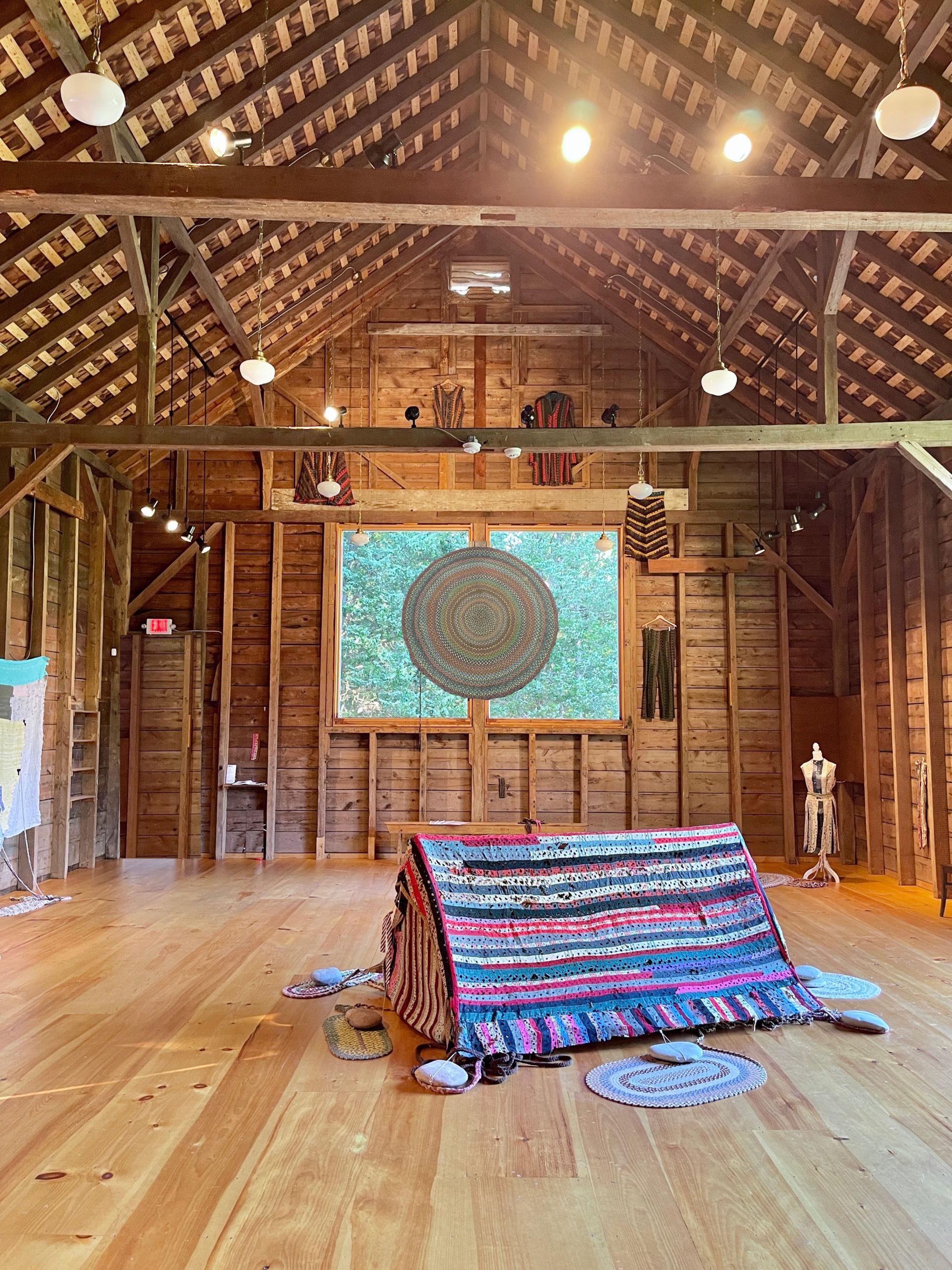 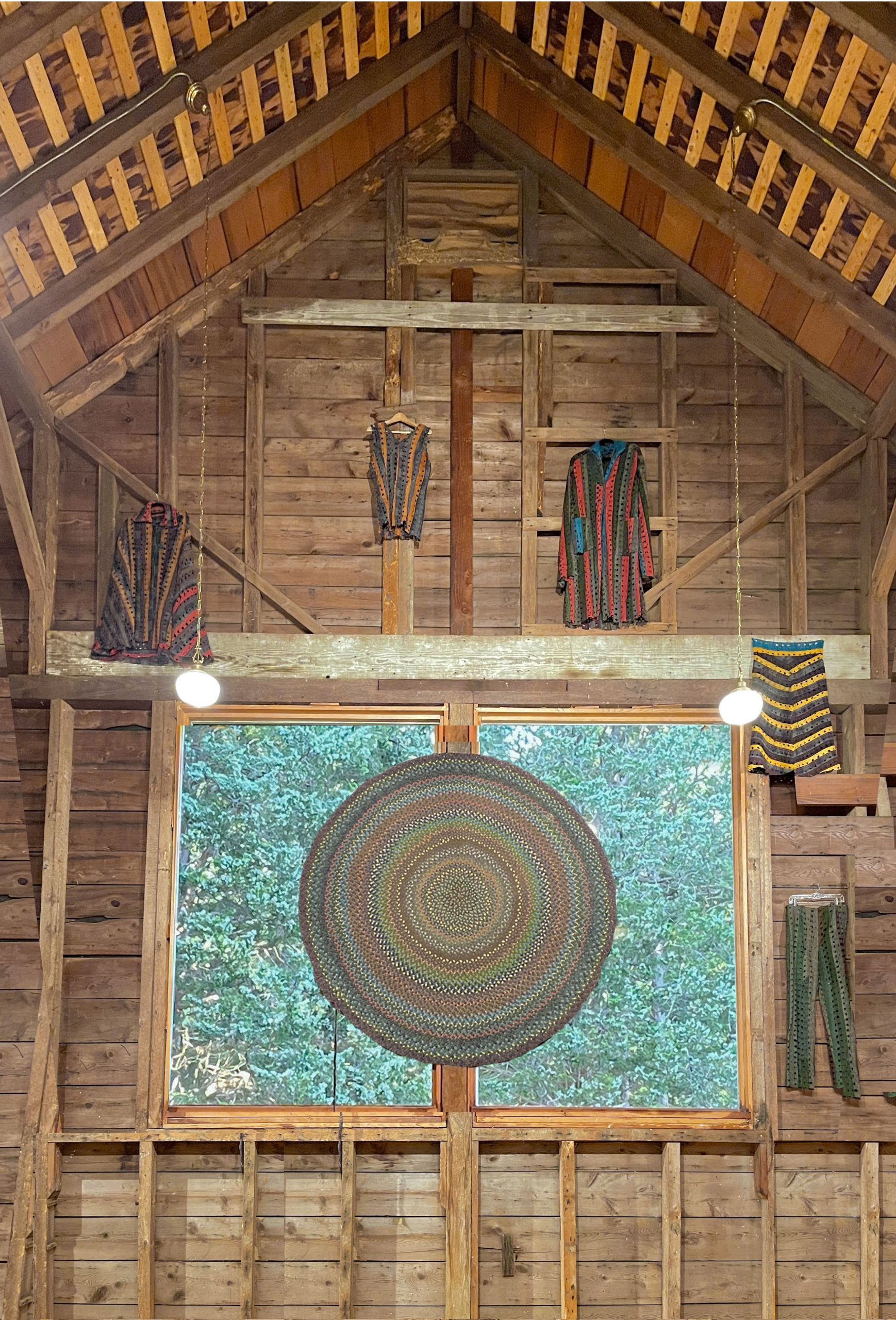 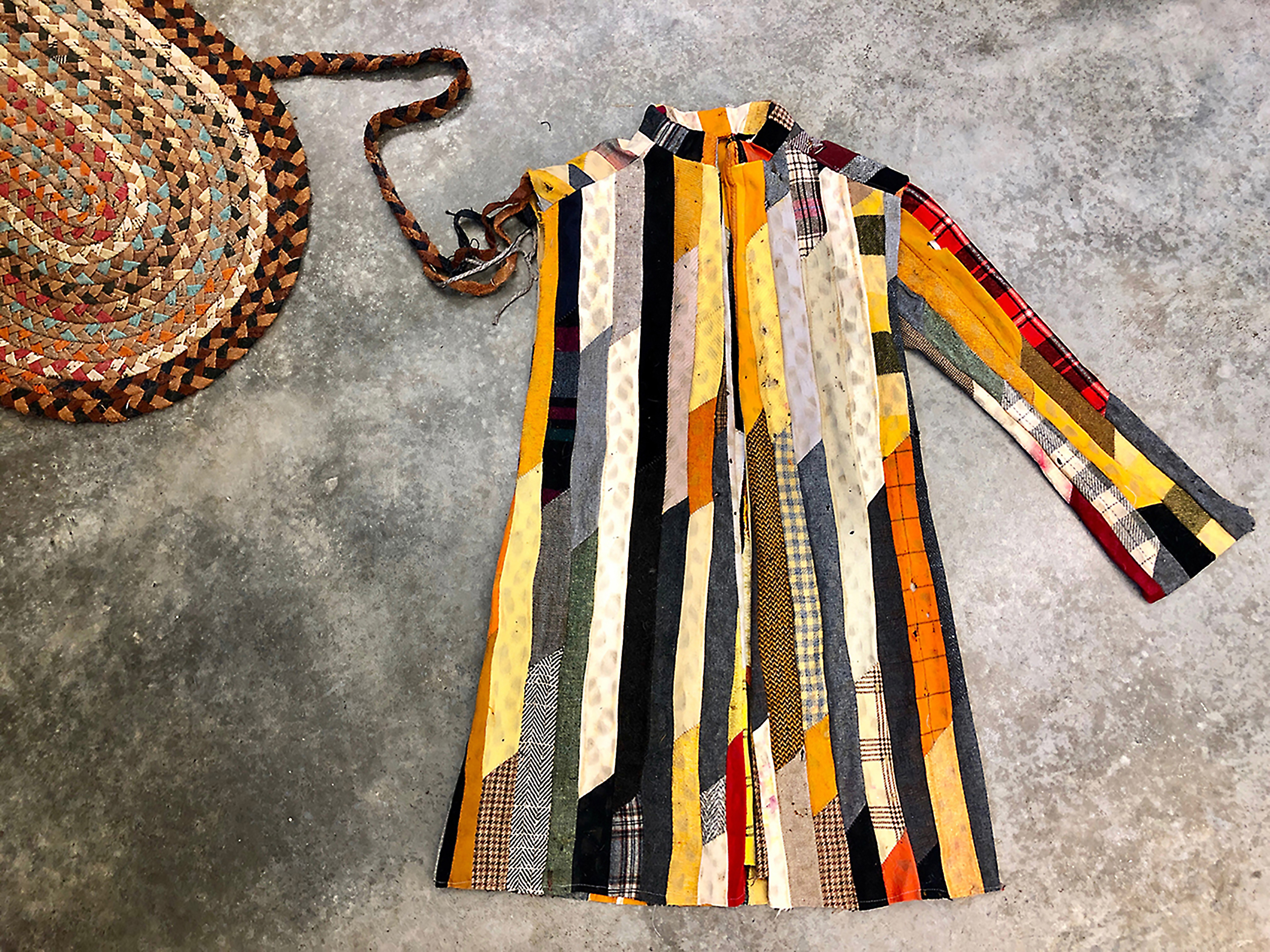 Things are worn and things wear out — socks and rugs; barns and studios. The latest installation at the Arts Center at Duck Creek Farm, “Elizabeth Duffy: Wearing,” is about storytelling: What we reuse, how we repurpose, and how we re-imagine. It is not only Duffy’s current collection of stories, but the entire project of Duck Creek itself that is in conversation with past, present, and future.

I wanted to see the installation since I read about it in The East Hampton Star. My mother, 81 years old, was an artisan when I was growing up, sewing dolls, quilts, and pillows out of scraps of fabric. She created stories with thread and cloth. Her father was a comic book illustrator, telling tales with pen and ink. I opted for nouns and verbs. She was visiting, and I figured we might like this exhibition about the transformation of materials.

It was a rainy Sunday. The sky was threatening, the rain misting, the trees whispering. Inside, my attention was pulled to one circular rug hanging in a window of the space. Garments gathered around it like ascending figures circling a rose window. The effect was a textile version of a stained glass cathedral piece, and it set a confessional tone for the old barn that became a studio that is now a gallery. And the clothes that became rugs that became Elizabeth Duffy’s installation. There are a lot of stories to be told between the barn and the artwork.

There are people behind it all. Yesterday, my parents and I passed around old family photographs. Sometimes we laughed, but sometimes we struggled to identify the people or their names. This exhibition was a lot like that. We don’t know the people who wore the socks that became rugs. And we never met the hands who stitched them together. But we are now.

My mother likes to claim that she is the only non-artist in a family of artists. I think Elizabeth Duffy would beg to differ. The nameless people who made the socks followed by the unsung people who made the rugs are part of the story. When Duffy unravels the rug, history, stories and art live in the coils before she even begins.

The space itself that the work is housed in was owned by the artist John Little, one of East Hampton’s many abstract expressionists. In quarantine, my son studied all about our local artistic heritage with a small group of students attending the School of the Art Institute of Chicago remotely. George never told his Chicago professor he was actually Zooming from Springs when they spoke about Pollock, Krasner, de Kooning. For another class, George created a duct-tape knock-off of one of Helmut Lang’s wallets. After viewing this exhibit, I learned that John Little’s family eventually sold his property to Helmut Lang, the last private owner before the town bought it.

In Elizabeth Duffy’s “Wearing,” old stories are reborn and add to the story of the larger space. The building at Duck Creek was eventually purchased by East Hampton Town and re-birthed. The intelligent, engaging, and enthusiastic docent, Justin Leon Munoz, an artist himself, told us Little had likely widened the door to get his paintings out. Plus, that wall hosts a window that was probably never in the original barn. It brings in a lot of light, something the abstract expressionists all loved about Springs.

I discovered the ghosts of unraveled threads with my mother while examining Duffy’s “Wearing Yardage/Blue Stripe,” 2020. The repurposing was so rhythmic as to be almost a drumbeat in the fabric of the work. Pieces like “Wearing/19th c. dress, with slippers and purse,” 2021 and “Wearing/Tent,” 2020 revealed rhythmic holes in their unraveling. My mother said it looked like eyelet. Justin told us that the holes in the fabric were from “kicks,” or treads from when the ghost-shoes hit cloth. The rain beat acoustics on the ceiling of the old barn. Following the green thread down the umbilical cord, I could see the green stitching in the rug the garment had been birthed from. It was worn.

I picked up a catalog and noted that Duffy had shown at Rhode Island School of Design (she teaches at Roger Williams University). My brother attended RISD before an untimely death. As the sky threatened rain outside the barn doors, I realized that this exhibition was a conversation about stories. Each piece in the installation contained at least three generations of work. I looked at the rose window and listened to the beating rain, and thought about the silent artists in my life.

My mother asked Justin about the selection and installation process. He mentioned Duck Creek’s executive director, Jess Frost. My mother and I exchanged surprised glances. Wasn’t that an old friend of mine, her eyebrows asked?

I am an English teacher and a writer. When we were young, Jess and I were waiters. We worked together, cried together and commiserated together about art, life and food for years. We were artists, repurposed as restaurant workers while we found our footing. We knew local food and wine before it was “a thing.” These are the real stories. We were the unsung workers behind your four star East End dining experience. Our space in this world, between the stories of art and food, are as symbiotic as the barn and this exhibit at Duck Creek. Elizabeth Duffy’s stories are worth being re-told. And so are the stories of Springs.

Meredith Hasemann is a published writer and English teacher living in Springs. “Elizabeth Duffy: Wearing,” remains on view through October 23 at the Arts Center at Duck Creek, 127 Squaw Road, East Hampton. The Gallery is open Thursday through Sunday, 2 to 6 p.m. and by appointment. For details, visit duckcreekarts.org.