Review: 'The Little Mermaid' At SCC Is Sheer Delight For The Kids And The Adults - 27 East

Review: ‘The Little Mermaid’ At SCC Is Sheer Delight For The Kids And The Adults 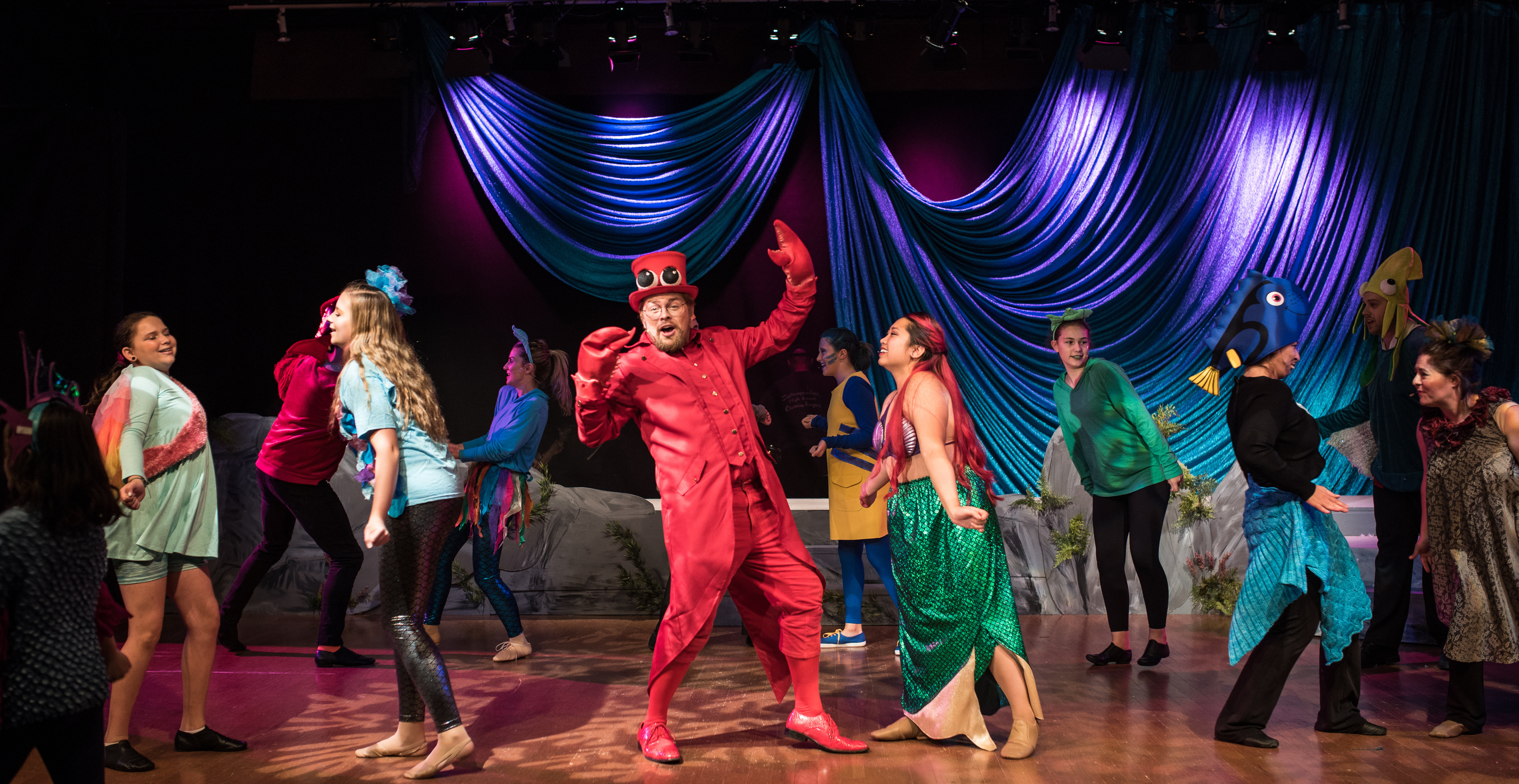 "The Little Mermaid" with Adam Fronc as Sebastian the crab and Hannah Faye Huizing as Ariel. 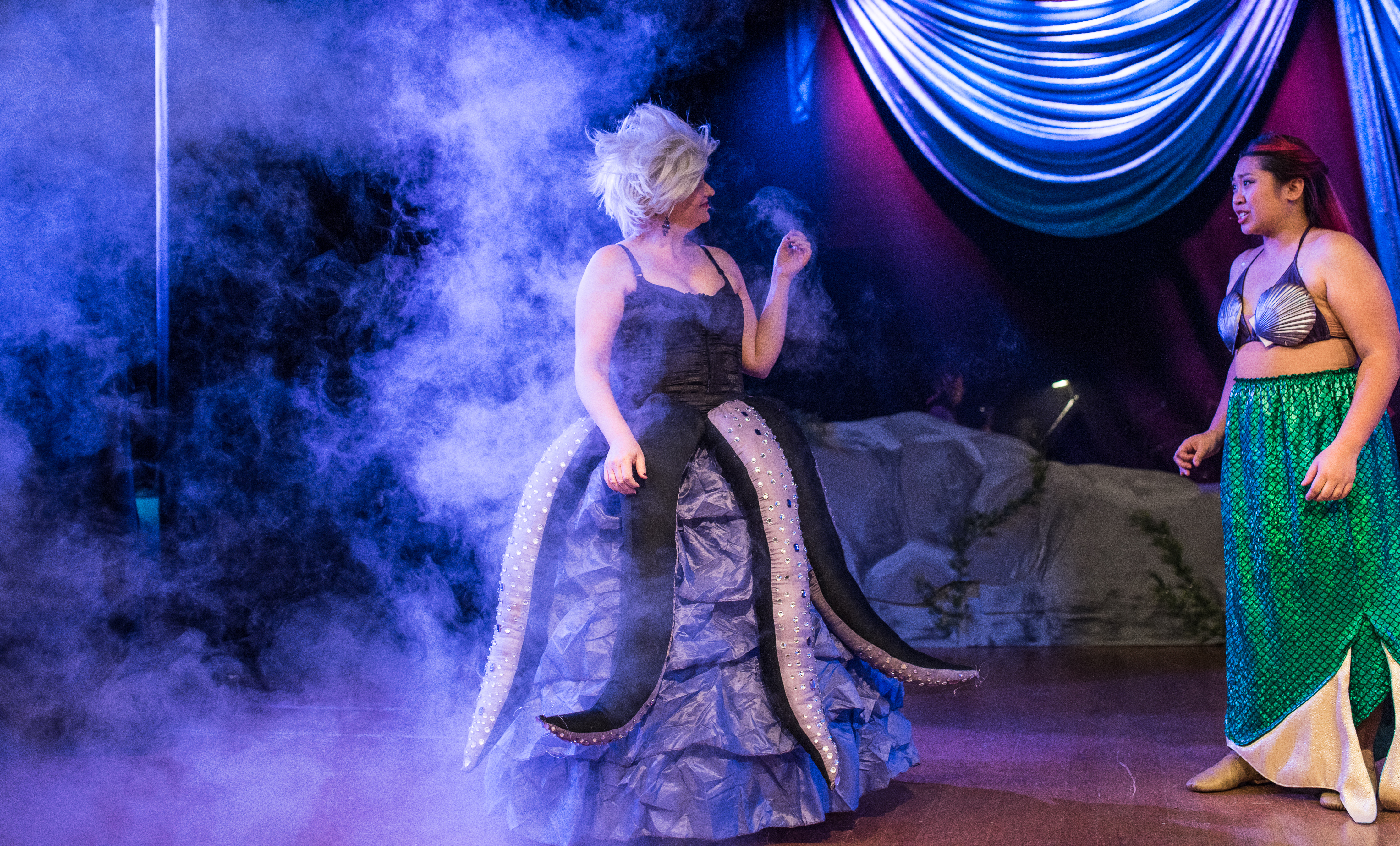 "The Little Mermaid" with Kimet Speed as Ursula the Octopus and and Hannah Faye Huizing as Ariel the mermaid. DANE DUPUIS

A rebellious teenager with burbling hormones, a chance meeting with a prince when she just happens to save his life, a raft of amusing friends, an evil witch — all the plot points of a Hans Christian Anderson tale by way of Disney come together in the Center Stage production of “The Little Mermaid” currently running at the Southampton Cultural Center.

Yet since the nubile teenager is a mermaid with a tail, and the prince a human with legs (who conveniently loves the sea), choppy waters ensue, as dating outside your species is always inconvenient. Especially when one’s disapproving father happens to be the Triton, King of the Sea, and the mermaid in question is his youngest daughter Ariel, with a musical gift that will surely be her downfall.

Never mind, of course true love succeeds over such troublesome odds — this is a fairy tale, after all. Under the sprightly and strong direction of Bethany Dellapolla the cast of 20 brings the show to its energetic happy ending exuding warmth and zip. Though Dellapolla, an actress, has a rich resumé in directing elsewhere, she is new to taking the reins at SCC. Here we remember her as the unforgettable, scene-stealing Mrs. Potts last year in Disney’s “Beauty and the Beast.”

Hannah Faye-Huizing as Ariel brings her A-game to this role with her clear soprano voice and professional training, paired with Michael Drozd as Prince Eric.

But the real scene-stealer here — actually there are two — is Adam Fronc as the master-minding friend of Ariel and master-of-ceremonies throughout, Horatio Thelonius Ignatius Crustaceous Sebastian. Surely he is an Alaskan King Crab, in a fire-engine red outfit from top hat to patent-leather shoes. Fronc plays the role with all the ham (or shall I say chowder?) and energy of any wily-but-winsome crab. He is outrageously wonderful and his voice has never been better. Fronc has been in numerous Center Stage plays at SCC and other nearby theaters, but this is his outstanding role.

The other not-to-miss performance is that of Kimet Speed, who dives into the role of the wicked sister of Triton, Ursula the Octopus. She’s brilliant as the villain in this story, showing off both her strong mezzo soprano vocal talents and considerable acting chops.

Poor Ursula had been tossed aside as potentate of the briny deep because she was female, wouldn’t you know? And so her younger brother Triton — why he was only a tot at the time! —unfairly inherited the role. Yet Ursula retains witchery powers and can grant “poor unfortunate souls” like Ariel a few days on land, with legs too boot! Of course there is a price to pay — her voice. She’ll get it back however, if when voiceless she can persuade her love to kiss her in three days. What’s the problem? Ursula tells her “on land it’s much preferred for ladies not to say a word …”

Other notables in the cast are Michaal Lynn Schepps, delightful and funny as Chef Louis as she prepares a feast of all matter of sea creatures; 12-year-old Alexandra Behmoiram as Jetsam, one of the electric eels that swarm around Ursula; Jonathan Fogarty as the irrepressible Scuttle the Seagull, and Zoey Engeldrum as Flounder, Ariel’s friend, who is tossed aside like last week’s sashimi once Prince Eric comes on the scene.

If I’m being overly aquatic with the vocabulary, blame the show! Howard Ashman and Glenn Slater’s infectious lyrics are hilarious throughout to Oscar-winner Alan Menken’s music. Squid pro quo, anyone?

While some of the solo voices might be a tag ragged, together as a chorus they are in sync and belt out memorable numbers such as “Kiss the Girl” and “Under the Sea” where “the seaweed is always greener in somebody else’s lake” with gusto.

Though the troupe always works with a limited budget, the staging here is effective, with rich blue-green swaths of fabric as a backdrop, and the costumes (Katrina Lovett) are plenty sea worthy. Okay, the show’s got a few rough edges, but some outstanding numbers make up for that.

Threaded throughout the story is a message of accepting people outside your normal frame of reference, making “The Little Mermaid” a tale for today’s times. Take the kids — who will love it — and sit back and enjoy!

Center Stage presents “The Little Mermaid” through October 27. Tickets are $30 ($15 for students). Performances are Thursdays, through Saturdays at 7 p.m., and Sundays at 2 p.m. The Southampton Cultural Center is at 25 Pond Lane, Southampton. Dinner theater packages are available at Plaza Café and Le Chef. Brunch theater packages are available at Edgewater and Fellingham’s before Sunday matinees. To purchase tickets visit scc-arts.org or call 631-287-4377.