Rice, Beans And Toilet Paper: Nathan Slate Joseph's Art Is All About The Essentials - 27 East

Rice, Beans And Toilet Paper: Nathan Slate Joseph’s Art Is All About The Essentials 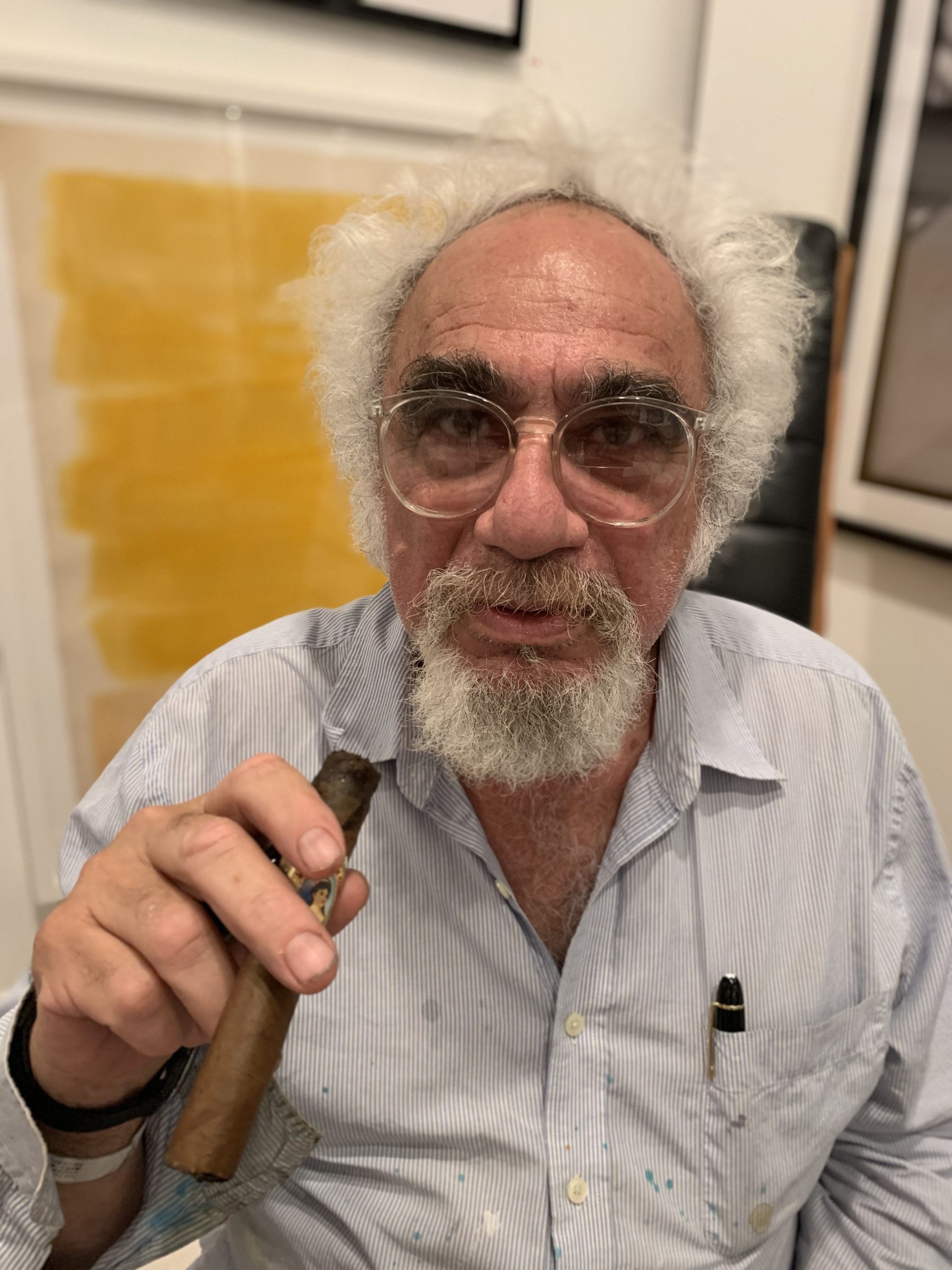 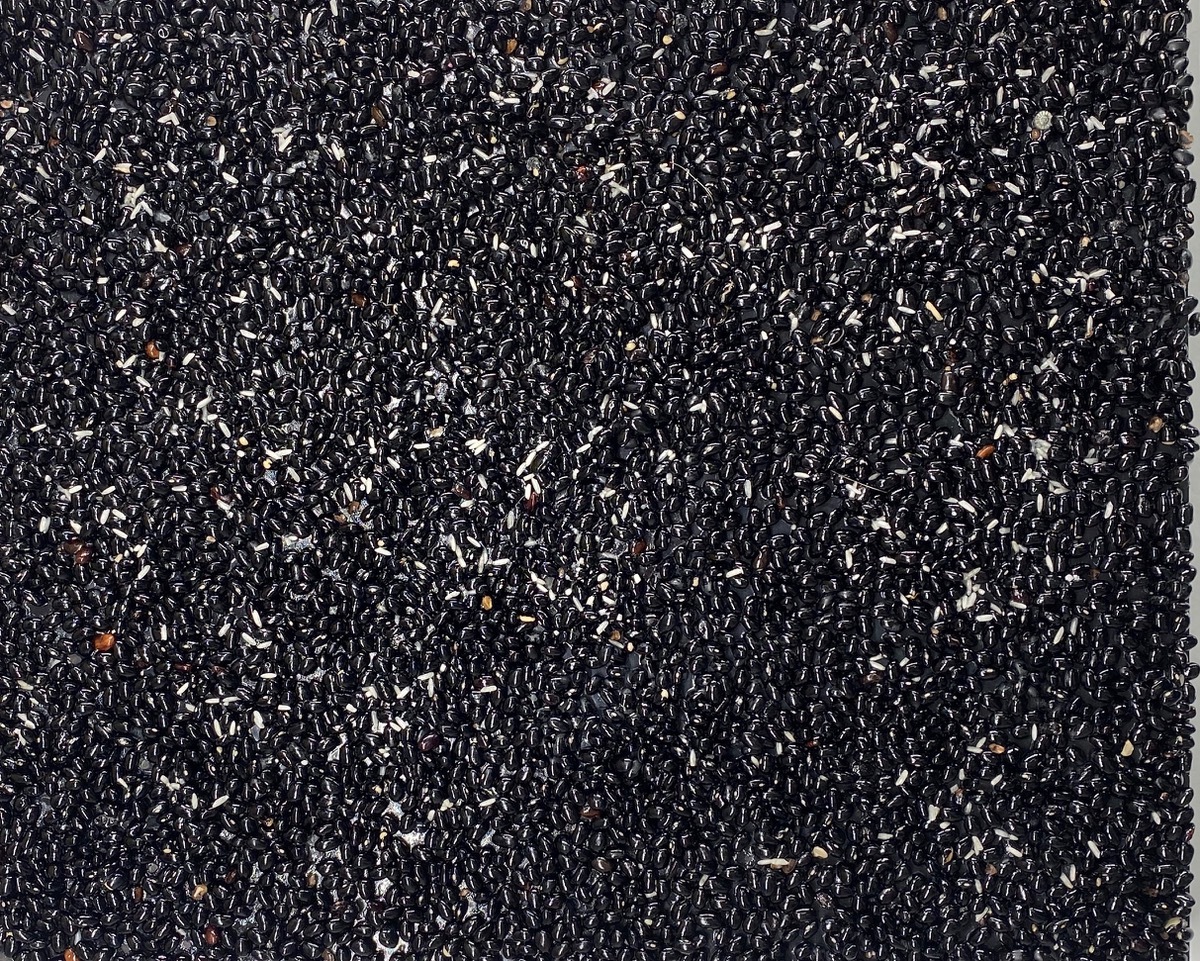 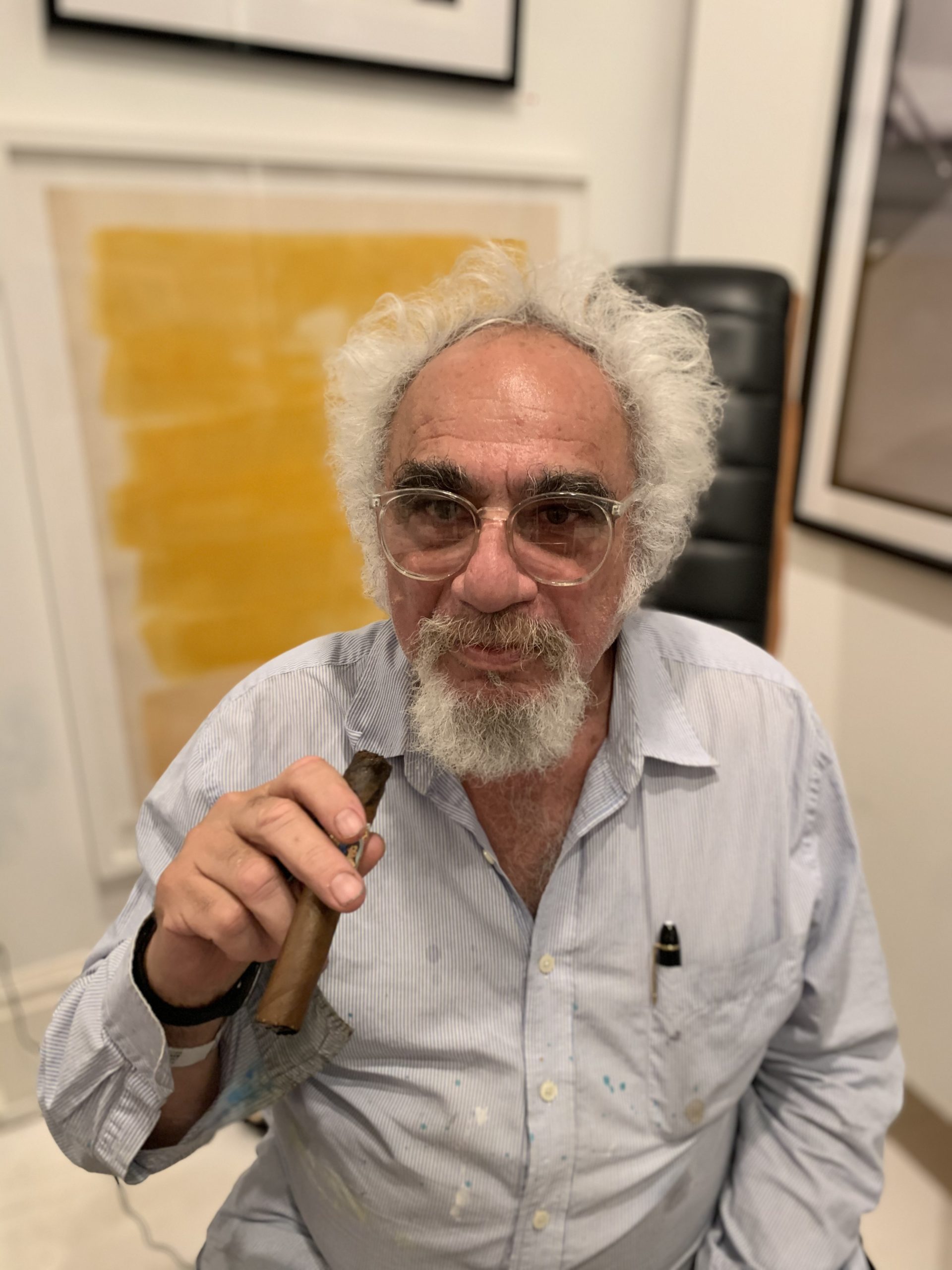 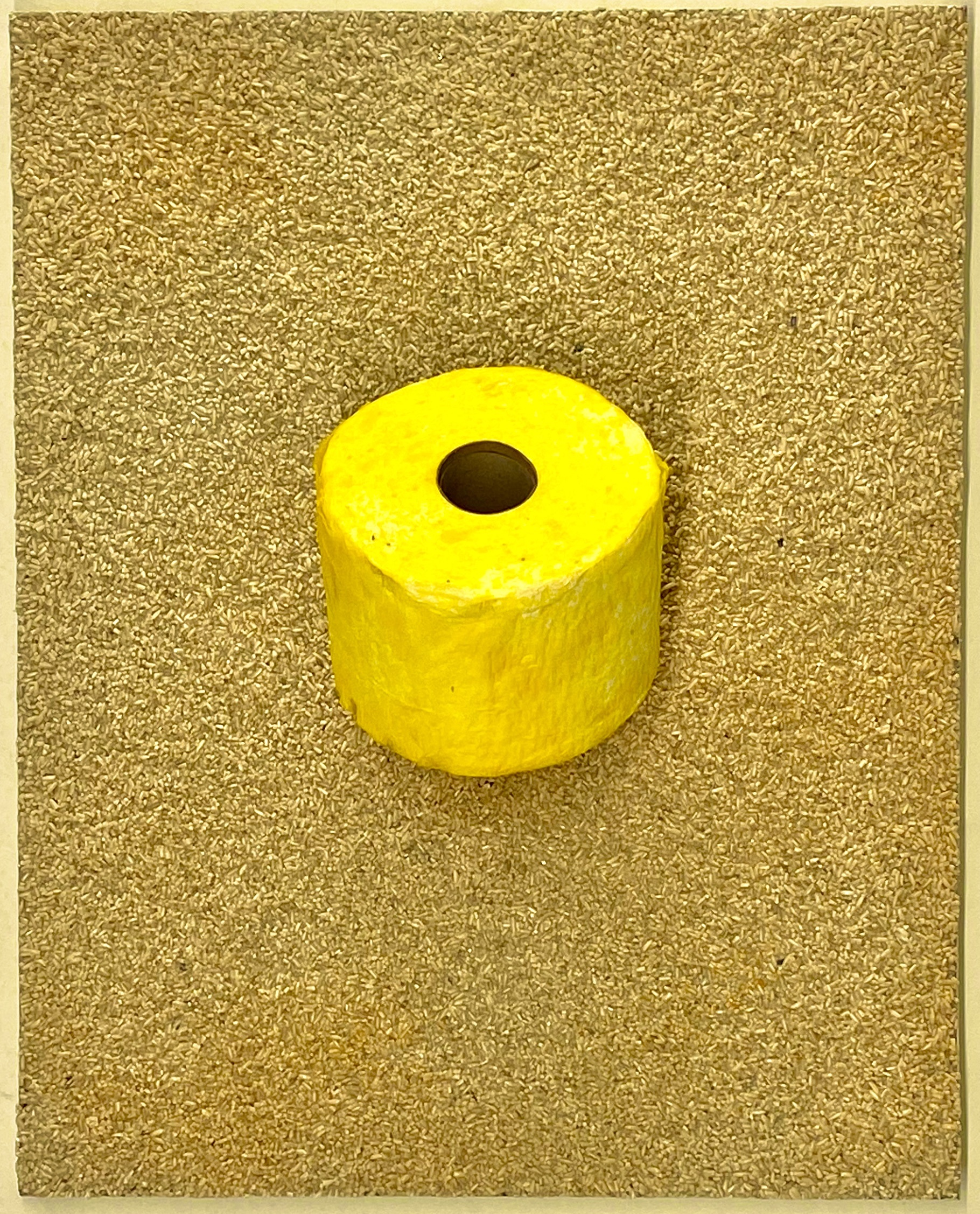 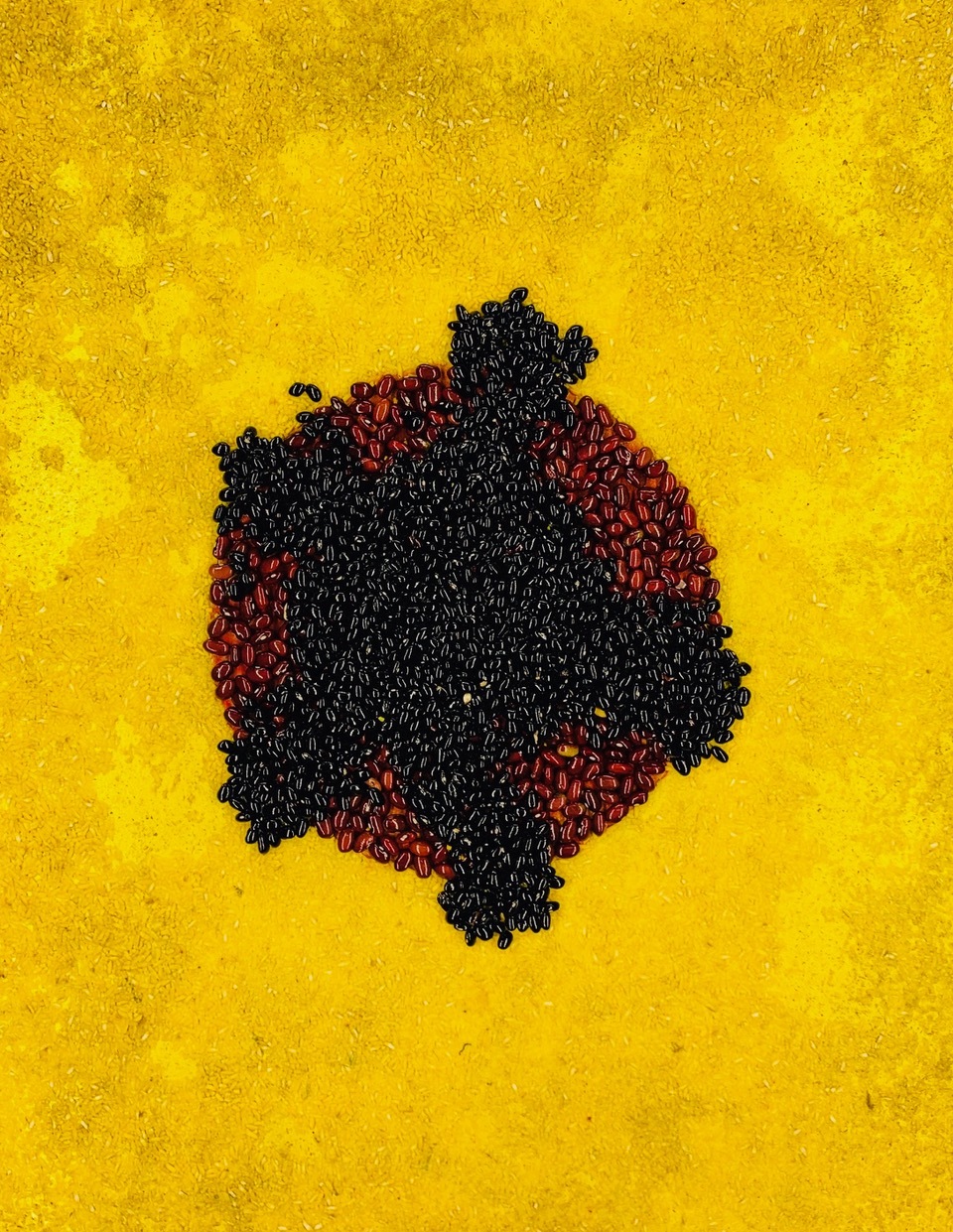 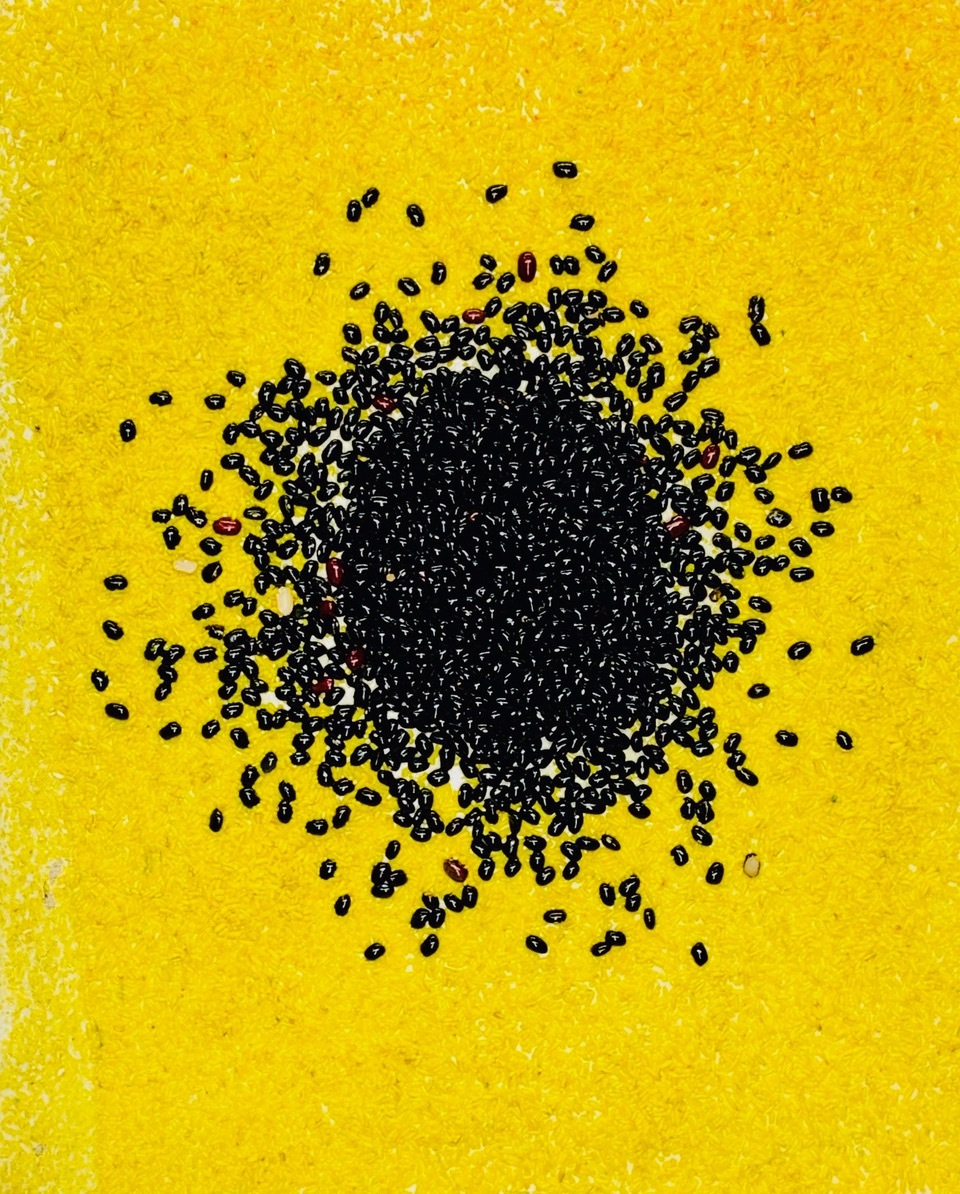 Rice and beans … they’re as essential as toilet paper in this era of pandemic.

That’s why Sag Harbor sculptor and artist Nathan Slate Joseph decided to use all three of those items in his latest creative endeavor.

Joseph’s large scale “paintings” are created from dried and dyed beans, rice and toilet paper and are collectively part of an exhibition called “Essentials,” which opens this weekend at Keyes Gallery, adjacent to The American Hotel in Sag Harbor.

“What is the most popular painting in the world?” asked Joseph during a recent late night visit to the gallery. “The Mona Lisa?

“The fact is, it’s a painting you can just imitate.”

With that, he held his hands up to the side of his face (an unlit cigar in one of them) and opened his mouth wide, offering an uncannily accurate reproduction of Edvard Munch’s ‘The Scream.’”

“A painting should have more than one aspect,” he noted. “Where else can you see motion that creates art? I thought of color.”

As an artist, Joseph, who came to New York from his native Israel in the 1960s and was inspired by the colors he encountered on a trip to Mexico in the 1970s, is a big fan of working with available materials, like scrap metal. He’s also keenly in tune with issues of importance in developing countries, among them globalization, immigration and climate change.

“My approach has always been organic in terms of color, material, everything. I use what is available and inexpensive, what’s inclusive, not exclusive, and what marries the outdoor with the indoor,” said Joseph. “I saw something on TV about Africa and then something about rice and beans came on. I realized that’s the essence of people — 90 percent of the world eats rice and beans.

“I looked at flat beans laying on the table and I thought, beans, who doesn’t know about beans and rice? It took me back to ‘Who doesn’t know the Scream?’” he said. “So two years ago, I started to play with it. I thought, ‘Let’s see if I can do something with beans on a canvas of wood.’”

But after making a couple attempts with beans and rice as a medium, he put the project away and moved onto something else. Then the pandemic hit, and Joseph finished the commissions he had underway at the time. When the stop-work order came, he found himself with no projects at all. Then a plumber stopped by his studio to fix some pipes and inspired him in a new direction.

“He was like an angel from overhead,” said Joseph. “He pulled out the rice and beans paintings and they still looked great.”

But this time, there was a new urgency and messaging in the work.

“Obviously, it’s about rice and beans. These are things you can still get in the supermarket — rice and beans,” he said. “If you have enough rice and beans you can live, you can eat. It’s part of a basic need around the world.

“What else became relevant? Toilet paper,” he said. “You never thought twice about it, but you wake up one day and it’s become the most important item in the world and people are fighting and killing each other over it. It went from non-existent in your mind to the most relevant item on a dime.”

As an artistic medium, uncooked rice and beans are rigid and difficult to keep in contact with surfaces like wood. So Joseph developed a process of working in which he first bleached both to remove the food properties and affixed them with a glue-like medium.

“There are red beans, lima beans, black beans. There are 1,000 different kinds of beans. There’s also lots of rice — Carolina rice, basmati rice,” he said. “I use white rice and brown rice too, but I bleach it, so it’s not alive anymore.

“It’s organic and natural. I created 25 works of rice and beans. I gave the rice color. It’s not rice anymore, it’s a surface,” he said. “Since I’m into colors, I have the most brilliant colors I can imagine.”

With this body of work, while his choice of medium may be commonplace, Joseph finds that the times we are living in are anything but. He notes that with COVID-19, this is the first time one disease has affected the whole planet at the same time during our lifetimes.

“With the speed of transit — planes and boats, it can spread quickly,” he said. “You go to sleep one night and it’s spring, and the next day it’s a pandemic and you can’t get toilet paper.”

“I’m making art out of something you can eat,” he added. “These works are about basic needs, and I guess you can say we are all experiencing a shift in consciousness in which those essentials are being redefined and revalued."

“Essentials,” an exhibition of Nathan Slate Joseph’s rice, bean and toilet paper paintings, opens with a reception on Saturday, July 3, from 6 to 9 p.m. at Keyes Gallery, 45 Main Street at The American Hotel in Sag Harbor. For information call 631-808-3588 or visit juliekeyesart.com.