Robert Hughes Says Farewell In 'The Spectacle of Skill' - 27 East

Robert Hughes Says Farewell In ‘The Spectacle of Skill’ 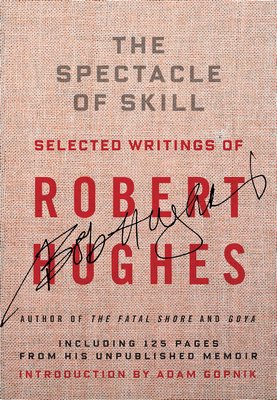 “The Spectacle of Skill” (Knopf, $40, 667 pp) is the last book we will receive, other than work that might be printed posthumously, from the pen of the Australian-born Robert Hughes, who summered for 20 years on Shelter Island.

He was a rambunctious polemicist, a television personality and a historian. But he was, above all, an art critic—arguably the finest of the last half of the 20th century—who wrote for Time magazine for more than 30 years, where he helped raise the level of news magazine criticism to a new high. Through his books and television documentaries, such as “The Shock of the New” and “American Visions,” he helped make contemporary art understandable and exciting to the average educated viewer and reader.

His books “The Fatal Shore,” a history of Australia, and “Barcelona” are classics of their kind. “The Culture of Complaint” uses both rapier and broadsword to skewer and lay waste to both right-thinking liberals and right-wing fanatics. His magisterial study of Goya is one of the very best books about an artist written in the last 50 years. His history of Rome, though scorned by scholars for its inaccuracies, was written with gusto, and is certainly an excellent introduction to the subject.

In 1999, Hughes was driving along an open stretch of road in Australia when he collided with an oncoming car. He had no memory of the accident itself, only of the aftermath, and it became a celebrated court case in Australia.

His description of the terrors he faced while trapped inside his car, and of the trauma to his body, has a Goya-like vividness in his memoir, “Things I Didn’t Know”:

“Under extreme impact, bones may not break neatly. They can explode into fragments, like a cookie hit by a hammer, and that’s what happened to several of mine,” he wrote. “Samuel Johnson once said that the prospect of being hanged concentrates a man’s mind wonderfully. The prospect, extended over hours, of dying in a gasoline fireball does much the same. It dissolves your more commonplace troubles—money, divorce, the difficulty of writing—and shows you what really matters.

“At one point I saw Death. He was sitting at a desk, like a banker. He made no gesture, but he opened his mouth and I looked right down his throat, which distended to become a tunnel: the bocca d’inferno of old Christian art. He expected me to yield, to go in.”

Hughes was in a coma for five weeks after the accident. He underwent multiple surgeries and, after his recovery, walked with a cane, though he was never without pain. He died in 2012.

“The Spectacle of Skill,” with an excellent introduction by Adam Gopnik, is an anthology drawn from several of his books, as well as an unfinished memoir that he was working on before he died. Though the book is something of a doorstop, it moves right along. Hughes was incapable of writing a boring sentence.

He dishes out praise and dispraise with an equal hand. As is often the case, his negative appraisals are the most colorful. Hughes took no prisoners. His particular bêtes noires were Andy Warhol, whom he dismissed as vacuous, and Julian Schnabel, whom he called an “art starlet.”

“Truly bad art is always sincere, and there is a kind of forcible vulgarity, as American as a meatball hero, that takes itself for genius,” he wrote. “‘My peers,’ Schnabel told the New York Times ... ‘are the artists who speak to me: Giotto, Duccio, Van Gogh.’ Doubtless this list will change if he tries a ceiling ... The dull, uninflected megalomania of his kitsch-expressionist imagery (Sex, Death, God and Me) is rant, a bogus ‘appropriation’ of profundity.”

Of Schnabel’s memoirs, Hughes said, “The unexamined life, said Socrates, is not worth living. The memoirs of Julian Schnabel, such as they are, remind one that the converse is also true. The unlived life is not worth examining.”

The book’s title is taken from his first memoir in 1999, around the time the Australian press branded him as a “vile elitist”—to which he answered, “I am completely an elitist, in the cultural but emphatically not the social sense. I prefer the good to the bad, the articulate to the mumbling, the aesthetically developed to the merely primitive, and full to partial consciousness. I love the spectacle of skill, whether it’s an expert gardener at work, or a good carpenter chopping dovetails, or someone tying a Bimini hitch that won’t slip.”

The memoir is somewhat uneven, but it is not the finished product that this meticulous and elegant writer would wish to be judged by. The most moving part of the work is the end, devoted to the life and suicide of his son, Danton, from whom he had been estranged since he divorced his mother.

“The Spectacle of Skill” offers countless pleasures for anyone who has an interest in art and loves an English sentence that is learned, graceful, muscular and allusive. Hughes was sui generis. We will not see his like again.