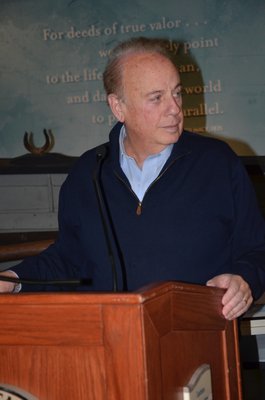 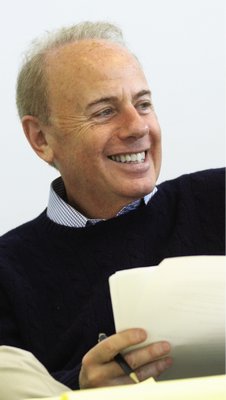 Though his words are read by millions, like most writers, Mr. Rosenblatt is accustomed to primarily doing his work in solitude. But every once in a while, he gets an itch to take it public.

“I’ve done it before,” admitted Mr. Rosenblatt in a recent phone interview. “I had a one-man show in 1991 and ’92 at the American Place Theater in New York.”

Called “Free Speech in America,” the piece was scheduled to run for three weeks. But after receiving rave reviews from the New York Times, it ended up running for seven months.

Now Mr. Rosenblatt is back at it, this time for two nights only (barring another stellar review) at Bay Street Theater in Sag Harbor where he will present “Lives in the Basement, Does Nothing—A Writing Life.” Part monologue, part musical, part conversation, the show stars Mr. Rosenblatt as himself and will be performed at 8 p.m. on Friday and Saturday, April 26 and 27.

When asked what inspired this new theatrical venture, Mr. Rosenblatt confessed that it all began last summer when he wasn’t in the mood to write.

“I thought to keep busy, I’d try one of these,” he said. “Then I thought I’d do a little singing and piano too … then it was time to get the straitjacket.”

That’s because though Mr. Rosenblatt plays jazz piano, he does so only by ear and does not read music. He admits to driving piano teachers to distraction, including Hunky Page, the late legendary ivory-tinkler at The American Hotel.

“He was the nicest guy in the world … he walked out on me,” admitted Mr. Rosenblatt.

While a theatrical piece about the art of writing mixed with a little jazz piano may seem totally incongruous on its surface, there is a logical reason for the link. It all stems from what Mr. Rosenblatt said was the most gratifying review his work has ever received.

It came courtesy of the great newspaper man Pete Hamill who, in writing about his book “The Boy Detective” for The New York Times Book Review, compared Mr. Rosenblatt’s style to that of “a great jazz musician, moving from one emotion to another, playing some with a dose of irony, others with joy, and a few with pain and melancholy (the blues, of course). Alone with the instrument of his art, he seems to be hoping only to surprise himself.”

“That comparison was exactly what I felt,” said Mr. Rosenblatt. “I play jazz piano for my own amusement. I thought I’d give a one man performance on the writing life and build music into it.”

The show will feature Mr. Rosenblatt at the piano discussing the connection between jazz and writing. Incidentally, the text of the show is not written down and like any good storyteller (or musician for that matter), it will flow organically from one topic to another.

The piece begins with Sarah Vaughan’s recording of “Spring Can Really Hang You Up the Most” which Mr. Rosenblatt explained is the way that he begins each writing day.

“I’ll get up and talk about the writing life—the humiliations and all the greatness of it—and indicate how much I love it,” he explained. “Then I go back to the piano to show the importance of basic melody. Bill Evans talked about the importance of returning to the melody no matter how far you riff on that. I believe that’s true in storytelling too.

“I’ll even improvise a song on stage, just to show what I mean,” added Mr. Rosenblatt. “In a way, I’m going on the edge and I could mess it up. But I’m too old to care.”

Fortunately, Mr. Rosenblatt will be among friends at Bay Street, including fellow authors Amy Hempel and Alice McDermott, both of whom he knows through his work as a professor for Stony Brook Southampton’s MFA Program in Creative Writing. In what he calls “almost surprise appearances,” Ms. Hempel will join him on stage Friday to talk about the craft of writing while Ms. McDermott will do the same at Saturday’s performance.

“I’ll have them come up out of the audience for an improv talk, maybe on whatever they feel like talking about,” said Mr. Rosenblatt. “I have no idea what the conversation will be. I want to demonstrate that’s how writing is.”

Though there is no script for this show, per se, there is a production consultant—Bay Street’s artistic director Scott Schwartz who has worked with Mr. Rosenblatt to tweak parts of the piece here and there.

“He gives me little hints of being in one place rather than another, or saying something different than I had,” said Mr. Rosenblatt. “It’s certainly not formal.”

That’s where the improv comes in and ultimately, in this show Mr. Rosenblatt will share with audiences his own wonders in the writing process, as well as the importance of storytelling and the mysteries that even he doesn’t see when he’s deep in the process of it all. Should this two-night foray onto the stage be well received, the question, of course, is, will Mr. Rosenblatt be inclined to extend the run of the show by taking it to the next level, as he did with “Free Speech in America” back in the early 1990s?

“If someone proposes it, I’ll be happy to think about it,” he said. “But I’m a bit old for this as my wife reminds me.

“I might be good for two nights in a row and that’s it.”