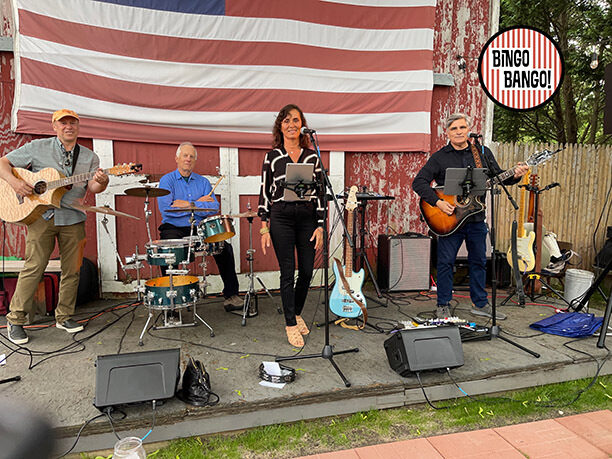 On May 15, Bingo Bango performs at WHBPAC as part of the “Rotary ROCKS!" benefit for the Westhampton Rotary Club. COURTESY THE ARTISTS

Join the Westhampton Rotary Club for “Rotary ROCKS!” — a concert of hit music from the ‘60s through today, performed by East End bands En Fuego and Bingo Bango. The event will be held on Sunday, May 15, at 7 p.m. at the Westhampton Beach Performing Arts Center and includes a cash bar and raffle prizes.

Bingo Bango is a top local cover band known for its mix of lush harmonies and tight arrangements. The band's four players are Robert Florio (guitar and bass), Catherine Caylus (bass and guitar), Steve Skoldberg (keyboard, flute, and guitar), and Howard Mitchell (drums and percussion). Popular groups covered by Bingo Bango include The Beatles, Mamas and Papas, The Byrds, Carl Perkins, Elvis Costello, Blondie, The Monkees, The Doors, The Beach Boys, Ray Charles, and The B52's. Bingo Bango got its start in the Southampton/Sag Harbor area and has performed from Westhampton to Montauk. Florio is a local real estate broker and has a long history working with internet networking and media in the Hamptons. Caylus is an expert creative stained-glass artist. Skoldberg was a long-time music teacher in the Montauk School District and at the Ross School. Mitchell, a percussionist, sailor, and project manager, also has the distinction of actually having attended Woodstock.

En Fuego is Westhampton Beach High School's own homegrown band and winners of the Southampton Town Youth Bureau's 2021 'Battle of the Bands'.

"When you bring together talented musicians playing fun, energetic music in a great venue — all for a good cause — it's guaranteed to be a great time," said Aimee Fitzpatrick Martin, a Westhampton Rotary Club board member and an organizer of the event.