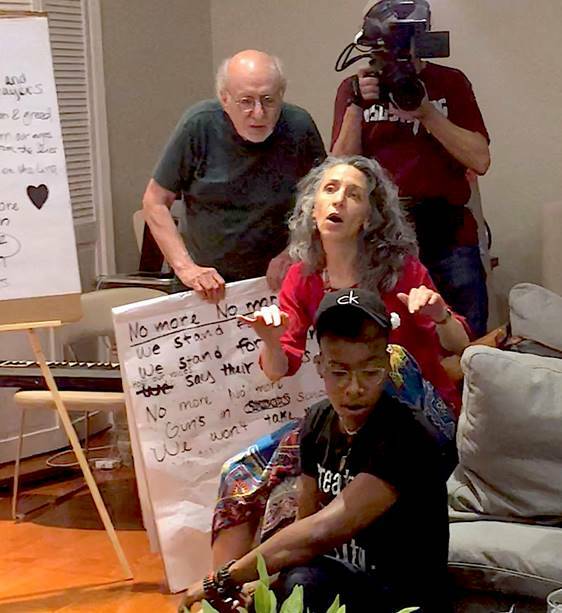 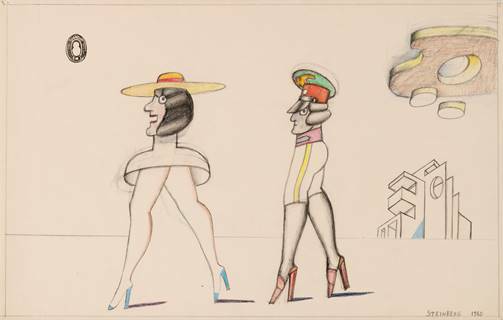 In subject matter and styles, artist Saul Steinberg (1914–1999) made no distinction between fine and commercial art, which he freely conflated in an oeuvre that is stylistically diverse yet consistent in depth and visual imagination. His covers for The New Yorker magazine, including those that represent New Yorkers’ various worldview perspectives, are iconic.

The Parrish Art Museum announced that it has received a major gift from the Saul Steinberg Foundation — specifically, 64 works by the acclaimed artist who lived and worked in Springs for nearly a half century. The acquisition spans 45 years (1945-1990) and features the artist’s signature drawings in watercolor, pen and ink, pencil, crayon, and other media — plus rarely shown work: wooden assemblages, wallpaper, and fabric. Forty-nine works by Steinberg, a Parrish collection artist who lived and worked in Springs for nearly half-century, are featured in the exhibition “Saul Steinberg: Modernist Without Portfolio,” part of the current overarching exhibition “What We See, How We See,” a series of seven special exhibitions currently on view.

The range of objects and styles in the exhibition illuminates Steinberg’s unique perception of the world revealed in quirky abstract portraits, offbeat scenes of quotidian life, animated architectural drawings, and whimsical depictions of birds, cats, and other real and imagined creatures. References to life on the East End of Long Island are clear in landscapes of beaches and farms, and in specific structures like Amagansett Post Office, 1981.

The son of a manufacturer of decorative boxes, Steinberg grew up in Bucharest, Romania. In 1933 he moved to Milan to study architecture and in 1936 began contributing to the Italian humor newspaper Bertoldo. The promulgation of anti-Semitic racial laws in 1938 led him to seek refuge elsewhere, which brought him to the United States in 1942. Through an agent in New York, his drawings had already begun to appear in U.S. periodicals even before his arrival. Steinberg’s first drawing in The New Yorker was published in October 1941.In 1946, Steinberg was included in the critically acclaimed “Fourteen Americans” show at The Museum of Modern Art, exhibiting with Arshile Gorky, Isamu Noguchi, and Robert Motherwell.

In 1959, Steinberg purchased a home in Springs where he began to spend more time after the mid-1960s. He was embraced by the artistic community and the house became a refuge from his busy New York City life.

“We are absolutely thrilled to receive this important and visually magnificent gift of Steinberg’s work and are grateful to our colleague Patterson Sims of the Steinberg Foundation for facilitating this opportunity,” said Terrie Sultan. “Steinberg is a national treasure as well as a pillar of the kind of artistic creativity that makes our community so special. A longtime resident of East Hampton and a citizen of the world, Steinberg has touched the lives of so many. To be able to represent his achievements so substantially at the Parrish Art Museum is an honor.”

The Parrish Art Museum is at 279 Montauk Highway in Water Mill. For more information visit parrishart.org.