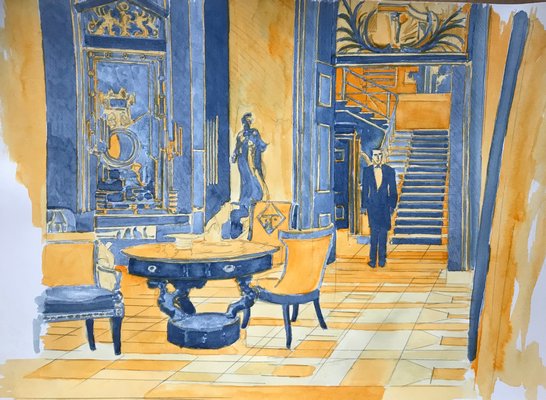 Peter Murray's "Hurd Hatfield in 'The Picture of Dorian Gray,'" watercolor on paper, 2019.

"Angela Lansbury in 'The Picture of Dorian Gray'" watercolor on paper, 2019 by Peter Murray. 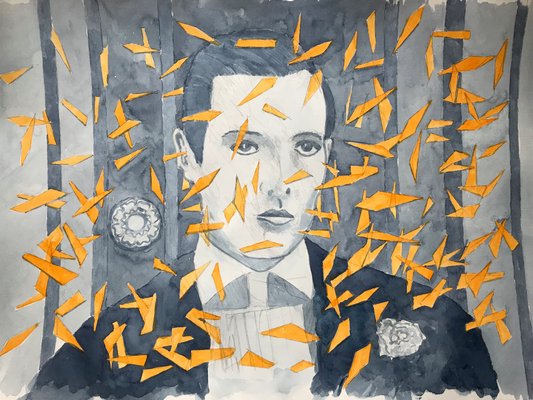 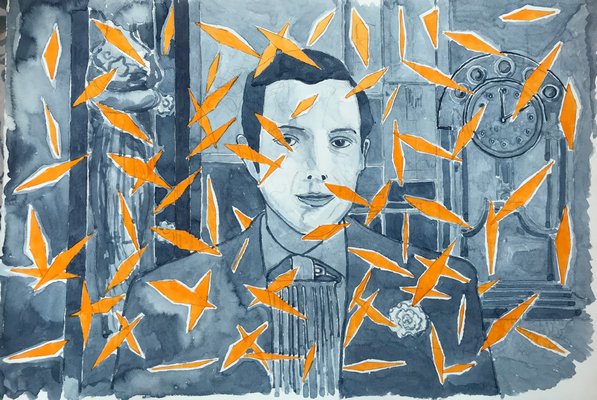 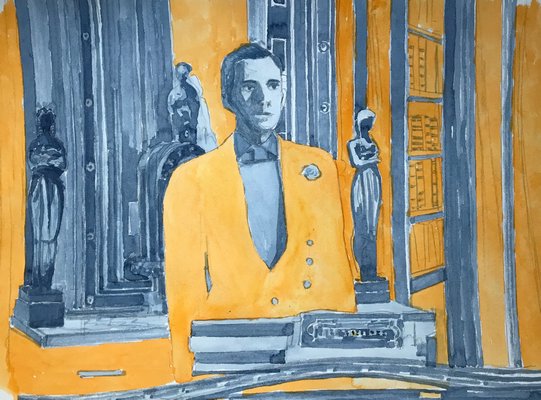 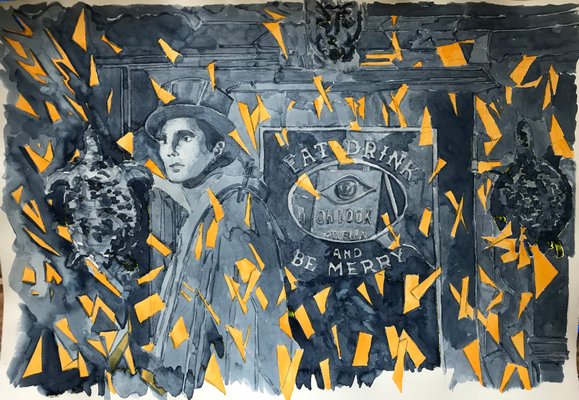 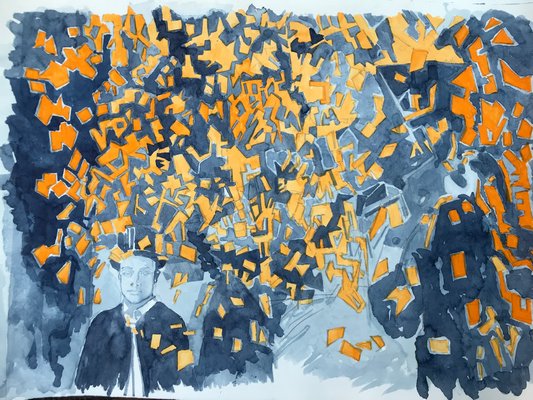 In October 1961, the film “King of Kings” was screened at the Sag Harbor Cinema. The film was a bio-pic about the life and death of Jesus Christ and among its stars was Hurd Hatfield who played Pontius Pilate. After the screening, locals who were there recall that Hatfield, dressed in a red blazer, spoke in person, sharing stories about the filmmaking experience with the audience.

While it may seem odd that a Hollywood star of Hatfield’s caliber would show up at an off-season film screening in tiny Sag Harbor, the fact is, in the early 1960s, Hurd Hatfield wasn’t just any celebrity—he was also a village resident.

As an actor, Hatfield’s most famous film role came in 1945 when he portrayed the title character in “The Picture of Dorian Gray.” Based on the book by Oscar Wilde, the film told the story of a corrupt young man who retains his youthful looks while his hidden portrait grows ever more hideous in a reflection of his soul.

Though the film made him a star, Hatfield frequently lamented that he was forever after typecast as a cold, calculating villain. He was once quoted as saying, “You know, I was never a great beauty in Gray and I never understood why I got the part, and have spent my career regretting it.”

One thing Hatfield didn’t regret was collecting antiques and restoring old houses. During the years he lived in Sag Harbor the actor owned and renovated several historic homes, including the Sleight House on Division Street, another on Garden Street, and a third at the corner of Madison and Sage streets. That last home belonged to the late jazz musician Hal McKusick and was recently purchased by artists April Gornik and Eric Fischl for their new artist-in-residence venture.

By the early 1970s, Hatfield had left Sag Harbor for Cork, Ireland, where he spent the rest of his life restoring historic Ballinterry House (now a luxury guest house), did some acting, and made lots of close friends before he died in 1998 at the age of 81.

One of those friends was curator and artist Peter Murray, and on Saturday, May 4, Hurd Hatfield returns to Sag Harbor as the subject of an art exhibition featuring Mr. Murray’s work. The show will be at the historic Vail House on Madison Street which, coincidentally, is right next door to Hatfield’s former home.

Mr. Murray, the former director of the Crawford Art Gallery in Cork, will display drawings and watercolors that depict Hatfield as he appeared in “The Picture of Dorian Gray,” as well as his co-star in the film, Angela Lansbury. In real life, he notes, Hatfield and Ms. Lansbury were great friends and it was she who introduced him to Cork. In connection with the exhibition, on Sunday, May 5, Mr. Murray will be at the Sag Harbor Whaling Museum to present a lecture on “Hurd Hatfield and ‘The Picture of Dorian Gray.’”

“My watercolors on paper are loosely inspired by ‘The Picture of Dorian Gray,’” explained Mr. Murray in a recent phone interview. “As my starting point, I’m taking parts from the movie and trying to invest qualities of abstraction and expressive content and energy.”

Both the exhibition and the lecture are part of Sag Harbor’s annual Cultural Heritage Weekend. Sponsored by 12 nonprofit village organizations, this year’s theme is “The Stories that Shape Us,” and the story of how Mr. Murray’s work found its way to Hatfield’s former hometown began last August when artist Sabina Streeter, who owns Vail House and frequently portrays historic Sag Harbor figures in her work, visited Mr. Murray in Cork. By chance, Hurd Hatfield’s name came up in conversation and Ms. Streeter learned that not only were he and Mr. Murray close friends, but that Mr. Murray had been working on his paintings of the actor for more than a year.

“Sabina has her own career and her exhibition space is 10 feet away from the house that Hurd Hatfield owned,” said Mr. Murray who will travel to Sag Harbor in late April for the exhibition and talk. “The twists and turns you never fully understand, and I was charmed by this and other connections that existed between Ireland and Sag Harbor.”

When asked to share details about Hatfield’s life in Ireland, Mr. Murray explained that the reason the actor ended up in Cork can be traced to his affection for Ms. Lansbury. Their friendship, he said, began before the filming of “The Picture of Dorian Gray” and can be traced to Ms. Lansbury’s arrival in the U.S. from England with her mother, Moyna, and two brothers. It was 1940 and they were escaping the Blitz. After studying acting in New York for a while, Ms. Lansbury and her mother headed west to Hollywood in hopes that she could find work.

“Moyna couldn’t get working papers, but Angela could and Hurd took them under his wing,” said Mr. Murray. “As immigrants, they were in quite a jam in terms that are familiar today and the world is indebted to the polices of inclusion in the 1940s that allowed her to establish her career.”

While “The Picture of Dorian Gray” did, indeed, launch both their acting careers, only Ms. Lansbury went on to have stellar success.

“Hurd found himself typecast as the villain,” said Mr. Murray, adding that Hatfield’s style of acting began falling out of favor in the 1950s and 1960s. “Having studied with Michael Chekov, he became disillusioned when all the roles he was offered were of those who preyed on the vulnerable, in a Machiavellian dishonest fashion. It was one role after another in that character.

“I think that may have been a factor in his moving to Ireland in the early ’70s,” he said. “He always professed to wanting to be a comic actor but never achieved that.”

Mr. Murray said that though he doesn’t remember Hatfield saying much about his life in Sag Harbor, he often talked about his love for old homes and going to antique auctions in New York.

“There was nothing he liked better on a wet afternoon than to slip into an auction,” said Mr. Murray. “He had a good eye.”

Once he had moved to Ireland, Hatfield didn’t work often, but he did some stage work and the occasional walk-on role in “Murder She Wrote,” the long-running television series starring his old friend, Ms. Lansbury. In later years, he also toured Europe in ‘’The Son of Whistler’s Mother,’’ a one-man show about James McNeill Whistler. Toward the end of his life, the financial tables had turned and it was Hatfield who found himself relying on the kindness of friends.

“He was constantly bemoaning his fate in terms of setbacks, construction or cars breaking down. He didn’t have a lot of money and he worked very hard,” said Mr. Murray. “He was skating on thin ice at many points. He made jokes about going to the old actors’ home, but his friends and talents were good at keeping him going.”

Though he never overcame his reputation as Dorian Gray, Mr. Murray remembers him as a delight and adds that he was nothing like the nefarious characters he often played on screen.

“The Hurd that I knew was extremely friendly, charming, a great host and full of life and laughter,” recalled Mr. Murray. “In person he was witty, funny and getting up to all sorts of scrapes … and Ballinterry always had interesting people staying there.”

The opening reception for Peter Murray’s exhibition is Saturday, May 4, from 6 to 9 p.m. at Sabina Streeter’s Vail House, 25 Madison Street, Sag Harbor. Mr. Murray will present his lecture “Hurd Hatfield and “The Picture of Dorian Gray’” at the Sag Harbor Whaling & Historical Museum, 200 Main Street, Sag Harbor, on Sunday, May 5, at 2 p.m. For more information visit sagharborwhalingmuseum.org.