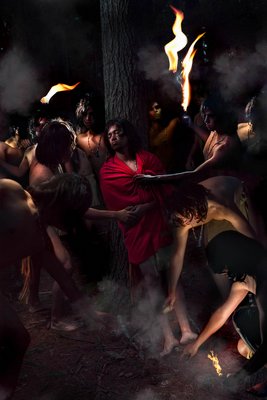 'The Interment of Pogattacut,' 2017, by Jeremy Dennis. 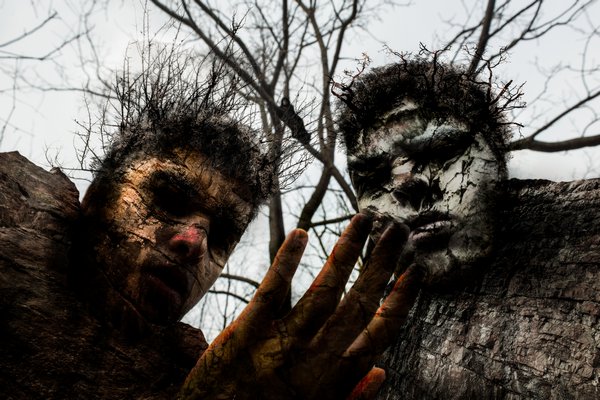 The practice of storytelling runs deep in Native American culture. Before the advent of written language, it was through oral traditions that myths, legends and cautionary tales were passed from one generation to the next in indigenous societies.

Jeremy Dennis, a member of the Shinnecock Nation, is inspired by family tradition and the history of the Shinnecock people. As an artist, Mr. Dennis, digitally alters photographs to create fantastical art pieces that provide accompanying imagery for stories that have historically been told only through word of mouth. Last summer his work was featured in a Parrish Road Show exhibition at Duck Creek Farm in Springs, and two images from his series “Stories—Indigenous Oral Stories, Dreams and Myths” are currently on view at the Parrish Art Museum as part of “Fresh Look 2019-2020: Every Picture Tells a Story.”

Throughout December and early January, Mr. Dennis served as an artist-in-residence at the Parrish where he shared Native American legends and myths from around the country with South Fork students in grades four through 12. He then led workshops in which the students created their own artwork based on the stories he told. That artwork will be on view in the upcoming 2019 Student Exhibition, which opens at the museum on February 9.

On a recent Wednesday morning, a small group of 9- and 10-year-olds from the Hayground School met Mr. Dennis and listened intently as he talked about his artwork and explained the meaning of the tales behind it.

“I went to school for visual arts and photography at Stony Brook University. After years of schooling, I was able to accomplish the work we’ll be looking at,” he told the children. “The work is based on growing up on the Shinnecock Indian Reservation. … It’s history and stories told by parents and passed down from generations through family members.”

Mr. Dennis stopped in the museum’s spine gallery in front of “The Interment of Pogattacut,” his photographic retelling of a famous East End legend in which a group of Manhansett Indians carried the body of their dead leader, Pogattacut, from Shelter Island to Montauk for burial in 1651. The story goes that near present-day Route 114 and Whooping Hollow Road in East Hampton, the group stopped to rest. The spot where the chief was placed on the ground became sacred to Native Americans.

Today, a historical marker on Route 114 is all that remains of the story, he explained, but in his photograph, the tale comes alive with a depiction of the dead chief surrounded by the men who are transporting him. Mr. Dennis told the students that he used his own face as that of the dead leader as well as each of the men carrying the body, something he was able to accomplish through the use of digital technology.

Stories of transformation are a common theme in Native oral tradition and Mr. Dennis explained that the second work on view, “The Stone Coats,” was inspired by the Iroquois legend of mythological rock giants that once roamed North America and were said to compete with humans for game.

“A lot of these stories come from dreams and visions, which we pay attention to. The giants are part human and part stone,” said Mr. Dennis, pointing to the image of the two figures which, again, both have the face of the artist himself. “Look, there are trees growing out of their heads.”

Back in the art room of the Parrish, it is this idea of human transformation that Mr. Dennis enforced as the students settled in around a table and prepared to make their own pieces.

“We’ll be using our own image and place it in a story about the moment of transformation,” explained Mr. Dennis, who shared the tale of the Snake Brothers, a Native American legend from the southwestern United States.

The story goes that while hunting a buffalo, four brothers hear a voice telling them not to harm it. One brother listens to the voice, but the other three ignore it and soon find themselves transformed into rattlesnakes. Later, when the human brother sets out for battle, he visits his three snake brothers to ask for their blessing of protection and, ultimately, survives the battle unharmed.

“From that point on, he realized that snakes were protectors of humans,” Mr. Dennis explained. “We often think of snakes as dangerous, but the moral of the story is to respect snakes.”

The students were then given a photo of their own faces and instructed to incorporate it into an artwork depicting their own transformations into snakes. Using crayons, markers and various types of paper to collage elements onto their sheets, each student told his or her version of the tale of the snake brothers. Also included in each work of art was a strip of paper with the quote “I transformed into a snake to protect my community.”

As the students worked, Mr. Dennis explained that he casts a wide net in coming up with these transformation stories that he shares with the various classes and adds that no two are the same. From whales off Martha’s Vineyard to buffalo on the high plains or even inanimate objects such as bowls and vegetables, anything’s possible with a little imagination, and come February 9, all of it will be on view.

“I’m learning too. I’m researching and gathering these stories rather than just telling ones that I grew up with,” Mr. Dennis said. “The Parrish is so supportive. I’ve spent 28 years on the reservation. This is an opportunity to share some of my background and storytelling is a way to share that knowledge.”

Another exhibition on view now at the Parrish focusing on local indigenous culture is “William Merritt Chase: The Shinnecock Years,” an exhibition that explores the relationship between Chase’s 19th century summer art academy and his neighbors from the Shinnecock Reservation who played an integral part in the life of the art school as well as the nearby Shinnecock Hills Golf Club. The exhibition features works by Chase and his students, augmented by archival photographs from 1890 to 1910 from the book “Time and History” by Shinnecock historian David Bunn Martine.

The 2019 Student Exhibition at the Parrish will run February 9 to March 10. In addition to 350 student works by the participants in Jeremy Dennis’s workshops, the show will feature art by more than 1,000 young artists from schools all across the East End. The Parrish Art Museum is at 279 Montauk Highway, Water Mill. For more information, call 631-283-2118 or visit parrishart.org.