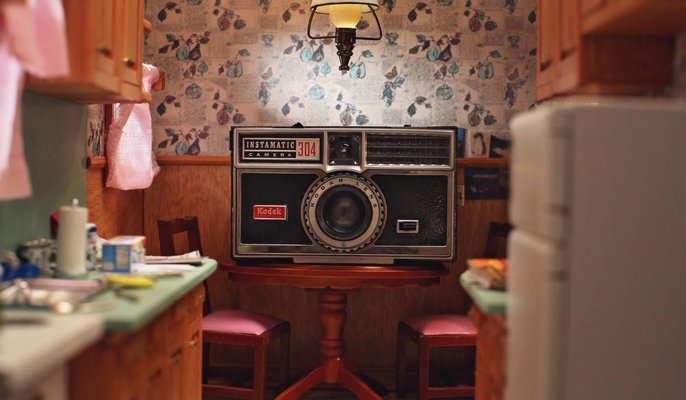 "Kitchen Instamatic" is one of the works on view in "The Hidden World of Ojbects," an exhibit curated by Kelcey Edwards for "Spring/Break Art Show" in New York City. BY ELAN AND JONATHAN BOGARIN

The show is a curator-driven art fair with the theme “Fact & Fiction” and Ms. Edwards is presenting an exhibition titled “The Hidden World of Objects” featuring new work by painter Richard Pasquarelli and sister and brother filmmakers Elan and Jonathan Bogarín whose documentary “306 Hollywood” premiered at Sundance Film Festival last year.

“The artists featured in ‘The Hidden World of Objects’ are conducting an investigation into the power of objects to connect us to our most deep-seated sense of personhood,” explained Ms. Edwards in a statement. “In keeping with the Spring Break 2019 theme, the works investigate this paradoxical power of objects to toggle between the symbolic and literal, the real and ideal by exploring the psychological, and thus unreliable and imperfect nature of memory and association.”

Though this is Ms. Edwards’ first collaboration with the Bogaríns, she worked with Richard Pasquarelli in November on a group exhibition in Southampton titled “Love Is Not All.” The pop-up exhibition in a home on Bishops Lane featured the work of five artists, including East End-based artist Jeff Muhs.

In February 2018, Ms. Edwards launched Iron Gate East, an exhibition series and pop-up gallery that curates year-round exhibitions and events throughout the East End and New York City. She lives in Quogue with her husband and three children.

For tickets and information on the exhibition, visit springbreakartshow.com.