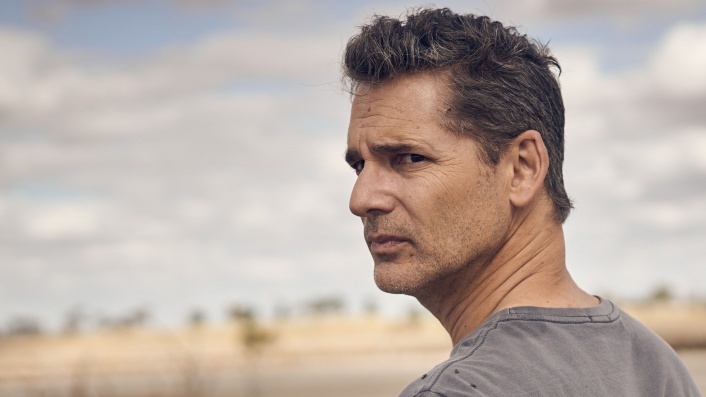 “The Dry,” an Australian mystery based on the book by Jane Harper.

This weekend, the Westhampton Beach Performing Arts Center kicks off its series of spring films with screenings of Oscar Nominated Live Shorts. The program features live action nominees “Feeling Through,” “The Letter Room,” “The Present,” “Two Distant Strangers” and “White Eye.” All five shorts will be screened Friday, April 23, to Sunday, April 25.

“This is only the beginning of our cinema reopening plans,” said Allison Frost, curator of the Finest in World Cinema program at WHBPAC. “Just as art can change the world, so too can the events of the world change art. Film, as a medium, is electric with the possibilities, and WHBPAC is thrilled to still be positioned to present what visions may come.”

WHBPAC will follow up the Oscar shorts with the highly anticipated British horror film “In The Earth.” This post-pandemic produced film will be screened Friday, May 7, through Sunday, May 9. As the world searches for a cure to a devastating virus, a scientist and a park scout venture deep into the woods. As night falls, their journey becomes a terrifying voyage through the heart of darkness as the forest comes to life around them.

On the weekend of May 14 to 16, WHBPAC will screen “About Endlessness,” by Swedish auteur Roy Andersson. A kaleidoscope of the human condition, the film includes scenes of a couple floating over war-torn Germany, a father and his daughter in the pouring rain, a teenager dancing outside a cafe, and a defeated army marching to a prisoner-of-war camp.

From May 21 to 23, WHBPAC will present “The Dry,” an Australian mystery that immerses moviegoers in the landscape of the Land Down Under. Based on the book by Jane Harper, the film follows Aaron Falk (Eric Bana) as he goes back to his drought-stricken hometown to attend a tragic funeral. However, his return reopens the door to the unsolved death of a teenage girl.

All spring screenings at WHBPAC run Fridays at 7:30 p.m., Saturdays at 4 p.m. and 7:30 p.m., and Sundays at 4 p.m. Tickets are reserved and the theater adheres to New York State’s capacity limits. Prices are $15 ($9 for seniors) and can be purchased online at whbpac.org or through the box office at 631-288-1500. The Westhampton Beach Performing Arts Center is at 76 Main Street, Westhampton Beach. The box office will be open one hour before each screening for sales and customer assistance.