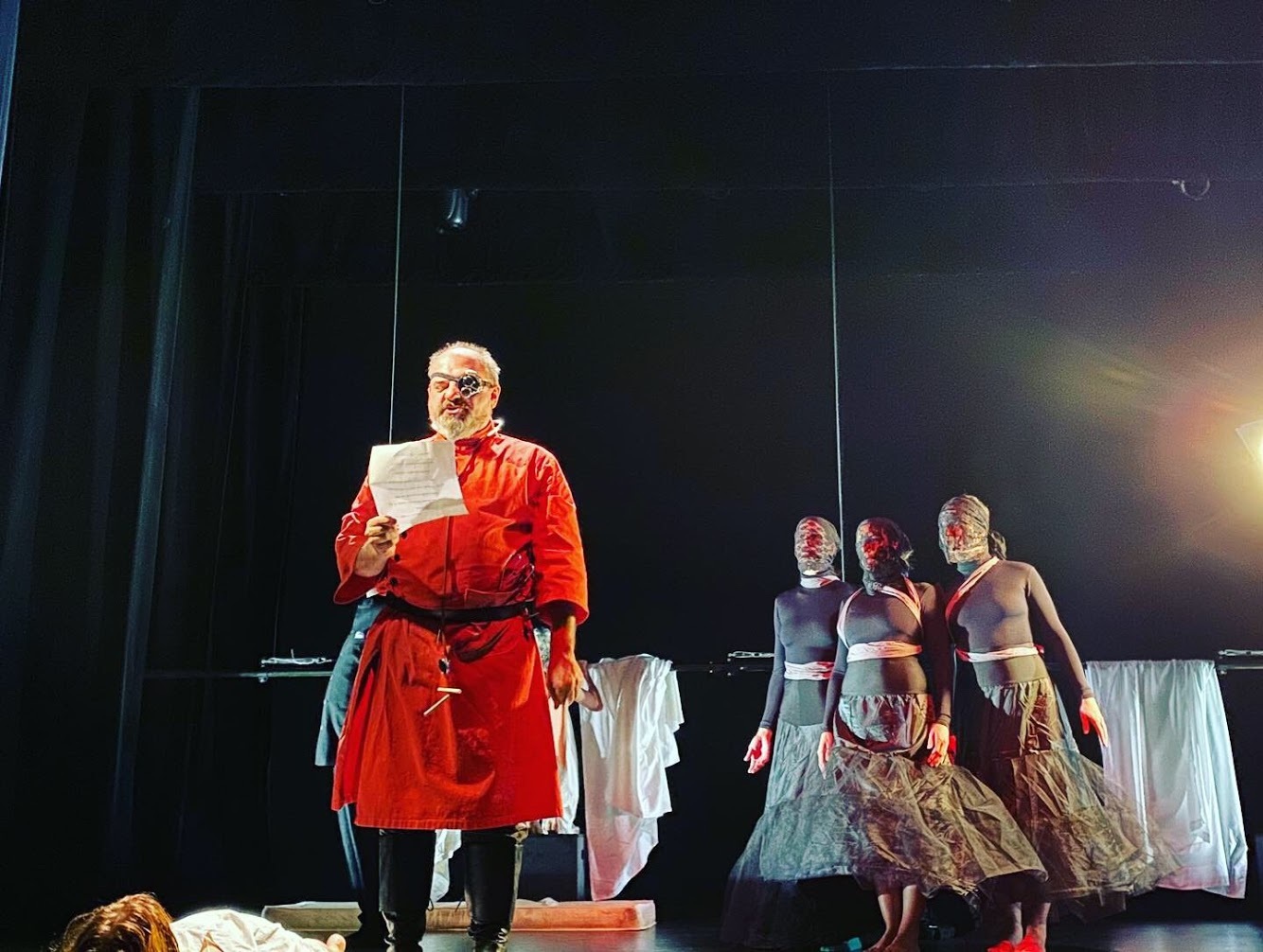 Josh Gladstone in a previous Halloween-themed performance at Guild Hall. 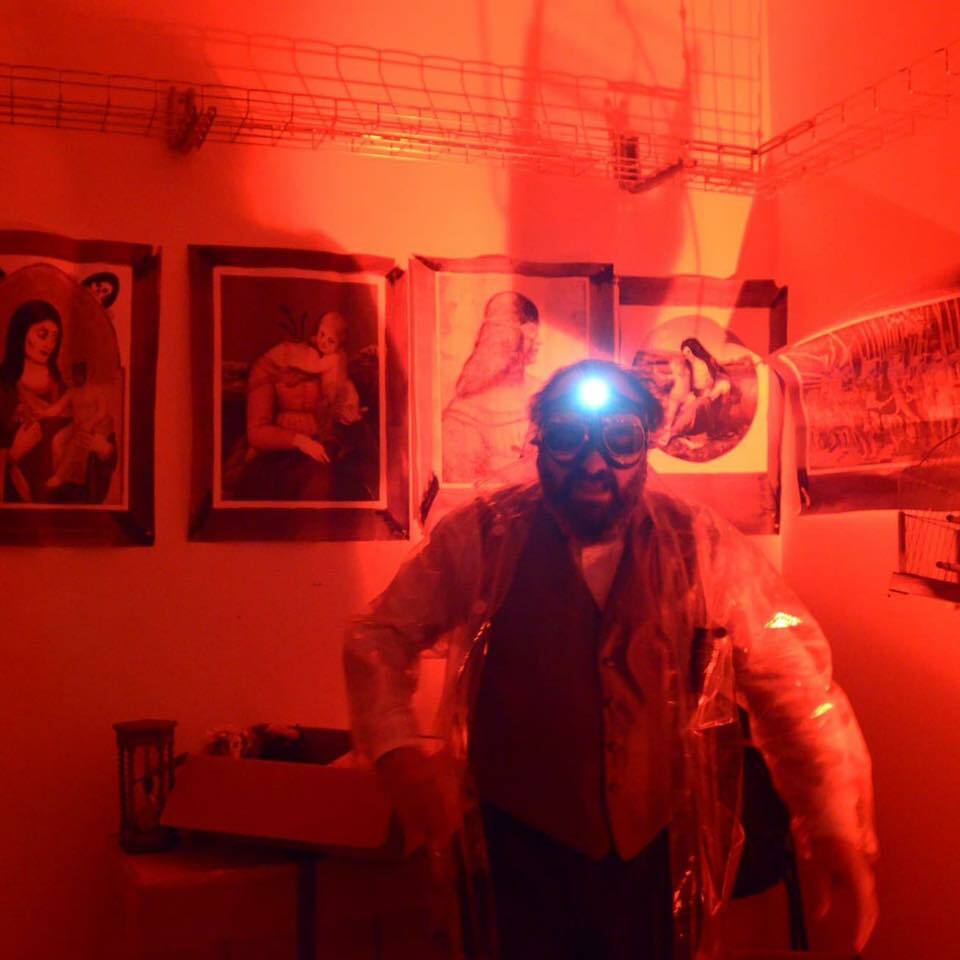 All Hallows’ Eve will soon be upon us. While celebrating the season with a few well-placed frights is a time-honored tradition, since the start of 2020, there has perhaps been nothing scarier than this entire year itself, given the pandemic and the inability of those intrepid souls we typically rely on for entertainment to offer theatrical relief.

Fortunately, Guild Hall has figured an ingenious work-around in these days of social distancing. Welcome to the John Drew Backyard Theater, an intimate little performance space tucked away in a garden just outside the now darkened theater. This weekend, the space will be transformed into a place of terror when Guild Hall presents “Stage Fright,” four spine-chilling tales of the macabre woven in the moonlight by a small retinue of costumed actors under the direction of the John Drew’s Artistic Director Josh Gladstone and Assistant Director Tristan Griffin.

Gladstone will also be one of the performers, along with his wife, Kate Mueth, and actors Vanessa Walters and Trevor Vaughn.

“We have the Hunter’s Moon coming up this weekend — there is a full moon at the beginning and end of October this year,” Gladstone said. “The lighting is delicious and strange and mysterious. You’re going to be in an ambiance of billowing fabric, haunting imagery and ghosts appearing in surprising places.

“Our campfire will be video and LED projections,” he added.

Gladstone is an old hand at scaring people and some may recall that he was the mad genius behind Guild Hall’s popular “Ghouled Hall” haunted house offered a number of years ago. In addition, he and Mueth also co-produced “The Haunt at Mulford Farm,” which ran next door to Guild Hall for several consecutive Halloweens.

With COVID-19, this year is unlike any other in living memory, and Gladstone explains that in recent months, having a venue has become key for performers. Which is why the John Drew Backyard Theater at Guild Hall is something of a silver lining in an otherwise dour year, though this week, it will take on a decidedly more sinister tone.

“Builders built a 16-by-16 platform stage near the rear entrance to the theater,” explained Gladstone. “Miraculously, we did 20 shows in August — a whole mix of concerts, play readings, all beautifully lit. We also put some audio out there.

“It’s a great space for 40 people to watch a show. It’s not going to keep Guild Hall in business, but we have a couple of sponsors,” he added.

For “Stage Fright,” a team of designers and artists — including Sebastian Paczynski, Christine Sciulli, Joe Brondo, Patrick Dawson, David M. Brandenburg and Rafael Alvarez — are lending their talents to create eerie soundscapes, mood lighting and frightening projections, plus what is billed as “some truly terrifying surprises.” Even Sag Harbor puppet master Liz Joyce is contributing to the haunting efforts — and earlier in the day on Halloween, she will also offer a much less-scary puppet show for the little ones.

“It’s four short stories told outdoors and complimented with video projection design, choreography, theatrical make up and surprises,” explained Gladstone of “Stage Fright.” “It’s Halloween fun, but it’s not a little kid thing. The performance Liz is doing in the morning is great for 4-year-olds. While our performance has no foul language, it is mature material.”

In addition to a story by Neil Gaiman (who is the author of “Coraline,” which was made into a truly creepy animated film by Tim Burton in 2009), featured will be dramatic presentations of three lesser-known writings from the pulp era by B.C. Bridges, Richard Matheson and Septimus Dale.

“Each one is horror-themed and each is darker than the next, with some really awful twists and bloody surprises,” Gladstone said. “They read well.”

The writers come with some serious cred. For example, Matheson, who died in 2013 at the age of 87, wrote 16 episodes of “The Twilight Zone,” including the famously creepy “Nightmare at 20,000 Feet,” about a man on a commercial flight who is the only passenger able to see a creature hanging out on the wing of the aircraft. In addition, his 1971 horror short story “Duel” was the source material for Steven Spielberg’s directorial debut when it was made into a TV film.

‘The Little Girl Eater’ [by Septimus Dale] is our longest at 20 minutes and four actors are reading it together in round robin choral way,” Gladstone explained. “The others are about eight minutes long. The unifying theme is one of bloody surprises and despair.

“They’re timeless and spooky and dark,” he added. “It’s one of these rare moments where you can do live theater now.”

“Halloween is inherently theatrical. It’s the celebration between the spiritual world and our material plane. In that moment, the spirits come through,” said Gladstone. “The harvest, the seasons, and ancient traditions in our roots are primeval.

“It’s our favorite holiday in terms of playfulness and creativity and how everyone gets involved,” he added. “We would love people to come in costume if they like. This is a nice compliment to that.

“Be sure to bring a blankie and a beach chair.”

“Stage Fright” is suitable for adults and children over 11 years of age. Tickets are $45 per lawn circle, which seats one or two members of a quarantine pod. Guild Hall is at 158 Main Street, East Hampton. Visit guildhall.org to reserve.

For the little ones ages 3 to 7, Liz Joyce & A Couple of Puppets presents “Minkie’s Halloween Adventure” in the John Drew Backyard Theater on Saturday, October 31, at 11 a.m. and 1 p.m. Audience members will receive a take-home puppet-making kit, including a pre-recorded lesson with Liz Joyce, and a special Halloween treat from Citarella. Costumes are encouraged. A $30 ticket covers one full lawn circle, which can seat two people.