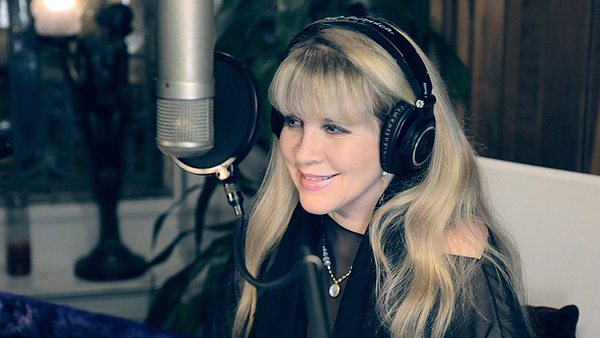 Sitting on her bed, in a cottage on a beach somewhere in Florida, Stevie Nicks counts her blessings.

“We just finished our last big concert and I’m surrounded by people I love—my two back-up singers Sharon Celani and Lori Nicks, she’s my sister-in-law, and my assistant, Karen—and my little doggie Sulamith Wülfing,” she said. “She’s in the movie too,” Ms. Nicks said of her 14-year-old Chinese Crested Yorkie.

The movie is the documentary “In Your Dreams,” which was co-directed by Ms. Nicks and Dave Stewart of the Eurythmics and focuses on the making of the album of the same name. The 14-track album was released in May 2011. The 101-minute documentary feature will make its world premiere at the 20th annual Hamptons International Film Festival on Sunday, October 7, at 3 p.m. at the Sag Harbor Cinema.

According to Ms. Nicks, she and Mr. Stewart, with whom she collaborated for the album as well (“Dave and I wrote songs together. I’d never written songs with anyone in my life, not even Lindsey,” she said, referring to former lover and bandmate Lindsey Buckingham), will both be at a talk preceding the screening, to be held at noon on Sunday at Bay Street Theatre in Sag Harbor.

“We barely finished the film 10 days ago,” the former Fleetwood Mac member and singer of such hits as “Landslide,” “Gold Dust Woman,” “Edge of Seventeen,” and “Leather and Lace,” said on Friday afternoon. “I’ve never made a movie. When you put something out there this personal, you get a little scared. You want people to love it. I’m not spoiled so I don’t expect everyone will love everything that I do but I hope everyone likes it.”

Filming, which took place in 2010 at her home in the Pacific Palisades in Los Angeles, was a “super-magical time,” Ms. Nicks said. It was the happiest year of her life, she added.

“It was from the very, very beginning of the album, to the very end. We followed each song through the journey,” she said. “We were all running around with Flip cameras, recording each other, even when we were shooting our videos in my backyard. When it was finished, I sat on the stairs and thought ‘this will never happen again.’”

Ms. Nicks said that working with Mr. Stewart was the experience of a lifetime, and one that she hopes to soon repeat.

“He makes you feel like Alice in Wonderland and he’s the Mad Hatter,” she said. “And that’s a wonderful way to feel.”

“Every day Dave arrived at 2 o’clock with his posse, and then I have my entourage, and we’d work and film until around 7:30 or 8 and have dinner for 12. It reminded me of the stories of the artists in Paris in the ’20s,” she recalled. “Then we’d go back to work for another two and a half hours. That’s what we did every night. And every holiday, from Easter to Halloween, we’d dress up and film that too,” she continued. “Dave Stewart created this amazing magical sandbox for me, for my friends, for his friends.”

A big motivation for making the film came from watching the documentary “The True History of the Traveling Wilburys,” which filmed George Harrison, Jeff Lynne, Roy Orbison, Tom Petty, Bob Dylan and Jim Keltner during a week at Mr. Stewart’s home, Ms. Nicks said. The film shows the band members writing and recording a song a day to produce an album.

“I loved it so much that they filmed that part, it’s a legacy that they left behind. That was my epiphany,” she said. “I told Dave, I want to do that. I want to do what Tom did for the little music men and women. I want to give them that help ... To show them, this is why you want to be a rock star.”

The World Cinema documentary “In Your Dreams,” starring Stevie Nicks, Dave Stewart, Glen Ballard, Waddy Wachtel, Sharon Celani and Lori Nicks will screen at the Sag Harbor Cinema on Sunday, October 7, at 3 p.m. Preceding the film, Ms. Nicks will give a talk at Bay Street Theatre in Sag Harbor that day at noon. For more information, visit hamptonsfilmfest.org.