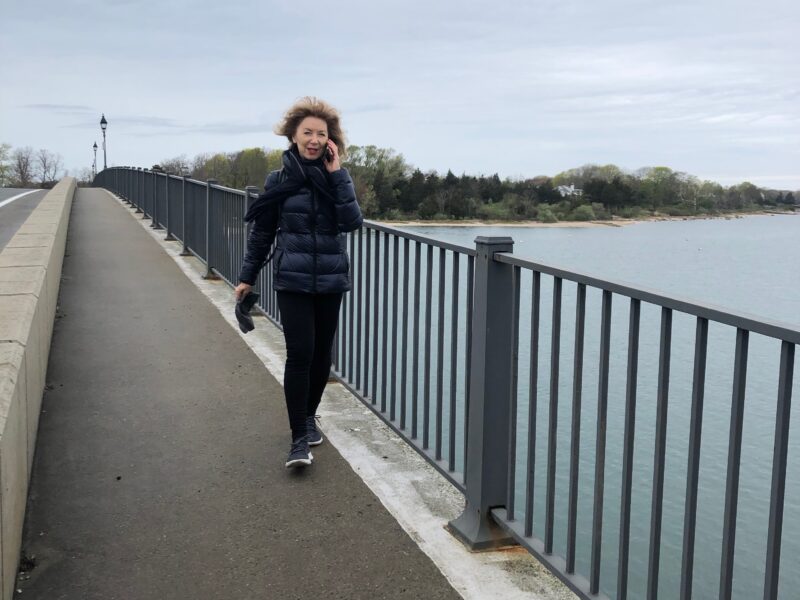 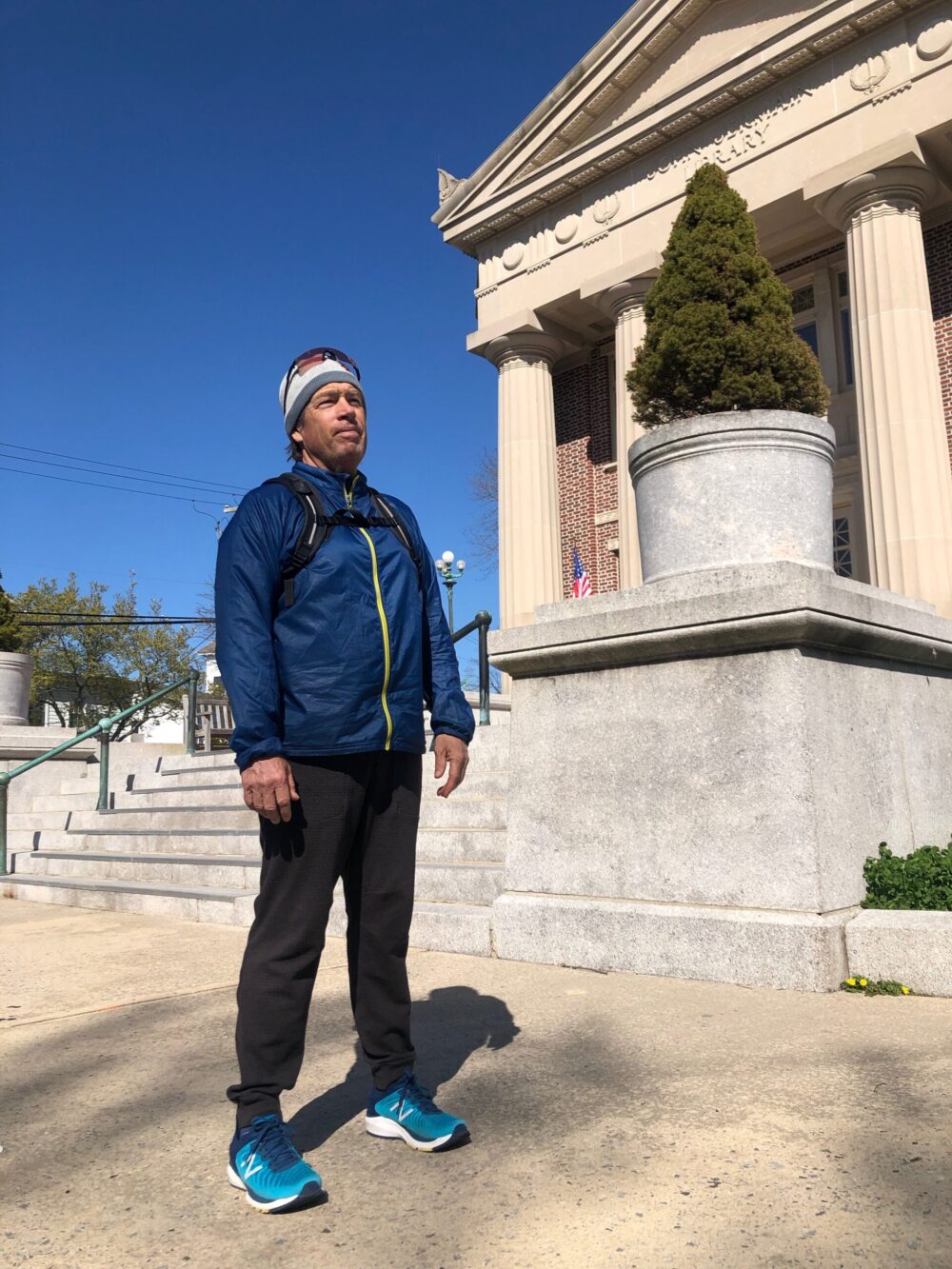 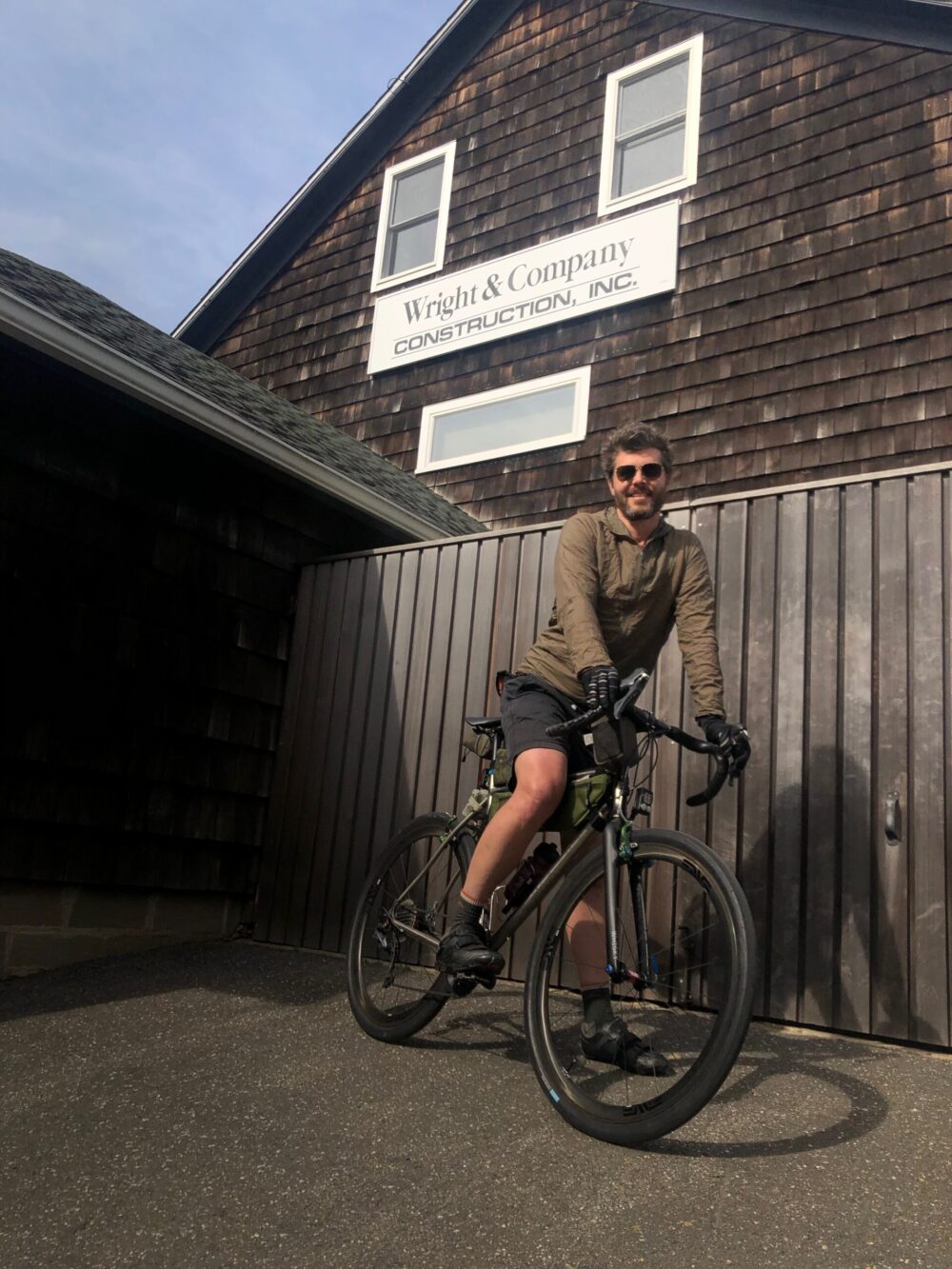 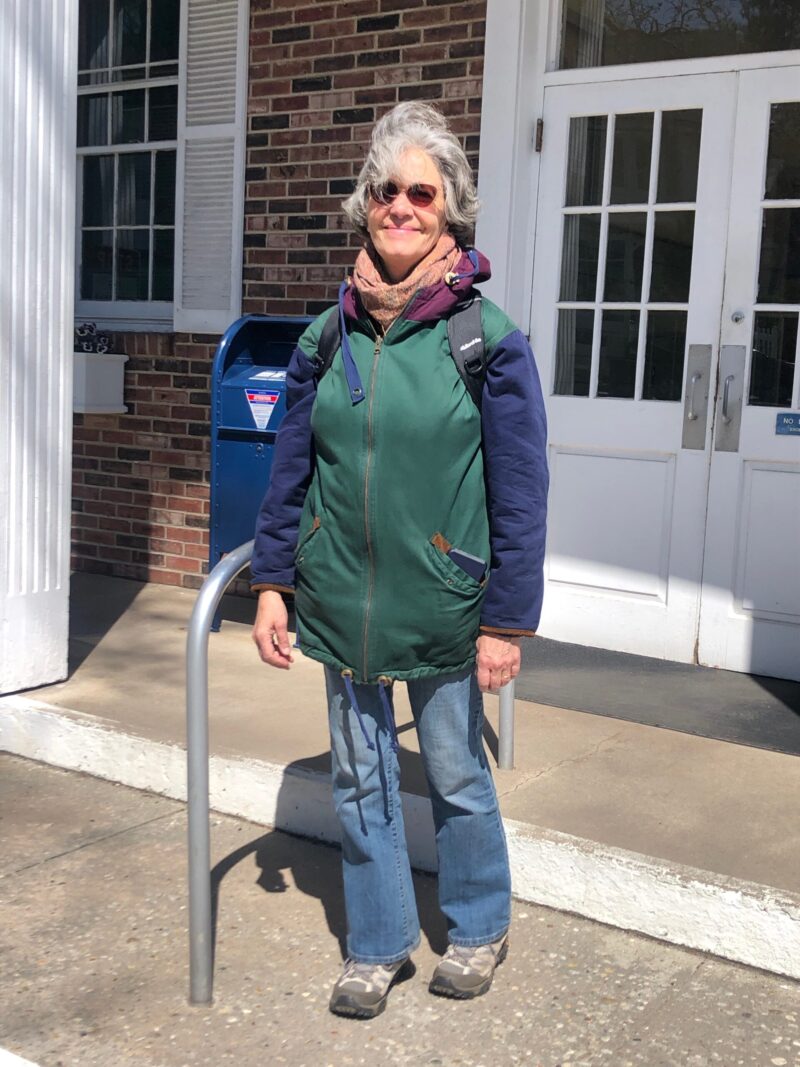 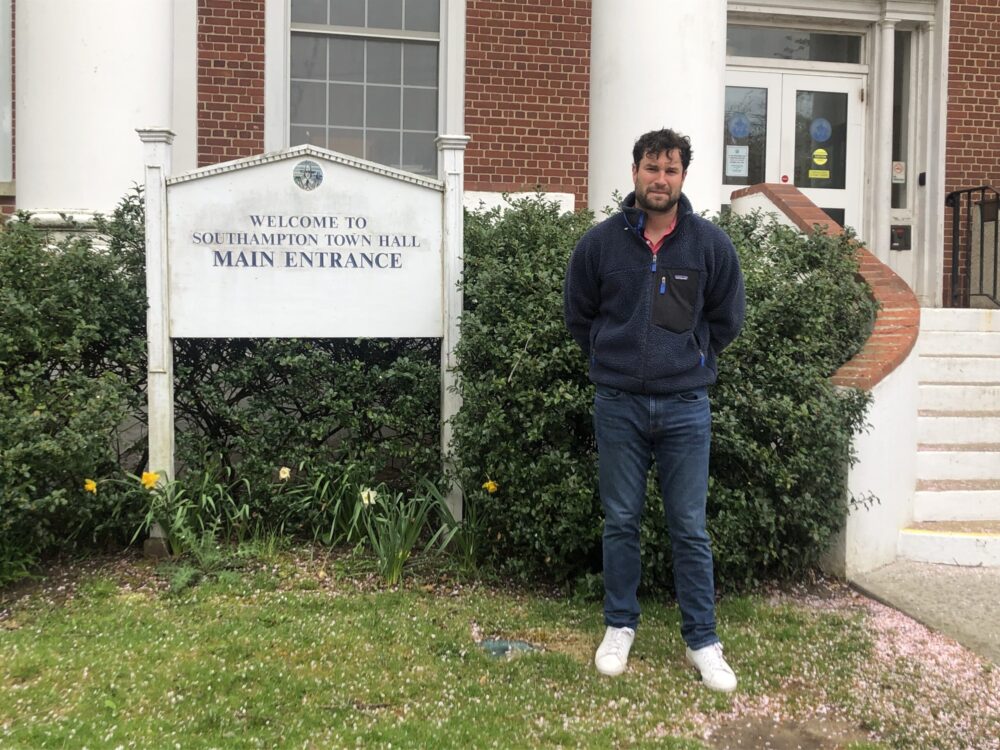 How many friendly folks have waved to you with their middle finger while sitting in traffic? How often have you wanted to poke your eyes out trying to find the elusive parking space in August? Beyond avoiding road rage (or in my case, parking rage), getting around by bike or foot are healthy, cheap, and fun ways to reduce CO2 emissions.

Because driving represents around 17 percent of all emissions generated in the U.S., by some estimates, the biggest personal cause of global warming, we need to start spending a lot less time in the car. Solutions like planting more trees and switching to EVs are important, but aren’t nearly fast enough to reach the goal of carbon neutrality by 2030. Walking and biking, on the other hand, can start curbing climate change today. Just put on your shoes and step outside.

This month, I caught up with some people who use human powered transportation and discovered that there are so many different reasons to ditch the car.

Two years ago, Billy Baldwin was out walking by Baron’s Cove and came up with the idea of a monster making cellular DNA milkshake, as one does. Instead of restlessly sitting at his desk, this children’s book author walks in order to work out the details of a story. Using the streets of Sag Harbor as his office, Baldwin takes the same “boring” five mile loop because he doesn’t have to stop and think about where he’s going.

In the book, “In Praise of Walking,” this is described as “cognitive mobility.” Movement changes our brain chemistry, and helps us think more clearly. The philosopher Friedrich Nietzsche went so far as to argue that, “Only thoughts reached by walking have value.” Baldwin has written 13 books thus far.

Walking is also social for Baldwin. He says, “You get to see so many people when you walk. You can’t not meet people in this town.”

Distance bikes: 6 miles round trip to the office.

It’s no coincidence that so many doctors out east bike to work. They know that it benefits much more than one’s carbon footprint. “The fountain of youth is keeping in shape,” says Dr. Stephen Bensen, who’s 61 and has been biking to work for nine years. “Ninety percent of why I bike to work is because I want to stay in shape, but I also bike for my mental health and the environment.”

Biking reduces the risk of diabetes, heart disease and obesity for starters. It also helps keep the brain in good working condition, improving cognitive control, learning and memory. It changes our brain activity to improve hearing, sight and reaction times.

Doctors more focused on the task at hand? That benefits us all.

When Zivile Ngo was nine months pregnant with her second child, she started riding an electric bike to town. Today, she’s all over East Hampton, e-biking her five year old to John Marshall Elementary School, grabbing a coffee, grocery shopping with her toddler and then stopping at the playground.

She points out that on an overcast day in midsummer, when traffic is backed up and parking lots are full, biking is the easiest way to get around.

Ngo never races from point A to point B. She tells me, “We stop and talk to the chickens… take a side trip to the duck pond.” Myself having never managed this kind of chill, I admire what her husband calls her “La-de-da” approach to the day.

The Danish philosopher Soren Kierkegaard once wrote, “Every day I walk myself into a state of well-being. I have walked myself into my best thoughts, and know of no thought so burdensome that one cannot walk away from it.”

Kierkegaard and Sara Gordon both like to walk it off… whatever that it is. She describes the bucolic paths she takes on Shelter Island as “pure therapy.” Many a bad mood has dissipated and problems solved with the miles she clocks. Gordon explains that she feels a lightness and joy when walking.

Gordon aspires never to take a car when she can walk. “Before I get in the car, I ask myself, ‘Do I really need to make this trip?’”

Distance bikes: 30-40 miles round trip mostly on back roads.

Ian Anderson is the first person I’ve ever met to say that they like traffic on Route 27. “When you’re a biker, it’s actually safer when the cars are all bumper to bumper like a parking lot.”

It’s not exactly schadenfreude, but for this construction supervisor, commuting between East Quogue and Bridgehampton by bike is definitely about more than just exercise and fresh air. Commuting via bike is also faster in the summer because in a car he’d have to leave either “insanely early or too late to avoid commute traffic.” Unlike with a car, it’s also time unplugged. “I do it first and foremost for my head. I feel better about my life when I’m biking.”

Safety is paramount. He agrees with most cyclists that while Montauk Highway has a pretty good shoulder, one has to take precautions. “Always assume you’re invisible to drivers. Wait until the turning car makes eye contact with you before going.”

April Gornik reminds me of that iconic Army recruitment commercial, “In the Army, we do more before 9 a.m. than most people do all day.” Between her home in North Haven and The Church in Sag Harbor where she works, a whole lot gets done. She calls. She texts. She emails. She even gets in a nice chat with her 95-year-old mother in Cleveland. “I still love to watch the seagulls sweep over the bay … but it also feels good to get so much out of the way.”

Gornik started walking when her husband developed Type 2 diabetes and everything that she read said that walking is one of the best ways to manage the disease. She points out that her own health has improved immeasurably.

For whatever reason Gornik walks, she’s the real deal. How many people have owned a Tesla for eight years that only has 32,000 miles on it?

“Walkability is like garlic or onions. It needs to be in every recipe,” says Southampton’s environmental town planner Mike Lieberman. While he does walk to work each day, most of his energy goes into thinking of ways to make towns more bike friendly and walkable. “Safe and accessible paths shouldn’t be an afterthought, but built into the initial design,” he says.

The Planner needs our help. Go to public hearings and town meetings. Join the sustainability committee if your town has one.

Lieberman has a dream project: A rail to trail bike path running all the way from Hampton Bays to Bridgehampton using the old dirt service road that runs alongside the Long Island Rail Road tracks.

Several studies connect walking with increased community engagement. When Lieberman lived in Noyac and commuted to Southampton, he claims he wasn’t involved in anything. He jokes that now that he’s living in Southampton and walking to work, he’s “way too involved.”

What’s Your Reason To Ditch The Car?

If you live within a mile of town, take a test walk. If you live within two miles, and can find a safe route, try clocking how long it takes to bike. Farther out? Rent an e-bike for the day and see how much ground you can cover.

We’re not going to get to net-zero carbon emissions without dramatic changes in how we move about. If you’re feeling anxious about climate change, which reportedly 67 percent of you are, consider taking a walk to burn off the bad mood.

Personally, I think walking just makes us nicer. Have you ever seen somebody out for a stroll flip the bird?

Electric Bikes: e-Bikes are the fastest growing segment of bike sales for a reason — at 20 mph (vs zero mph traffic), you simply cover more ground. They’re perfect for hauling groceries, heat waves and keeping up with more athletic friends. They create much lower CO2 emissions than EVs, and most forms of mass transit. And of course, they save money. $1,600 to $14,000 (more than a beach cruiser, less than a Tesla). One day rentals are available at most East End bike shops.

Safety: Always wears a helmet. Get to know the roads. Install two rear view mirrors and daytime running lights — those bright flashing lights can be seen from 1,500 feet away.

There’s this recurring nightmare I had as a child where the McDonald’s “Hamburglar,” staple of ... 3 Jan 2022 by Staff Writer

Imagine you’re an albatross whose stomach is so bloated with plastic that you can hardly ... 13 Aug 2021 by Jenny Noble

Frying On A Global Scale

“A great irony of global warming is that the means of keeping cool makes warming ... 19 Jul 2021 by Jenny Noble
×