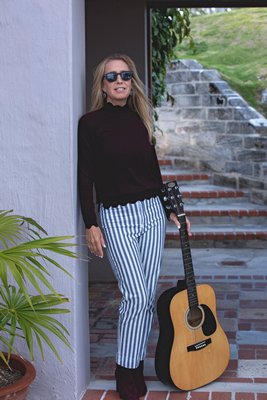 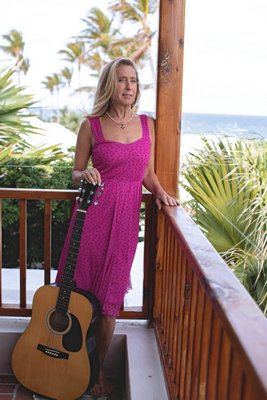 Taylor Barton is feeling quite at ease on the East End these days.

The singer/songwriter and her musician husband, G.E. Smith, have been part-time residents for the last three decades and have lived full-time in Amagansett for the last six years. Daughter Josie is a junior at the Ross School, and Ms. Barton and her husband have immersed themselves in the local artistic and music scene.

You could say that in this place, Ms. Barton has found a home through her core group of close friends, and a sense of community.

“I love the firemen and the people who work for the Postal Service,” said Ms. Barton during a recent interview at c/o The Maidstone in East Hampton. “I had a fire, and they were there in two minutes. I also have a particular love for the post office people … they put up with so much B.S.”

But it is her many creative avenues that truly sustain Ms. Barton on the East End. Besides appearing regularly on stage with Mr. Smith at venues like the Stephen Talkhouse, which is within walking distance of their home, and Bay Street Theater in Sag Harbor, her most recent creative foray came this past summer in East Hampton, when she produced “Guitar Masters” at Guild Hall’s John Drew Theater and, with her husband, “G.E. Smith’s Portraits” concerts. Both series brought stellar musicians to the area, including the Avett Brothers, who played a sold-out show in August.

“Those guys are spiritual without calling themselves spiritual. They come out of the Southern gospel tradition but are great craftsmen,” said Ms. Barton. “G.E. and I do a lot here in the community, and I had a great summer at Guild Hall.”

Ms. Barton recalls that the first time she laid eyes on the John Drew Theater was back in the 1980s, when she went there to see a Tallulah Bankhead tribute.

“It’s so good to have something like that here. I was really excited when they asked us to do the series. They are bringing in new blood, talent and the younger generation,” she said. “To come full circle and be fully engaged in it is so cool for us. I feel really connected to the community and really rooted now … We’re happy here.”

Ms. Barton has another reason to be happy: her 10th album, “House of Light,” which will officially be released on November 9.

The recording comes in the wake of a difficult period in her life, both personally and in terms of events taking place in the wider world. While some of the songs reference the turmoil spinning around us all, they do so in an empowering and healing way. Which is why, ultimately, Ms. Barton sees this record as the calm in the midst of these many storms.

“I wrote this record over a five-year period,” explained Ms. Barton. “It was during the loss of my mother, and my daughter’s best friend, who committed suicide at 15. G.E.’s father died, I moved, I got a new job, I settled my mother’s estate.

“There was so much upheaval,” she said. “That’s where I went to make this record.”

Ms. Barton points to the track “For Those Among Us” as one that pays subtle tribute to the #MeToo movement, while “Where Did You Go” speaks to the pain of losing someone to suicide.

“It can also be a metaphor for anything—the country, the ideology, where did the goodness go?” said Ms. Barton, who stresses that “House of Light” is not an album designed to incite anger or spur action. Instead, she sees it as a safe space for introspection and looking inward.

“With this record, I hope to make people feel calm and centered and give them a sense of breath. It’s like Norah Jones’s ‘Come Away With Me.’ After 9/11, everyone had the record,” added Ms. Barton. “I feel very deeply, and I feel hurt for everyone and the planet. There is provocation going on for everybody and every reason. I address that in this record, but I think calm and silence can say a lot more than angry protest.”

Ms. Barton concedes there are a lot of personal emotions embedded in the narrative of the album as well, including a less tangible sort of loss that came with the death of her mother in 2015—that of her hometown, Baltimore, Maryland. Now that her mother is gone and no family remains in the area, she describes the strange emotions that result, as they do for many people after parents die, when ties no longer bind us to a place that was once so important in our lives.

“It’s like being orphaned. I go to Maryland and I feel like a ghost,” said Ms. Barton. “But having been here 30 years now, I feel I have roots. I know people here, but they don’t know you like someone you grew up with back when you didn’t have to be something … you just were. Reconciling that was an unexpected surprise.”

Which is why this album and its many revelations is very much a personal reflection of who Ms. Barton is a singer, songwriter, musician and storyteller. The recording is distinctly her own, with lilting melodies combined with the soulful feel of the heartland—a style that she explains is no accident.

“I love very acoustic-oriented music and blues,” said Ms. Barton. “Since I was around G.E. and a lot more rock players, I didn’t initially know how to say what I wanted to. I just fit myself into it. But for this record and the last one I made, I was very specific that this is what I want it to sound like.”

When asked how she would describe her own musical style to those who haven’t yet heard her sing, Ms. Barton quotes concert promoter and fellow East End resident Ron Delsener, who told her she was “Edie Brickell meets Norah Jones.”

Beyond her own musical ability, also on full display with “House of Light” are the talents of a stellar lineup of musicians—Ms. Barton’s husband included—who bring a touch of rock and that American roots sound she loves so well through the inclusion of banjo, mandolin and a collection of guitars.

Many of these musicians are included in Ms. Barton’s and Mr. Smith’s close circle of musical friends. Among them are Tony Shanahan, Patti Smith’s band leader and producer of “House Of Light,” who also lends his talents on bass, background vocals, acoustic guitar and synthesizer to the album. Mr. Smith is on the record too, playing bass, acoustic, slide and electric guitars and mandolin, alongside Grammy Award-winning Sarah Jarosz, a young musician whom Ms. Barton has long admired.

“She played banjo and mandolin on the record and was on harmonies,” said Ms. Barton. “She’s 25 years old. I brought her into Guild Hall for ‘Portraits’ last year. I had heard of her, which is why I booked her. G.E., who is not often wowed, said, ‘She is so magical.’

“The mandolin and banjo bring a sense of joy,” she added. “I wanted to really have it be that a person can have the record on and find themselves going in and settling down to find a sense of peace.

“G.E. and I have said music is our politics, with no sides,” she said. “Music is a universal language.”

On Saturday, November 24, Taylor Barton will perform with “Ricky and The Rockets,” featuring G.E. Smith, Supertramp’s Rick Davies and Mike Reilly of Pure Prairie League, at the Stephen Talkhouse, 161 Main Street, Amagansett. The show begins at 7 p.m., and tickets are $100 at stephentalkhouse.com.

Taylor Barton and G.E. Smith also will perform together at City Vineyard at Pier 26 in New York City on Thursday, November 8, at 8:30 p.m., followed by a show at the Haymarket Lounge at City Winery in Boston on Friday, November 9, at 7:30 p.m. On Saturday, December 8, at 8 p.m., Ms. Barton will share the bill with Wesley Stace at The Locks at Sona in Philadelphia. Visit taylorbarton.com for details.