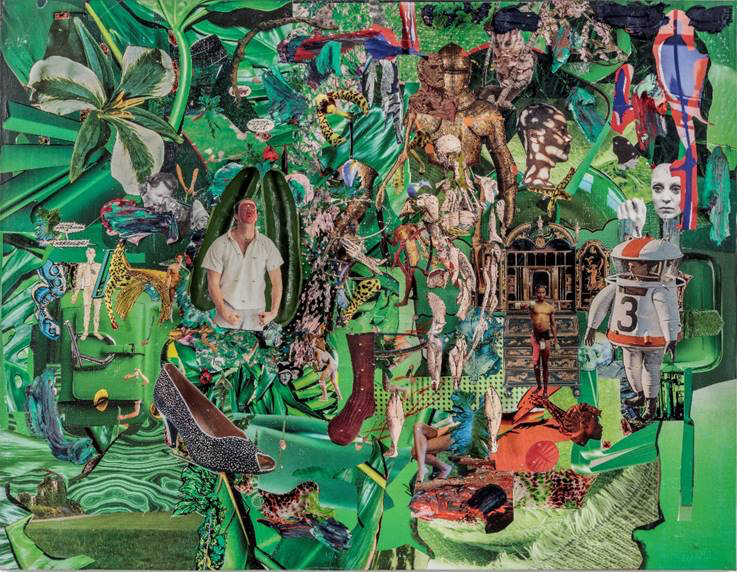 On Friday July 3, at 5 p.m., artist Elliott Hundley, whose work is featured in “Telling Stories: Reframing the Narratives,” discusses his dense, complex scenarios that mimic the deluge of information in the digital age, with exhibition organizer adjunct curator David Pagel. The image glut of modern life takes sublime shape in Hundley’s mixed-media pieces of participatory theater in a world supercharged with desire and dread. The public is invited to join the talk, part of the museum’s “Friday Nights Live!” series, and take part in a live chat following the presentation. Log in information is at parrishart.org. Hundley is one of eight artists whose work is featured in “Telling Stories,” which highlights the role that narrative plays in understanding the world through their unique personal histories. The robust online adaptation of the exhibition was produced by curatorial assistant/publications coordinator Savannah Petrick. “I’m delighted to continue our series of talks connected to the now digital ‘Telling Stories’ exhibition with Elliot Hundley, and listen to him unpack his incredibly rich, complex, and timely visual tales,” said Corinne Erni, senior curator of ArtsReach and special projects.  Los Angeles-based artist Elliott Hundley (b. 1975) pulls references from his Southern heritage and family history, Greek tragedy, politics, and pop culture. Each of the artist’s mural-scale collages — or bas-relief sculptures — is a universe in which viewers lose themselves in the myriad details yet find themselves in a world not all that different from the real one: chaotic and crazy and all-consuming. Hundley’s works are a whirlwind tour of ancient Greece by way of Antonin Artaud rife with rationality and balance of classical antiquity as well as the mayhem made famous by the plays of Euripides and Sophocles. Hundley’s dense constellations of imagery invite viewers to ponder the relationship between individuals and the vast sprawl of the human race, along with the overdose of visual stimulation available, 24/7, on the internet and via instantaneous digital communication.