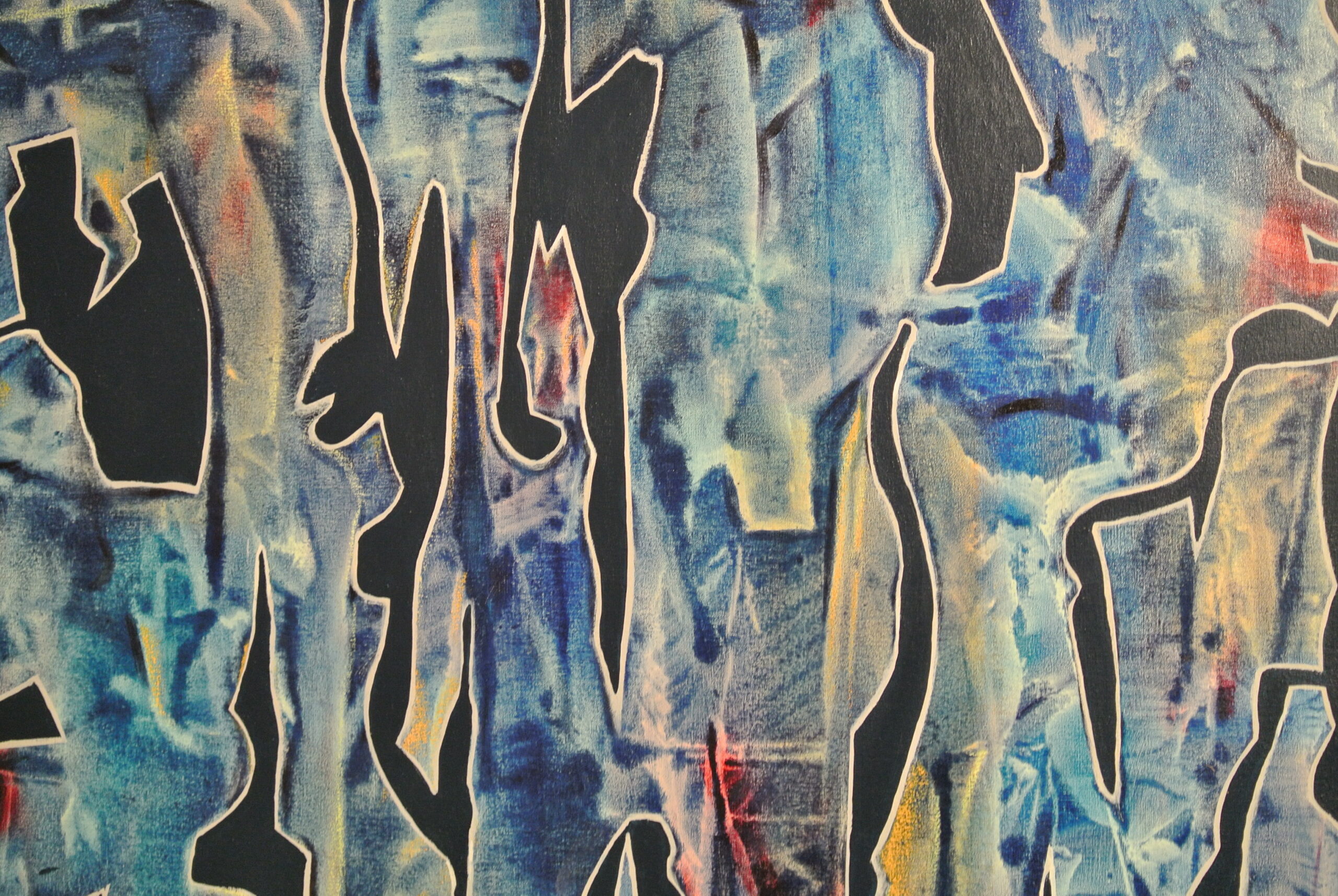 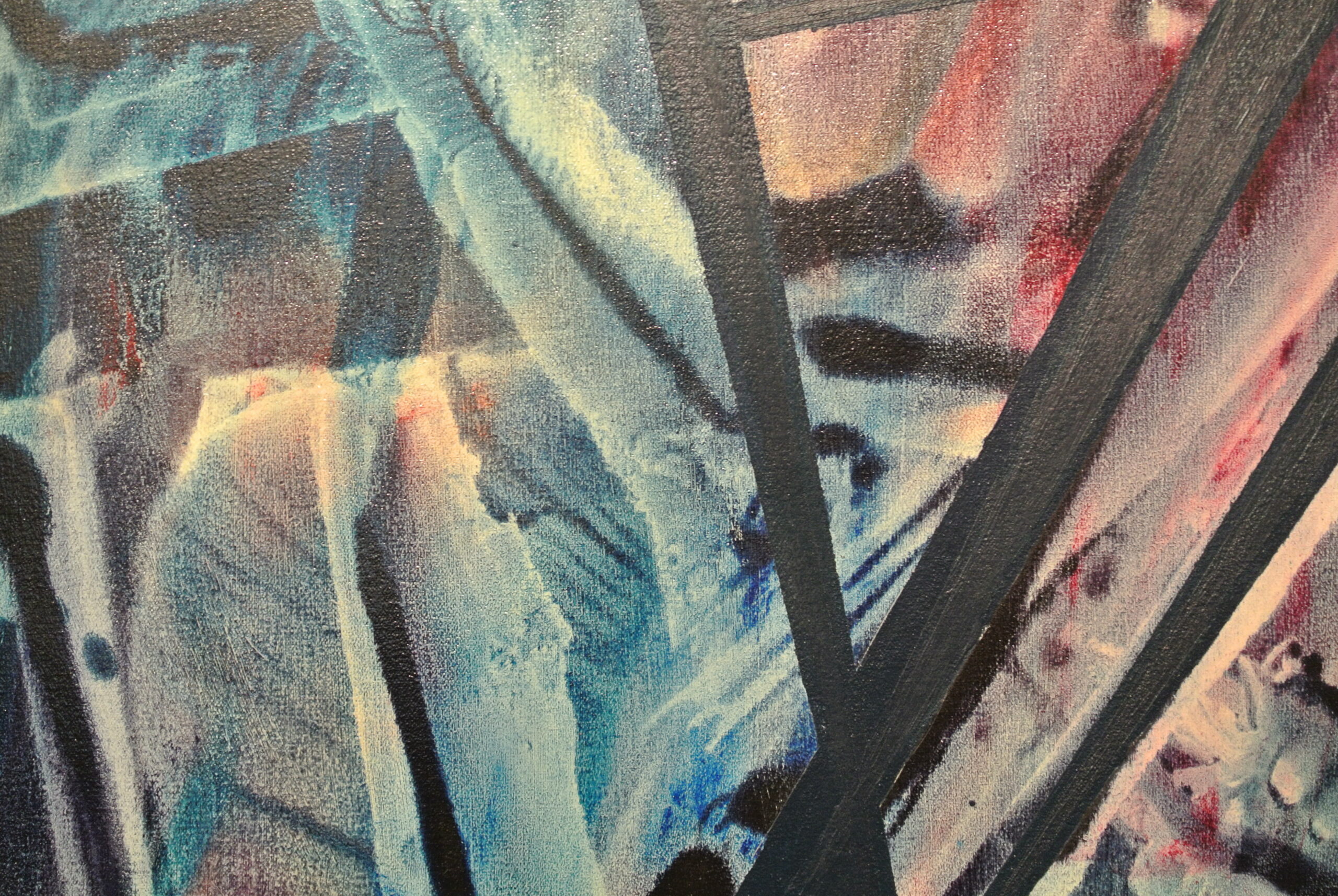 Detail of "Short Circuit," 1990/93. Netter added a bit of a computer's motherboard along with a border and jagged lines. 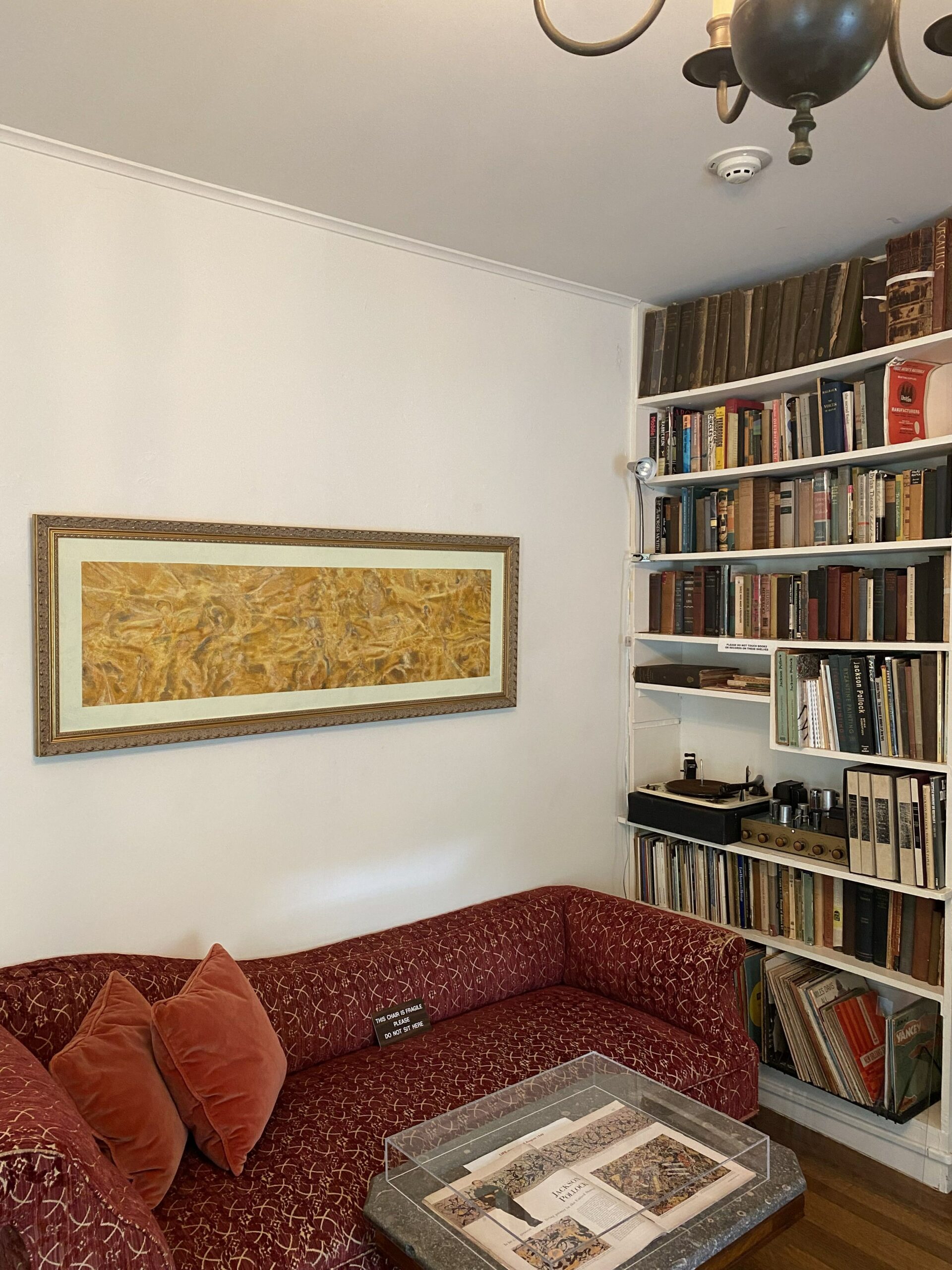 An untitled work of Netter's from the 1960s hanging in the Pollock-Krasner House. 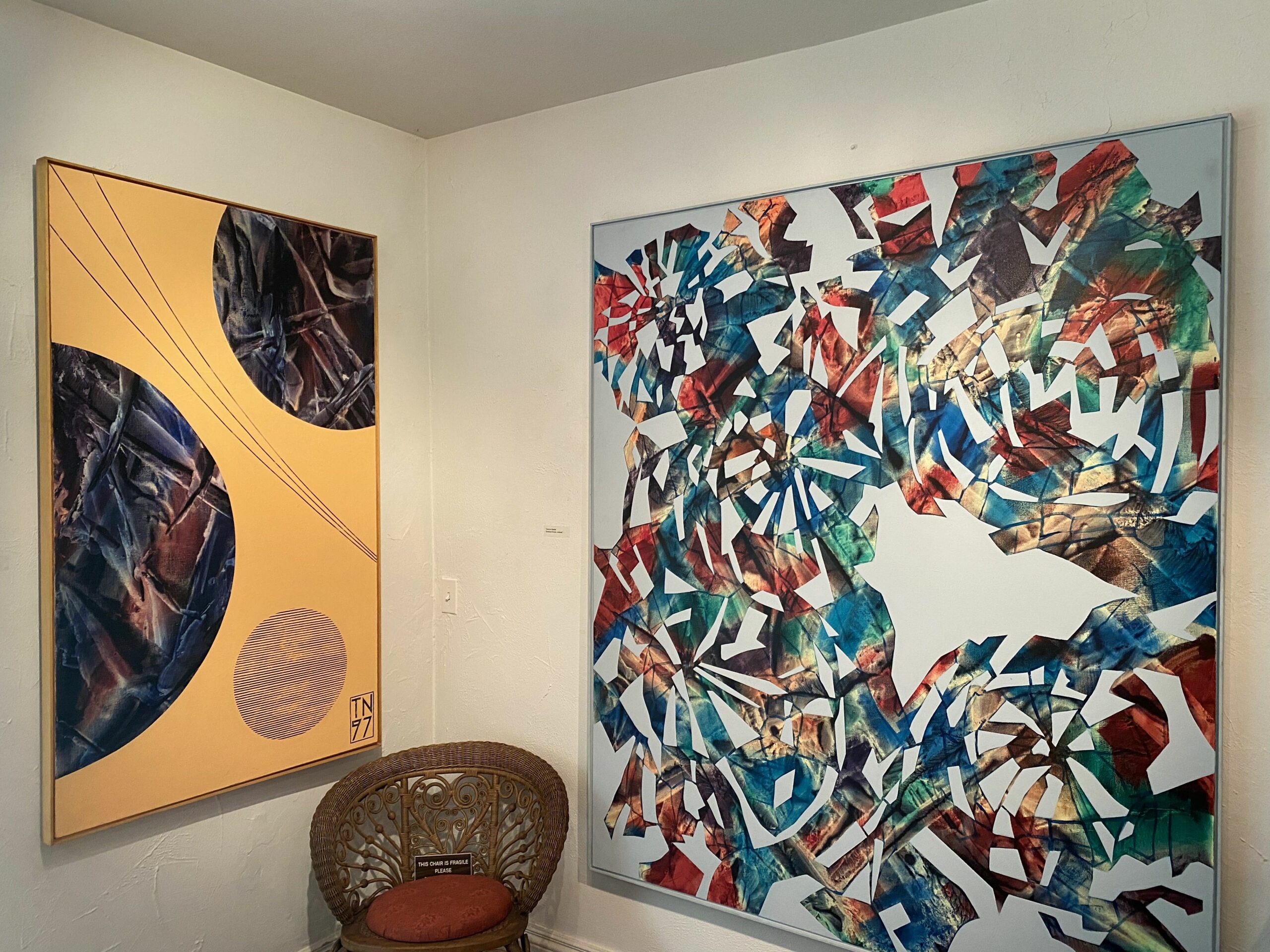 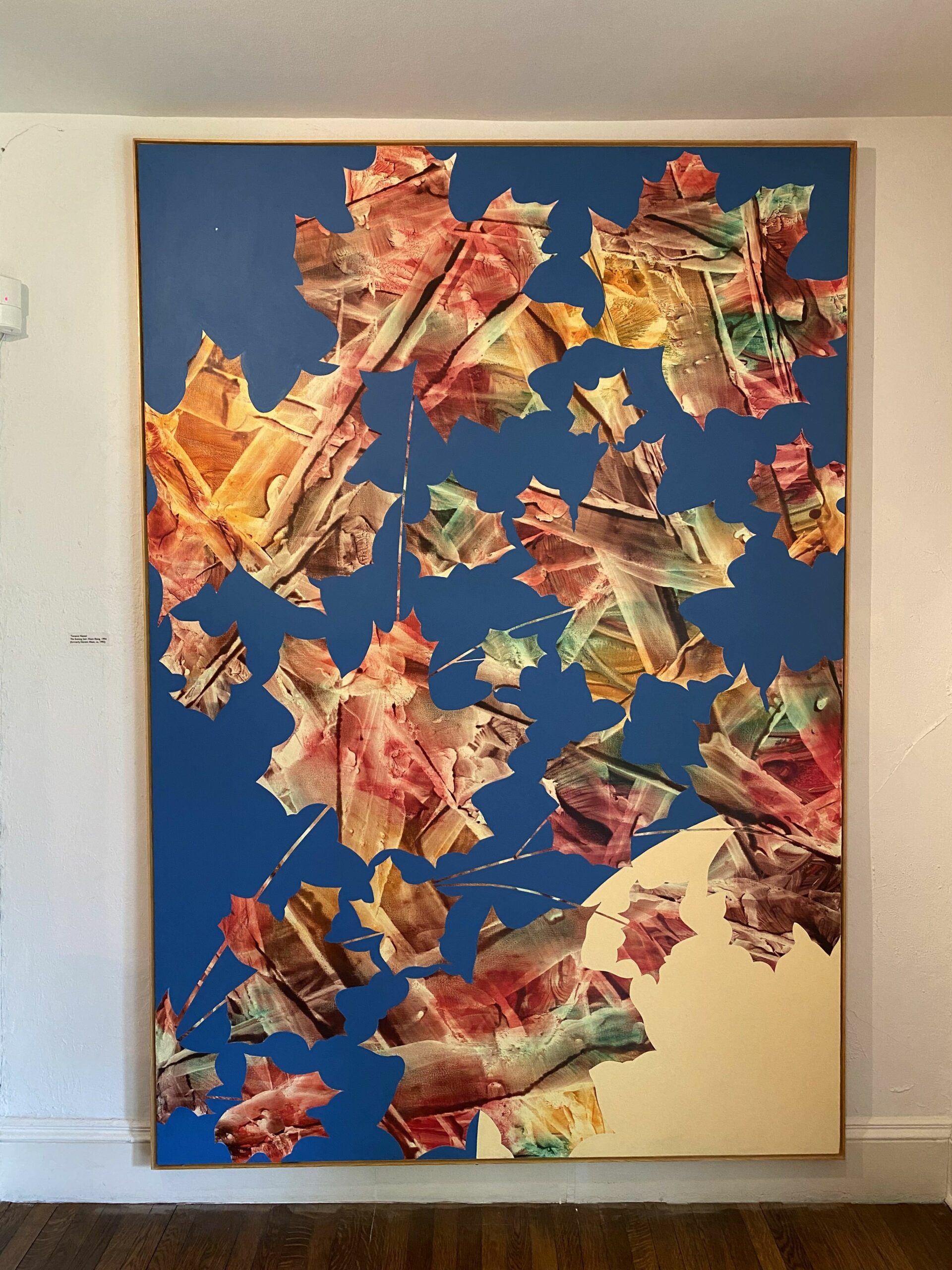 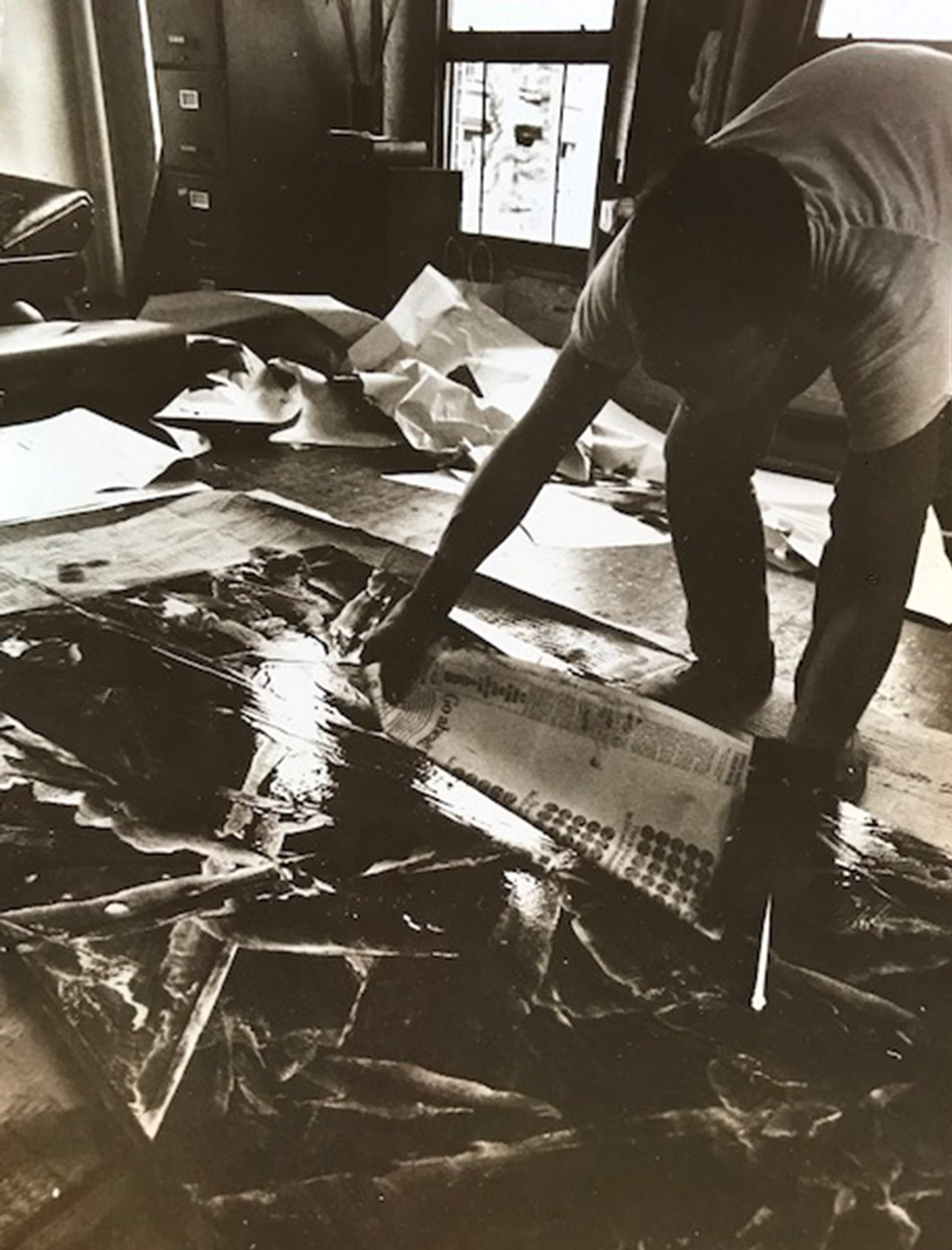 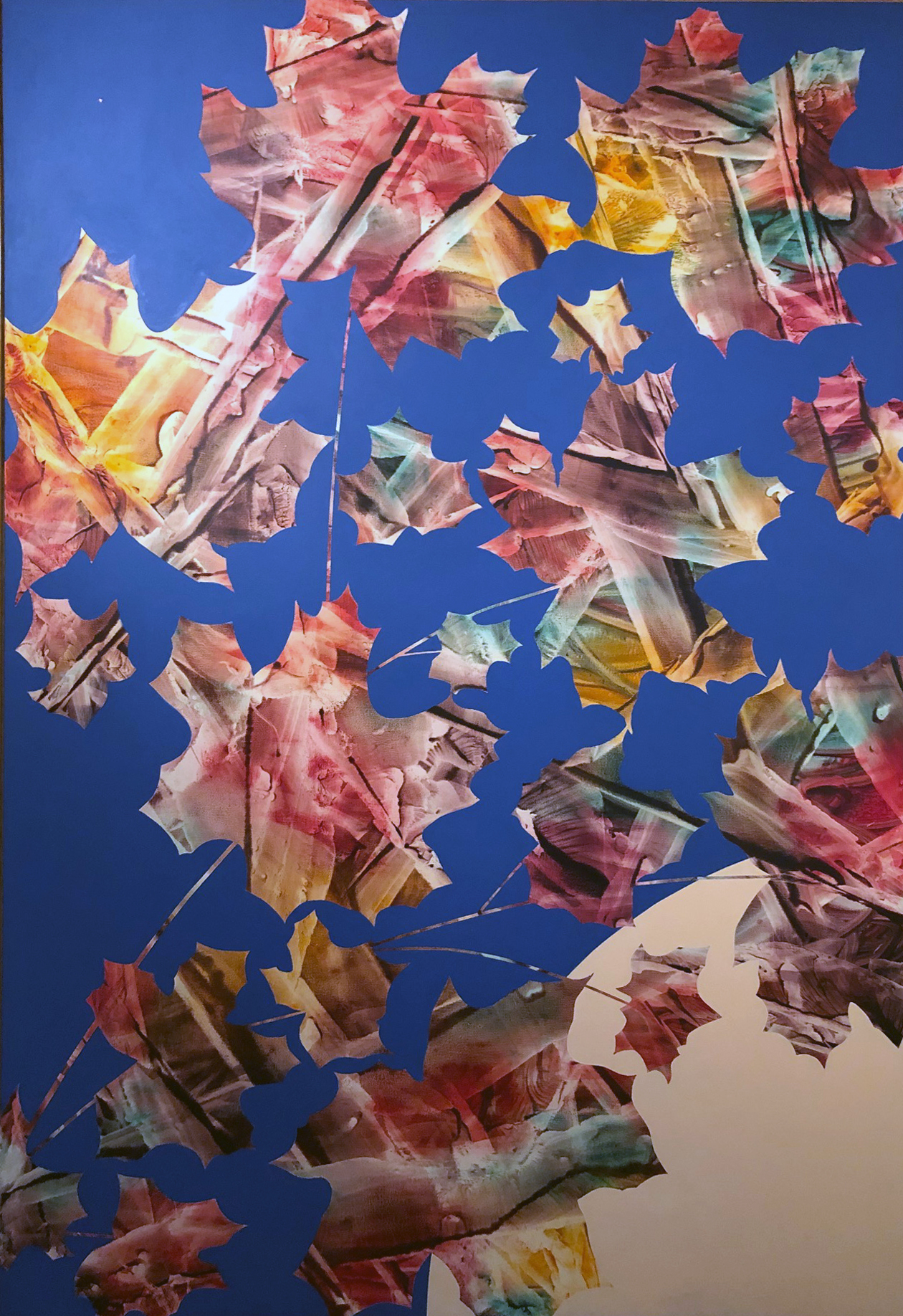 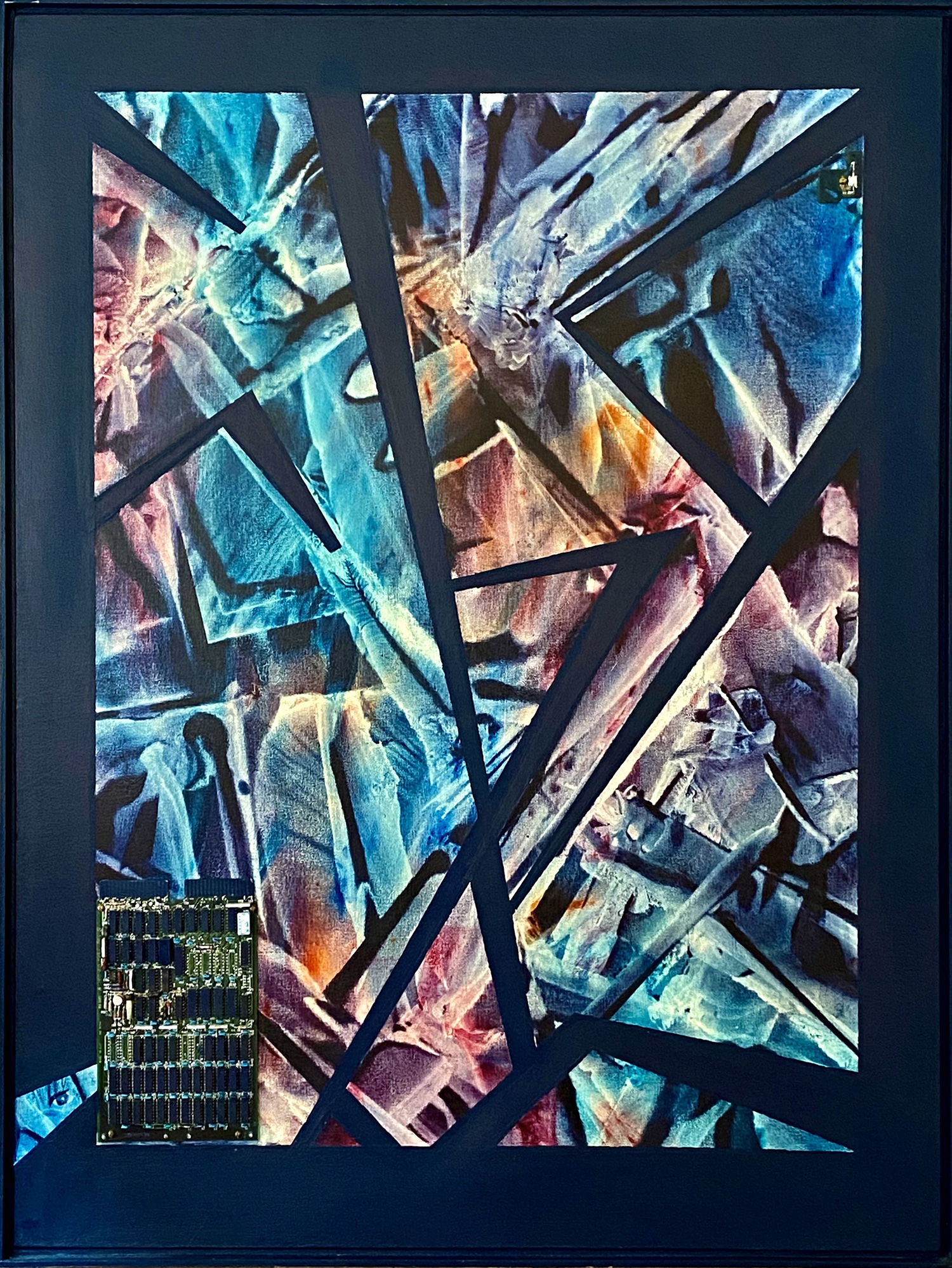 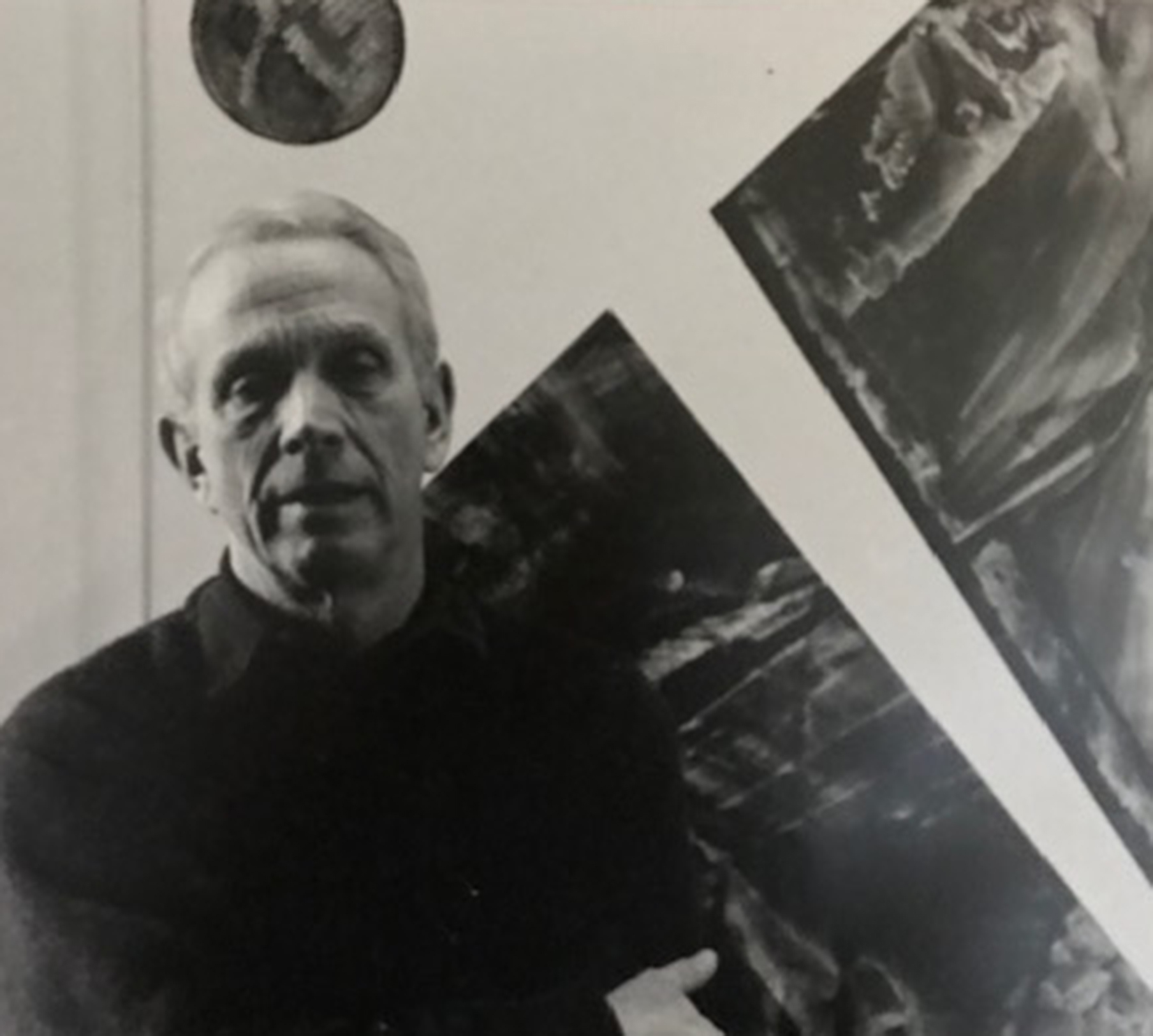 Terence Netter with Sunday, about 1990. 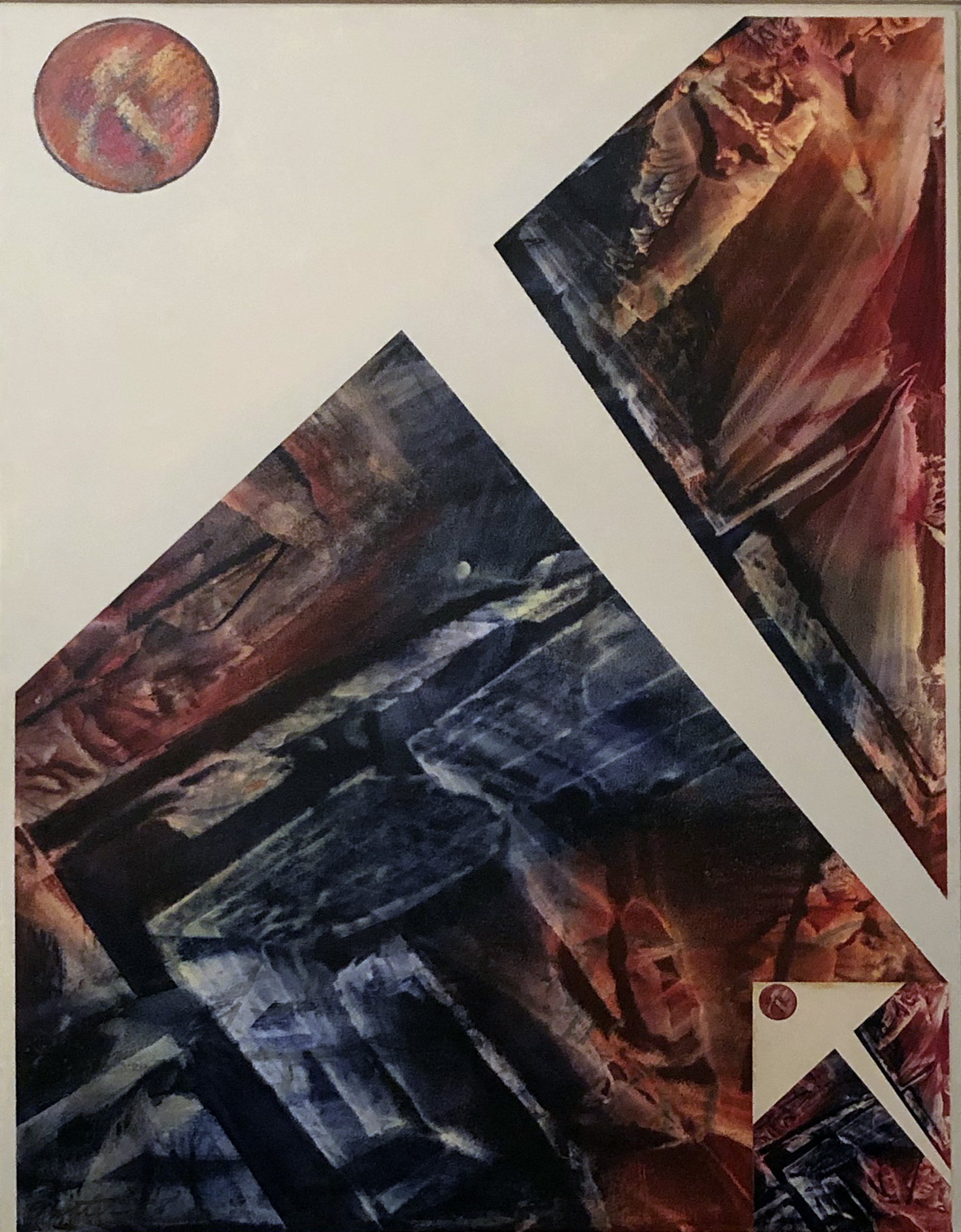 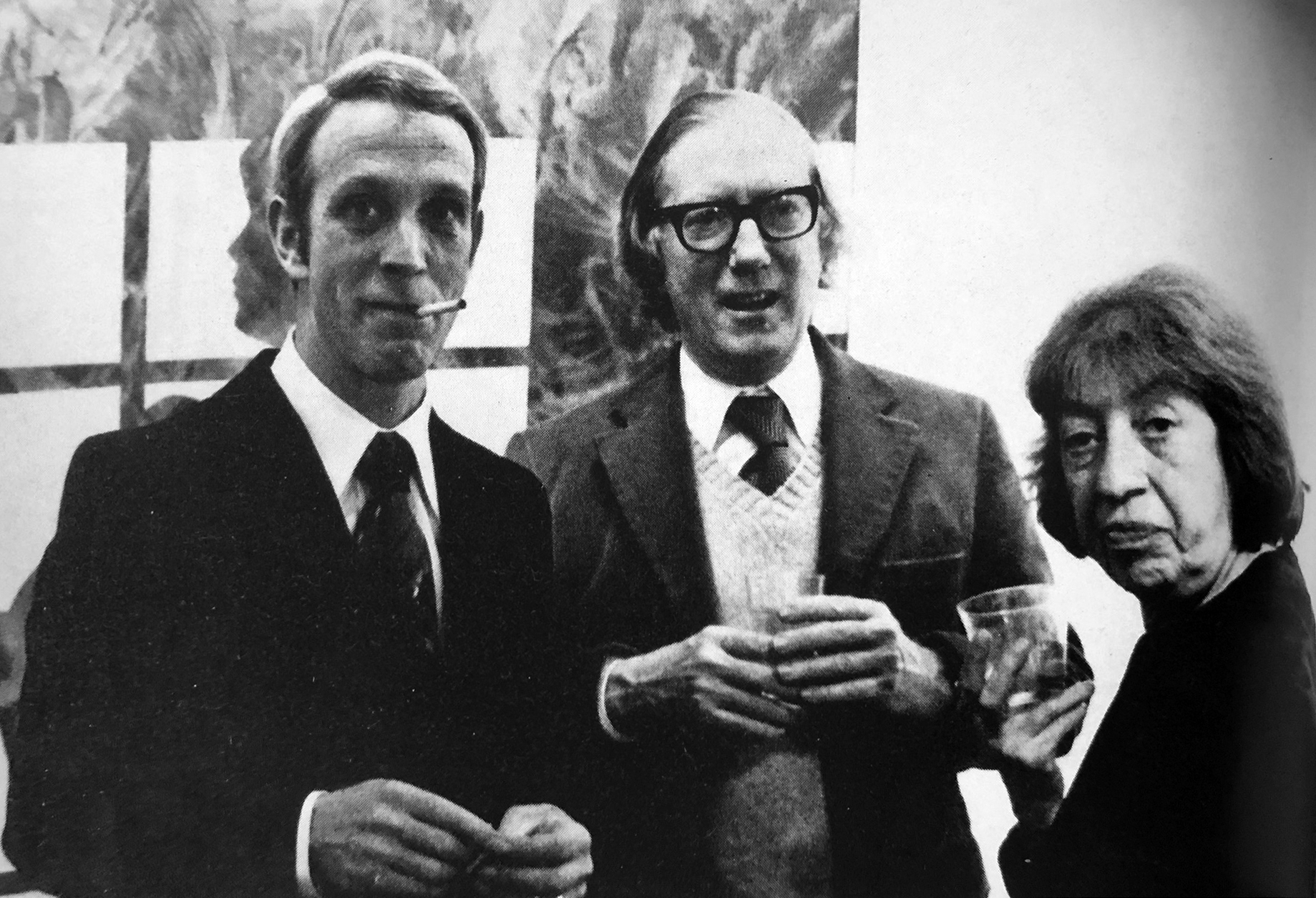 There’s a popular edict among writers: the best writing is rewriting. While there may not be a similar saying for painters, the work of the late Terence Netter, on view at the Pollock-Krasner House and Study Center in Springs through July 31, is a testament to the role of revision in visual art.

That it is on view at the Pollock-Krasner house is apropos for a number of reasons. First, Krasner, a close friend of Netter’s for many years — they met when his MFA class visited Springs and she was taken with Netter when he asked her about how one of her dark, grief-inspired Umber series paintings made her feel — joked that she couldn’t be trusted around her finished work. A continual revisionist, her constant re- and over-painting is one reason that her body of work is actually quite small.

Secondly, Netter was instrumental in the creation of the Pollock-Krasner House and Study Center as it currently exists. Netter was the founding director of Stony Brook’s Staller Center, and worked with the Stony Brook Foundation to execute what Lee Krasner had envisioned for the property. Her will instructed her executors to deed the property to a charitable institution and create a public museum and library for the study and exhibition of her work, Pollock’s, and other artists of the time. The Stony Brook Foundation became that charitable organization, and her wishes were carried out.

Netter, a lifelong artist, was also a man of God. A New York Times feature article in the 1960s dubbed him “The Priest Who Paints.” Netter, a Jesuit, studied under the influential theologian Karl Rahner in Austria and was heavily impacted by The Spiritual Exercises of Ignatius of Loyola, which the founder of the Jesuit order developed on a retreat while recovering from a leg wound. They were, and are, a guide for deepening one’s connection to and love of God.

In the late 1960s, a debate was raging about letting priests get married. Netter, who had fallen in love with Therese Franzese, hoped that the church would change. Unfortunately, they didn’t, and Netter received papal permission to leave the Jesuit order so he could marry Franzese. They had met because her brother was his student and Franzese, who worked for the Metropolitan Opera at the time, would attend Father Netter’s services. In a 1968 Life magazine, their story was written up as “A Priest Who Chose to Marry” and more recently their relationship was the subject of a New York Times documentary about the Netters called “The Spiritual Exercises,” released in 2020.

Professionally, Netter was an educator alongside his painting career. He taught at Georgetown, Fordham, Choate, Santa Clara University and Stony Brook, among others, mostly the subjects of aesthetics, theology, and philosophy.

His artistic practice was lifelong and varied across the decades. One of his primary techniques was frottage. Netter would add turpentine to oil paint and use newspapers, laying down the newsprint and peeling it off to create works with depth and transparency which suggest that more lies behind. The works are highly charged, colorful, and dense with meaning. Often their titles were Biblical — “Creation,” “Eden,” “Pentecost,” to name a few. Abstract, they were more concerned with capturing an inner image or a nonliteral subjectivity. And their three-dimensional, or transcendent, quality means they seem to gesture beyond this realm. Although the church “reduced” him to a member of the laity, Netter’s faith remained strong and animating. Later in life, he became a devotee and practitioner of Zen meditation, creating a series of Zenscape paintings inspired by contemplation. His work seems to speak to this connection to spirituality.

The works in “Visions and Revisions Revisited” are into their second, or maybe third, existences. While not all of the original works are documented, each was once a finished painting that Netter took down from a wall and went back to work on.

“Evening Star: Moon Rising” — formerly “Harvest Moon” — went through a series of revisions. First, it was an all-over composition of his frottage technique. Then, Netter painted over it, adding leaves that the underlying work peeked out through, and a moon. Not satisfied, Netter rotated the canvas, enlarged the moon, and added a small, shining star. In “Untitled,” a work originally called “La Baroque,” Netter took an underlying indigo and purple composition and painted gold over, 30 years later. The final work creates three globe shapes and sweeping lines that render the charged abstraction slightly more figurative. Some revised works became three-dimensional; in “Shattered Dream,” Netter added on a piece of a computer’s motherboard as well as an oil paint border and jagged lightning shapes.

Krasner and Netter shared a penchant for overhauling their previously-finished work. And although Krasner was not traditionally religious, she liked Terence and Therese for their rebellious streak and the two connected over aesthetics, art and philosophy. For both Krasner and Netter, art meant a devotion to the creative life, an animating power that was both external and deeply internal. A spiritual exercise, if you will.

“Terence Netter: Visions and Revisions Revisited” is on view at the Pollock-Krasner House and Study Center, 830 Springs-Fireplace Road in East Hampton, through July 31. Advance reservations are required. For more information, visit stonybrook.edu/commcms/pkhouse. Pollock-Krasner House, a member of the National Trust for Historic Preservation’s Historic Artists’ Homes and Studios program, will be open to the public as part of an Open House on Saturday, June 25, from 11 a.m. to 3 p.m., along with Madoo Conservancy in Sagaponack, Moran House in East Hampton Village and the D’Amico Studio & Archive in Amagansett.