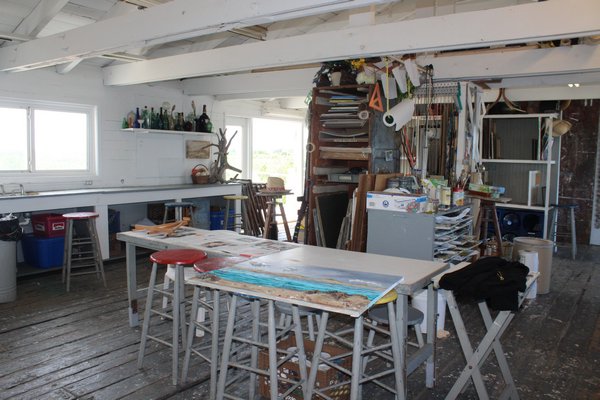 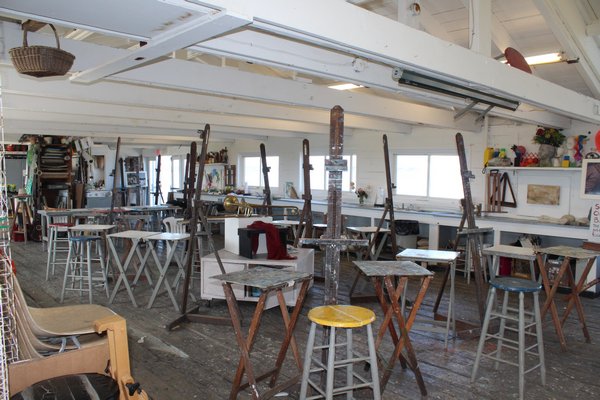 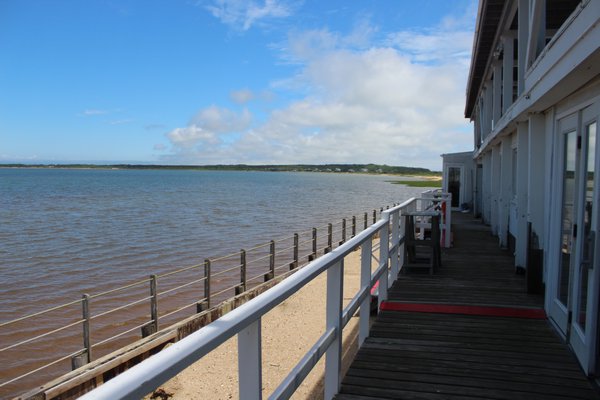 Step inside the Art Barge in Amagansett, and you’ll feel as if you’ve been sailed out to the middle of the Atlantic Ocean.

Literally a retired 500-ton World War I Navy barge, the Art Barge was tugged to Long Island in 1960 by art educator Victor D’Amico, and has sat proudly on the shore of Napeague Harbor ever since.

For nearly six decades the vessel as served as a hub for arts education on the East End, the vast seascape view serving as an endless source of inspiration for the artists who gather there. It is one of the two sites that encompasses the Victor D’Amico Institute of Art, the second being the former home of Victor D’Amico and his wife, Mabel D’Amico, at Lazy Point.

The Art Barge came into existence when Mr. D’Amico, who served as the founding Director of Education at the Museum of Modern Art in New York City from 1937 to 1970, decided that the East End would be a perfect location to establish a summer art program.

“He thought that a place on the boat near the water would be a great environment for the artists,” Art Barge President Christopher Kohan said. The structure still stands as it did 60 years ago and, according to Mr. Kohan, “nothing is new except the people.”

Artists of all ages and experience levels can sign up for classes in the many realms of visual art offered from June through September: pastel, watercolor, drawing, painting, collage, sculpture, ceramics, encaustic, printmaking and photography.

Sessions are priced at $200 per week, and provide artists with 15 hours of professional instruction. All revenue from classes is used for the cost of instructors and art supplies for the nonprofit establishment.

Though classes are in a group setting, each artist receives individual instruction, which is something that Mr. Kohan believes sets the Art Barge apart from other arts education institutions.

“Everyone paints independently, but you’re in this group setting so that you can learn not only from the instructor but from each other,” Mr. Kohan explained, nodding to the varying mix of subjects depicted on canvases throughout the studio. “Victor also felt that it was a wonderful social interaction experience. Here, you’re interacting with different people from different walks of life and different backgrounds, and it really helps breaks down barriers.”

The main level of the barge consists of a large painting studio as well as a clay studio and gallery area, where the exhibition “The Finder’s Eye,” will be on display from June 30 through July 28.

The second floor, added in 1963, is cantilevered over the original barge structure, and the wrap-around deck boasts a panoramic view of the harbor, dunes and the ocean. The upper level hosts a library and lecture room with art education books, as well as a room for parent-child workshops, which features tables with adjustable legs to accommodate shorter children, something that Mr. Kohan said adds to the charm of the Art Barge.

Found off the beaten path of where most go when visiting the Hamptons, the barge has stood all these years as a result of the dedicated artists who come there to create.

“For all the changes I’ve seen in my life in the last five decades on the East End, this is one of the few places that has kept its core educational principles and value,” artist Karen Kiaer said while working in the clay room. It is the only way to teach art, and it’s the only way that works. There’s nothing as good at this.”

Artists often consider the Art Barge a “hidden gem” on the East End, according to Mr. Kohan, “hidden” being the key word.

“We don’t want too many people coming here,” longtime Art Barge artist Ann McNamee said. “Everybody loves it here. Everybody looks forward to its opening and dreads when it closes.”

Though the Art Barge currently closes during the colder months, Mr. Kohan said he believes that winterizing the facility is possible with proper fundraising and volunteer involvement.

“The landscape suddenly becomes monochromatic: blue, white and beige,” Mr. Kohan said of Napeague Harbor in the winter. “People go to Antarctica and Alaska to see this, and we have it right here.”

Before turning the Art Barge into a year-round operation can become a possibility, administrators are making an appeal for funds that will go toward fixing the vessel’s weather-damaged bulkhead.

In an ever-changing East End, Mr. Kohan said the Art Barge has never lost sight of the vision the D’Amicos saw for it many years ago, and that the institution still stands by its founding principles.

The Art Barge will host a “Barge-In” open house from Monday, July 2, through Friday, July 6, during which a special series of free classes will be taught by artist and museum education researcher Sara Torres Vega. Those interested can register for the entire week or daily sessions. A reception for “The Finder’s Eye” exhibition will be held Sunday, July 1, from 11:30 a.m. to 1:30 p.m. For more information, call 631-267-3172 or visit theartbarge.org.