The dean of documentarians checks in at Film Festival - 27 East

The dean of documentarians checks in at Film Festival 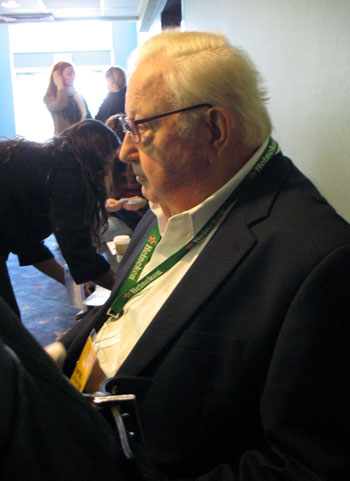 Before the internet, before 24-7 cable news, before cable, before the televised Kennedy-Nixon debate forever changed how political campaigns were run, Robert Drew was on the campaign trail, changing forever how documentary films are made.

Mr. Drew, a staffer at Life magazine, and his crew were filming a neophyte senator vying for the Democratic nomination for president while experimenting with what they considered to be a “new kind of journalism.” They used homemade, handheld cameras and synchronous sound equipment—a combination never attempted before—guided by the belief that unobtrusively observing actions and dialogue would yield unique insight into the character of their subjects. The resulting 53-minute film, “Primary,” was the first example of cinema vérité filmmaking in the U.S. The senator was John Fitzgerald Kennedy.

Three decades later, one of Mr. Drew’s cameramen on “Primary,” D.A. Pennebaker, was back at it, trailing the presidential campaign of a youthful Ivy League-educated Democrat who had been raised by his grandmother. Mr. Pennebaker, along with his wife and filmmaking partner, Chris Hegedus, eventually released “The War Room,” an inside account of Bill Clinton’s 1992 campaign, which earned an Academy Award nomination.

With less than three weeks until the election of the 44th president of the United States, the Hamptons International Film Festival provided political film junkies with a rare treat: personal appearances by Mr. Drew and his wife and filmmaking partner, Anne Drew, as well as Mr. Pennebaker and Ms. Hegedus, with each couple screening a new political documentary that resonates with the current election.

Saturday began with a morning screening of “A President to Remember: In the Company of John F. Kennedy,” a newly re-edited film using footage Mr. Drew’s team shot on the campaign trail and inside the Kennedy White House, when they were granted unprecedented access to the President and his advisors.

At 84, Mr. Drew is fragile and hard of hearing, but nothing prevented him from walking up to the front of the theater in East Hampton, aided by a cane and his wife, to introduce his film and to answer questions from the audience afterward.

“When we were making ‘Primary,’ nobody knew what we were doing so we didn’t meet a lot of resistance,” Mr. Drew said during a short interview after the screening.

Over a cup of coffee at Starbucks later in the day, Mr. Pennebaker, now a spirited 83, recalled that Senator Kennedy’s Democratic challenger, Hubert Humphrey, was so baffled by cameramen working without tripods he made comments about “copy writers,” indicating he thought the footage would be transcribed and used by print journalists.

Although certain aspects of the 1960 campaign seem remarkably quaint — “the whole staff fit in a hotel room,” Mr. Pennebaker said—a surprising amount of election discourse hasn’t changed in nearly half a century. There’s footage of then-Senator Kennedy privately decrying the “disproportionate importance” his religion was playing in the campaign. Harry Truman, Richard Nixon and others knock Mr. Kennedy for a lack of experience, claim that some of his comments about foreign policy will only “encourage” enemies of the U.S., and question the influence that religious advisors and other outsiders would have on a Kennedy Administration.

The idea of documenting life as it unfolded appealed to President Kennedy’s sense of history, Mr. Drew recalled. “He said, ‘What if I could see what happened in the Oval Office in the hours before FDR declared war on Japan?’” With that, the Kennedys invited Mr. Drew and his team along for the ride.

When asked about making films about political figures today, Mr. Drew responded, “I’m aggrieved because it’s not possible to do it the way I like to do it … We could capture character and spirit and feeling and tell stories in terms of feeling. And today it’s very hard to do that in politics. You can do it in other phases of life.” Journalists and filmmakers still use small, mobile cameras and synchronous sound equipment, “but they’re not generally using them the same way,” Mr. Drew said. “You see a herd of cameramen behaving like a mob. You could say they’re doing what we were doing, but the spirit of it is different.”

Mr. Pennebaker, who made a film called “Campaign Manager” in 1964 about a Republican strategist, and Ms. Hegedus believe that broad access to politicians is still possible today, even if it is much more complicated to obtain. Recently, the pair traveled with Al Franken (“God Spoke”) as he campaigned for senate in Minnesota, and even filmed with Al Sharpton for a time in 2004 while he was running for president. (A film about Mr. Sharpton was never completed, in part because other filmmakers were also trailing him.)

But being inside the White House, watching presidents make crucial decisions, as Mr. Drew and Mr. Pennebaker did with President Kennedy during the desegregation of the University of Alabama, resulting in the film “Crisis: Behind a Presidential Commitment,” would be next to impossible. “I don’t know if you’d ever get that again,” Ms. Hegedus said.

Mr. Pennebaker and Ms. Hegedus’s newest film, “Return of the War Room,” produced for the Sundance Channel, is composed of contemporary interviews with major players in the 1992 campaign, reflecting on how the Clintons’ concept of the campaign “war room” changed politics and continues to influence campaigns today.

Elections are perfect subjects for documentaries, Ms. Hegedus explained, not only because they have defined beginnings and ends, but because elections bring out the “hopes and dreams and aspirations” of highly driven people, “particularly on the presidential level. People care, and when people really care, that’s interesting to watch.”

Mr. Pennebaker said making the new film has changed his outlook on elections. “Instead of a war, it’s more like a mating dance,” he said. If candidates don’t send out the right pheromones, no matter what they say, they won’t win over the public, he explained.

The new film has also made Mr. Pennebaker rethink the limitations of cinema vérité. Interviews are anathema to the vérité filmmaker, but Mr. Pennebaker found the recollections of the likes of James Carville, George Stephanopoulos and Mary Matalin to be illuminating, and they couldn’t be captured any other way. “I’m changing my attitude toward interviews,” he said. “If you could stop a play and have the actors explain what’s happening, that can be even more interesting than watching them read their lines,” he added. During the filming process, he continued, “I felt like Herotodus suddenly discovering history.”

While Mr. Pennebaker and Ms. Hegedus aren’t on the campaign trail currently, the 2008 presidential election is being documented. Filmmakers Amy Rice and Alicia Sams have been filming with Barack Obama for the past three years and have Hollywood money behind their project. Ms. Hegedus said Ms. Rice called for advice when Senator Obama’s candidacy was gaining momentum and picking up speed and they were worried about losing their access to him.

Her advice? “It’s a process. You have to hang in there.”