The Multi-Faceted Angela LaGreca Is Getting Creative At LTV 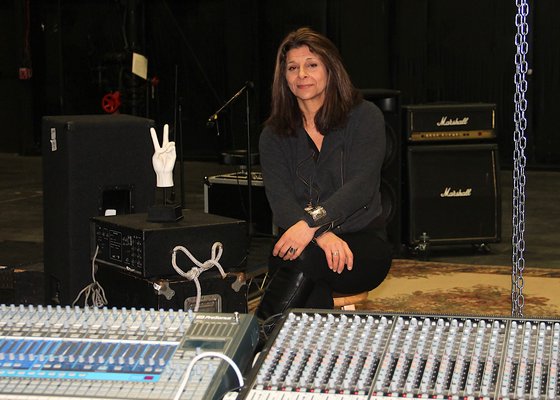 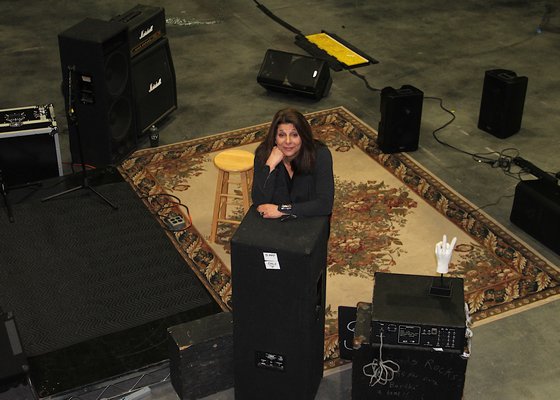 Angela LaGreca, a part-time resident of Springs since 2003, is the new creative director of LTV in East Hampton. KYRIL BROMLEY

She’s been a stand-up comedian, a television producer, and an actress on “Law & Order.”Now, Angela LaGreca, a part-time resident of Springs since 2003, is the creative director of LTV in East Hampton. Like her residency on the East End, the newly created position will be a part-time one for Ms. LaGreca, who has shared custody of Ava, her 5-year-old daughter, and multiple ongoing commitments in New York City. Among those commitments is a gig warming up the audience for ABC’s “The View,” where she was once head writer.

“I do three days here and I also work remotely,” explained Ms. LaGreca recently as she offered a tour of LTV’s studios in Wainscott.

The job may be part-time by description, but it’s obvious that Ms. LaGreca is putting full-time thought and energy into what she hopes to accomplish at LTV.

“The idea was appealing. It’s new, and it was a challenge because it’s different,” she said of the position. “It’s public access and not-for-profit. What appeals to me is telling stories, giving people a voice and an opportunity to play, educate and learn … and put a spotlight on this community.”

But in LTV, Ms. LaGreca sees a unique opportunity to combine her knowledge of the business with her love of the East End community. While Eric Glandbard came in as the new executive director of LTV in October to oversee day-to-day operations, Ms. LaGreca’s role will focus primarily on creating new content and using the full potential of LTV studios to get community residents involved in the space.

“I always said I wish I could work out here more because I love being out here,” Ms. LaGreca admitted. “I thought, ‘Can I do this?’ It sounded like something that appeals to me. I’ve worked in syndication, news, daytime and done on-camera stuff and I was a comedian, performer and singer.”

In terms of local gigs, she appeared in a show on the now defunct Plum TV and has also performed stand-up comedy at Bay Street Theater with Joy Behar and other friends. For Ms. LaGreca, putting more of her time and energy into life on the East End just seemed like a natural fit.

“I can’t explain the feeling out here for me. It’s that deep. I think I used to work the land and was either a fisherman or a farmer in my past life,” joked Ms. LaGreca, who, in fact, grew up outside New York City in Westchester County’s New Rochelle and attended Smith College in Massachusetts.

“When I came out here, I would literally be gardening, weeding and saving trees until the ticks got so much worse,” she said. “Meredith Vieira would say, ‘You were at your house this weekend, weren’t you? You’re so much happier on Mondays.’”

While Ms. LaGreca’s new job means her gardening might have to take a back seat for a while (ticks not withstanding) the viewers of LTV will be the ultimate beneficiaries. She has lots of creative new programming in the pipeline, including “Who’s Your Neighbor,” a show in which Ms. LaGreca interviews three very different people from the East End community about their lives and careers. The inaugural episode (which, like all LTV shows is also available for viewing online), features Academy Award-winning actress Mercedes Ruehl, local retail store personality and passionate baker Randall Hemming, and East Hampton native Bobby Priel, who has become an online singing and songwriting sensation known as “The Prophet.”

“You never know who’s living next door,” Ms. LaGreca said. “It doesn’t have to be this fancy high-end personality. I want to highlight an amazing firefighter who has an interesting backstory or people doing compelling things.

“Every time I’m out here, I discover something else,” she added. “I like the locals. I’ve also produced and worked with so many celebrities, I have a mixed feeling about that. I’d rather sit at a tavern and have a cheeseburger.”

While Ms. LaGreca has plenty of ideas, she admits that one of the biggest challenges at LTV is personnel. The public access station already covers hundreds of board meetings each year and offers a wide range of programming, but Ms. LaGreca feels, with help from the community, there is still much that can be tapped in terms of potential.

“We have a very small staff compared to other not-for-profits. We also have this huge physical space and want to make it like a media center so people could use it more,” Ms. LaGreca said. “We could be doing not just classes, but green screen shows and hands-on workshops for people to become documentarians.”

As a result, she adds, by enlisting local residents interested in television production, more talent would be available to create unique programming or cover events taking place throughout the community.

“Anyone who wants to do a show can do a show here,” Ms. LaGreca said. “Sometimes, they take a class to learn and are intimated or don’t follow through. I Googled ‘public access’ and some shows are zany or political. I love the idea of ‘the sky’s the limit,’ and I think we can be covering more.”

Ms. LaGreca points to “East End Underground” as a good example of the type of programming that is possible. Created under the tenure of LTV’s previous executive director Morgan Vaughan, who stepped down last fall, the show is a four-camera shoot featuring local bands performing in a concert-like setting at the studio.

“We have a budget, but we’re looking for an underwriter for that so that we can expand and do more,” Ms. LaGreca said. “We could get more cameras to lend out, bring on a couple producers and editors to do things. I want to try to get some more comfortable furniture for the set instead of just having two hard chairs.

“You don’t have to have a million bells and whistles to have compelling TV. But I have a background in this, and there’s no reason you can’t have great TV,” Ms. LaGreca said.

Another issue facing LTV is the fact that its programming has historically not been available beyond the borders of East Hampton Town, which is something Ms. LaGreca is optimistic will change.

“From what I understand, there have been a lot of discussions about getting LTV in Southampton and I’m hoping that happens,” she said.

In the meantime, all of LTV’s content is available for free on its website. Ms. LaGreca notes that other new LTV programs in the works include “The She Shed Sessions” in which Annie Baller, a co-owner of Hamptons Farmstead, and Anne Chaisson, the executive director of the Hamptons International Film Festival, travel around the East End in an Airstream trailer interviewing people. Also coming up is “Show Me Your Skillet,” a Hamptons restaurant and home chef cooking show, “In The Artist’s Studio,” a series currently in development with the East Hampton Arts Council, and “Access Hamptons,” an art, society and lifestyle magazine show.

On Friday, February 22, from 7 to 9 p.m., Ms. LaGreca will kick off the first in a series of live events called the “Creative Artist Salon Series at LTV.” The concept is to provide an intimate performance space for actors, musicians, comedians, filmmakers and visual artists to exhibit their work, meet up with one another and share ideas.

“I used to do these in my house. It’s like the art salons in Paris back in the day when Gertrude Stein would host events for writers and artists,” said Ms. LaGreca, who expects the series to become a monthly gathering for the creative minds of the East End.

“I see LTV as a great way to connect people,” she added. “It’s not just a station … it’s a media center.”

To learn more about LTV and its programming, visit ltveh.org.