Phyllis Shapiro and Marty Markowitz at their Southampton home with their dog, Rusty. 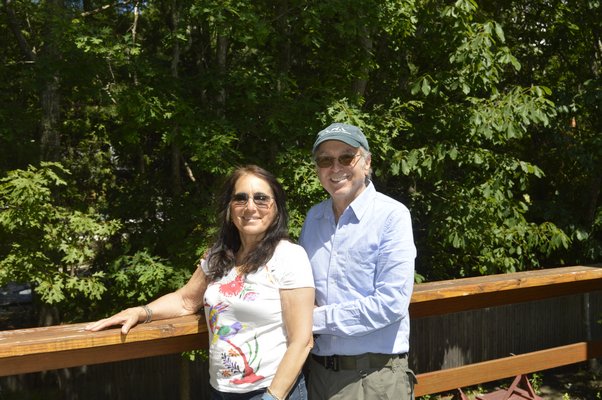 Phyllis Shapiro and Marty Markowitz at their Southampton home.

Southampton's Marty Markowitz with a letter from the New York State Department of Health regarding his complaint against his psychiatrist. 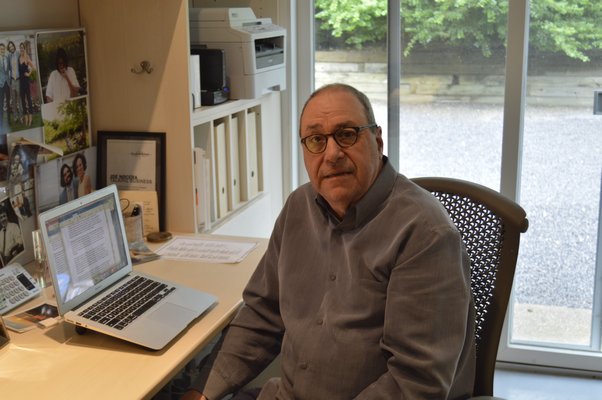 Joe Nocera, journalist and creator of the podcast "The Shrink Next Door."

Joe Nocera, journalist and creator of the podcast "The Shrink Next Door."

When seasoned journalist Joe Nocera and his wife, Dawn, bought a house in Southampton in 2010, they thought their next-door neighbor was a well-known New York City psychiatrist.

His family name was allegedly on the front door welcome mat, and a pseudonym he went by was listed on the mailbox and in the phone book. But the following summer, Dr. Isaac “Ike” Herschkopf was gone.

“There are a couple things that happened that sparked my journalistic curiosity,” Mr. Nocera said in a recent phone interview. He found out that the house actually belonged to the doctor’s long-time patient, Marty Markowitz. And Mr. Markowitz, at the advice of his psychiatrist, hadn’t seen his sister, Phyllis Shapiro, for 27 years.

Mr. Markowitz, now 77, and Dr. Herschkopf’s relationship began in 1981 and is chronicled in “The Shrink Next Door,” a seven-episode podcast from Bloomberg and Wondery, and written by Mr. Nocera, an established business journalist who has worked for The New York Times, authored several books and was the editorial director of Fortune. The series has remained one of the top 10 shows on iTunes since it premiered on May 21.

The thousands of documents, photos and trinkets that Mr. Markowitz keeps in his basement serve as evidence of his relationship with his psychiatrist, and the podcast illuminates just how far the doctor went to exert control over his life. In the years following 1981 and until 2010, Dr. Herschkopf effectively took over Mr. Markowitz’s Southampton home, served as president of his textile company, became a cosigner of his million-dollar Swiss bank account, advised his patient to write a new will, which left the house to the doctor’s wife, Becky, and became his power of attorney, giving him complete control over his patient’s affairs. They also created a charitable organization together, called the Yaron Foundation, to which Dr. Herschkopf convinced his patient to leave his wealth.

“I had nobody,” Mr. Markowitz—a Wharton business school and New York University law graduate—said during an interview at his home on a sunny June afternoon, as he sifted through various remnants of his relationship with Dr. Herschkopf. The many trinkets, published letters to the editor and images with celebrities had all once covered the walls of the house, with little white space to be seen. “There was nobody, certainly, in my family that could slap me across the face and say, ‘What are you doing, are you out of your mind?’”

Dr. Herschkopf did not respond to requests for comment, but through letters discussed on “The Shrink Next Door,” he maintained that his medical relationship with Mr. Markowitz ended around 1983 and that he served as a business consultant in the years after.

When Mr. Markowitz began therapy with Dr. Herschkopf in 1981, he was in a vulnerable place. Both of his parents had recently died within six months of each other, he was having relationship troubles, and he was struggling with his uncle for control of Associated Fabrics Corporation, his family’s textile company. His rabbi recommended that he see Dr. Herschkopf, who he called, Mr. Markowitz recalled, a “nice, young psychiatrist.”

They saw each other three times a week for three hours a day. Soon into their relationship, Mr. Markowitz said his doctor told him he wasn’t “lovable” and that others were waiting to take advantage of him, including his sister. Episode three of the podcast is titled “Easy Mark Markowitz,” referencing the psychiatrist’s nickname for his patient.

Just a few years into their relationship, Dr. Herschkopf was the only person left in Mr. Markowitz’s life. “Looking back on it all, it seemed like I was in a cult,” Mr. Markowitz said. “What does every good cult leader do? The first thing they do is separate you from your family.”

“It’s their job to reconstruct yourself into a whole human being, not demean you,” said Ms. Shapiro, Mr. Markowitz’s sister, of psychiatrists and the role they should play in their patients’ lives. “They try to get your life together, they try to build you up, whatever deficiencies or faults you think you have.”

The doctor hosted three parties a summer at Mr. Markowitz’s Southampton home that were attended by celebrities, Manhattan’s elite, medical coworkers, and his patients. In one image used in “The Shrink Next Door,” Dr. Herschkopf is wearing a blue Speedo bathing suit. He’s pictured with three women, all of whom, according to Bloomberg, were his patients. Their faces are blurred out in the image, but their arms are wrapped around him and one of them is holding the doctor’s hand.

Most people at those parties believed Mr. Markowitz to be the caretaker or gardener of the home, including Mr. Nocera. On the podcast, the journalist described Mr. Markowitz as the “maintenance man,” usually dressed in green and often occupied with caring for the property’s grounds.

“I hated those parties because they consumed me,” Mr. Markowitz told me, explaining that he was always busy during them. He made the drinks, served the food and cleaned up after guests. Apparently, Dr. Herschkopf didn’t want to hire outside help because, Mr. Markowitz said, he believed it would “change the character of the party” and guests would “watch what they’re saying.”

Around 2008, the tables began to turn. Mr. Markowitz saw Dr. Herschkopf less and less, especially since Mr. Markowitz had moved his company from Manhattan to New Jersey because the rent was more affordable. When he decided that he wanted a flat screen television in his new office, Dr. Herschkopf, for some reason, wasn’t on board. “He became very annoying,” Mr. Markowitz recalled. “He wouldn’t let it go, and it started to really get to me.”

“In addition to that, I’m running the company and getting my mojo back—I have the entrepreneurial gene that I inherited from my father and grandfather. So what do I need this guy for?” he said he realized at the time.

When Mr. Markowitz had a hernia operation in 2010, the doctor never called to check in on his recovery. Using what he learned from Dr. Herschkopf himself—never to “burn bridges” with someone over the phone or in person—Mr. Markowitz said he wrote his doctor a letter breaking off their current arrangement. At that point, he had spent nearly $3 million on Dr. Herschkopf, he said.

“I’m paying him and doing a staggering amount of work, which is why I didn’t give it back,” Mr. Markowitz said, looking around his basement at the many remaining photos of Dr. Herschkopf with celebrities, published letters to the editor and more amassed over the years, and referring to several unpublished books that he had also typed up for his psychiatrist.

Much of the details of Mr. Markowitz’s Southampton property are actually products of his relationship with Dr. Herschkopf. There are two koi fishponds—now with about seven large koi that are at least 25 years old—as well as a tennis court, a basketball court and an 18-hole miniature golf course. But Mr. Markowitz looks fondly around his land now, seemingly taking it all in. His sister and rescue dog, Rusty, are close by. He appears to be almost disconnected from the decades-long experience he had with his psychiatrist.

“Now, it’s peaceful,” he told me over the sounds of the nearby stream that feeds the koi ponds.

His eyes landed on his newest venture: an apiary where thousands of bees were busy buzzing away, making honey. “The more I study honeybees, the more impressed I am,” said Mr. Markowitz who’s even joined the Long Island Beekeepers Association, and soon, will raise chickens too.

“I want to be known as Farmer Marty, what can I tell you,” he joked.

Throughout his process of writing “The Shrink Next Door,” Mr. Nocera described Mr. Markowitz as “dispassionate.”

“I think that’s because of the distance of time,” he said. “Enough time had intervened, and a lot of the initial anger had gone away.”

Mr. Nocera first decided to write this story about seven years ago, when he was still working at the New York Times. It never went to print, and he left the manuscript in his bottom drawer for several years. “Every once in a while I’d tell people the story in my backyard and they’d say, ‘Oh my God,’” he said. “I felt like that was the only publication it was going to get.”

But Mr. Nocera’s son, Nick, told him to listen to “Dirty John,” a true crime podcast that covers similar themes of power, control and manipulation—and advised him to tell his story in the same way. A business journalist by trade, he had never delved into the world of podcasts before and admits he didn’t know much about them at all.

“What I did in the magazine world is nothing compared to what they do in the podcast world,” Mr. Nocera said. “They’re just really obsessed with keeping the listener entertained and interested and informed like every line, every beat.”

And that’s just what “The Shrink Next Door” does. Aside from Mr. Markowitz, other patients also speak out on the podcast, though they are not identified by their real names. One of them, “Judith,” alleged that Dr. Herschkopf convinced her not to attend her mother’s funeral. Another patient, called “Emily,” amended her will to leave her fortune to Dr. Herschkopf’s family too.

Mr. Nocera believes that “The Shrink Next Door” has been such a success because of how frequently people seek help for their mental health problems. The National Institute of Mental Health reported that in 2017, 18.9 percent of all U.S. adults suffered from a mental, behavioral or emotional disorder, and 42.6 percent of them received treatment in the past year. “The Shrink Next Door” includes the points of views of different medical professionals on the ethics of psychiatry, many of whom, Mr. Nocera reported, say, “most interactions outside the four walls of the doctor’s office can raise flags.”

Mr. Nocera also said that other patients have come forward since “The Shrink Next Door” premiered, but he would not elaborate further. Dr. Herschkopf has since resigned from his voluntary teaching position at NYU Langone Health, a spokeswoman wrote in an email, and after years of no movement, the New York State Department of Health has assigned a new investigator to Mr. Markowitz’s case. The doctor also resigned from the board of directors of the Fellowships at Auschwitz for the Study of Professional Ethics, or FASPE.

“The only suitable ending really is for the medical board to take his license—we don’t want him to do this to anybody else.”