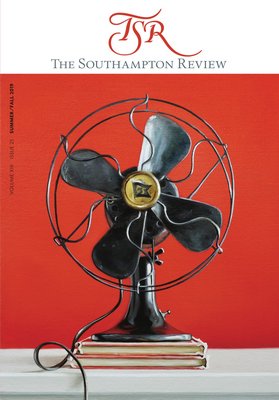 Cover of The Southampton Review: Summer/Fall 2019.

The Summer/Fall 2019 issue of The Southampton Review is here! The Southampton Review (TSR) publishes its 25th issue on July 13 and inside readers will find an updated look and work by authors such as Rick Moody (Hotels of North America"), Lisa Locascio ("Open Me"), Aliki Barnstone (Poet Laureate of Missouri), Katherine Faw ("Ultraluminous"), Scott Cheshire ("High as the Horses’ Bridles"), and Rachel Lyon ("Self-Portrait with Boy").

The cover of this issue of TSR features "Primary Fan—Red,"a painting by Christopher Stott who is represented by the George Billis Gallery in New York City. Mr. Stott’s work will be shown at this year’s Market Art + Design running July 5 to 7 in Bridgehampton. Emily Smith Gilbert, TSR’s editor-in-chief, says, “I just knew the painting was going to be the cover. Christopher gives the fan a personality, somehow. The clean lines complement the journal’s new design.”

Among the poetry in this edition is Alicia Mountain’s “The Owl in the Forest in My Mouth.” In June, Ms. Mountain (first published in TSR in 2015) moved from Colorado to the East End to work at Quail Hill Farm in Amagansett.

“When I found out Alicia would be in the area I was so excited—it feels like an extension of the community of authors and artists we’re building with TSR,” Ms. Gilbert says.

The winning essays of the fourth Frank McCourt Memoir Prize contest are also published in this issue. Isabel Seabeck placed first for “Baab,” which Ms. Gilbert describes as “a fever dream of being an outsider in a place that is strangely familiar.” Journalist Massoud Hayoun took second place with “Urumqi mon amour,” an essay about searching for a Uyghur ex-boyfriend in Xianjing province. Mr. Hayoun’s debut memoir, "When We Were Arabs: A Jewish Family’s Forgotten History," will be published June 25 by The New Press.

The Southampton Review (TSR) is the literary journal of the MFA Program in Creative Writing & Literature at Stony Brook Southampton. TSR was founded in 2007 by Lou Ann Walker. The goal is to create a literary journal filled with debut, emerging, and established authors, a literary journal that is inclusive of marginalized voices, and one in which readers will find themselves represented.