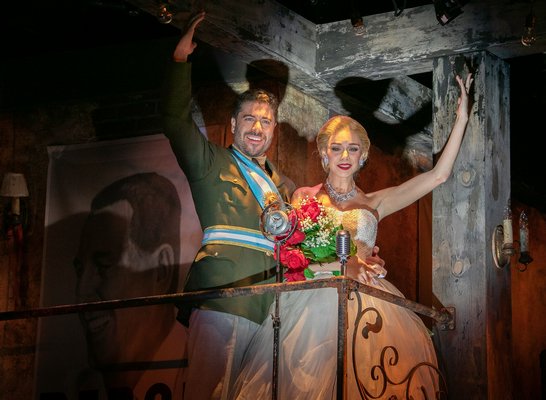 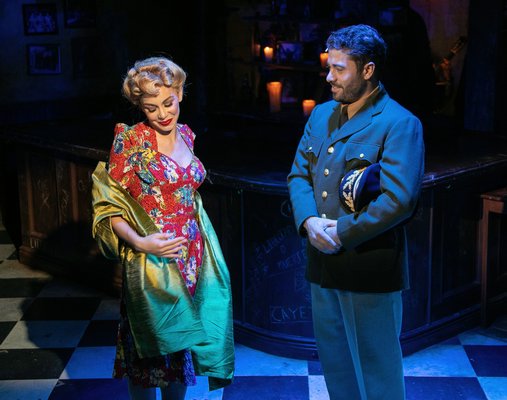 Both my husband and I remember being underwhelmed when we saw “Evita” on Broadway in the original Hal Prince production with the star power of Patti LuPone and Mandy Patinkin. “For this we paid for front row balcony?” we asked each other quizzically.

We had good seats again last night at Bay Street Theater, but my lord, the show had so much fizz and spritz in this “Evita” it was as if director Will Pomerantz opened a magnum of Dom Pérignon and an effulgence of exuberance popped out and sprinkled on every seat in the house. It’s that fabulous.

Was it the singing, the dancing, the tango-infused choreography by the talented Marcos Santana? All incredibly polished, with electric excitement ricocheting off the walls.

Was it their own brand of hot sauce passion that the all-Latin cast (save East Hampton’s talented 11-year-old Dakota Quackenbush) added to this thoroughly Latin story about one of the most celebrated—or infamous, depending on your bent—ladies from Latin America?

Was it the stunning single set of a seedy tango bar (by Anna Louizos) that served so well? The chainsaw-quick costume changes for the heroine herself, sometimes right there on stage? (Lindsay W. Davis’s costuming was spectacular.)

Was it the swell live music slightly off to the side by a six-piece ensemble under the dynamic direction of Camille Johnson, also on keyboard?

But before I end up feeling like I’m selling cookware in an infomercial—But wait, there’s more!—let’s get to the stars: Adrianna Rosario as Evita herself projects star power the minute she makes her entrance in a cloth coat and brunette wig (the real character’s natural color), and when she opens her vocal chords to belt out one of her several arias in this modern opera, she leaves no question she is a force that attention will be paid to.

While the role has sometimes been performed portraying Evita as merely a conniver with ice in her veins, Ms. Rosario colors her character’s canniness with warmth and humanity, and thus we can be sad when cancer kills her at 36, and honestly, that may have been the difference that failed to light our fire when we saw it in 1981. The lyrics at times call Evita a bitch and a slut who only slept her way to the top without heart, but really is that what you want your heroine to be? Give us someone to at least empathize with no matter what. Ms. Rosario responds in kind with her multi-layered performance.

Che Guevara (Trent Saunders) wanders about the stage throughout the entire show. Though born in Argentina, in reality Che has no place in this story—he was busy elsewhere—but his insertion here is how the tale is mostly told. He is a knowing Latin chorus, a sly and skeptical commentator on Evita; the populous, rich and poor; the generals surrounding Perón, et cetera. Mr. Saunders gives a commanding physical performance (a certain amount of body slams to the floor are involved) and speaks and sings Tim Rice’s complicated lyrics with pitch-perfect bemusement over the proceedings.

Omar Lopez-Cepero’s rich baritone fills out the trio of leads as Juan Perón, first the Secretary of Labor whose popularity with the masses—enormously lifted by his connection to a woman of their class—catapults him into the role of presidente. His on-stage chemistry with Ms. Rosario is real: They are to marry in November.

Kyle Barisich is Magaldi, a deliciously seedy lounge singer—you smile the minute he steps on stage—who seduces 15-year-old Eva during “On This Night of a Thousand Stars.” Or is it the other way around in this telling? Whatever. Eva (in time the masses will call lovingly her Evita) packs up and goes to Buenos Aires with him to lift herself out of poverty.

It would be criminal not to mention the Gabi Campo’s short solo as the schoolgirl mistress of Perón whom Eva makes short work of. Ms. Campo’s despondent rendering of “Another Suitcase in the Hall” with that period-piece of Samsonite gave me damp eyes by the time she finished. It’s no wonder that Ms. Campo is heading to Broadway in the fall.

But then, nearly half the cast has Broadway credits or close, so what do you expect? Even in the ensemble, Julian Alvarez’s tall, lanky body and gleeful emoting catches your eye.

Now to the story. Two versions of Evita the woman exist in the public mind, and that is made plain with lyrics such as this in “Peron’s Latest Flame”: “Her only good parts are between her thighs, she should stare at the ceiling not reach for the skies.” But elsewhere Evita points out “I am a worker, I’ve suffered the way that you do.” She is indeed, both at once, but where is a musical about a man who’s slept around and criticized for it? Maybe that is yet to come.

Lyricist Tim Rice had the idea for this musical and based it on dirt-digging biography, “Evita: The Woman with the Whip,” influenced by the anti-Peronista faction. Indeed, she was born on the wrong side of legitimacy, but her father, a well-off rancher, did allow her and her brother officially to take his name, Duarte, even after he returned to his first and legal family and left Eva’s family destitute in a rural village.

A more-balanced biography states Eva went to Buenos Aires with her mother, putting a whole different spin on her story. Yet it is the more colorful and tawdrier version that mercilessly infuses the Tim Rice/Andrew Lloyd Webber collaboration that is “Evita.” Despite lukewarm reviews and the lack of a melody beyond a few bars that lingers in the mind, “Evita” was a big hit when it first premiered, both in London and New York, where it won six Tonys, including Outstanding Musical and Outstanding Actress.

It’s a given that any model/actress in the ’30s and ’40s had to deal with lusty and numerous Latin Weinsteins, but however it happened, by the time she meets Perón, Argentina’s popular secretary of labor, at a rally after an earthquake in 1944, she is a sophisticated, striking blonde with an elaborate updo, befitting the highest paid actress in the nation. She is 24 (or 27); he is 48, a widower, and immediately smitten. A few months later, it was announced that all broadcast actors must organize into a union; they did, and with foresight, they elected Perón’s mistress the union president. They married the next year.

The musical follows their rise, her appeal to the teeming masses from which she came—she often addressed them in their own parlance, often reached out to the poor and touched them, gave money to the poor through a charity she organized, and argued to give women the vote. All this made her more popular than Perón to many. But where did all that money come from? A hidden Swiss bank account, favored by so many dictators?

The play makes no distinction, but others say there was never such a secret stash, it was all done openly as she attired in Dior adorned with jewels by Cartier. As Perón’s power began to waver, she was struck with cancer, and in 1952, died a painful death. The play begins on the 10th anniversary of her death, and after a moving funeral by those who adore her moves backward in time.

Comparing the story of the real Evita—a sinner and saint in real life and on stage with somewhat different undertones—knowing more of her true story made me appreciate even more the humane, sassy but tender portrayal of Ms. Rosario as Evita.

This is one helluva show, not to be missed. Due to high demand, it’s already been extended a week, and will run until September 2.