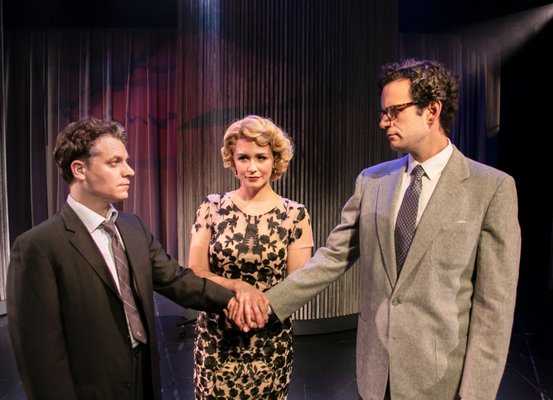 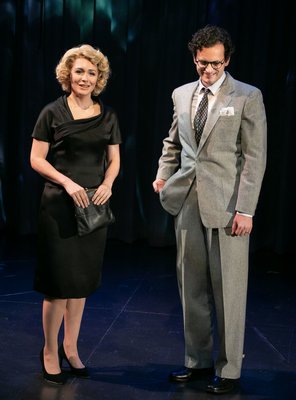 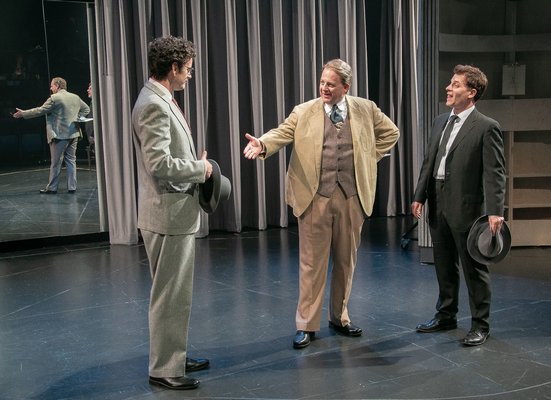 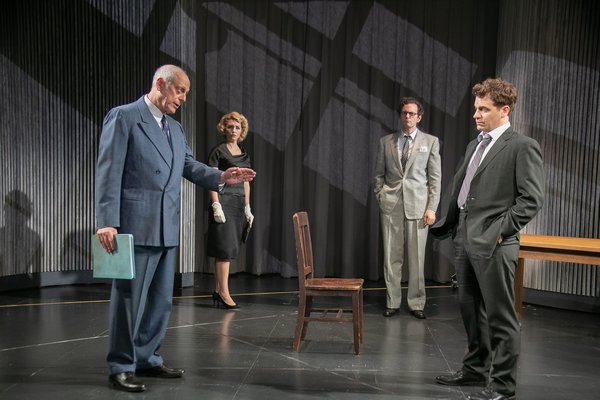 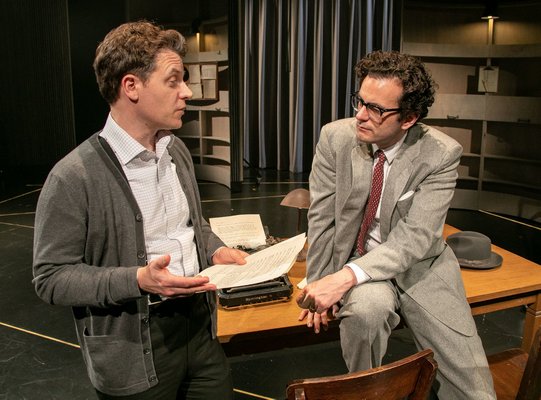 Big themes of honor and betrayal, hubris and humiliation are necessary ingredients for great drama. Bay Street Theater’s world premiere of “Fellow Travelers” has all that. Mix in recent history about people whose names are familiar, fill those roles with superb actors, and the result is a riveting evening of theater that is truly memorable.

“Fellow Travelers” tells the story of the intertwined lives of the revered playwright Arthur Miller, the famous (or infamous) director Elia Kazan and the woman who, in her own way, loved them both and married one, Marilyn Monroe, and how the Red Menace of the 1950s affected them. More specifically, the play deals with the personal and professional friendship of the two men, and what happened after Kazan testified before the House Un-American Activities Committee,. or HUAC.

The sharp and often witty writing of playwright Jack Canfora starts as soon as the lights dim and continues on through with award-worthy acting and dynamic staging with a spare, smart set. Director Michael Wilson—whose credits are long and include Bay Street’s 2015 production of “Grey Gardens”—brought all the elements together to give us one dazzling evening of theater about a sorry period in our not-so-long-ago history.

Thousands of people—especially in government, academia and the arts—were grilled, defamed and shamed by HUAC. Any brush with the Communist Party, no matter when, no matter how, was enough to imply guilt by association. Communist sympathizers ready to overthrow our government seemed to be hiding in every broom closet in America.

Due to its impact on American culture, the motion picture industry came under intense scrutiny. With their eye on the bottom line and seemingly without blinking, studio heads caved to government enforcers. If you were named as a Red sympathizer by someone testifying, no matter how talented, you were blacklisted and unable to find work. Even if your name was simply mentioned in passing, your phone might stop ringing.

It was not enough to disavow one’s past association with the Communist Party; one had to name the others who attended meetings with you. That was the red line in the sand. Cross it and you could continue working in the medium you loved; refuse to name names and you would be blacklisted. Televised and front-page news across the country, the hearings turned into rites of humiliation.

When the play opens, Miller (Wayne Alan Wilcox) and Kazan (Vince Nappo) are on their way to Hollywood. Kazan, familiarly called Gadg by friends, had already directed Miller’s “Death of a Salesman.” They are looking to make a film about corruption on the docks. Miller already has the bones of a screenplay.

Once in Hollywood, Kazan meets Monroe (Rachel Spencer Hewitt), and in short order, he arranges for her to meet Miller. The chemistry between the New York intellectual and the vulnerable, voluptuous Marilyn is immediate.

Enter studio head Harry Cohn (a rousing Mark Blum) and the thought police in the form of someone (Jeffrey Bean) there to scour scripts free of any whiff of left-leaning ideology. The scenes are deftly staged (by Jeff Cowie) with scant props (Andrew Diaz) and skillful lighting changes, (Ken Billington). The real tension begins when Kazan is subpoenaed to testify before HUAC.

He had been a member of the Communist Party briefly, and directed socially conscious plays, including those of Clifford Odets and Miller. Though Kazan had quit the party 17 years earlier, his growing success and fame made him a desirable target. HUAC wanted a star pinned on their chests.

For Kazan, who found his real métier in moviemaking rather than the stage, the question was: Would he cave and name names, and thus be allowed to continue his career, or would he refuse and accept being blacklisted, unable to make movies? Would he sacrifice honor for his art? Therein lies the heart of the drama, for both choices are fraught.

Discussing the choice with Miller, his pal offers no way out: “I think you’re the best director in the world. I think if you weren’t allowed to make movies it … would be criminal.” Yet Miller also sounds a warning shot, adding that when the witch hunt is over, Kazan may regret his decision.

I am giving nothing away here because most theatergoers over a certain age—most of the audience—know that Kazan, among others, did name names, and continued to make movies, some of them great.

Yet after Kazan did the deed, a decade would pass before the two men would speak.

Miller’s situation was quite different. By the time he is called to testify, it is 1956 and the influence of HUAC is waning. He refuses to give the committee the answers it wants, and while sentenced to jail, he never serves a day. Even if he had, his plays likely would have found a stage somewhere. New York was not Hollywood.

Miller’s moral stance, though it seemed to amplify his standing as an ethical arbiter of American culture, cannot truly be compared to that of a movie director who needs lights, camera, action—money, that is—to work in his chosen craft.

Mr. Canfora says that he has taken artistic license with the facts, yet the outlines of his powerful drama are true to what actually happened, making it all the more poignant if you know the history. This stuff happened in the lifetimes of most of the people in the audience.

Though younger theatergoers might not be as aware of the history, Mr. Canfora’s brilliant script immediately and intimately transmits the paranoia of the times. Though today we hear of Russian interference in social media and our elections, as well as the fierce loyalty demanded of those in the Trump administration, the parallels are obtuse rather than direct. Large swaths of the public today do not live in fear of being handed a subpoena.

While Monroe is not central to the moral issue at stake here, she is an integral part of the two men’s lives. She had a long affair and friendship with Kazan, and she fell in love with Miller even though he was married. The tabloids gorged on her short marriage to Joe DiMaggio, her surprising liaison with Miller, his “quickie” divorce, and finally, their five-year marriage.

Today Monroe is an iconic touchstone of the era. We know her all-too-human story, her emotional wounds, her breathy voice, her luscious body. Ms. Hewitt in a blonde wig does a boffo job of portraying that Marilyn with warm earthiness, touching grace and surprising self-awareness.

Though some might cavil that her part is underwritten, she was not faced with the moral question of betrayal for art. Nor is she the Greek chorus here, for she does not comment on the action but rather lives in it. Her relationships with Kazan and Miller demonstrate how acts of great consequence do not occur singularly alone. Life has many compartments that co-exist.

Indeed, Marilyn is necessary here, for she is the force who brought the former friends together in 1963, though they would never be great pals again. Nor would Kazan be truly forgiven by many, for he never said he was sorry, and in fact, defended his choice to the end of his life. When awarded an honorary Oscar nearly a half century later, picketers stood outside and many inside notably refused to stand, or even applaud.

Mr. Wilcox as Miller and Mr. Nappo as Kazan both bear an uncanny resemblance to their real-life counterparts. Mr. Wilcox is tall and thin, his flat delivery echoing that of his real-life character, rational and unyielding. Mr. Nappo gives us a sparkplug of an excitable Greek (as Kazan was), contained at times, but ready to go off on a line. Mr. Blum’s version of Harry Cohn is just as bloated, aggressive and blunt as anyone’s imagination of a studio head, and quite simply, he is wonderful. Jeffrey Bean fills three different parts with assurance, and especially shines as the government guy Roy Brewer, whom you love to despise.

If off-Broadway isn’t the next stop for this electric and stirring drama, it’ll be a crime.

“Fellow Travelers” continues through June 17 at the Bay Street Theater and Sag Harbor Center for the Arts. For showtimes and tickets, call 631-725-9500 or visit baystreet.org.