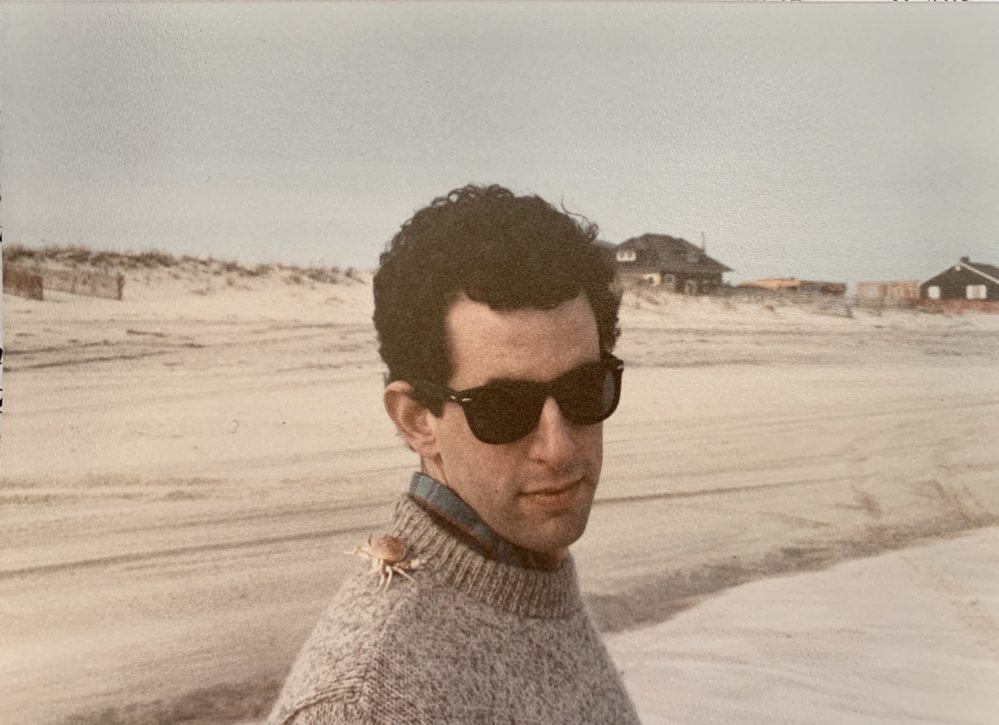 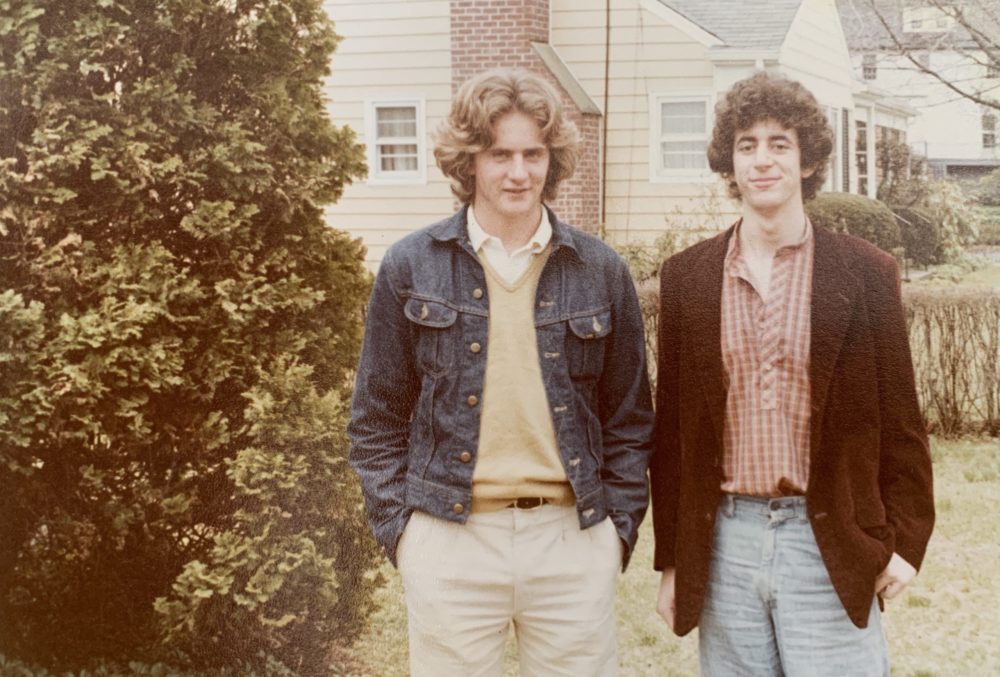 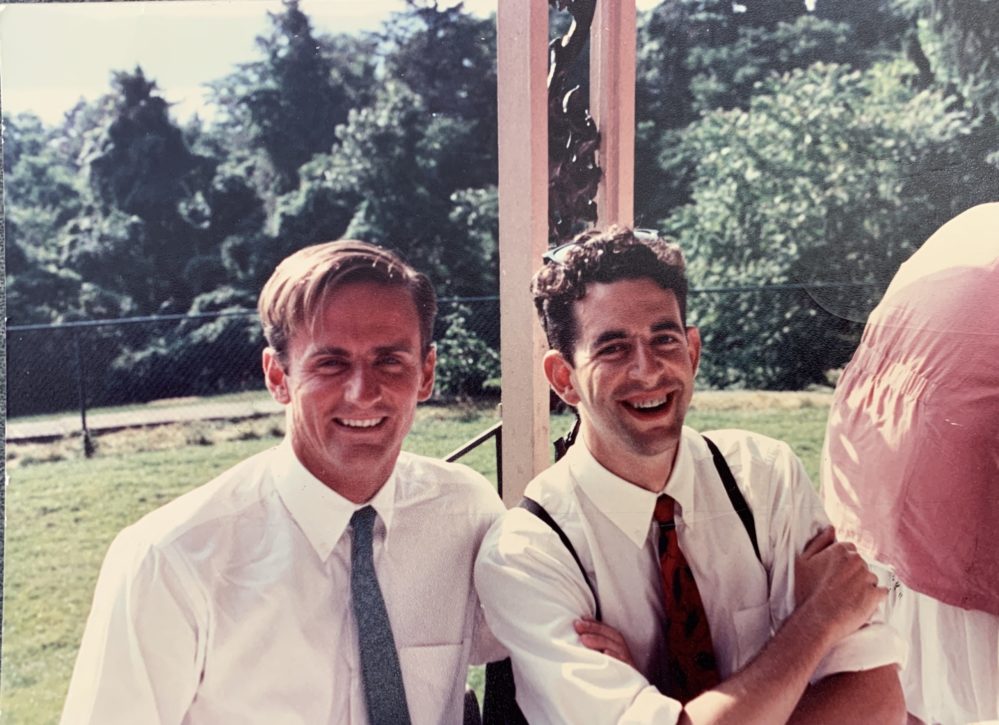 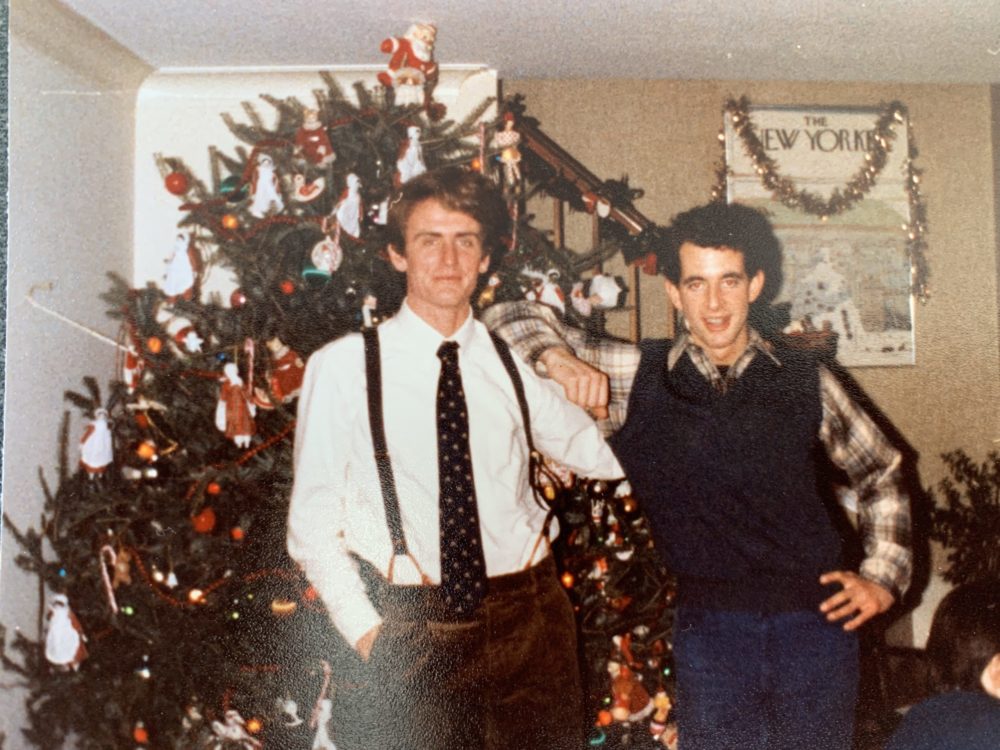 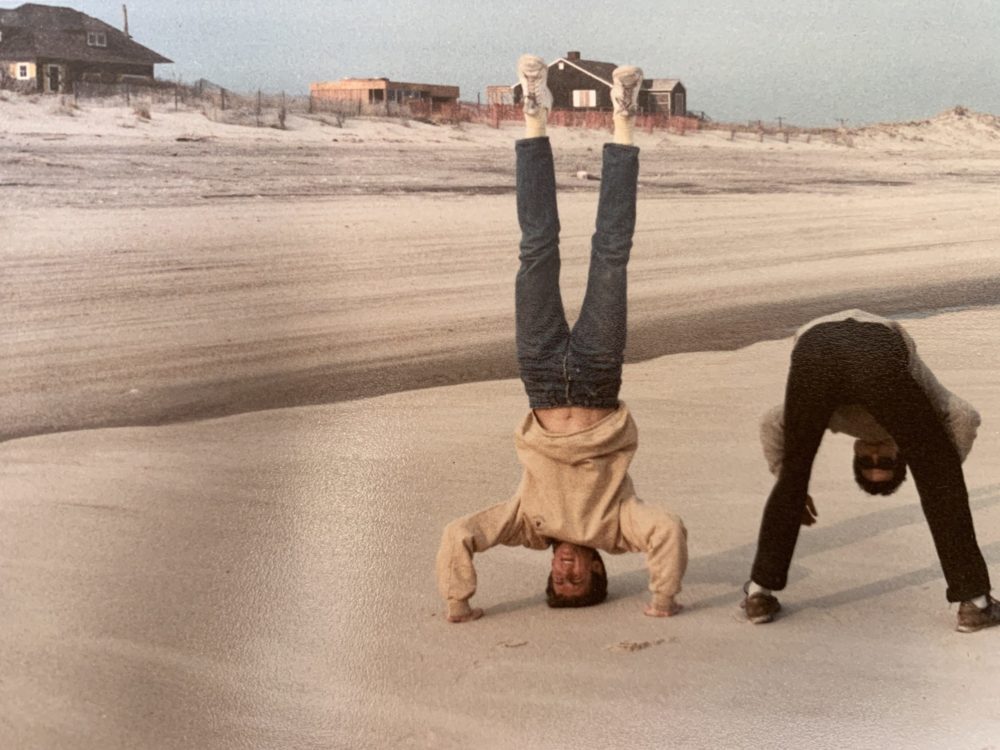 Matthew O'Grady and Jonathan Larson on the beach. 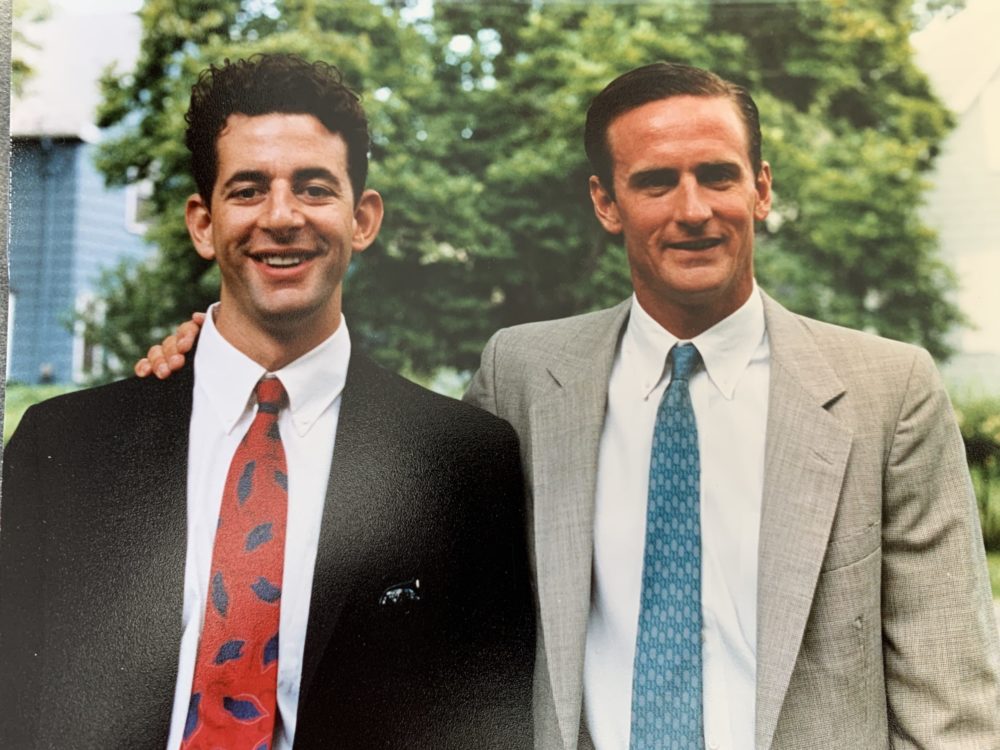 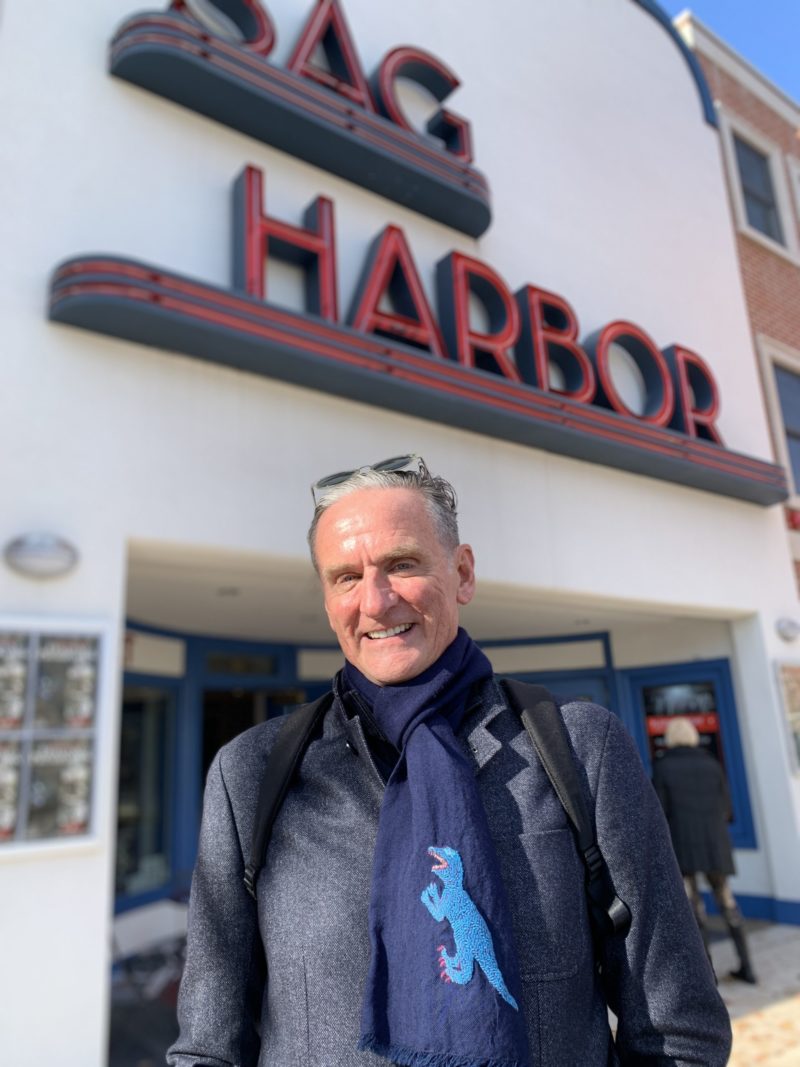 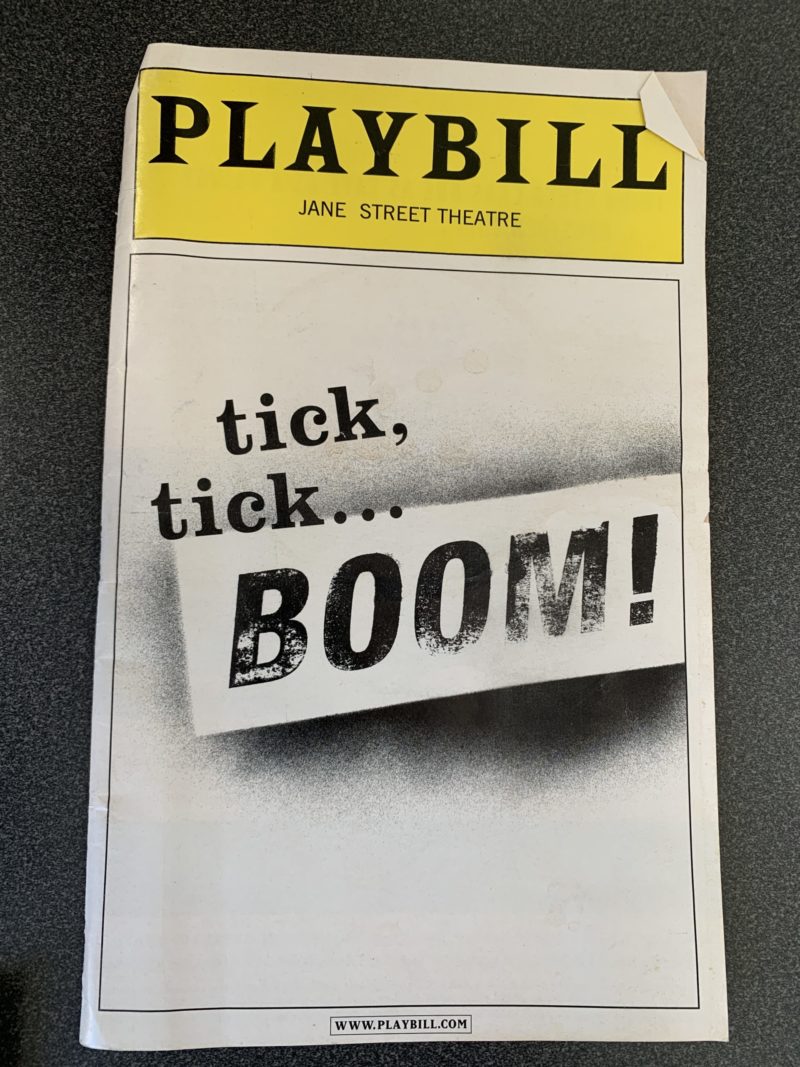 The program for "Tick, Tick Boom!" at the Jane Street Theatre. The show was directed by Scott Schwartz. 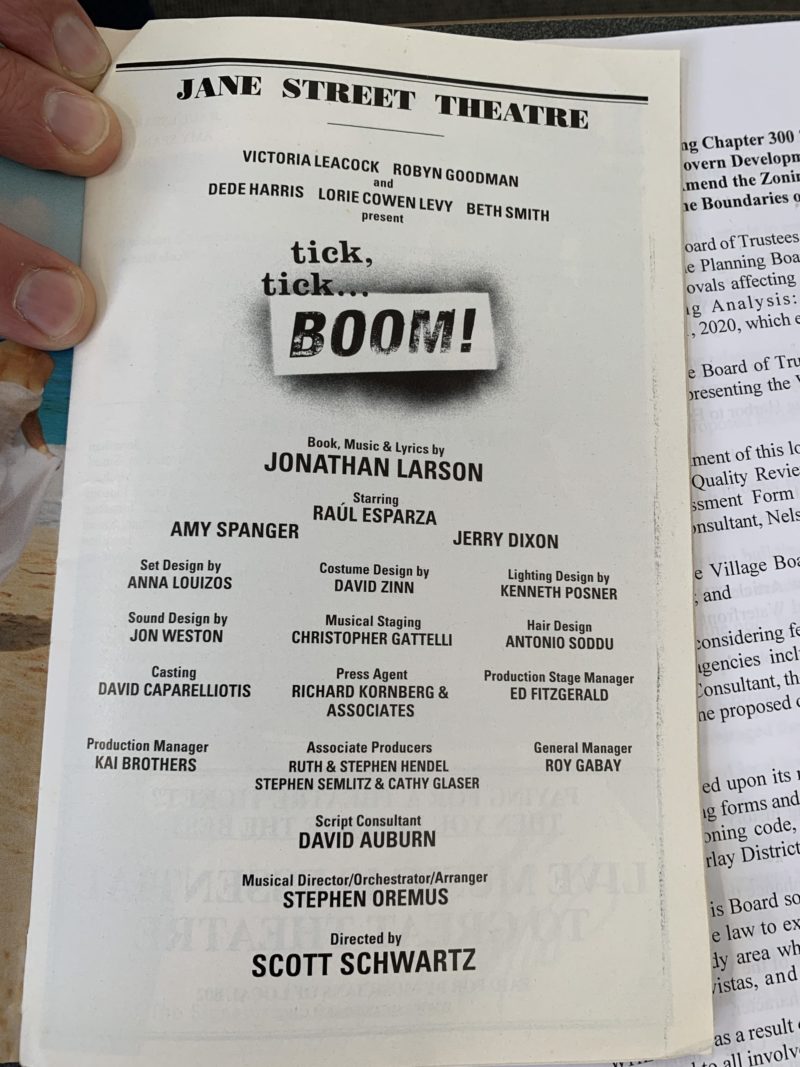 The program for the 2002 production of "Tick, Tick Boom!" at the Jane Street Theatre. The show was directed by Scott Schwartz.

On the first Monday in November, a small group of friends gathered in Sag Harbor’s Oakland Cemetery just as the last glimmer of sunlight was fading and true dusk was setting in. They brought with them candles, food and beverages for an impromptu celebration of the Mexican holiday of Día de los Muertos, also known as the Day of the Dead.

As the friends raised a collective toast to the memory of those buried in the cemetery, they also paid tribute to departed friends and family who, though their final resting places are far from Sag Harbor, nonetheless remain close to the heart.

Among those honored was Jonathan Larson, the composer, playwright and creator of the hit Broadway musical “Rent,” who died in his Manhattan apartment on the morning of January 25, 1996. It was the day of “Rent’s” first Off-Broadway preview and just a week before his 36th birthday. Later, it was determined that Larson had suffered an aortic aneurysm caused by undiagnosed Marfan syndrome. Despite visiting two different Manhattan ER rooms complaining of chest pains in the days before his death, Larson was told he had food poisoning and sent home.

It turns out that the impromptu cemetery tribute to Larson wasn’t entirely random. Among the people there that evening was longtime Sag Harbor resident Matthew O’Grady, who also happened to be Larson’s best friend.

“We grew up in White Plains, New York and graduated in 1978 from White Plains High School. I knew him from third grade on,” O’Grady recalled in a recent interview. “He was my closest friend all through elementary school, junior high, high school, and college. Neither of us had a brother, so he was the closest thing.”

In fact, the two were so close that Larson modeled Angel, the HIV-positive drag queen in “Rent,” on O’Grady.

“Being downtown doing drag was such a big thing then. It was so easy to do and fun, especially at Christmastime. There were so many drag clubs to go out to. Plus, I was really skinny and fit into everything,” laughed O’Grady, who, like Angel, is also HIV-positive.

But unlike the character in “Rent” who dies of AIDS, O’Grady is a survivor.

O’Grady also served as the inspiration for another character in a Larson musical — Michael, in “Tick, Tick… Boom!” This purely autobiographical play is about Larson’s fears of turning 30 without having found success in the theater and his eight-year struggle to write “Superbia,” his futuristic musical which was never fully produced. First performed Off-Off-Broadway in 1990 by Larson as a one-man show (titled “Boho Days” and dedicated to O’Grady) he renamed it “Tick, Tick… Boom!” and more productions followed. After Larson’s death, it was revised by playwright David Auburn for three actors, and in 2001, ran at the Jane Street Theatre (where it was coincidentally directed by Scott Schwartz, the current artistic director of Sag Harbor’s Bay Street Theater).

Now, “Tick, Tick… Boom!” has been released as a film. It stars Andrew Garfield as Larson and is directed by Lin-Manuel Miranda, the visionary behind that other legendary Broadway musical, “Hamilton.” The film is currently in theaters and on Netflix. On Thursday, December 2, Sag Harbor Cinema will screen “Tick, Tick… Boom!” with O’Grady on hand to talk about his friendship with Larson. Also appearing at the screening will be actor Robin de Jesús, who plays Michael in the film.

O’Grady notes that at the recent premiere of the film in New York City, Miranda spoke to the audience from the stage, telling them that if he was destined to direct any movie, it was this one.

“Lin saw ‘Rent’ when he was 17 sitting in the last row of the mezzanine, and he saw ‘Tick, Tick… Boom!’ at Jane Street,” said O’Grady. “In 2014, Lin did Jonathan’s role in a production of it, with Leslie Odom in my role.

“Lin has always been a huge supporter of Jonathan’s,” he continued. “‘Rent’ was the first show that had such a diverse cast. Lin and everyone else looked at that and said ‘It’s not all white people. Thank God. it’s diverse.’

“Jonathan understood diversity and inclusion before corporate America woke up to it,” he added. “He cast the best people and they happened to be diverse. That’s such a testament to him. I’m so proud of him to this day.”

In “Tick, Tick… Boom!” the character of Michael is an actor who realizes he is never going to make it, so he goes into the lucrative field of advertising. It’s not totally unlike O’Grady’s own career.

O’Grady recalls that he tried to get Larson work writing jingles for agencies in the city, but Larson, who always struggled financially, wasn’t interested. Instead, he remained steadfastly focused on his single-minded mission to succeed through his art, which is what “Tick, Tick… Boom!” is all about.

“That’s why it’s so near and dear to me. Because the painful irony is he thought I was going to die and only had a couple years,” said O’Grady. “Yet when you see ‘Boho Days’ and ‘Tick, Tick… Boom!’ it’s almost like he's talking about hearing his heart tick and feeling like he's running out of time, because he was close to 30 and didn’t have a New York Times profile yet, and didn’t have anything on Broadway.

“He said Sondheim had ‘West Side Story’ by age 27 and was comparing himself to that. It wasn’t until ‘Rent’ came along that people really listened,” O’Grady said. “And then he died on the first night of previews from an aortic aneurysm. Like all great artists, he launched it, he got the story off the ground and then he left us.”

But O’Grady added that Larson also firmly believed in the power of positive thinking. In “Tick, Tick… Boom!” the great Stephen Sondheim himself, who died on November 26 at the age of 91, shows up at a workshop of his musical. And in ‘Rent,’ though Angel dies, another HIV-positive character, Mimi, lives.

“That was the message of hope,” O’Grady said. “Because I believe underneath all of it, Jon was an optimist. You had to be, to be that confident, that determined and that persistent, because nobody was listening to him.

“It was pure persistence,” O’Grady said. “He would say, I’m going to change musical theater.’ People would look at him like ‘Who’s this nut? Is he for real?’”

He was. And all these years later, it’s somehow fitting that on Thursday, O’Grady will be talking about a film written by his best friend in the confines of the Sag Harbor Cinema, a place both he and Larson frequented in their youth.

O’Grady’s parents always had a summer house in Bridgehampton and he remembers coming to the East End as far back in 1965. As his best friend, Larson often came along and O’Grady recalls the Sag Harbor Cinema serving as their babysitter.

“My dad was working, but my mother was here with her girlfriends. They would take seven kids, put them in the theater, go to dinner and get all liquored up,” O’Grady recalled. “She’d say, ‘If we’re not back by the end of the movie, sit through it twice — and don’t lose your sister DeeDee.’”

As an adult, O’Grady noted that Larson and his girlfriend rented a house in Westhampton. For his part, O’Grady, who has been with his husband John Shaka (currently the executive director of the Sag Harbor Partnership) for 22 years, is confident that had he lived, without a doubt, Larson would have had a home on the South Fork.

“He loved the East End. He loved Bridgehampton and Sag Harbor, and I’m sure he would have had a place out here,” he said. “After getting the loft, the next thing would’ve been a place by the beach. He loved the beach.”

“Tick, Tick… Boom!” directed by Lin-Manuel Miranda will be screened at 7 p.m. on Thursday, December 2, at Sag Harbor Cinema, 90 Main Street. Matthew O’Grady and Robin de Jesús will be on hand to talk about the film and Jonathan Larson’s work. For tickets visit sagharborcinema.org.