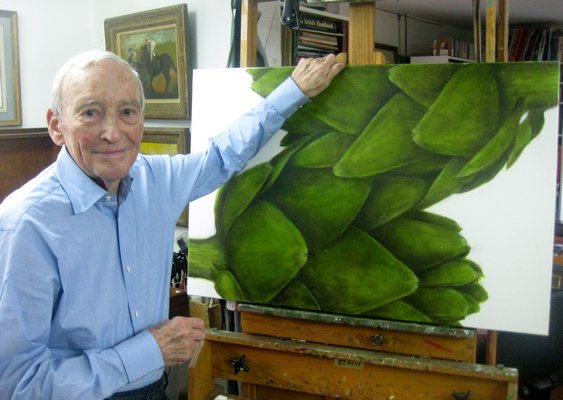 Henry W. Koehler, who was known as one of the top sporting artists in the world, died at his Southampton home on December 24, 2018. He was 91 and, as an artist, was best known for his paintings of equestrian and sailing scenes.

Between 1979 and 2009, Mr. Koehler’s imagery was featured five times on posters for the Hampton Classic Horse Show, while in 1974, his artwork of the Kentucky Derby graced the U.S. postage stamp marking the race’s 100th anniversary. Today, his work can be found in the collections of the National Racing Museum in Saratoga as well as the National Horse Racing Museum at Newmarket in Great Britain.

Also counted among his collectors were presidents and princes, dukes and duchesses, first ladies and even the queen of England.

In a statement emailed last week, Julian Simon Fine Art, a London-based gallery that features the artist’s work, wrote, “Henry Koehler epitomised the quintessential American gentleman. His gentle good manners and demeanour contributed to his enormous popularity in the art world. His love of country pursuits and sports was clearly visible in his art which depicted that world with exquisite accuracy.

“His work was admired and collected by art lovers around the world.”

Mr. Koehler was born on February 2, 1927, in Louisville, Kentucky, to C. Walter Koehler and Julia McGuffin Koehler. Following a stint in the Coast Guard, he attended Yale University and after graduating in 1950 began his artistic career by creating illustrations for publications such as Vogue, The New Yorker, Town & Country and Sports Illustrated. In the late 1950s he traveled abroad to document U.S. Air Force operations, including the airlift of Hungarian refugees, for the Society of Illustrators.

Post-college, Mr. Koehler and some Yale friends moved to New York City and on weekends visited the East End, where he met his wife, Audrey, at a costume party in Southampton in the early 1960s. They married in 1964 and Mr. Koehler raised her two sons, Alexander and Anthony Mason (now a senior national correspondent for CBS News), as his own.

Perhaps one of the most interesting chapters of Mr. Koehler’s artistic life came in the early 1960s with a three-painting commission from the Kennedy family. It began when his painting of a California sailing regatta, which graced the cover of a 1960 issue of Sports Illustrated, caught the attention of Jacqueline Kennedy. She purchased the painting for her husband, John F. Kennedy, and a couple years later, Mr. Koehler was commissioned by the Kennedy sisters to create three paintings, one of each of their brothers—Jack, Bobby and Ted—and their wives, sailing aboard Victura, the family boat.

Mr. Koehler traveled to the Kennedy compound in Hyannis Port, Massachusetts, to photograph and sketch the boat and came back to Southampton to work on the commissions.

“I made sketches and one of the Kennedy sisters came to see them,” recalled Mr. Koehler in an article in The Press in 2013. “Usually when I’m painting, I have the radio on with classical music, but for this visit I didn’t. The sister okayed the sketches and left the studio.”

Minutes later, Mr. Koehler learned that President John F. Kennedy had been assassinated. It was the afternoon of November 22, 1963.

“She found out on the street,” Mr. Koehler said in the Press story. “I thought, ‘Oh, if I’d just had the radio on.’ I was so sad because everyone recognized the whole family and what a way to find out your brother had just been killed.”

Though Mr. Koehler initially assumed the commission had been scrapped, he was soon told that the Kennedy family still wanted the paintings. He completed them in time for Christmas 1963.

The story of the painting Mr. Koehler created of President Kennedy and his wife resurfaced in March 2013 as the subject of a “CBS This Morning” news piece by the artist’s stepson, Anthony Mason. While covering an auction of John F. Kennedy’s presidential memorabilia, Mr. Mason realized that among the pieces on the block was his stepfather’s painting of the first couple. He was able to purchase the painting and brought it back to Southampton to show Mr. Koehler, who had kept all the correspondence related to the work in the attic of his home.

In the CBS segment, among the questions Mr. Mason asked Mr. Koehler was, “…why did you make the background yellow?”

“I just thought it would make a stronger picture,” came Mr. Koehler’s reply. “And if you want a photograph, get a photographer.”

“One of the advantages of being a painter, if luck goes right, you can paint what you like, what you love to do anyway,” Mr. Koehler told The Press in 2013. “I had two major sports—sailing and fox hunting. It was the world I knew and I loved to paint.”

His subjects ranged from jockeys and racing to polo, fox hunting and fishing, and also included dogs and other animals, garden scenes and still life. Mr. Koehler’s first exhibition was in 1961 and he had more than 70 one-man shows in places like London, Paris, Dublin, Johannesburg and throughout the United States. In addition to the Kennedys, Mr. Koehler’s collectors included Ralph Lauren, Paul Mellon, John Hay Whitney, the Duke of Beaufort, Sir Evelyn de Rothschild, the Duchess of Cornwall, Senator Edward Kennedy, Mrs. George Baker, the Duchess of Windsor, the Bancroft Family, Queen Elizabeth II and Prince Charles.

In 1970, Mr. Koehler’s work was featured in an exhibition at the Parrish Art Museum in Southampton. He was later named an honorary director of the museum and his wife, Audrey, who died in 2008 after 44 years of marriage, was a co-founder of Parrish Presents, the museum’s annual holiday bazaar.

“Henry Koehler was a steadfast supporter of the Parrish Art Museum and for many years a valued member of the Board of Trustees,” commented Alicia Longwell, the Parrish’s chief curator, in an email. “A gifted painter himself, his wide ranging knowledge of art made him an invaluable advisor. Once, his keen eye spotted a turn of the century Arts and Crafts frame in the Parrish collection that proved to be a rare example of the period.

“Henry’s courtly and gracious ways will be greatly missed.”

Fellow artist and Southampton resident Paton Miller knew of Mr. Koehler’s work for many years before meeting him through the Spanish artist Gines Pagan, who was Mr. Koehler’s North Main Street neighbor.

“Henry’s career was a long and distinguished one with many well known clients such as John and Jackie Kennedy and Prince Charles, whom he also gave painting lessons to,” explained Mr. Miller in an email. “Henry’s style seemed 19th century, but in his way he was also a modernist.

“The one constant in Henry’s work was an ever present evidence of great draftsmanship. He had an incredible drawing aptitude,” he added. “In Henry’s generation, when he was starting out, if you couldn’t draw, well you might want to consider a different career.

“Besides being a great artist, Henry was a great human being. He was kind, generous and soft spoken,” Mr. Miller said. “A real gentleman. He will be missed.”

A gentleman indeed. In 2017, at the age of 90, Mr. Koehler was named to Vanity Fair’s International Best Dressed List.

In addition to his stepson Anthony Mason of New York City, Mr. Koehler leaves a brother, Robert of Louisville, stepson Alexander Mason of Baltimore and Southampton, and five step-grandchildren, Taylor, Christopher, Emily, Olivia and Nicholas. A memorial service is being planned for a future date. Funeral arrangements are under the direction of the Brockett Funeral Home in Southampton. Memorial donations for Mr. Koehler may be sent to the Parrish Art Museum, 279 Montauk Highway, Water Mill, NY 11976.