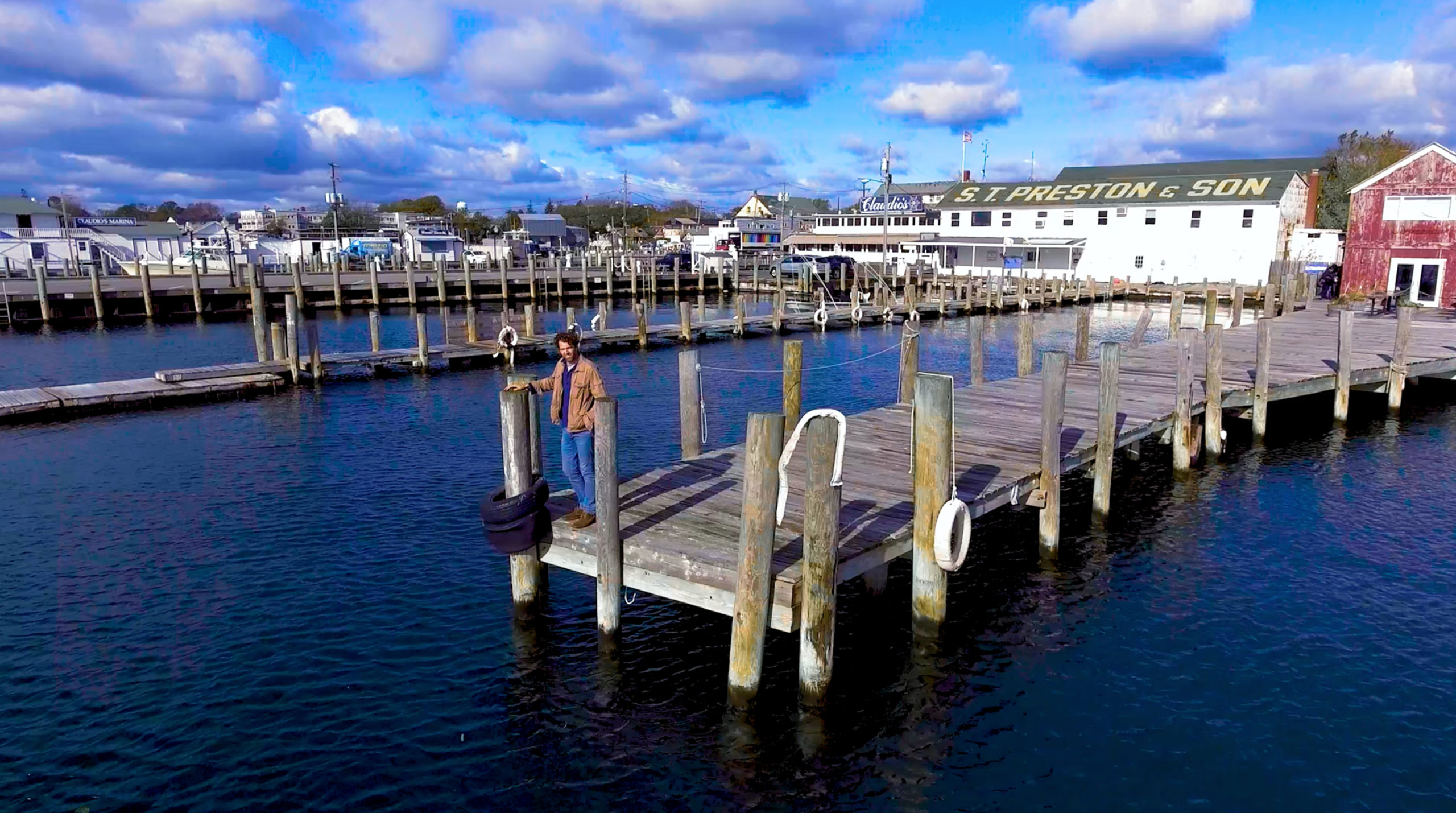 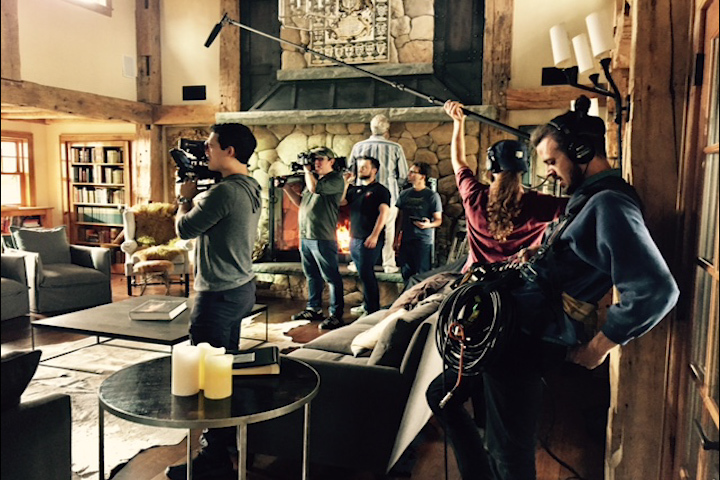 The crew of "Greenport" readies for a take at Breeze Hill Farm in Peconic. 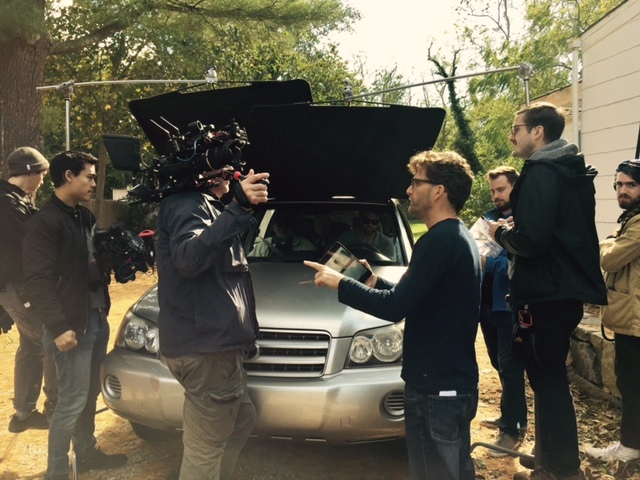 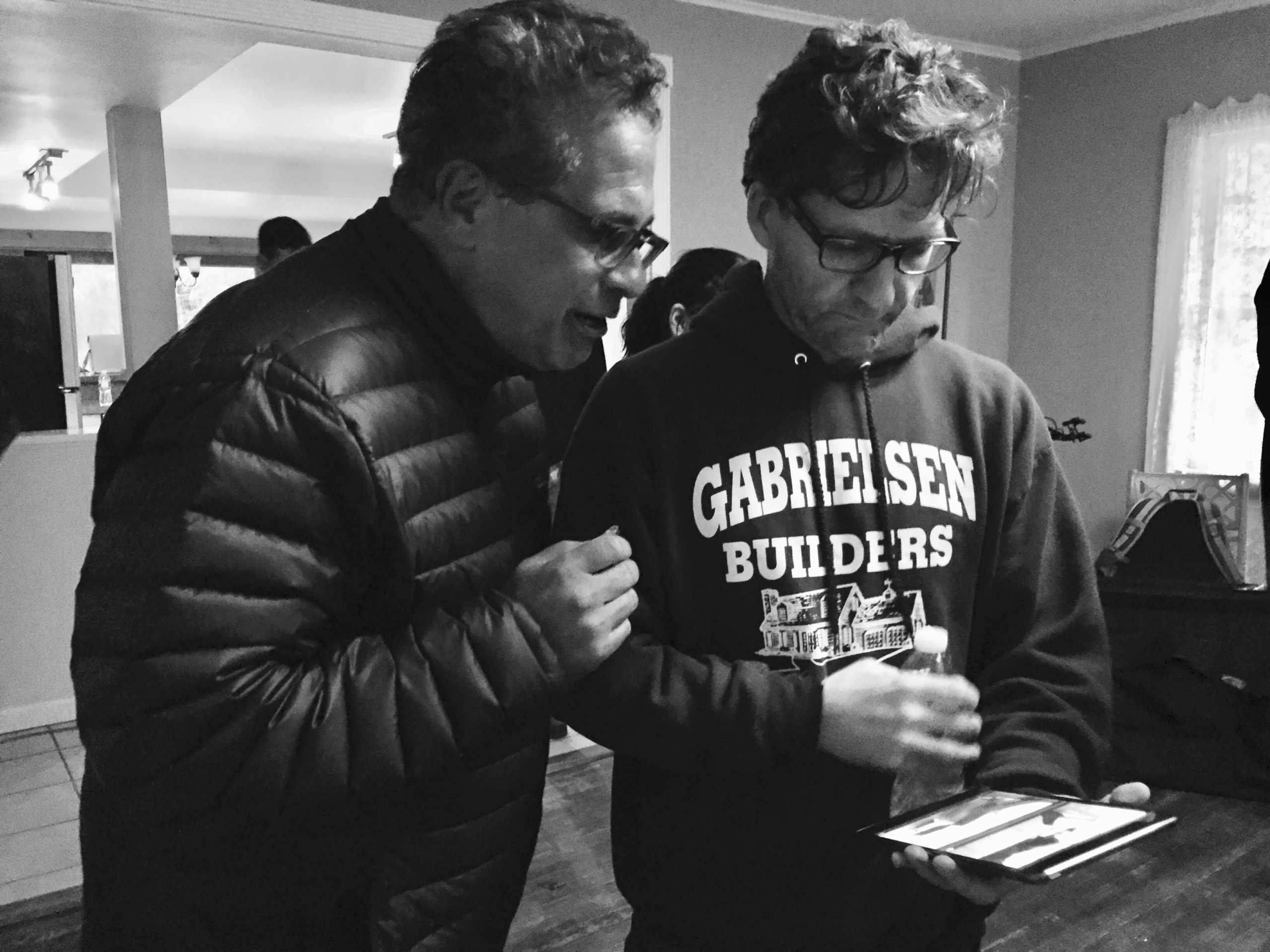 "Greenport" co-creators Tony Spiridakis, left, and Shannon Goldman on location at a private residence in the village of Greenport. 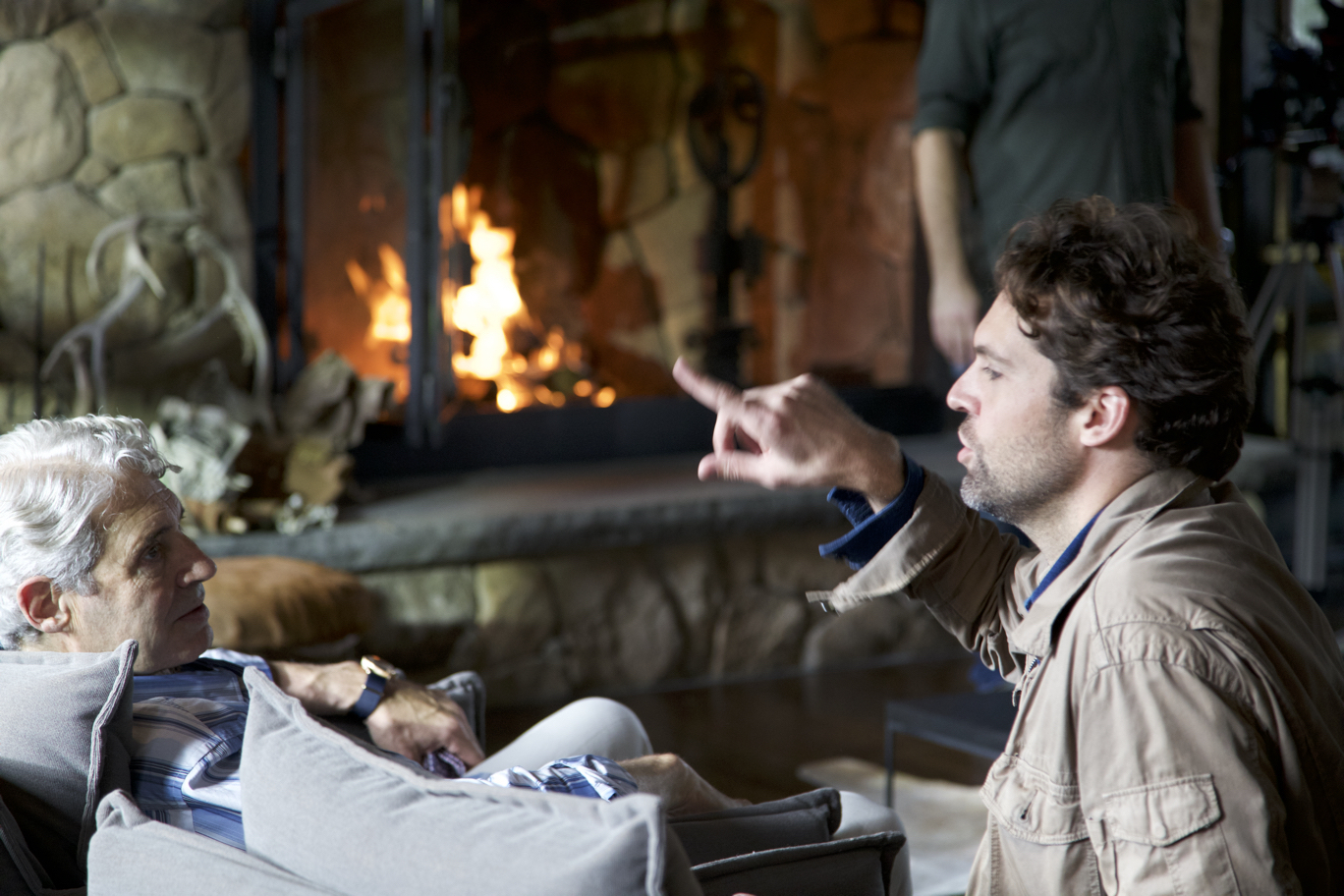 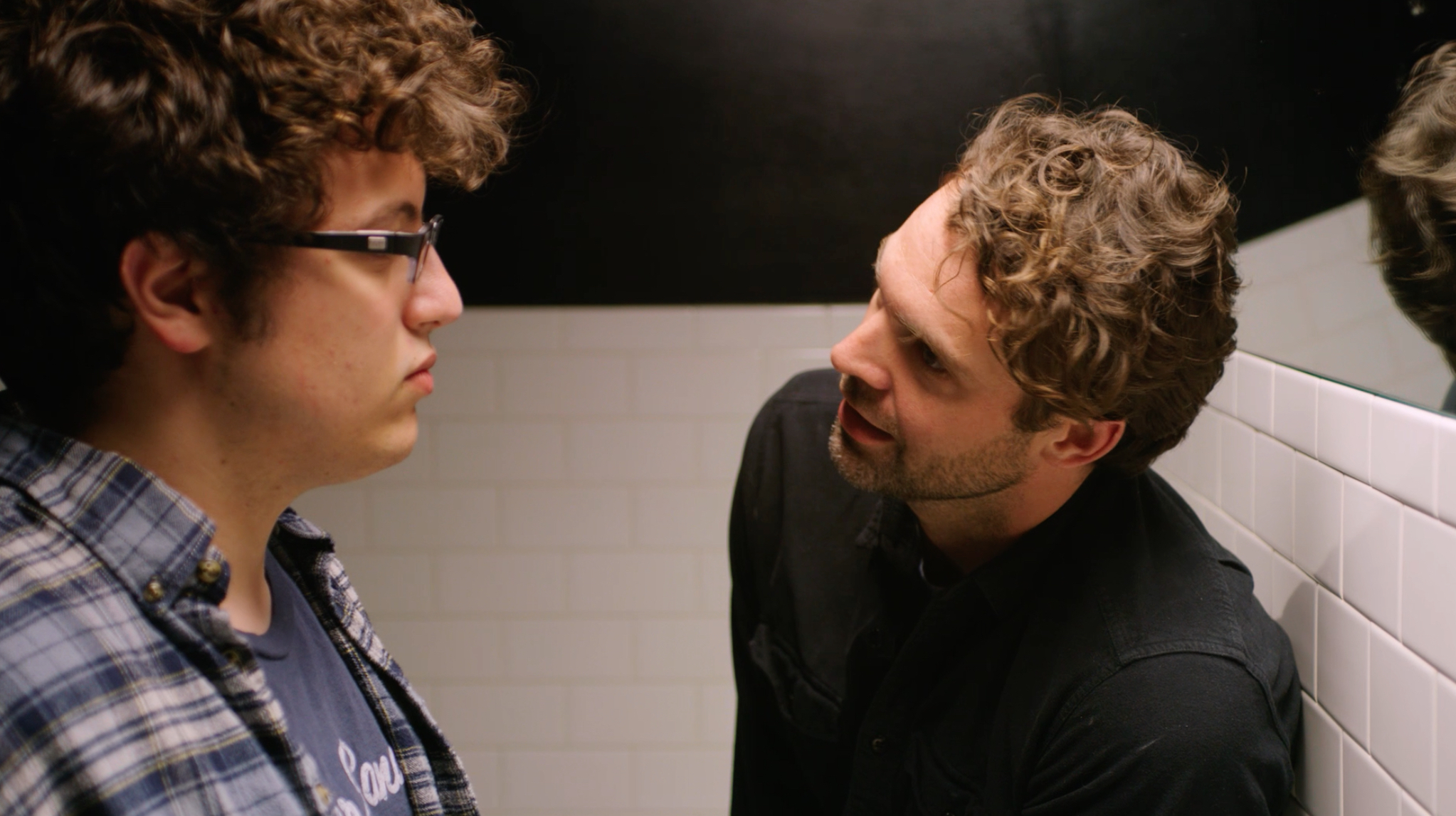 Actors Dimitri Spiridakis (Danny), left, and Rob Hancock (Tony) in a pivotal moment between father and son in "Greenport." 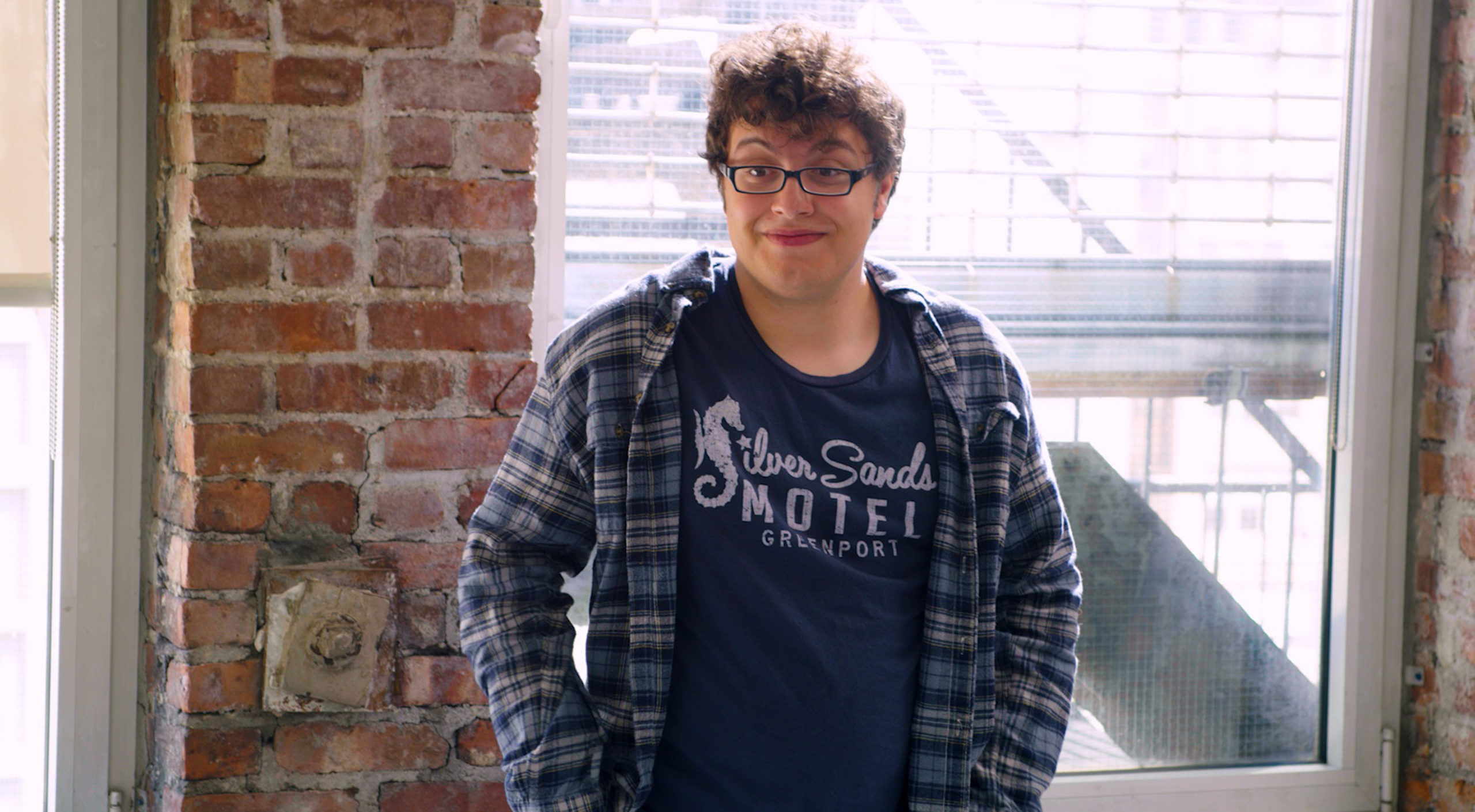 Dimitri Spiridakis (as Danny) in Greenport. 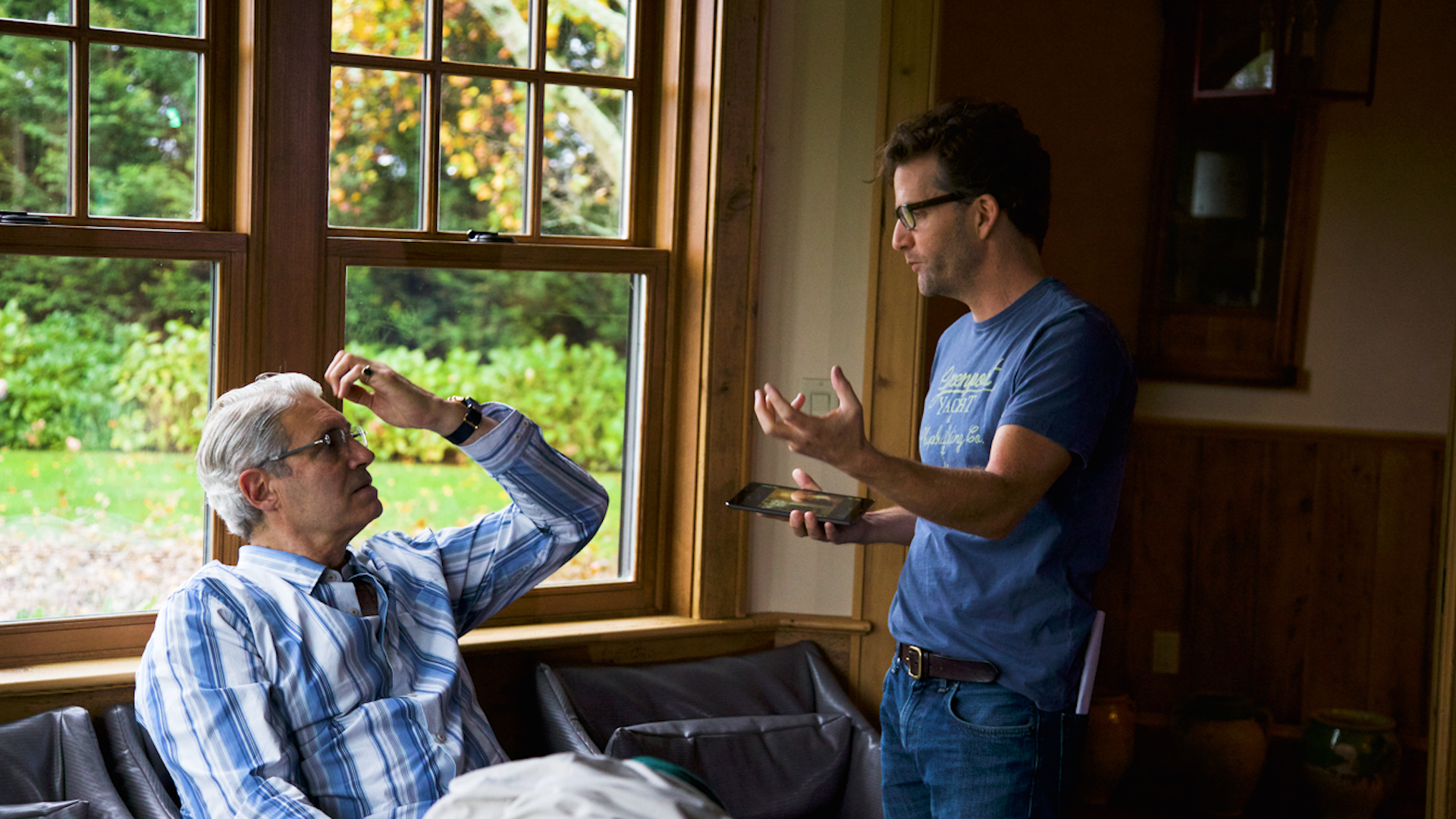 Director and co-creator Shannon Goldman, right, with actor Michael Nouri who plays Avy, an unpredictable financier who can make or break Tony’s film in the show "Greenport." 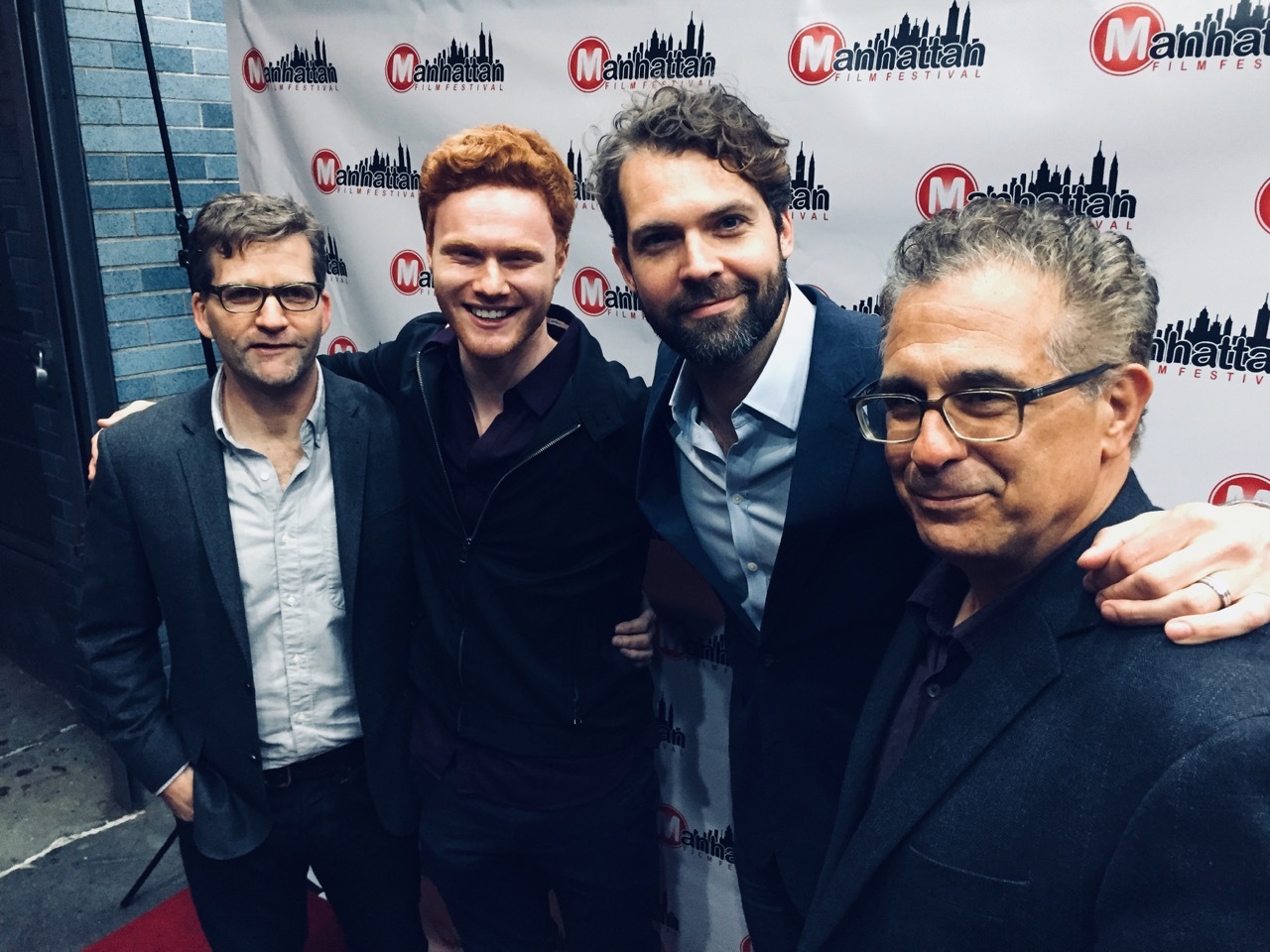 Image of "Greenport," the poster. 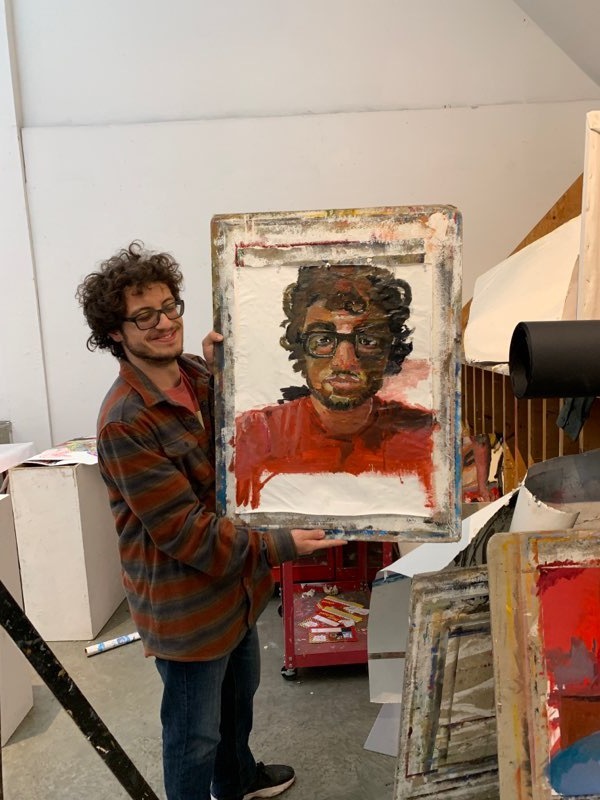 Actor Dimitri Spiridakis with a self-portrait. 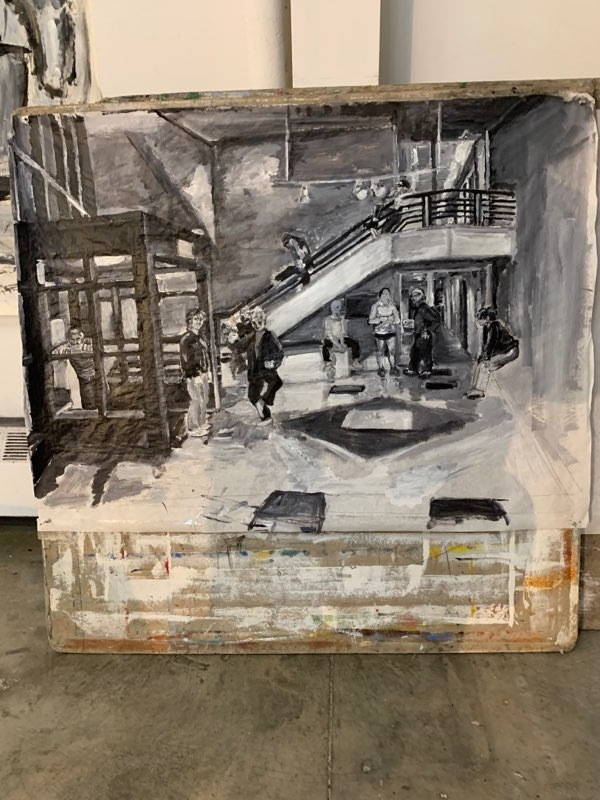 Two and a half years ago, Tony Spiridakis found himself seated in the Greenport Theatre, alternating between laughing, crying and full-blown weeping.

He was overwhelmed, to say the least. And he had every reason to be.

The screenwriter had just watched the 26-minute pilot of his newest television series, “Greenport,” a circuitous project that, after years in the making, had finally found its home at the North Fork TV Festival — with his then 18-year-old son, Dimitri, in the starring role.

They had come a long way, Spiridakis said, from the time Dimitri was diagnosed with autism at age 3, up to a big movie deal that fell apart and would, ironically, inspire the plot for “Greenport.” Last month, the pilot found its new home as an online release, where Spiridakis and his creative partner, director Shannon Goldman, said they hope it draws enough attention to develop it into an ongoing series.

“We think it’s a great show, we think it has a great message,” Goldman said. “It’s important, it’s inclusive, and we wanted to show it to as many people as possible, and hopefully garner as much interest as we can.”

Written and shot on the North Fork, the heartfelt comedy follows a struggling Hollywood filmmaker determined to show the world that his son can do anything — despite the teenager’s autism — while grappling with his own ambition, family drama and the balance necessary to navigate it all, in the midst of his film spiraling out of control.

It is a familiar story for Spiridakis, who had lost funding for his own film, “Inappropriate Behavior,” just as he was moving his parents into Peconic Landing and raising his two children, both of whom have special needs.

Financing was in place and Charlie Sheen had even expressed serious interest in playing the father — who, in the film, is sharing custody of his autistic 10-year-old while trying to make it as a stand-up comedian in Los Angeles. But Sheen’s subsequent struggle with substance abuse was only one of the roadblocks that ultimately shut the project down.

Spiridakis and Goldman decided there was only one thing left to do. They would write, shoot and produce a semi-autobiographical comedy that revolved around the aftermath. And they would cast Dimitri as the lead.

“We knew early on that Dimitri would be great in this role,” Goldman said. “The question as to whether or not he was gonna do it was, one, if he was available and, two, if he was interested, which was a legitimate question. He kind of did it for Tony.”

“And, three, if we had enough money for him,” Spiridakis added.

“Yeah, exactly,” Goldman said with a laugh. “We auditioned a bunch of young autistic teens and I can say, with a completely unbiased opinion, he was far and away the best.”

The road has not been an easy one for Dimitri, his father explained. Four schools kicked out the extremely talkative student before he turned 18, his humor and behavior deemed tasteless — often drawing from memorized book passages and movie lines that he spouted off — until Spiridakis realized there was a certain logic behind them.

“In California, I forced him to take the teen program at Second City, where he could do improv, and he was hands down the most amazing. Why? Because the things he said that were inappropriate were so brilliant as a comic moment,” explained Spiridakis, who splits his time between Greenport and the West Coast. “Whatever came out of his mouth, everybody was hanging on the edge of their seat waiting, and he delivers.”

The same was true from the set of “Greenport,” the first production by the Manhattan Film Institute, a not-for-profit educational program that Spiridakis co-founded in 2012.

“We knew from working with Dimitri at MFI that he was, in fact, a legitimately good actor,” Goldman said. “Perhaps part of his autism is he is able to do the thing that all actors really want to do, which is live in the moment. For Dimitri, the choices are always clear when he’s acting. It’s either right or wrong, and he picks a path and it makes him a great actor.”

Outside of a source for comic relief, Dimitri proved to be a soothing presence for his father, Spiridakis said.

“Dimitri helped calm me down. In other words, I saw in him what the actors playing opposite him saw in him — which was, ‘He just is,’” he said. “There was something profound about that.”

“To see Dimitri do what he did is completely humbling,” Goldman said.

In a roundabout way, the online release of “Greenport” has also reintroduced and reinvigorated “Inappropriate Behavior,” said Spiridakis, who is now fielding interest from writer, director and producer Bobby Moresco, whose script for “Crash” won the Academy Award for Best Original Screenplay.

“I have to say, the reaction to this release has been overwhelming and it’s positive. It felt like it was happening for the first time, and that was kind of amazing,” Spiridakis said. “It showed you the power of this platform, and this was Shannon’s idea to do it this way, and it really was eye-opening.”

“It does have a pretty significant reason to exist, regardless of where it goes from here,” Goldman said. “Hopefully, we get to make it a TV show, and if we do, I hope that Dimitri’s available for us, because he might not be.”

The director paused for dramatic effect. “He’s moving on,” he said.

“He just won a scholarship to go to Rome to paint for a month in June,” his father explained.

“Dimitri is showing that an autistic kid can do anything,” Goldman said. “He’s just killing it.”

The burgeoning painter is on the cusp of completing his third year at Bard College, where he is studying fine arts. Looking back at “Greenport,” the creative team now realizes that whenever Dimitri was drawing on his iPad with his stylus, he was actually building his portfolio and “literally becoming, before our eyes, an amazing artist,” his father said.

“The one thing that I always believed about Dimitri and his autism was, ‘Disability or superpower?’ and I went with superpower — totally, all in, superpower, not disability,” Spiridakis said. “It’s not a disability. And it’s been amazing to see how that lit him up.”

To watch the pilot episode of “Greenport,” visit greenporttheshow.com/online-release.