View From Bonac: A Visit With Springs Poet Grace Schulman 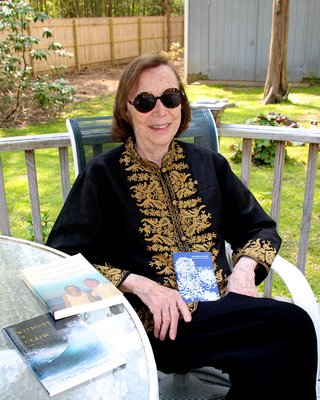 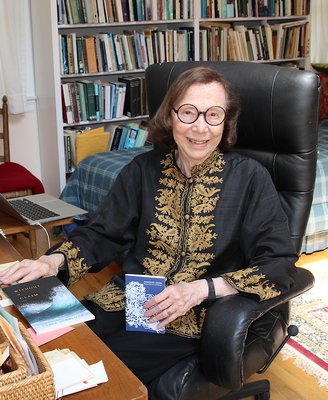 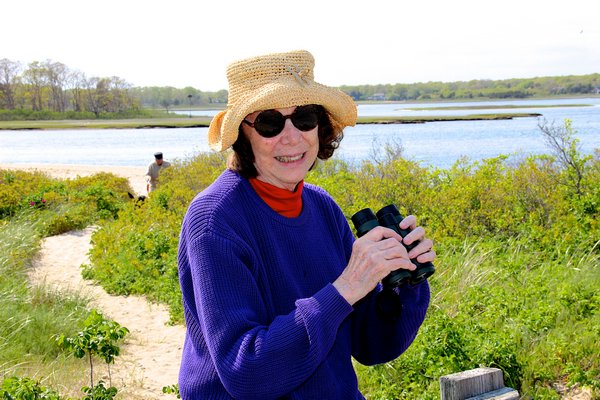 Poet Grace Schulman, of Springs, had the great honor of being elected to the American Academy of Arts and Letters as a member in the Department of Literature. The 250-member honor society was founded in 1898 and chartered by Congress to “foster, assist, and sustain an interest in literature, music and the fine art.”

Ms. Schulman was inducted in a ceremony held in Manhattan on Wednesday, May 22, along with eight others in the field of literature, including Ian Frazier, Edward P. Jones, Suzan-Lori Parks, Claudia Rankine, Stacy Schiff, David Sedaris, Natasha Trethewey, and Terry Tempest Williams.

She is no stranger to awards, having won the Poetry Society of America’s highest honor, the Frost Medal for Distinguished Lifetime Achievement in American Poetry in 2016 and a Guggenheim Fellowship for Poetry in 2004. She has served as director of the Poetry Center at the 92nd Street Y, the poetry editor of the Nation, and is a Distinguished Professor of English at Baruch College.

Ms. Schulman's latest book, “Mourning Songs: Poems of Sorrow and Beauty,” published by New Directions this month, is a collection of some of her favorite poems by Elizabeth Bishop, Gerard Manley Hopkins, W. S. Merwin, Marianne Moore, and Dylan Thomas. The pocket-sized book is a beauty, with white asters on a navy background, a perfect gift and not just for the grieving.

Like her literary memoir, “Strange Paradise: Portrait of a Marriage” published by Turtle Point Press last August, the anthology is dedicated to the memory of her late husband Jerome L. Schulman, a brilliant virologist, who died at the age of 89 in 2016.

The couple met when the young poet was playing guitar and singing folk songs at the fountain in Washington Square Park.

“In that stone ambiance on a cool September late afternoon, I sat strumming the guitar my father had bought for me while I was a student at Bard College five years before,” Ms. Schulman wrote in her memoir. “Raised on West Eighty-Sixth Street in Manhattan, I was singing a rural Scotch-Irish ballad whose origin was far from mine.”

She may not be “a lass from the low country,” but she and her husband couldn’t have loved their country home in Springs any more. They purchased the small cottage in 1977 for $29,000. Their favorite pastime was taking walks on the beaches of Accabonac Harbor and Gardiners Bay, keeping an eye out for shorebirds.

“I miss him terrible. His grave is right there,” she said sitting in her office chair, peering out a window overlooking her backyard. A picture of the couple sits on her desk, and it also serves as the cover of “Strange Paradise.

“I felt that’s what he would have wanted,” she said. “It’s so much more him than some Jewish cemetery, crowded like a subway.”

In addition, Ms. Schulman released her husband’s ashes at all the places he loved; Louse Point, Gerard Park, and Fireplace Bay.

His grave is marked by a circle of found stones, dappled with sunshine in the midst of tall pine trees. The stones are in memory of a drive through the English countryside when Mr. Schulman “stopped the car to stand silent” over a Neolithic remnant.

“Just think of how many wars have passed over these stones,” he said at the time, as noted in her memoir.

A pinwheel, inside the circle, tells which way the wind is blowing.

“The pinwheel can talk for him,” she said.

Next to the photo on her desk, there is a vase with a few twigs. The silvery seed pods of the lunaria plant, delicate as paper, is the subject of one of her new poems. She read the poem aloud from her chair and immediately started to rework it. “I like the second part better,” she said, putting pen to paper.

The walls of her office are decorated with watercolors by the artist Chan Ky-Yut which illustrate her 15-part poem “One Year Without Mother,” from her book “The Paintings of Our Lives,” published by Houghton Mifflin in 2001.

As the poet took a few minutes for revisions, I admired the series of paintings and the elegy for her mother. Part seven, entitled “Eagle,” quotes another poet, “Look there! It waves as the bird looks down and watches watches watches.”

I couldn’t help but recall a recent drive Ms. Schulman and I took around Accabonac Harbor, searching for the eagle pair that took over an osprey nest, before the ospreys arrived. We spotted one sitting on a bare branch, atop a tree. She compared the majestic bird to a poet, quietly sitting, and observing. Watching, watching, watching.

“That’s the first eagle I’ve seen in the wild,” she said excitedly, as we spotted the mate swooping over saltwater meadows. Her new manuscript will most definitely include a new poem about an eagle.

She feels that her last two book of poems “Without a Claim,” and “The Broken String,” both published by Mariner Books, Houghton Mifflin Harcourt in 2013 and 2007 respectively, may have exhausted her love of Springs.

“So many poems about this country,” she lamented. Perhaps sensing the sadness in my expression, she tells me the birds are new territory, ripe for inspiration. New poems I can’t wait to read in print.

Ms. Schulman has been a great inspiration to me, to her students, who still gather at her house for Chinese food, even though she is on a sabbatical, and to a world of poetry lovers. That much was evident at her induction into the American Academy of Arts and Letters last Wednesday, where she was seated in the front row on a grand stage, filled with the brightest minds.

I’m sure her mentor Marianne Moore would be proud. Ms. Schulman carries Ms. Moore’s torch, in poetry (she edited “The Poems of Marianne Moore,” published by Viking Penguin in 2003), and in feminism. Her fiercely guarded independence plays as big a role in her life as anything.

Last year, she spent the month of October in Italy as a Bogliasco Fellowship recipient, where she worked on her new poems. She followed that up by giving more than a dozen readings in New York City and San Francisco. And she’s not done yet. You can catch her reading new work at the Amagansett Library on Saturday, August, 3 at 6 p.m.

She’s very humble about her honors and has a great sense of humor, albeit on the dark side. Before the ceremony last week, I asked her what she thought of the induction. “They’re going to crown me, or haze me,” she joked.

Not giving up, I asked her again, two days after the ceremony, and she admitted “It was a joyful day, though somewhat intimidating.

“I walked through the Academy’s photograph gallery of members past and saw the likes of Henry James, Mark Twain, William Faulkner, Marianne Moore, and on, and couldn’t believe seeing my face among them. And our books in glass cases. And talking with writers and artists I’ve so admired. Was it all a dream?”

That’s the real life of a poet who has worked hard her entire life, pushed for poetry and the rights of women, and was always ahead of the game, without giving in, without pandering.

After a chat in her office, we leave her house for a walk at Louse Point, and admire a snowball tree in her front yard.

“No one planted it,” she said of the bright white blooms surrounded by cedars, the ground blanketed in lily of the valley. “It was a gift.”

At the beach, we watched ruddy turnstones, and willets comb the shoreline, as eagles and ospreys kept their eyes on their fledglings.