With Her Gun, An Updated Annie Will Steal Your Heart - 27 East

With Her Gun, An Updated Annie Will Steal Your Heart 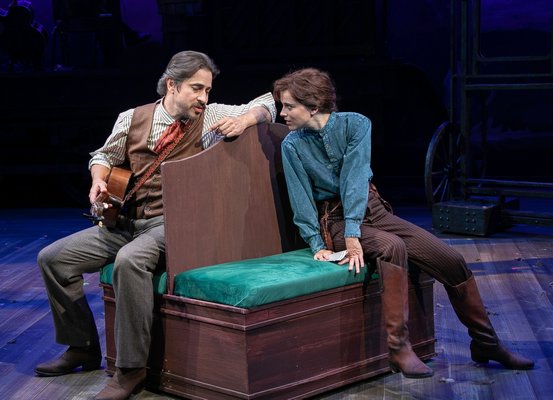 Matt Salvidar and Alexandra Socha in "Annie Get Your Gun" at Bay Street Theater. 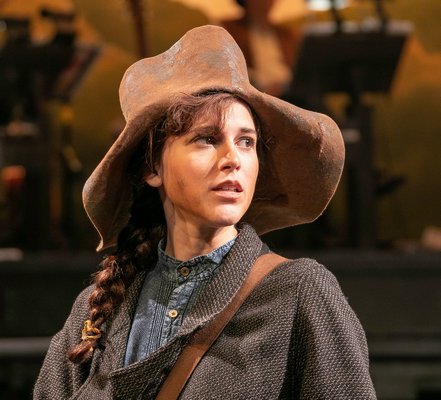 Alexandra Socha in "Annie Get Your Gun" at Bay Street Theater. 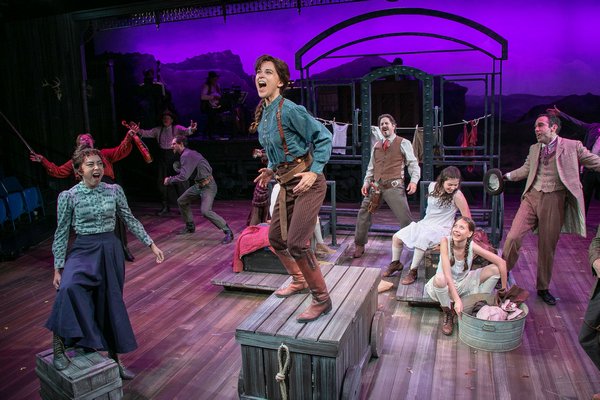 "Annie Get Your Gun" company.

Having come of age in the era of French New Wave cinema, and discovering in my teens that I had a penchant for satire, I was not looking forward to something that sounded as corny as “Annie Get Your Gun,” Bay Street’s late summer offering.

So what if Irving Berlin wrote the music? Yawn.

Not that I had ever seen any version of “Annie,” and there have been several, starting back in 1946. According to press reports, revivals have not always done the show right. But given that Bay Street often brings in Broadway-tested talent, I thought I’d be writing a tepidly enthusiastic review of the theater’s annual big musical revival. Hometown critic can’t kill the hometown theater, now can she?

Whoa, was I wrong!

Only a curmudgeon determined to stay that way could resist the feel-good appeal of director Sarna Lapine’s fresh rendering of “Annie Get Your Gun” currently spilling off the stage on Sag Harbor’s Long Wharf with abundant joie de vivre. Alexandra Socha as Annie is 110-pounds (if that) of sass, brass and sweetness with a strong, resonate voice. In Ms. Socha’s superb rendering of Annie, you watch her grow from uneducated teenage hick to world-class entertainer who wowed the crown heads of Europe, but who still has to woo fellow-sharpshooter and worldly lothario, Frank Butler (a slyly engaging Matthew Saldivar).

Of course Annie is going to end up with Frank Butler — this is musical romcom, after all — but not until we uncoil all the kinks in the road to true love and marriage.

The show is chock-a-block with tunes and lyrics that are as comfy as well-worn shoes: “Doin’ What Comes Naturally,” “Anything You Can Do,” “The Girl that I Marry,” “I Got the Sun in the Morning,” and the show stopper, “There’s No Business Like Show Business.” Add to that a new favorite of mine, “You Can’t Get a Man with a Gun,” which sounds like pretty good advice to anyone.

The live music on stage comes from not only a quartet on an elevated platform, but also the actors themselves. George Abud is first-rate as show manager Charlie, and punches a happy surprise when he picks up a fiddle and plays a mean tune. Likewise, Mr. Saldivar acts, plays the guitar and the harmonica.

To create this modern prototype of Annie, Ms. Lapine went over every single script of the show, including an original script by the sister and brother team, Dorothy and Herbert Fields, some of which did not make it onto the original Broadway stage. Ms. Lapine kept out the two original songs that Native Americans found offensive enough to protest at theaters and the 1950 movie, and found dialogue to suit a modern mindset.

Hey! Musicals are period pieces often tied to cultural trends of the day, and as such, they are easily updated and rearranged. Incidentally, Ms. Lapine also directed last summer’s successful “Frost/Nixon” at Bay Street.

The sly political commentary in Sitting Bull’s dialogue in this production is definitely of the moment. SB, as he is called in a current shorthand, did become a performer in Buffalo Bill’s Wild West Show for a time; here is a taciturn monolith of a man portrayed by a riveting Jonathan Joss, who actually is of Native American ancestry. When he refers to Indian land — most of it stolen by the government — he’s talking about oil revenues (50,000 barrels a day!) and opening a “gambling parlor” when that dries up, and we know how that went. The old trope of Native Americans greeting one another with the word “How” and an upraised hand turns into a question about … business.

Showman Buffalo Bill is portrayed by an excellent Orville Mendoza; his competitor, played by Oge Agulué, is a gift as the glad-handing, back slapping Pawnee Bill, though both men are cast across authentic type.

Yet there is more than current idiom going on here. When Frank Butler and Annie are apart for a spell, he ends up with a gaggle of groupies, all women whose long white gloves bespeak refinement and a class Annie will never be part of. Was the Jewish Mr. Berlin also referring to white-shoe law firms as well as the debutantes of the day? You decide.

Bay Street again pulls off a minor miracle on its smallish stage and manages to make it appear much bigger with Mikiko Suzuki MacAdams’s moveable set pieces on wheels that seamlessly transform the set without much ado. Dance numbers are enhanced by the unexpected en pointe bits of ensemble member Allison Walsh, a nice touch, and had me wanting to see more of her.

“Annie Get Your Gun” first came to the Broadway stage when a war-weary America was looking for something bright and reminiscent of what seemed like a sweeter past, with no thought of the horrors of war and Hitler’s Holocaust. Given today’s depressing partisan political mood and incarceration camps at our border, this “Annie Get Your Gun” feels like the right tonic for the moment.

It's already a smash. The run has been extended to September 1.

PS: Dear Friends, please stop asking if I truly mean what I say in my reviews. I do! This is a show not to be missed!

“Annie Get Your Gun” runs through September 1 at Bay Street Theater, Long Wharf, Sag Harbor. Tickets start at $40 at baystreet.org or 631-725-9500. Each Tuesday is Talkback Tuesday, and immediately after performances is a conversation with members of the cast and creative team. On August 13, Shinnecock Nation member and multi-disciplinary artist Shane Weeks will take part in Talkback Tuesday. Sunday matinees are free for students with ID. Other offers include $20 under 20 and $30 under 30 tickets.