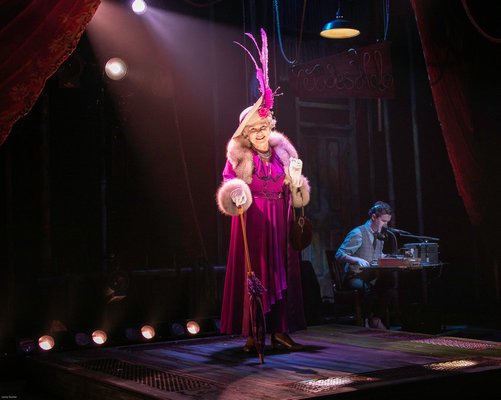 Q: What happens when a legendary actress returns to the Broadway stage for the first time in four decades, bringing with her a lifetime of experience—but not much of a memory?

A: She promptly gets a little help from a backstage friend.

That’s pretty much the scenario in “The Prompter,” Wade Dooley’s smart and nimble new play currently enjoying its world premiere run on the Bay Street Theater stage in Sag Harbor.

Directed by Bay Street’s artistic director, Scott Schwartz, this gem of a comedy opened June 1 and it stars theatrical powerhouse Tovah Feldshuh as aging actress Irene Young, who has been cast in a remake of Oscar Wilde’s “The Importance of Being Earnest.” In the role of Wade, her faithful prompter, is Mr. Dooley himself, who wrote the script after working as a professional Broadway prompter.

This is an absolutely hilarious show, made great not only by Mr. Schwartz’s direction and staging—kudos to Kevin Depinet for designing a beautiful and cleverly functioning set that evokes the backstage life, right down to the sandbags and ghost light—but also by the confidence of its two stars.

At the opening-night performance, when an audience member dropped an object on the floor, Ms. Feldshuh, who was in the midst of a monologue, paused to shoot a long, menacing glance in the general direction of the offender—just what a diva like Irene Young would do. It was a great moment, and one that made even those in the seats quake a bit in fear.

Ms. Feldshuh and Mr. Schwartz have worked together before, perhaps most notably when he directed her in the 2003 production of William Gibson’s “Golda’s Balcony” at the Helen Hayes Theater. That production became the longest-running one-woman show in Broadway history. In this production, the talented Ms. Feldshuh is an absolute scene-stealer, as she should be, given the proclivities of the grand diva she portrays.

But the sheer beauty of this show lies in the fact that “The Prompter” is really Wade’s story. It’s a treat to see him embrace it with enthusiasm, humor and skill. Throughout the one-act play, he takes us on an emotional ride through his mind and heart as he acts out fantasies that aren’t quite a reflection of reality, despite how much he would like them to be.

“The Prompter” first caught Bay Street’s attention when it was read as part of the 2018 New Works Festival at the theater. It was so well received that the decision was made to produce it as the first summer show of this season.

Under Mr. Schwartz’s nimble direction, blocking is tight, pacing is fast and the material is hilarious. Though this is a two-person show, it has loads of layers, thanks to flashbacks and unseen characters who interact with Wade and Irene through offstage voice projection.

Speaking of offstage, as Irene’s prompter, that’s where Wade spends most of his time. Relegated to “Wade’s Hole,” as it is called, he works in the basement of the theater, sitting at a table with a microphone, headphones, sound equipment and a copy of the script. From his perch in the building’s bowels, Wade feeds Irene every line and stage direction for every show, eight times a week, via the earpiece in her right ear.

All in all, it’s a system that works surprisingly well.

We quickly learn that being a prompter is a quirky, odd and largely thankless position. Sure, it puts Wade about as close to the stage as he can get without actually being on it. But no legitimate actor, particularly Irene Young, would ever admit that a prompter is required for her to pull the whole thing off.

On the occasions when the technology breaks down, leaving Irene without Wade’s reassuring voice in her ear, she panics and lashes out at him, accusing him of intentionally leaving her in silence. This is an actress who isn’t what she used to be, and Irene’s fears and deep insecurities speak to the loneliness that mark her life and the aging process, despite her great success on stage.

As Irene recounts her failed marriages and the existence of a largely absent son, Wade, too, sees shades of his own life as relationships falter due to his brutal schedule as Irene’s prompter, confidante and perhaps one true friend.

At least, he’d like to think they’re friends. For Wade, flashbacks and fantasies abound, including memories of Irene Young as the star of “Grammy’s Back Yard” a children’s TV show from his youth, in which she showered young viewers with love, affection and praise. But in real life, these are not things that Irene Young shares willingly.

Wade’s reenactments of his interactions with Irene are often lived twice—first, as if she’s still the loving and tender Grammy from TV, and, the second time around, as the event really happened.

The real-life Irene Young presents a cold, hard truth for Wade, and he soon realizes that the life of a prompter is one of gifts unacknowledged, thanks not offered, and a denial of his very existence. But that’s as it must be. After all, Wade’s job is to remain in the shadows while the actress he supports emotionally, literally and figuratively every night garners the glory and accolades that would not be possible were it not for him.

A thankless job indeed—but such is life in the theater.

Don’t miss this one.

The world premiere of Wade Dooley’s “The Prompter” runs through June 16 at Bay Street Theater in Sag Harbor. Special offers include free Sunday matinées for students, “$30 under 30” tickets and “$20 under 20” tickets. A “Talkback Tuesday” with cast members will be offered on June 11. For tickets, call 631-725-9500, or visit baystreet.org.

Please Note: This event has been suspended as of June 3, 2020 — notification will be posted if it is rescheduled. - ed Artists don’t stop working just because they’re socially distancing. On Friday, June 5, at 5 p.m. Alicia G. Longwell, Ph.D., The Lewis B. and Dorothy Cullman Chief Curator at the Parrish Art Museum, will lead a live-stream illustrated conversation with Sag Harbor-based photographer and Parrish collection artist Mary Ellen Bartley, who recently completed a 30-day photography project in quarantine. “Mary Ellen Bartley’s story unfolded during a socially-distanced conversation on a neighboring front porch and I immediately wanted ... by Staff Writer

Tom Clavin’s most recent book, “Tombstone: The Earp Brothers, Doc Holliday & the Vendetta Ride ... 27 May 2020 by Staff Writer
Sign in to comment