Yacouba Sissoko Channels The Voice Of The Kora - 27 East 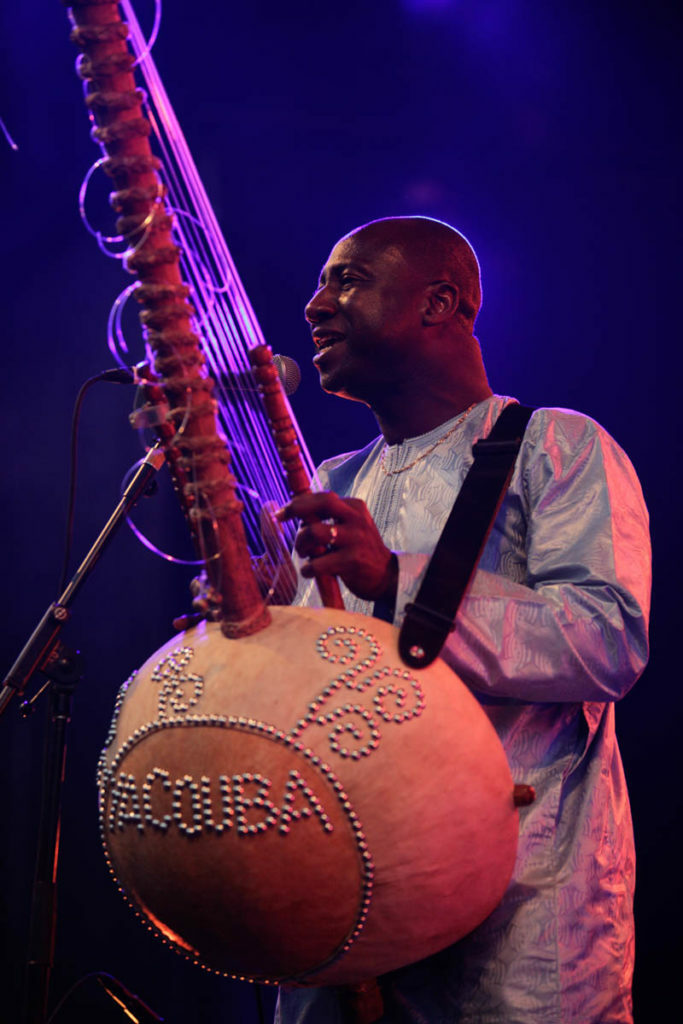 Yacouba Sissko performs on the kora at The Church in Sag Harbor on July 7. COURTESY THE ARTIST

When Yacouba Sissoko comes to The Church to play his kora as part of Hamptons Jazz Fest, he will bring a tradition that has been passed down through the generations, and can be traced back hundreds of years in Africa. But at his July 7 performance in Sag Harbor, it will be all about the present moment.

“I was born into a kora family,” Sissoko said in a recent interview. “My ancestors played the kora as a solo instrument in the 13th century.”

This was back when Sissoko’s ancestors, who lived where Mali is today, were part of the Mandingue Empire. They built koras out of gourds, animal skin and wood, the same way the instrument is constructed today. The kora has 21 strings, which are now typically made of nylon or fishing line.

“The combination of the gourd and the cow skin make the instrument resonate beautifully,” said Sissoko.

Add to that the wood of a special tree that grows in West Africa — the Guenou tree.

“The Guenou is a powerful tree,” said Sissoko. “It gives the best medicine. The leaves can heal so many sicknesses and the wood is strong and hard.”

Many traditional West African instruments, like the xylophone and the banjo, are made from the wood of this tree.

“Even in the village, the old man would make a bench from that wood, and it has endurance,” said Sissoko. He refers to xylophones that are over 800 years old, made of that same wood.

With these powerful materials, the kora creates a sound that is beyond beautiful. It’s meant to be felt on a deep level, and to tell a story. Sissoko tells the story of his ancestors every time he picks up his kora.

Sissoko is what is known as a Djeli — or a musical storyteller — in West Africa, a position that is inherited through a family’s bloodline. Djelis are the keepers of the history and fables of society and the kora is the instrument that is traditionally used to accompany their songs.

Sissoko was born in the town of Kita, in a region of Mali known as a stronghold for Djeli clans. His mother, Oumou Tounkara, was a celebrated singer and his grandfather, Samakoun Tounkara, was honored by the president of Mali for his mastery of the kora. At age 9, Sissoko began learning the instrument and the oral traditions associated with it from his grandfather. By age 15, he was touring the country sharing the stories that had been passed down through his family for centuries.

“My ancestors used to play for peace,” he said. “And they told a family story. Now, I feel like I am telling a story. As soon as you touch the kora, you know what you learned. What your parents and grandparents told you about the kora. So you start playing, and it’s like a movie playing in front of you. It’s a reminder.”

With the teachings passed down through generations, Sissoko then brings his own fresh perspective to his performances.

“You have your own inspiration,” he said. “People get into the kora and stay connected to it and listen deeply because they feel like they’re listening to a voice talking to them.”

Even though kora is often played as a solo instrument or in a classical style, when Sissoko joins jazz instrumentalists, the kora speaks through its solos.

“Of course the kora can do jazz,” said Sissoko. “Everything depends on the musician, the player. My vision, becoming a musician, was not to be limited.”

While he has utmost respect for the tradition and the heritage of the kora, he also wants to play it in the present moment, and to apply this tradition to today’s world.

“The kora can do so many things,” he said. “Not just the tradition.”

During the pandemic, Sissoko created a lot of music, and put together an album that will come out later this summer called “Blessing.” The songs process present-day issues, like COVID-19 and Black Lives Matter, through the kora. No matter the complexity of life, Sissoko finds that the instrument has the capacity to heal.

“Kora has a spiritual feeling, energy,” he said. “Even if I’m sad when I sit down to play kora, kora takes my sadness away. When I am sick and I play, I feel like I am getting injected with a treatment to make me heal. Kora always makes me calm, and gives me a lot of joy. This makes me play with all my energy and power, to make everyone listening and watching feel that too.”

Yacouba Sissoko and SIYA, his six-piece band, perform on Thursday, July 7, at 6:30 p.m. at The Church, 48 Madison Street, Sag Harbor as part of the Hamptons Jazz Fest concert series. Tickets are $20 (free for ages 15 and under) at hamptonsjazzfest.org or thechurchsagharbor.org.

Jacques Schwarz-Bart is a French jazz saxophonist. He is responsible for creating two surging new styles: Gwoka Jazz, and Voodoo Jazz, which reunites jazz music with its Afro-Caribbean and spiritual origins. Jacques’s impressionistic writing, powerful tone, and wide-ranging language — both lyrical and angular — have fueled a growing presence on the world stage. Schwarz-Bart only started playing the saxophone at 24 and after three years attended the Berklee College of Music.

Albino Mbie is an award-winning musician, guitarist, singer, composer, sound, and mixing engineer. Born in Maputo, the capital of Mozambique, a country in southern Africa — Mbie built his first guitar from a 5-liter can of oil, scrap wood, and strings made from electrical cords. Mbie began playing in several local bands before receiving a full scholarship, through the African Scholars Program, to attend the Berklee College of Music. Today, Albino’s music succeeds in combining his musical experiences from Mozambique, the U.S., and many other places around the world.

Emilio Solla is a Latin Grammy winner and multi-Grammy nominee, pianist and composer. Born in Argentina and based in New York, Solla has eleven CDs as bandleader and more than forty as arranger/producer. He is regarded by peers and critics as one of the most outstanding and unique composers in the Tango-Jazz field, a musical language which blends Argentine tango and folk with jazz and other contemporary music styles. Solla has performed all around Europe, Japan, the U.S., and Latin America.

Oscar Feldman is an Argentinian native saxophonist, composer and teacher who demonstrates his superb skills on alto, tenor, and soprano saxes. Feldman utilizes a wide range of Pan-American references, from straight ahead to tango to candombe to samba to mambo. Feldman recorded more than forty albums as a sideman and toured with Argentina’s most prominent artists before receiving the Achievement Scholarship Award from Berklee College of Music. Feldman recorded the album “Tropicana Nights” which received the Latin Grammy Award 2000 for “Best Latin Jazz Album.”

Called “one of the most distinctive guitarists to come along in recent years” by the Village Voice, Dave Stryker has led his own group (with 34 CDs to date), and has been featured as a sideman with Stanley Turrentine, Jack McDuff, and many others. In 2022 Stryker was voted by Downbeat Critics and Readers Polls as one of the top jazz guitarists. Recent gigs have included Birdland, the Blue Note, Dizzy’s Club Coca Cola at Jazz Lincoln Center, the Monterey Jazz Festival, Newport Jazz Festival, Keystone Korner in Baltimore M.D., The Jazz Bakery in Los Angeles, and tours of Europe, Canada, and Japan.