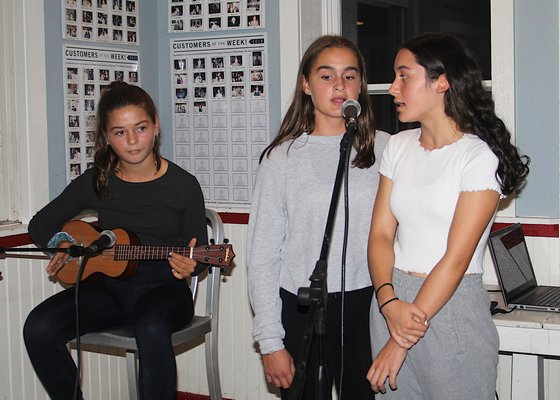 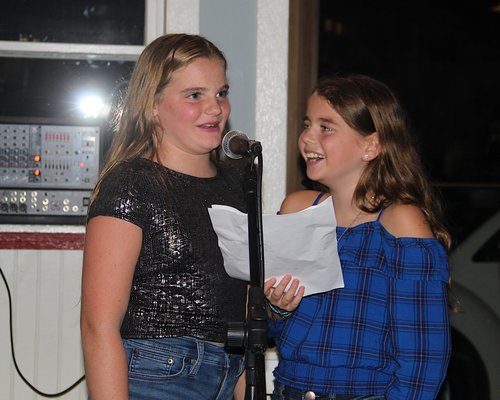 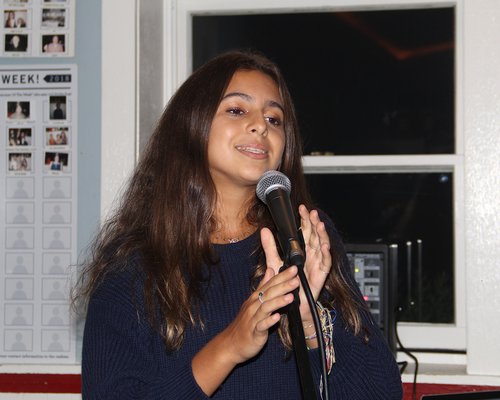 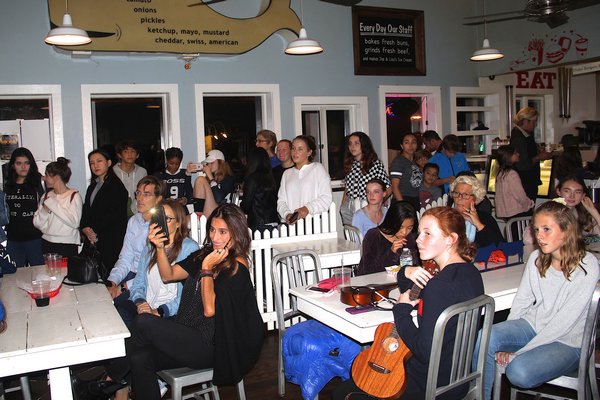 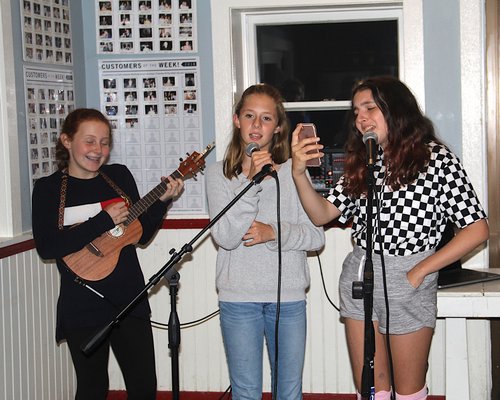 It was Friday night and Bay Burger in Sag Harbor was jam-packed.But this wasn’t the usual crowd seeking out burgers and fries for dinner. Instead, this was Open Mic Night for teens hosted by Southampton Town Youth Bureau.

As tweens and teens came through the door, Peter Strecker, a neighborhood aide with the Youth Bureau, and fellow staff members asked them if they were there to perform.

Many of them were, and as the young singers got their instruments or music in order, parents, grandparents and friends ordered food and nabbed tables with a good view of the stage area in the corner.

Up early in the evening was a duo, Southampton eighth-graders Emily Zukosky and Allison Rischel, who, after a few false starts and some mic adjustments, performed songs on ukulele and guitar, including “A Million Dreams” from the film “The Greatest Showman.”

When they finished, the crowd cheered enthusiastically and the next singer took the stage.

Afterward, Emily and Allison sat down to explain that they have been friends for two years but decided just a few weeks ago to join forces musically for the open mic night.

“We practiced about 30 minutes,” Emily admitted.

“But there’s no judgment,” added Emily, who came to the gig with experience, having already competed in the town’s annual Hamptons Got Talent competition.

Indeed there’s not, explained Mr. Strecker, which is why this is such an important event for teens.

“The purpose is to give local youth an opportunity to perform in front of family, friends and peers,” he said in a recent interview. “They express their abilities and gain public performance experience.”

While most of the participants in the Youth Bureau’s open mic events are Southampton Town residents, Mr. Strecker stresses that no one who wants to perform is turned away. East Hampton and Amagansett kids have also been among the performers in recent years.

“We’re happy to provide outlets for local kids to get out there and perform,” he said. “Sometimes you can’t find venues. That’s where we come in. We find different ways for kids to get involved.”

He explained that these youth open mic nights began back in 2015 at Moe’s restaurant in Hampton Bays. After Moe’s closed its doors, the Youth Bureau then teamed up with Hampton Coffee Company and later, Bay Burger. That has allowed the bureau to offer two locations in different parts of town for the four open mics that are scheduled each year between September and February. Mr. Strecker has found that the bureau’s commitment to the program and the kids is paying off.

“I’ve been with the Youth Bureau over five years now, full time for almost three years, I’ve seen some kids in eighth grade who are graduating now,” Mr. Strecker said. “It’s weird seeing that happen. They’re involved in music and stick with it and grow with it. Even beyond high school.”

If Emily and Allison represent the next generation of Youth Bureau open mic performers, then Sag Harbor’s Harlan Beeton is the elder statesman.

Harlan, an 18-year-old senior at Ross School, competed in Southampton Town’s 2014 Battle of the Bands with his former band Red Tide. They took first place in the competition and Harlan is now working on his own music as a solo performer as he prepares to apply to college at the Clive Davis Institute of Recorded Music at New York University. His open mic offerings at Bay Burger included three original songs on electric guitar.

“I’m really a writer. I love listening to music but I don’t like learning or playing other people’s songs,” he explained after his performance. “I think it’s a great way to learn, but I’m now considering a career and pursuing music full time. Doing covers isn’t going to cut it.

“I want to get this stuff on the stage,” Harlan added. “I love making records.”

Harlan is a prime example of how open mic nights like this boost the confidence, experience and skill level of young performers on the East End. Unlike major metropolitan areas where there might be any number of coffee houses with open mic opportunities, there are not a lot of outlets here for teens who want to share their talents with the public. Southampton Town Youth Bureau is working to provide that outlet.

“This is probably the last time I’ll do one of these,” Harlan admitted. “But up to now, my musical career has been built on Southampton Town events and charity concerts.”

That experience is now going on his college applications as he looks to take his career to the next level. Harlan still recalls the adrenaline rush of his own first public performance and how crucial it was in spurring his desire to pursue music seriously.

“I was hooked on getting stuff I worked on out there,” he said. “The fact they’re doing this is fantastic. A lot of kids have the desire to do it, but a lot them need a medium and platform to do what they do.

“For a lot of these kids I heard parents say it’s their first concert. If you can have a positive experience with it, it’s everything,” he added. “I love that they’re doing this.”

Peter Strecker hopes they can keep doing it, especially now that Liza and Joe Tremblay, the owners of Bay Burger, have announced that they are closing the restaurant in October after 12 years in business.

“Unfortunately, Bay Burger is closing now. This is the last open mic here,” Mr. Strecker said. “We wish the best to the owners, but are now looking for another venue.”

“We like to hold these in fall and winter, so any cafés, restaurants or coffee shops that want to host can reach out to me,” he added. “We have two staff members who will show up to run the events.”

… And a group of young, talented local musicians who are ready to run the world.

The Southampton Youth Bureau’s next Open Mic Night for grades 5 to 12 is Friday, November 2, from 7 to 9 p.m. at Hampton Coffee Company’s Southampton location. Acoustic performers and bands, karaoke, spoken word, poetry and comedic acts are welcome to participate. To reserve a performance time (or suggest a new venue), email pstrecker@southamptontownny.gov or call 631-702-2425.