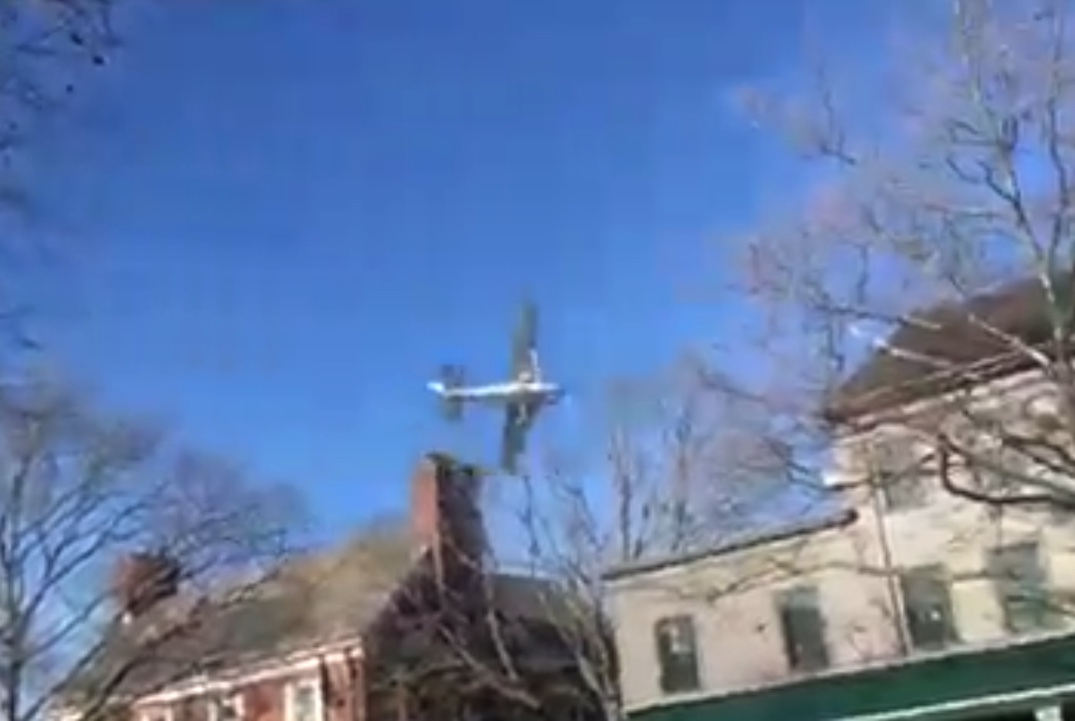 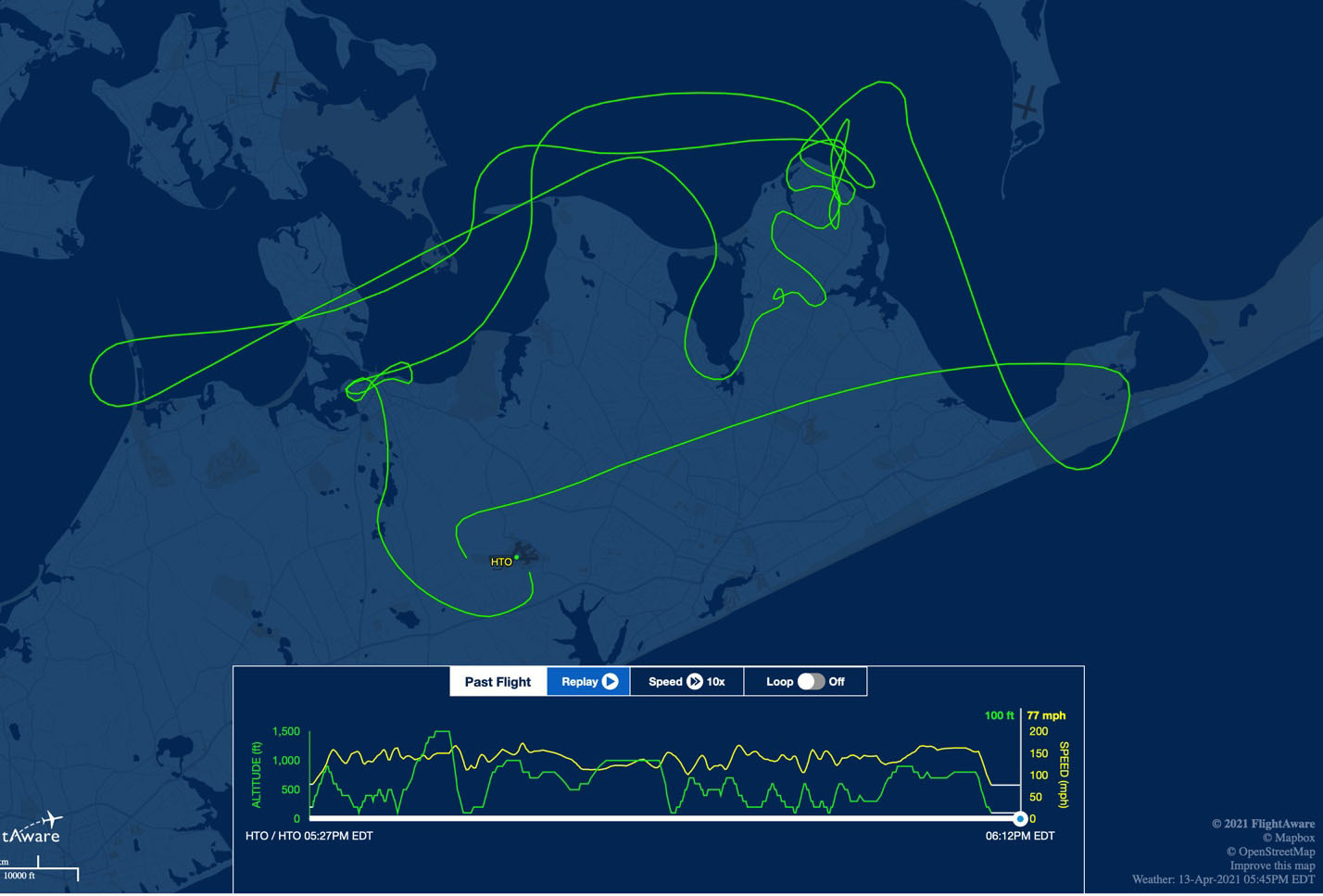 Flightaware.com’s record of the track, altitudes and speeds of David Wisner’s flight in his Cessna 182 over Sag Harbor and Springs on April 13 with altitudes as low as 100 feet.

Peter Boody on Apr 16, 2021
“Sorry. It was dumb,” wrote a local pilot in a text message the day after he had flown his airplane at altitudes as low as 100 feet and sometimes faster... more

A shark attack in the waters off Smith Point County Park in Shirley led to the closure of both that beach and Cupsogue County Park in Westhampton on Sunday, July 3. Suffolk County Executive Steve Bellone, appearing at a press conference at Smith Point on Sunday afternoon, said the lifeguard who was attacked and bitten was in good spirits and doing well. Bellone said the lifeguard, Zack Gallo, was bitten in the chest and hand, the bites requiring stitches. Gallo has been a lifeguard with the county for 10 years. Bellone said there had never been an attack at Smith ... 3 Jul 2022 by Kitty Merrill

Two men were fishing in the Sebonac Inlet in North Sea on July 1 when their kayak overturned. As both men clung to the sides of the vessel, one was able to call Southampton Town Police just before 6 p.m. Patrol units, Southampton Town bay constables, and U.S. Coast Guard personnel responded to the area, along with North Sea, Southold and Southampton fire departments. After an extensive search, police said, the two men were found, pulled aboard a U.S. Coast Guard vessel and brought to safety. One man was medically cleared at the scene, while the other male, suffering hypothermia, ... 2 Jul 2022 by Staff Writer

Southampton DWI Arrests For The Week Of June 30

Michael Lissenden, 43, of North Sea was charged with DWI on June 25. Southampton Town Police reported receiving a call about a car hitting other cars in a Foster Avenue parking lot in Hampton Bays. They located the car on the grass at the Beach Bar nightclub. Witnesses said he drove off the gravel parking area onto the lawn. He displayed all the traits of an operator under the influence of alcohol and performed poorly on roadside sobriety tests, according to police. The DWI count is a misdemeanor. Jhonn Castanedavelin, 23 of East Quogue faces a misdemeanor count of DWI ... 1 Jul 2022 by Staff Writer

Southampton Police Reports For The Week Of June 30

A two-car fender bender on County Road 39 near St. Andrews Road in the Tuckahoe section of Southampton snarled an already heavy holiday commute on Friday, July 1. Southampton Town Police received the call at 2:55 p.m. One car rear-ended another in the westbound lane and one driver was taken to Stony Brook Southampton Hospital via ambulance. The driver’s injury was minor, police said. by Staff Writer

Father Alex Karloutsos, who leads the Dormition of the Virgin Mary Greek Orthodox Church of ... by Michelle Trauring

Q&A: Tom House On Going Past Mere Acceptance To Pride In The LGBTQ+ Community

June was Pride Month, a celebration of the LGBTQ+ community and a declaration of purpose: ... by Joseph P. Shaw

State Assemblyman Fred W. Thiele Jr., who has caucused with Democrats for the past 13 ... by Stephen J. Kotz

Catherine “Katie” Pierro of Riverhead died on June 29 at Acadia Nursing Home in Riverhead, where she had been living since September 2020. She was 94. She was born Caterina Carmela Tripodi on July 19, 1927 in the Bronx, the daughter of Alfonso Rocco Rosario Tripodi and Natalia Carini. She grew up during the Great Depression and World War II. When she was young, the Tripodi family moved all around Manhattan, and she often told stories of her childhood, and the adventures that she and her siblings and cousins had. Eventually, by the time she was 12, the family settled ... by Staff Writer

Wilson R. Plaza, 47, of East Hampton was found dead in a vehicle at the Bridgehampton Commons on Thursday, June 30. His body was transported to the Suffolk County Medical Examiner’s Office to determine the cause of death, but foul play is not suspected, police said. Southampton Town Police were called to the shopping center at approximately 1:19 p.m., asked to check the welfare of a man slumped over the steering wheel of a white van. Police gained entry to the vehicle and determined Plaza had died. Detectives also responded to the scene and preliminary indications are the death was ... by Staff Writer
×