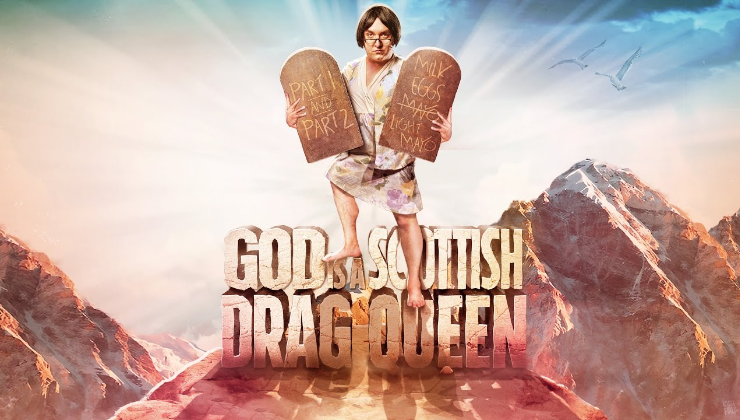 God Is A Scottish Drag Queen

“A CROSS BETWEEN DAME EDNA & BILLY CONNOLLY WITH A DOLLOP OF EDDIE IZZARD!” – Times Colonist

God, dressed in a floral power suite, comes down to skewer everything from Justin Bieber to the Pope in an unforgettable two act comedy of biblical proportions!
A winner of more than 18 ‘Best of the Fest’ awards, God has broken ticket sale records at festivals across the continent with audiences waiting 10 hours in line to get tickets.
Winner of ‘Best of Fest’ an astounding 18 times, critically acclaimed and award winning comedian Mike Delamont brings his hit one man show to theatres around the country.

While God has chosen to present himself to us in order to clear up some misunderstandings and fallacies regarding himself and his role as the Almighty… most of all this show is a way for God to let off some steam about what humans have been doing & not doing and his attempts to remain calm in the face of their actions. Delamont embodies this character with such ease that you actually start to believe his explanations for the many issues he discusses.

“God is a Scottish Drag Queen is one of those shows that will leave you laughing (often very, very loudly) throughout the whole thing…” Christina Pontikis – Vancouver Weekly