In Process @ The Watermill Center - 27 East 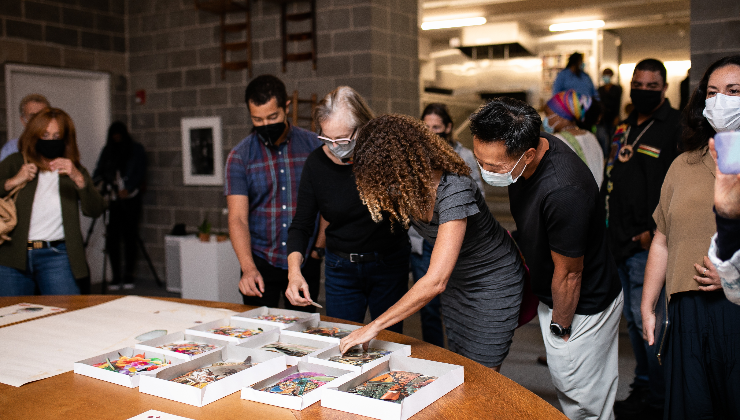 In Process @ The Watermill Center

​The Watermill Center​​, an interdisciplinary laboratory for the arts and humanities located in Water Mill, NY, closes out their 2022 event calendar with their year-round open studio series, In Process, allowing unique insight into the work of The Center’s rotating roster of Artists-in-Residence. The upcoming event will provide East End community members with unique insight into the studios of Kader Attia, Eli Berman, and Netta Yerushalmy.

Kader Attia is an artist who explores the wide-ranging effects of western cultural hegemony and colonialism. Central to his inquiry are the concepts of injury and repair, which he uses to connect diverse bodies of knowledge, including architecture, music, psychoanalysis, medical science, and traditional healing and spiritual beliefs. Throughout his multimedia practice—ranging from sculpture to film installation—reparation does not mark a return to an intact state, but instead makes visible the immaterial scars of psychic injury. This approach is informed by Attia’s experience of growing up between Algeria and the Paris banlieues. Attia’s work has been shown in biennials such as the Shanghai Biennial; Gwangju Biennial; Manifesta, Palermo; Venice Biennial, Venice; and Documenta, Kassel. Notable solo exhibitions include Kader Attia. Remembering the Future, Kunsthaus Zürich, 2020, The Museum of Emotion, The Hayward Gallery, London, 2019; Scars Remind Us that Our Past is Real, Fundacio Joan Miro, Barcelona, 2018; Roots also grow in concrete, MAC VAL, Vitry-sur-Seine, 2018; Repairing the Invisible, SMAK, Ghent, 2017; The Injuries are Here, Musée Cantonal des Beaux Arts, Lausanne, 2015; contre nature, Beirut Art Center, Beirut, 2014; and Continuum of Repair: The Light of Jacob’s Ladder, Whitechapel Gallery, London, 2013. Attia has shown in group exhibitions at venues such as MoMA, New York; Tate Modern, London; and Centre Pompidou, Paris. Attia has been awarded the Marcel Duchamp Prize (2016), the Joan Miró Prize (2016), and the Yanghyun Art Prize (2017). In 2016, Kader Attia founded La Colonie in Paris’s Gare du Nord area as a radically open space for decolonial thinking, debate, and cultural activism. Attia is the appointed curator for the 12th Berlin Biennale in 2022. Attia lives and works in Berlin and Paris. Kader Attia is a recipient of the 2022 Inga Maren Otto Fellowship at The Watermill Center.

Eli Berman is a vocalist, composer, improviser, and new instrument builder from Pittsburgh, Pennsylvania. She creates electroacoustic music using experimental vocal techniques across a variety of her ancestral vocal technologies, namely khazones (Ashkenazi Jewish cantorial music), Yiddish and Appalachian folk songs, Slovak travnice, and western classical techniques. Berman has premiered her music at multiple festivals including (R)evolution: Resonant Bodies at the Banff Centre, New Music On the Point, Yiddish Summer Weimar, New Explorative Oratorio Voice Festival, Atlantic Music Festival, and Gender Unbound. She has sung as countertenor/baritone soloist in the U.S. premiere of John Tavener’s “Total Eclipse,” in a New York Times critically-acclaimed concert of works by Eve Beglarian, and with ensembles such as C4: The Choral Composer/Conductor Collective. She has presented her research at the 2021 International Conference on New Interfaces for Musical Expression, 2020 Pan-American Vocology Association Symposium, and 2019 Transgender Singing Voice Conference. Eli has a B.A. in Music from Princeton University and is currently pursuing an M.A. in Digital Musics at Dartmouth College.

Berman’s residency is part of the YoungArts and The Watermill Center Mentorship Residency. Inaugurated in 2020, each year an alum from YoungArts: The National Foundation for the Advancement of Artists is awarded a residency at The Watermill Center, where they are given the chance to develop their practice at our East End campus.

Netta Yerushalmy is a New York based choreographer, originally from Galilee, Israel. Her work has been recognized through fellowships from the Guggenheim Foundation, Princeton University, Foundation for Contemporary Art, Center for Ballet & Arts, New York City Center, National Dance Project, Bogliasco Foundation, LMCC’s Extended Life, and NYFA. Her work has been presented by Jacob’s Pillow, New York Live Arts, American Dance Festival, Joyce Theater, Alvin Ailey ADT, Guggenheim Museum, Wexner Center for the Arts, Danspace Project, Curtain-Up (Tel Aviv/Jerusalem), HAU Hebbel am Ufer & ICI (Berlin), among many others. In the aftermath of her epic Paramodernities, her latest major work, Yerushalmy became involved in a project at the Bard Graduate Center entitled “What is Research” alongside scientists and historians; she was a Cunningham Research Fellow at the NYPL for the Performing Arts, and has recently been interviewed by queer theorist Jack Halberstam for BOMB Magazine. She has worked with scores of dance students nationally and internationally, and has toured and performed with Pam Tanowitz Dance, Doug Varone and Dancers, Joanna Kotze, Mark Jarecki, and Metropolitan Opera Ballet.

Yerushalmy’s residency is supported through the Maria Bacardi Artist Scholarship, established by a generous gift from local East End artist Maria Pessino, in honor of her late grandmother.

In Process is The Watermill Center’s ongoing series of studio visits that invite the community to gain insight into the creative process of our international Artists-in-Residence, cultivating an understanding of how artists from across the globe develop new work.