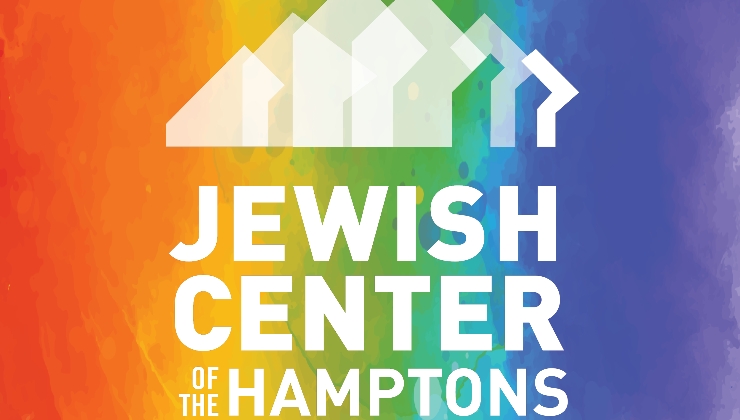 Please join the Jewish Center of the Hamptons as we celebrate our 11th Annual Gay Pride Weekend with guest speakers, Cantor Evan Kent and Rabbi Donald Goor. As a socially conscious congregation, JCOH welcomes each person regardless of gender, sexual orientation, and race, embracing anyone who chooses to join us on our Jewish journey.

SATURDAY, JUNE 27 AT 10:00AM – 11:30AM
Our Shabbat virtual morning service will include guest speakers Cantor Evan Kent and Rabbi Donald Goor. Please visit: https://jcoh.org/community/virtual/ to register for this event.

CANTOR EVAN KENT’S “SHARDS: PUTTING THE PIECES TOGETHER”
Join us for this live virtual performance of Shards: Putting the Pieces Together. From the streets of Jerusalem to the villages of Eastern Europe to the suburbs of Long Island in the 1960s, “Shards” transports you through generations and across continents.

Written by and starring Evan Kent, this one man show celebrates the strength it takes to break apart the things that are holding you back and then to travel as far as it takes to begin to put the pieces together anew to build a better life.

In 2013, Evan made the decision to make Aliyah, moving from Los Angeles to Jerusalem to begin anew. This one-person, touching performance chronicles his story of immigration interwoven with the tale of his grandparents’ arduous journey from Russia to New York in 1908.

This is a story of the continual search for home, homeland, and along the way discovering what you didn’t even know you had lost.

About Cantor Evan Kent
In July 2013, Evan moved from Los Angeles to Jerusalem where he currently lives with his husband Rabbi Donald Goor and their cats Archie and Griffin. Evan received his ordination as a Cantor and his Master’s in Sacred Music from Hebrew Union College in New York and served Temple Isaiah in Los Angeles as its cantor for 25 years. Evan also received his Bachelor’s Degree from the Manhattan School of Music and a Master’s Degree in Public Administration from the City University of New York.

Dr. Cantor Evan Kent received his doctorate in music education from Boston University in May, 2014. His doctoral research examined how music at Jewish summer camps in North America assists in the development of Jewish identity. Evan’s academic interests also include the use of community music as a vehicle for conflict resolution, music and collective memory, and the intersection of spirituality and music. He is currently a lead researcher involved in a project examining the phenomenon of public Kabbalat Shabbat services in Israel.

He is currently on the faculty of Hebrew Union College in Jerusalem where he teaches liturgy and sacred music. His publications have appeared in the Journal of Reform Judaism, Sh’ma Magazine, Conservative Judaism, and the Finnish Journal of Music Education. Additionally, Evan was on of the editorial committtee for the new CCAR Reform High Holiday prayer book, “Mishkan HaNefesh.”

Evan’s one man show “Shards-Putting the Pieces Together” has been presented in Jerusalem, Prague, New York, and California. In the coming year the show, which chronicles Evan’s aliyah to Israel as well as his grandparents’ immigration to the United States from Eastern Europe, will be seen in Chicago, Boca Raton, New Orlean, Southern California, and East Hampton.
Cantor Kent is also one of the co-chairs for the Cantorial and Rabbinic Cabinet of J Street.

About Rabbi Donald Goor
Rabbi Donald Goor, Temple Judea’s Rabbi Emeritus, grew up in San Diego, California, as the son of a rabbi. He graduated from the University of California at Berkeley. In 1987, he was ordained at the Hebrew Union College – Jewish Institute of Religion in New York. Rabbi Goor then joined Temple Judea, where he reinvigorated worship services with new approaches that have brought Jewish traditions to life and have drawn people of all ages to pray and celebrate community together.

During his tenure as Senior Rabbi, Rabbi Goor demonstrated his determination to strengthen the synagogue in two further areas: as a Learning Community and as a Caring Community. For many years, he served on the faculty of Hebrew Union College, in Los Angeles, where he taught second- and fifth-year rabbinic students, addressing topics that relate to the practical aspects of being in the clergy.

Rabbi Goor continued his own studies at the Hartman Institute as a fellow in the Center for Rabbinic Enrichment Program. He co-founded the HOPE Network and the Valley Interfaith Council’s Homeless Project. He chaired the “Jewish Federation/Valley Alliance’s Jewish Community Relations Council,” and co-chaired the Jewish Federation’s “Cults and Missionaries Commission.” Rabbi Goor also served as Chair of the Advisory Committee for the Kalsman Institute on Judaism and Health at Hebrew Union College – Jewish Institute of Religion, Los Angeles.

After serving Temple Judea for 26 years, Rabbi Goor now lives in Jerusalem, having made aliyah in June 2013. He is working part time for ARZA World Travel, the Reform Movement’s travel department, planning trips to Israel for rabbis and synagogues. In Israel Don serves on the boards of the Israel Religious Action Center of the Reform movement, Shutaf, a program for special needs kids, and the David Forman Foundation.

Rabbi Goor is married to Cantor Evan Kent, his life partner of over 30 years.

JEWISH CENTER OF THE HAMPTONS: WHO WE ARE
Jewish Center of the Hamptons is a post-denominational synagogue serving as the Jewish spiritual and cultural oasis on the East End of Long Island, in Manhattan, and beyond. Rooted in Torah, prayer, and acts of loving kindness, the Jewish Center of the Hamptons shares the joy of Jewish traditions and deepens our connections to a rich heritage through Jewish values and a diversity of Jewish voices. In our many avenues of learning, we seek to bring relevance and meaning to our daily lives. We are a center without walls, connected to Israel and the Jewish people wherever they might dwell. We welcome each person regardless of gender, sexual orientation, and race, embracing anyone who chooses to join us on our Jewish journey. As a socially conscious congregation, we dedicate ourselves to mitzvot, fulfilling our obligations to God, and to one another.