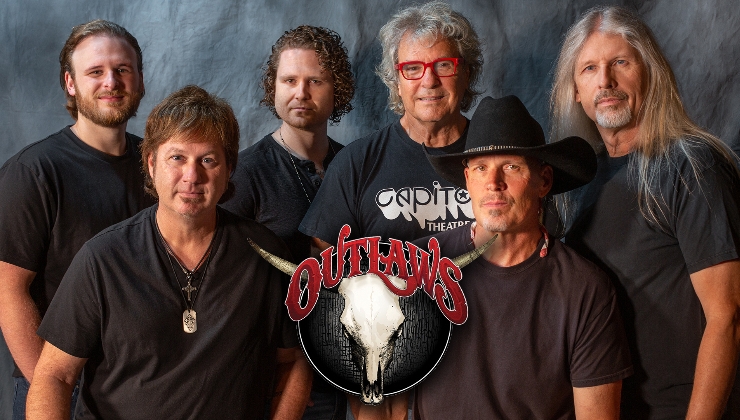 For The Outlaws, it’s always been about the music. For more than 40 years, the Southern Rock legends have celebrated triumphs and endured tragedies to remain one of the most influential and best-loved bands of the genre. Today, The Outlaws have returned with new music, new focus and an uncompromising new mission: It’s about a band of brothers bound together by history, harmony and the road. It’s about a group that respects its own legacy while refusing to be defined by its past. But most of all, it’s about pride.

It’s About Pride was also the title of the band’s acclaimed 2012 album, universally hailed as their victorious comeback. History lesson: Formed in Tampa in 1972, The Outlaws – known for their triple-guitar rock attack and three-part country harmonies – became one of the first acts signed by Clive Davis to Arista Records. The band’s first three albums The Outlaws, Lady In Waiting and Hurry Sundown would become worldwide gold and platinum landmarks of the Southern Rock era. With the tragic deaths of co-founding members Frank O’Keefe and Billy Jones in 1995, and songwriter/vocalist/lead guitarist Hughie Thomasson in 2007, it was feared that The Outlaws’ trail had come to an end.

Keyboardist/vocalist Dave Robbins is a co-founding member of Blackhawk, and has written hit songs for artists that include Kenny Rogers and Eric Clapton. Longtime Outlaws’ bassist/vocalist Randy Threet has performed with Trisha Yearwood, Pam Tillis and Blackhawk. Lead guitarist Steve ‘Grits’ Grisham was a member of the Soldiers Of Fortune era Outlaws, as well as a noted songwriter. Co-lead guitarist Dale Oliver is one of Nashville’s most versatile producers/songwriters/musicians and was formerly Blackhawk’s lead guitarist and bandleader for more than 10 years.

On that stage, the band burns hotter than ever. The Outlaws’ live shows –vividly captured in their 2016 double album Legacy Live – are blazing 2+ hour tributes to the band’s rich history and fiery rebirth. Classic tracks and fan favorites from the first three albums – as well as The Henry Paul Band’s definitive ‘Grey Ghost’ – share the spotlight with new songs that are already being embraced by audiences.

For The Outlaws, it’s still about the music. And now more than ever, it’s about pride.