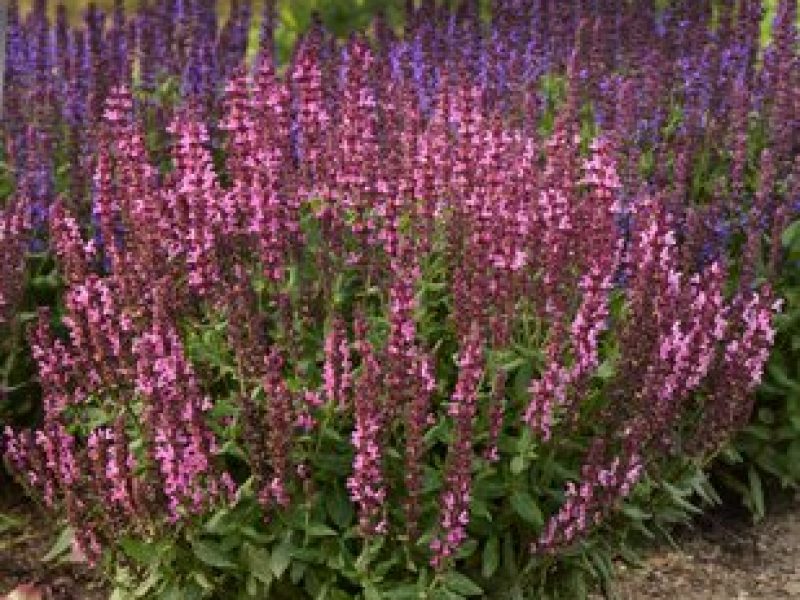 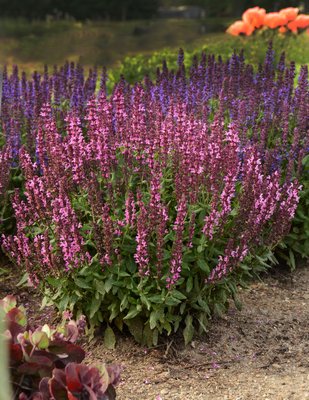 Salvia ‘New Dimension Rose’ is a perennial Salvia that you can grow from seed. At around 15 cents a seed (Harris and Park Seed) it’s much more economical that potted Salvias and it may flower the first year from a spring sowing. Plants are about 10 inches tall and compact. COURTESY THE NATIONAL GARDEN BUREAU 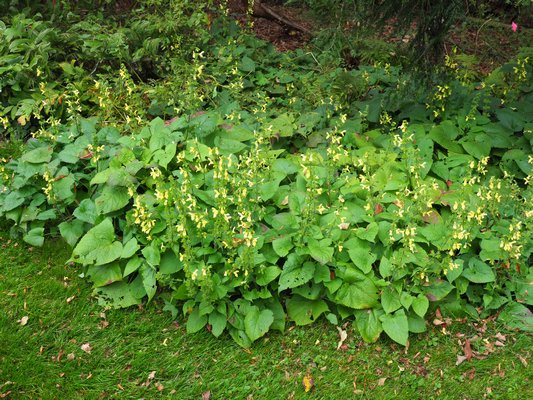 Salvia koyamae or Japanese Yellow Sage is unusual in both its color and habit. It flowers very late in the summer and prefers a somewhat shady woodland setting out of direct sunlight. It’s a spreader but not at all invasive or intrusive and very deer resistant. ANDREW MESSINGER OLYMPUS DIGITAL CAMERA

In February I offered some pointers and advice on two candidates for your vegetable garden. We started with peas, one of our earliest veggie and a cool-season favorite, whose vines and slinky tendrils can reach for the sky. Then we moved to onions, which often take up to two years to mature and need a cool start then a hot finish. This week we turn to a flower that has both ornamental and culinary roots and has both annual and perennial family members that have roots in places as diverse as Mexico, Japan and Eurasia. This week, we explore salvias.

Although its name is derived from the Latin salvere, meaning to heal or good health, this moniker undoubtedly refers to the common herb sage (Salvia officinalis) and not the ornamental salvias we find flowering in our gardens. All salvia are in the mint family Lamiacea (note their square stems) and are cousins to landscape favorites such as Nepeta (catmint) and Monarda (beebalm). Indeed, many salvia species reveal their history through the minty fragrance contained in their leaves. There are more than a thousand species in the genus; however, most are not hardy in northern gardens and this week we’ll focus only on the hardy types.

Much of the early work in hardy salvia breeding was done by the German plantsman Ernst Pagels, who is credited with breeding varieties “Blauhugel” (Blue Hill) and “Schneehugel” (Snow Hill) shortly after the Second World War. Both of these are still in commercial cultivation and are found in garden centers during the spring and summer.

Today, there are several hundred varieties of hardy garden salvias that we can choose from and growers offer up to 70 different varieties. Likely the most common and well-known cultivar, also a product of innovative German breeding is “Mainacht” (MayNight), which was named Perennial Plant of the Year by the Perennial Plant Association in 1997. May Night remains a favorite among landscapers for its abundance of indigo blue flowers as well as its pest and disease resistance. Other standards include the upright, dark-stemmed variety “Caradonna” and the dark purple cultivar “Ostfriesland” (East Friesland). These tried-and-true classics are being replaced slowly with exciting new varieties from flower breeders in the United States and Europe.

Award-winning cultivars such as “Blue Marvel” and “Rose Marvel” present extra-large flowers and provide a much longer flowering window. Newcomer “April Night” is earlier to flower, as the name suggests, and is especially popular with southern gardeners, so up here it would be considered “tender.” “New Dimension,” “Bordeau,” “Salute” and “Swifty” are all new introductions that are bred for improved garden performance. Of interest to the category, breeders are hybridizing S. nemorosa and S. pratensis to provide plants with more open and airier flower presentation. Examples include the Fashionista series and salvia “Blue by You.”

English botanist George Bentham did the first extensive documentation of this genus in 1836. Bentham was aware of one fascinating characteristic of salvia flowers in that they contain a trigger mechanism that deposits pollen on the back side of visiting bees. This pollen then becomes transferred to female salvia flowers that share the same receptive flower parts encouraging pollination among the same or similar species. The beautiful salvia we find in our modern gardens originates from plants found in the wooded elevations of Eurasia. The most common hardy species are S. nemorosa and S. pratensis and the many hybrids derived such as S. x sylvestris and S. x superbum.

Today, we typically refer to the entire class of these hybrids as S. nemorosa (nemorosa from the Latin “of woods”) for simplicity and the reason why we commonly refer to these hardy plants as Woodland Sage. Interestingly, all plants with the common name of sage are salvia, but we reserve the true genus name for ornamental rather than culinary species. The age you keep in your kitchen is actually salvia, too, and it can also be winter hardy in the north; however, they have lesser ornamental value.

Hardy salvia like S. nemorosa are considered to be carefree and easy to manage in the garden. They can be in place for years without a need for dividing. They are also a favorite of pollinators like bees and hummingbirds. As a member of the mint family, their leaves are not on the preferred forage list of deer and rabbits and considered to be a great garden addition where these creatures are a nuisance. Be sure to plant in a location where they will receive at least one-half day of direct sunlight, as this will provide an environment that encourages the highest degree of flowering. Salvia prefers soils rich in organic matter, so it may be necessary to add compost, peat moss or topsoil to your sandy or heavy clay soil before planting. Once established in the garden, salvia is quite drought tolerant and require watering only when other landscape shrubs such as hydrangea show signs of wilting. To maintain healthy green growth, plan on fertilizing your salvia plants when they emerge from dormancy in the spring and once again in early summer. Applying a balanced fertilizer such as 15-15-15 according to label directions will do the trick.

Many gardeners experience only one spring flowering display from salvia because they are unaware that these garden beauties can be encouraged to rebloom several times during the summer and well into fall. Once the first flush of flowers has finished and the flower stems have turned brown, cut the plants back aggressively to about one-third their original size. Doing this causes the salvia plants to push up new shoots from the root system, and you will be rewarded with a new flush of flowers in four to six weeks. Repeat this process, and it’s possible you may see as many as three or more full cycles of flowering in a single season. However, this repeated regeneration of the plants requires a great deal of the plant’s “energy” reserves so to make sure the plants have enough reserves to make it through the winter don’t cut the plant back after mid-August. This ensures that the later emerging foliage will create the carbohydrates that the plant needs in the crown and roots to be hardy. Remove all salvia foliage after it turns brown in the fall to promote healthy new growth the following spring.

My favorite salvia is Salvia Koyamae. I bought this late-blooming yellow salvia from Plant Delights Nursery several years ago and gave the small plant a home in a shady garden area that gets only late afternoon sun. The first year I was unimpressed but the second year the plant grew over 2 feet tall only to be knocked down by a branch that fell from above. The Japanese Yellow Sage not only survived the accident but as it laid prostrate on the moist woodsy soil it rooted at each internode (or stem joint). As a result, the following year the plant covered a space more than 6 feet square where it’s now a wonderful specimen among the Astilbes and dwarf variegated false Solomon’s Seal. It flowers well into the early fall and seems to be deer resistant. Keep growing.