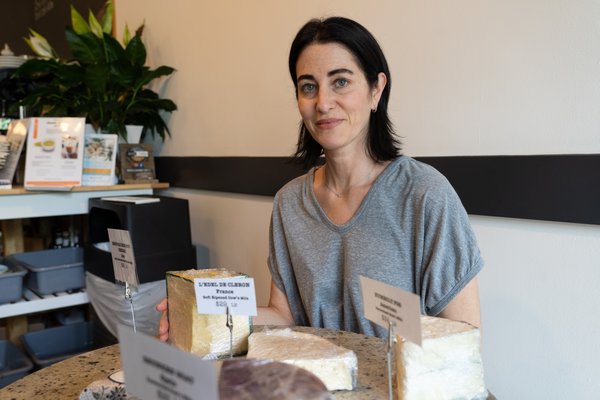 The keys for the Village Gourmet Cheese Shoppe, which has long been considered a local “institution,” are now in the hands of Nikki Cascone-Grossman, who took over the shop on March 1. With the new ownership comes some changes, including a new name— Cheese Shoppe—but Ms. Cascone-Grossman said she is committed to keeping the classics.Though it’s called Cheese Shoppe, this is a store that sells more than just cheese. Customers can grab themselves anything from a cup of cold brew coffee on tap to a fresh sandwich made to order. Because this shop has been on Main Street in Southampton Village for decades, regulars still stop by for their favorites, including the Lee Spa, a breakfast sandwich curated by the shop’s former owners, Danni and John Grech.

“I think the Cheese Shoppe is an institution and it’s really been here since 1974,” Ms. Cascone-Grossman said, adding that, “we kept the favorites, especially for the regulars who love and know the sandwiches by name. I kept that intact because I thought that was an important thing to preserve.”

But now, when customers look at the menu they will find brand new sandwich offerings, salads, soups and other casual dining items, all created by Ms. Cascone-Grossman who specializes in using fresh, healthy ingredients. New items include a salad station with farro, quinoa, shrimp, salmon and pumpkin seeds and the newest craze, açaí bowls.

Born in Brooklyn and raised in Staten Island and Manhattan, Ms. Cascone-Grossman grew up with a strong Jewish and Italian family background. She began her career in food service at the age of 14 when she worked at a pork store where she sliced meats and served customers. Ms. Cascone-Grossman attended the School of Culinary Arts in Atlanta, Georgia, and experienced a successful career as a chef afterward. Her talents were showcased on television when she competed in season four of Bravo’s “Top Chef” and she even had the chance to cook on behalf of one of New York’s favorite teams as the Yankee Stadium’s director of food and beverage.

Ms. Cascone-Grossman decided to take a hiatus from her cooking career in order to start a family with her husband, Brad Grossman, moving across the bridge to the quieter suburbs of Lloyd Harbor on Long Island’s North Shore in 2014. But she always had an eye for the South Fork as she has been summering here since she was a teenager.

The eventual move here made sense. The family already had roots in Southampton, as Mr. Grossman’s sister, Erica Grossman, works in the village and the couple owned a small home in Southampton. The family eventually moved permanently to Sag Harbor in 2019 where Ms. Cascone-Grossman delved into the world of food once again.

She admits that she did have reservations about the food scene in Southampton, however, especially when it comes to casual dining.

“Honestly I think it is improving but it’s still not great,” Ms. Cascone-Grossman said. “It’s so challenging because of the seasonality and costs involved to own and operate a business here. I think fast and casual is what’s missing most.”

She notes that changes in ownership, as well as the look of the store and new food items did initially elicit some customer skepticism at Cheese Shoppe.

“There was some ‘hesitation,’ but [customers were] mostly welcoming and supportive,” Ms. Cascone-Grossman said, noting there was lots of input and opinions offered. “The changes are ongoing and evolving as I live in the space. It’s all to improve the speed of service and customer experience.”

In addition to offering new products made in New York State, Ms. Cascone-Grossman is also attempting to order products packed in environmentally friendly packaging, limiting the use of plastic.

“I have a large selection of imports as well but I like to carry local because it’s fresh, more sustainable and there are very cool products coming out of New York—small artisanal items,” she said. “Also many tourist love to purchase New York products.”

And though it sells a range of products, Cheese Shoppe’s namesake is well represented. During a recent visit, Ms. Cascone-Grossman laid out her four of her favorites on a table: Kerrygold Irish Stout Cheddar, L’edel De Cleron, Humboldt Fog and Drunken Goat.

“I enjoy strong cheese of all texture but prefer sheep’s and then goat’s milk over cow’s,” she said. “These are just a few of my favorites at the shop, but it is such a huge subject, that I couldn’t carry all that I love.”