Mary Woltz Is Dedicated To Putting The Bees’ Needs First 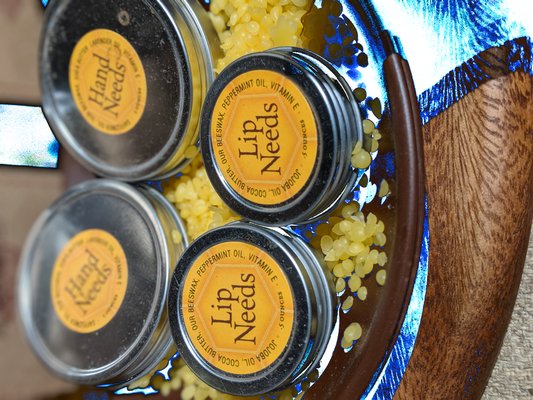 Hands Needs and Lip Needs for sale at Marders. 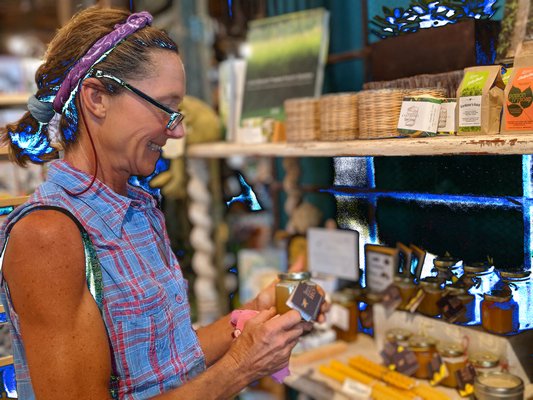 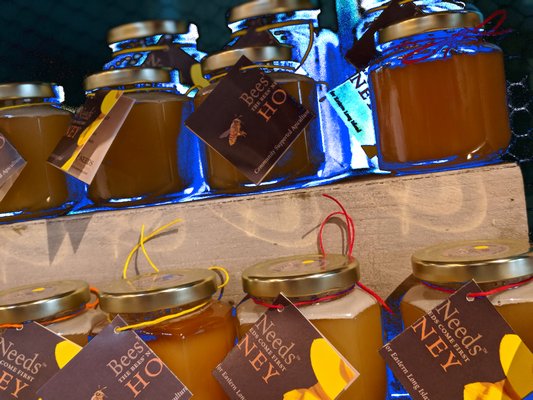 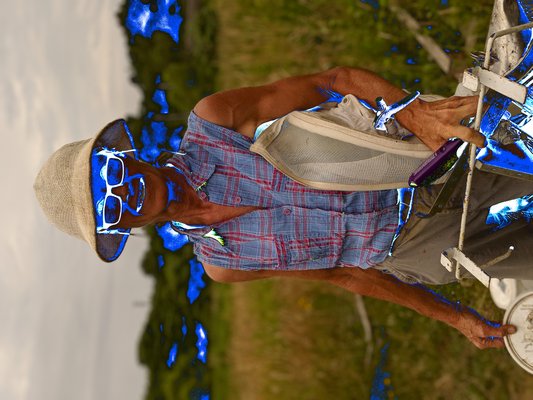 Mary Woltz ready with her tools to go check on the hives at Marders in Bridgehampton. 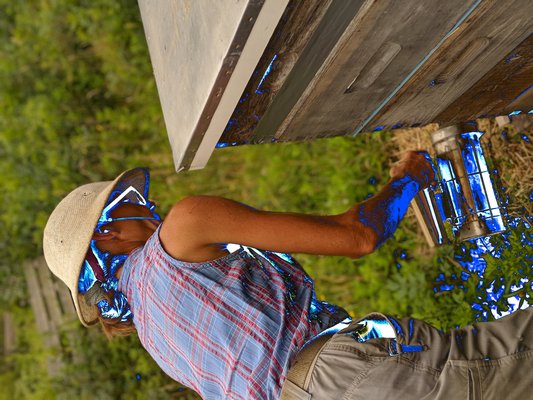 Mary Woltz alerting the bees that she is about to check the supers. 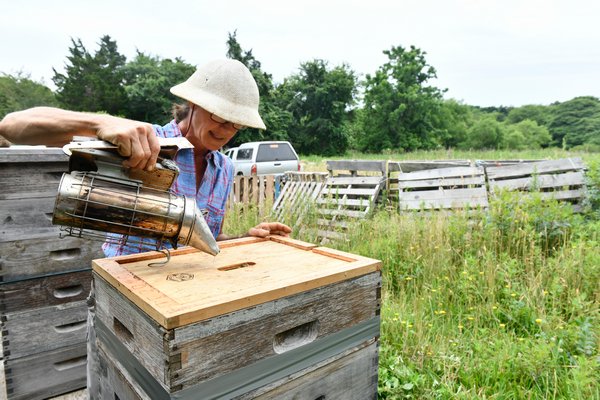 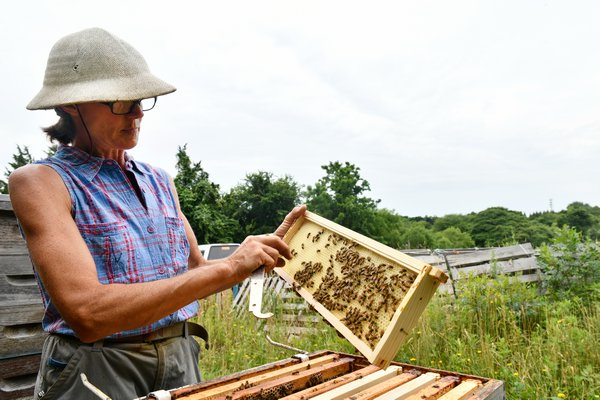 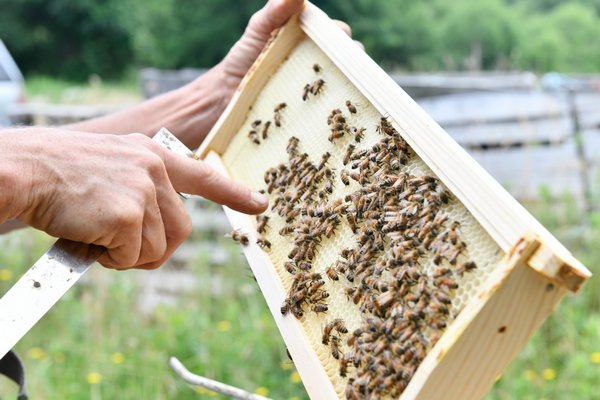 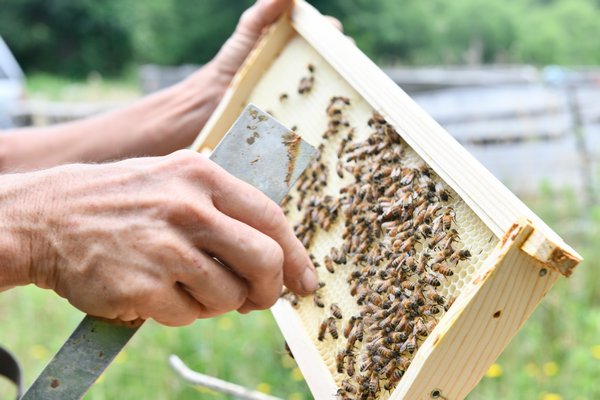 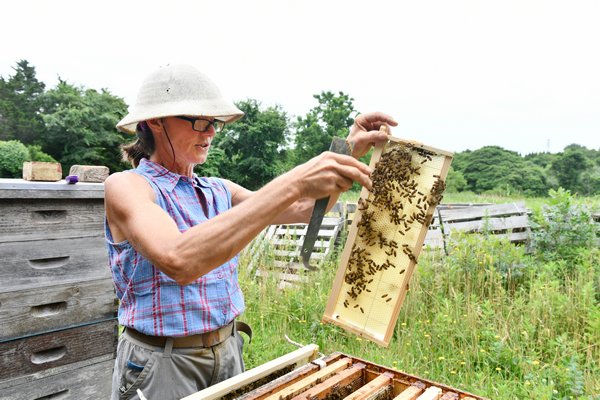 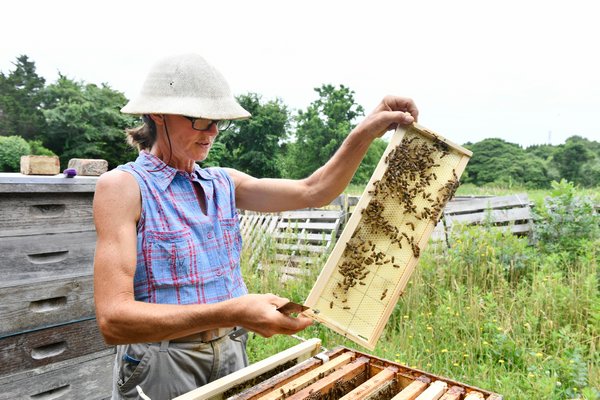 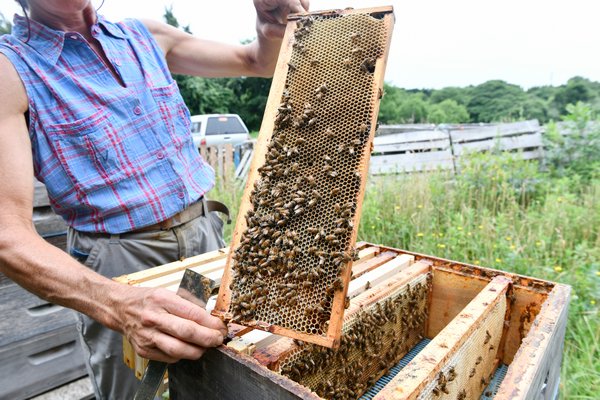 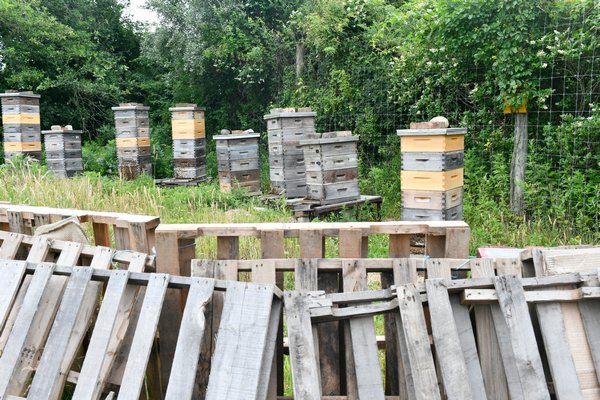 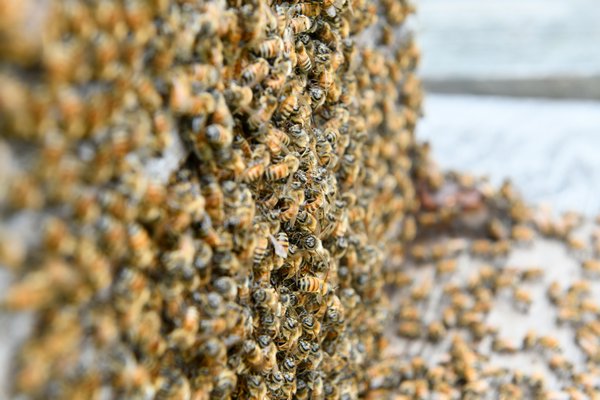 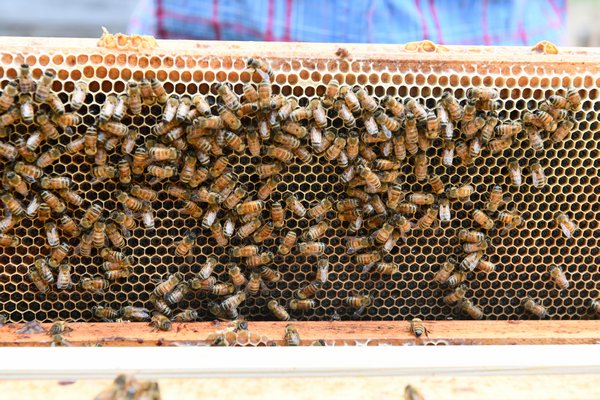 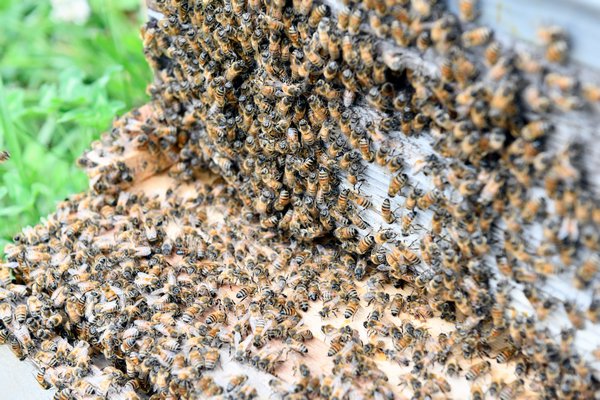 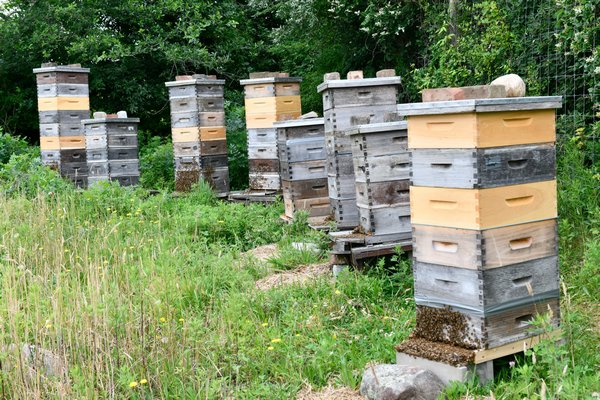 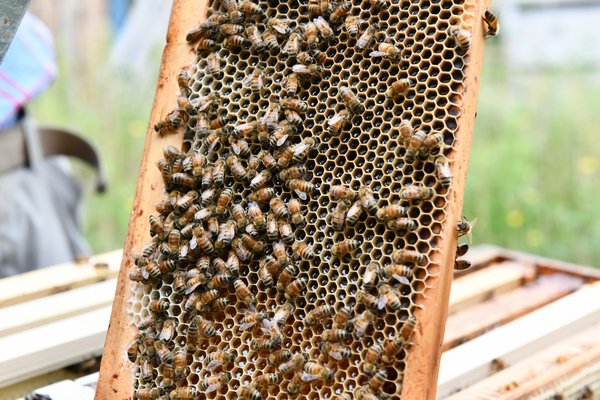 Mary Woltz, founder of Bee’s Needs, is ready for work. Her uniform is her boots, a flannel vest, cargo pants and a straw hat. Her office is one of the 13 fields of beehives she manages, and her coworkers are honeybees. She calls them “the girls.”

On July 8, Ms. Woltz was checking on her hives at Marders, a garden center in Bridgehampton. Among her tools are a device that creates smoke to alert the bees that she is coming and a journal where she documents the time, temperature and weather conditions.

Ms. Woltz then takes off her watch; she is now on their time.

Her daily obligations include inspecting the honey supers: the shelves within the hives that bees use to store their honey. As she pulls each one out, she encourages the bees.

“Hey baby, you’re doing a great job,” she said, as she checked the supers.

Ms. Woltz does operate differently from others in the beekeeping field. She avoids wearing protective gear, unless necessary, because her own vulnerability makes her more aware of theirs as she inspects the frames.

“When I was here before, I had to replace some of these foundation frames,” Ms. Woltz said. “It takes a tremendous amount of energy to make wax. It’s about eight pounds of honey to make a pound of wax. So some beekeepers give them the foundation, a plastic foundation, that [the bees] just have to fill. But I believe that it’s very important for them to build the wax.”

The wax is used to make the honeycombs where honey is stored by the bees, who make the honey out of nectar they collect from flowers. Once a super is filled to the brim with honey, it is removed and replaced with an empty one. In order to get the bees off the filled super, Ms. Woltz uses an escape board, or a “one-way door.” Another slower process that others in the field wouldn’t usually choose.

“I choose the escape board,” Ms. Woltz said. “It’s slower, but nicer. Most of my choices are slower, but what I feel like is nicer for the bees. My business is called Bees’ Needs for a reason. The bees’ needs come first.”

Ms. Woltz harvests only excess honey from the hives to make sure that the remaining honey will meet the bees’ needs. The needs include having enough honey to last the winter, as the bees consume honey for energy as they generate heat by flapping their wings.

She carries three types of honey, which are divided by seasons. Early Harvest, also called Marvelous May, is primarily composed of the nectar from the black locust tree, appearing lighter in color and having a more delicate flavor. The Middle Harvest, also called Juicy July, is composed of nectar from privet, sunflower and linden, among other plants. The Late Harvest, or Fabulous Fall, is often composed of goldenrod, Japanese knotweed, some asters and occasionally buckwheat, creating a darker, more flavorful honey.

“If you have bad allergies, you buy the spring honey,” Ms. Woltz said, noting that the pollen one is allergic to may be in the honey, perhaps enhancing immunity.

The wax does not go to waste either. Her husband, Rob Calvert, uses it as a base ingredient in the Bees’ Needs hand salve, called Hand Needs, and lip balm, called Lip Needs. She asked her husband to use only ingredients that she could both spell and say, an instruction that he followed. There is also a wood polish called Wood Needs in the works.

On her website, she wrote that she sells honey to support her bee habit.

Ms. Woltz’s love affair with bees began in the early 2000s. She was working in Rockland County at the Pfeiffer Center, which dedicates itself to teaching, practicing and promoting biodynamics, an alternative form of agriculture. The co-founder, Gunther Hauk, had written a book in 2002 called “Toward Saving the Honeybee,” which had offered a new approach to confront the honeybee crisis. By then, according to Ms. Woltz, half of the honeybee population was lost due to the introduction of varroa mites, a major pest to honeybees.

Before then, honeybees were not exactly on Ms. Woltz’s radar.

“It was reading and listening to him speak about the bees and beginning to work with bees at the Pfeiffer Center—that was the beginning of it for me,” Ms. Woltz said. “I just decided that I would devote my energy to their well-being.”

Mr. Hauk’s book was written four years before the identification of colony collapse disorder, a phenomenon defined by a dead colony with no adult bees and no dead bee bodies, but with a live queen, honey and immature bees present.

Colony collapse disorder was identified around the time Ms. Woltz had started Bees’ Needs after leaving with her position at the Hamptons Honey Company, the gig that had brought her to the South Fork.

Since then, according to Ms. Woltz, one-third of the honeybee population is lost every year. This year alone, the University of Maryland’s nonprofit Bee Informed Partnership reported that beekeepers across the U.S. lost 40.7 percent of their honeybee colonies from April 2018 to April 2019.

This is devastating when considering their importance in the ecosystem. “I want people to be grateful that they pollinate one-in-three bites of food that we all eat,” Ms. Woltz said

“If we care for [honeybees], we’re caring for all their other buddies, the insects, the birds, all the critters that we share the environment with,” Ms. Woltz said. “And it’s just breaking my heart that we could be responsible for their disappearance. Because we are. If they disappear, it’s on us.”

According to the U.S. Department of Agriculture, research has pointed to parasites and pests, pathogens, poor nutrition and substantial exposure to pesticides as the root of the honeybees’ decline. Just recently, the Environmental Protection Agency dropped restrictions on the pesticide sulfoxaflor, which research has shown could be lethal to honeybees. And with the USDA’s National Agricultural Statistics Service recent suspension of the honeybee colony survey for the month of July, it may be more difficult to track the ramifications.

“I’m horrified that this administration has shown an utter disregard for the current crisis the honeybees are facing,” Ms. Woltz said. “By suspending the honeybee survey and, more recently, approving bee-killing pesticides they are exacerbating an already desperate situation.”

When asked what the public could do to help honeybees, Ms. Woltz said: “Not always just putting ourselves first. If we could learn that simple rule, then the world would be so much better and happier and I could sleep better. Because right now, it’s painful.”

“Just be aware of how you use your energy, how much energy you use,” Ms. Woltz said. “How much stuff you buy. How big your space is, whether you’re planting grass, which is a food desert for bees, or planting flowers. Whether you’re mowing your lawn of spraying it to get all of those ‘pesky’ dandelions out. Dandelions are food for bees.”

Ms. Woltz also said supporting people, companies and nonprofits dedicated to “doing the right thing” could also help. But mostly, she wants people to be more mindful of their choices before it’s too late.

“We’re running out of time,” Ms. Woltz said. “Time is of the essence.”

In January I choose to eat what I call “lean, clean and green” food … ... by Janeen Sarlin

Festive, but uncomplicated dishes make holiday dinners easy for the cook as well as the ... 19 Dec 2019 by Janeen Sarlin
Sign in to comment