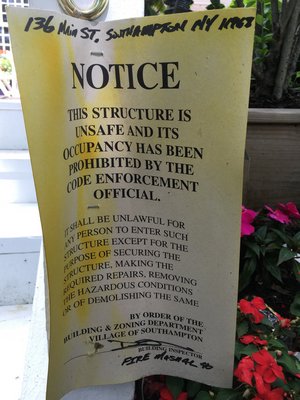 The notice in front of Blu Mar Hamptons read, “The structure is unsafe and its occupancy has been prohibited by the code enforcement official. It shall be unlawful for any person to enter such structure except for the purpose of securing the structure, making the required repairs, removing the hazardous conditions or of demolishing the same.” It was signed by Village Fire Marshall Dean McNamara.

The owner of Blue Mar Hamptons, Zach Erdem, has continued to operate the business. He did not respond to questions seeking comment this week.

Mr. Erdem took over the building this year, Mr. McNamara said, and when he went to conduct a fire inspection just before the Memorial Day weekend, he found all of the fire protection systems—the sprinkler system, fire alarm, kitchen system and extinguishers—were inoperable.

Mr. McNamara said it is common to see one of the systems malfunction for one reason or another during an inspection. That day, multiple systems failed, and as a result, it met the definition of an “unsafe structure.”

“The occupancy is required to have those systems in place for the protection of those occupants,” he said. “We issued the unsafe poster because we felt it was necessary.”

He added that numerous violations were issued as well as a ticket to appear in Southampton Village Justice Court on June 25.

As a result of the poster and violations, Mr. Erdem has worked toward fixing all of the issues, according to Mr. McNamara. The sprinkler system, fire alarm system and the kitchen are good to go, he said, and now all he is waiting for is final paperwork from the contractor who made the repairs.

Mr. McNamara said the structure is safe at this point, and that the signs had been put in place to pressure Mr. Erdem to correct the issues.

Mr. Erdem has since asked to remove the poster from the premises, but Mr. McNamara said it was better to just leave it in place until everything has been resolved.

Typically, when violations are issued, he said, the goal is to educate the business owner as to why they were being cited, along with how and why they need to fix the issues.

“He’s trying to do the right thing,” Mr. McNamara said. “It’s much better than it was. I just wish it never came down to writing tickets. Something like that, you do it to put the full force behind it.

Festive, but uncomplicated dishes make holiday dinners easy for the cook as well as the ... 19 Dec 2019 by Janeen Sarlin
Sign in to comment