Coche Comedor Will Open Its Doors In Amagansett In May 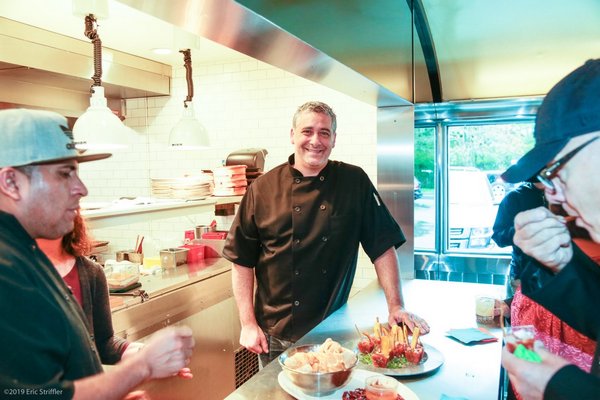 If you’ve been around the East End for more than 20 years, you likely recall the old Honest Diner in Amagansett. The comfort-food eatery on Route 27 was housed in a vintage-style diner. The diner closed a long time ago and for 19 years the building served as the headquarters of Art of Eating, the catering company run by husband and wife team Cheryl Stair and John Kowalenko.In 2017, Art of Eating moved to a new location on Butter Lane in Bridgehampton and in the two years since, the diner has undergone extensive renovations. On May 15, the space opened its doors to the public once again, this time as a Mexican restaurant called Coche Comedor.

The culinary team behind Coche Comedor is the Honest Man restaurant group, which owns Nick & Toni’s, Townline BBQ, Rowdy Hall, Honest Catering and La Fondita (located right next door to the new restaurant). Coche Comedor is being billed as a year-round restaurant featuring regional Mexican cuisine inspired by locally sourced ingredients. The centerpiece will be a wood burning grill and rotisserie that will produce roasted chickens, meats and seafood seasoned with the flavors of Mexico, all paired with house-made tortillas. Look for seafood to have a starring role in several dishes.

“Coche may not be on the water, but we are less than a mile away and we wanted to capture that summer seafood style with raw bar items, ceviches and seafood cocktails,” explained executive chef Joseph Realmuto in a recent email. “When we traveled to Veracruz during our field research in planning the restaurant, we gathered a lot of inspiration for our seafood dishes on the menu.”

To that end, the raw bar section of the menu (with price points in the $12 to $18 range) will feature local littleneck clams and oysters on the half shell, seafood cocktail with clams, shrimp, calamari and octopus and a selection of ceviches such as ceviche verde with fluke, clam, roasted jalapeno, lime and salsa verde.

Main dishes at Coche Comedor will be in the $18 to $32 range with rotisserie meats taking center stage. Among the offerings will be chicken adobo served with choice of mole roja, mole negro, salsa chipotle or salsa verde and apricot-tamarind glazed duck served with pipian rojo and tortillas.

Also, from the wood grill look for rib steak with poblano peppers, pork rib carnitas with charred baby onions, cod al pastor with grilled pineapple, pickled cabbage and avocado crema and arroz a la tumbada, Mexican rice, seafood and chorizo in a casuela. Sides such as “Chino Latino” duck fried rice, pinto beans with pork belly and chorizo, shishito peppers with chili lime salt and, of course, hand pressed tortillas will round out the menu.

“I really enjoy cooking on the wood fire, so I collaborated with J&R Manufacturing Co., who designed our smokers at Townline BBQ, to build a wood-fired grill and rotisserie for Coche,” noted Chef Realmuto. “This system is the centerpiece of our kitchen and I use it to cook all our meats and poultry as well as a few fish dishes.”

“I am really excited to cook on wood fire,” he added. “We have been working on our mole sauces at La Fondita over the years and wanted to really focus on them and showcase a few on Coche's menu.”

In terms of décor, Cass Calder Smith Architecture, the design team behind Nick & Toni’s and Townline BBQ, reimagined the diner space for the new restaurant. Designers made an effort to preserve much of the classic diner exterior and several original elements inside—such as the rounded ceiling, stainless steel detailing, and light fixtures—but at the same time infused the space with brighter colors and a livelier tone to create an atmosphere that supports the Mexican cuisine menu.

The space is contemporary in style with geometric tile floors, dark blue booths, wood topped tables and a steel bar. Most notably, the architects opened up the wall facing La Fondita to create a clear architectural relationship between the two spaces. In warmer months, the glass doors retract to create an open feel as well as connect to the outdoor seating area between the two buildings.

In addition, Host18, a graffiti artist from Brooklyn, was commissioned to paint an interior wall mural while seven East End artists designed custom table tops to add new life to the space and keep things local and handmade.

What’s a Mexican-inspired restaurant without a bar? At Coche Comedor expect a large selection of tequilas and mezcals with an emphasis on margaritas (on the rocks or frozen), including the prickly pear margarita, the tamarind margarita, Mezcal Negroni and La Raquel made with tequila, caramelized pineapple, toasted coconut, coconut milk and lime. Beer choices on tap and in cans highlight Mexican favorites and local craft brews. Wines will include sangria on tap, rotating with the seasons—red, white or rosé.

Coche Comedor will be serve dinner Wednesday through Sunday, while the bar will be open at 11:30 a.m. Brunch will be served on weekends. Coche Comedor (cochecomedor.com) is at 74 A Montauk Highway in Amagansett, adjacent to La Fondita. For information call 631-267-5709.