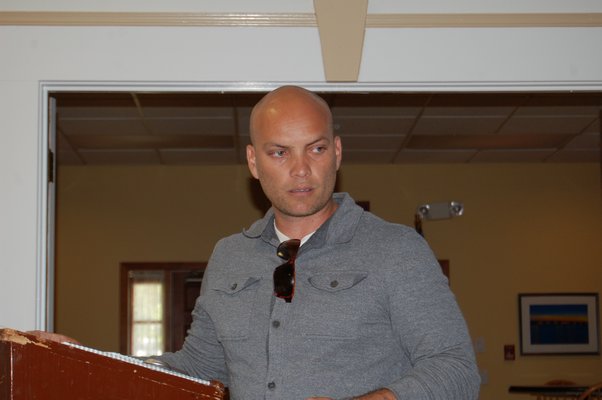 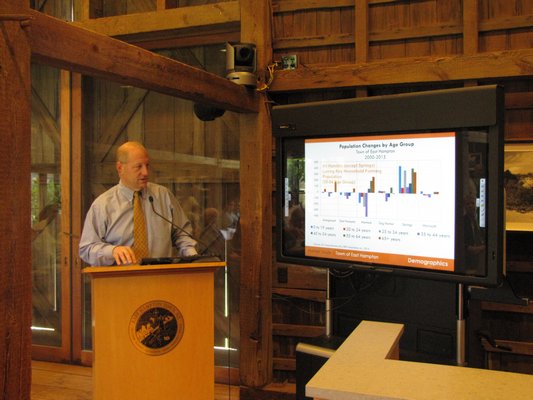 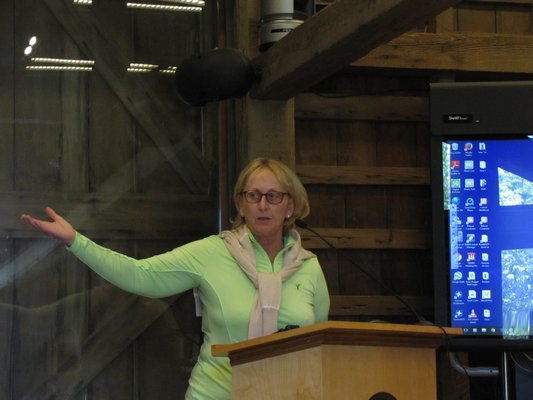 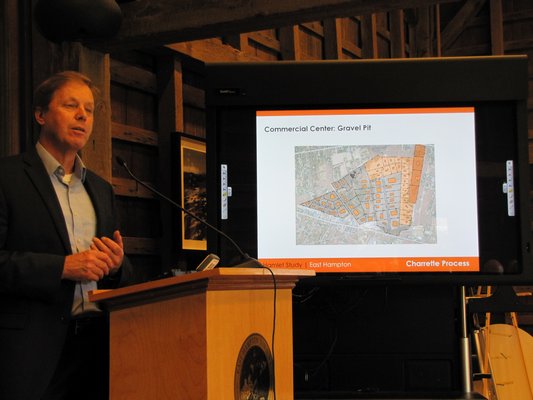 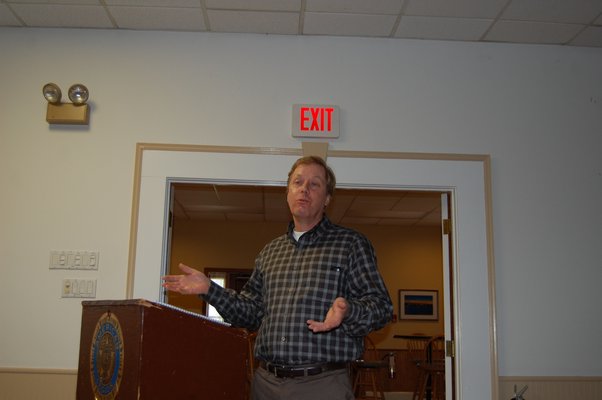 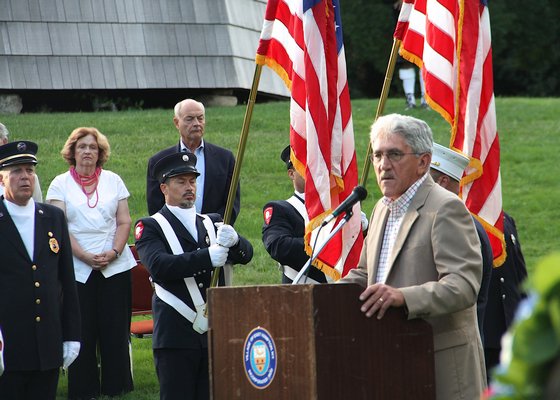 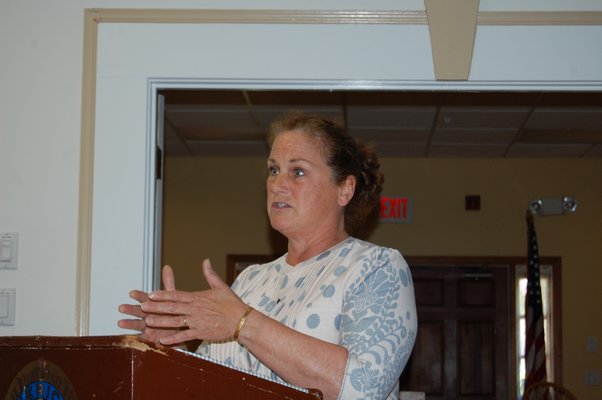 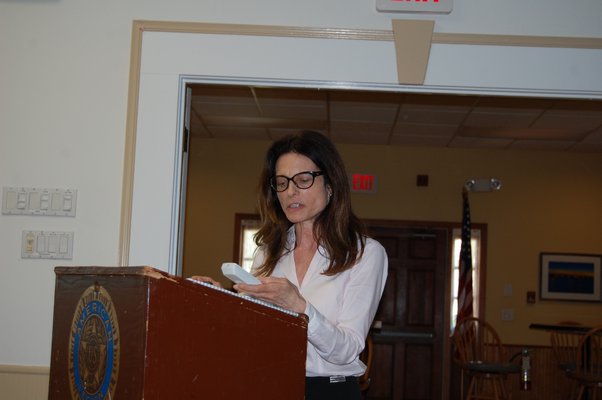 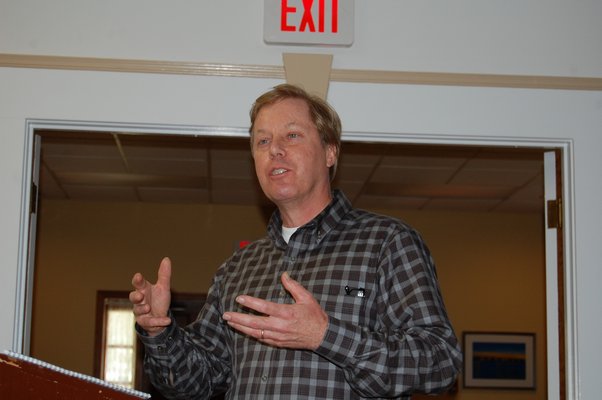 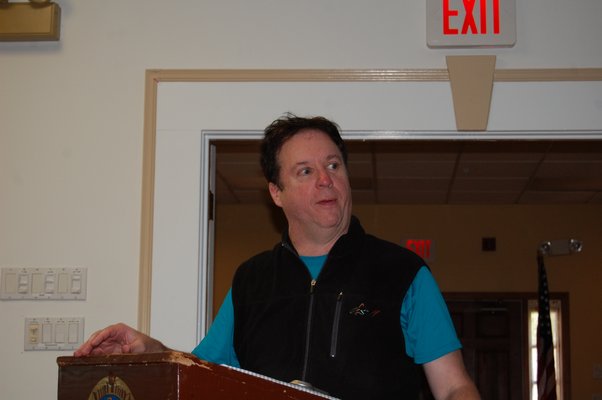 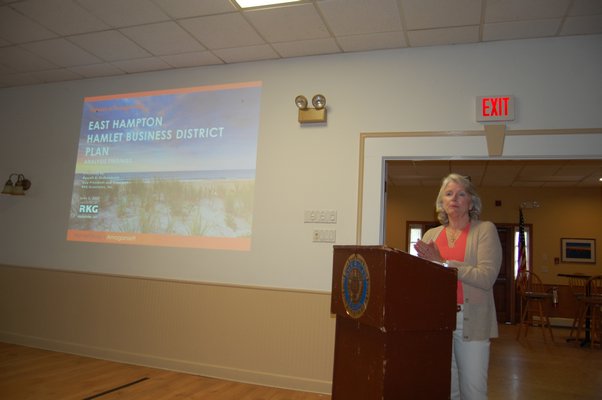 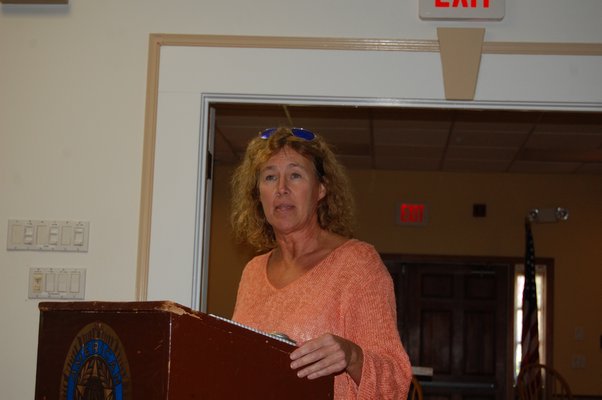 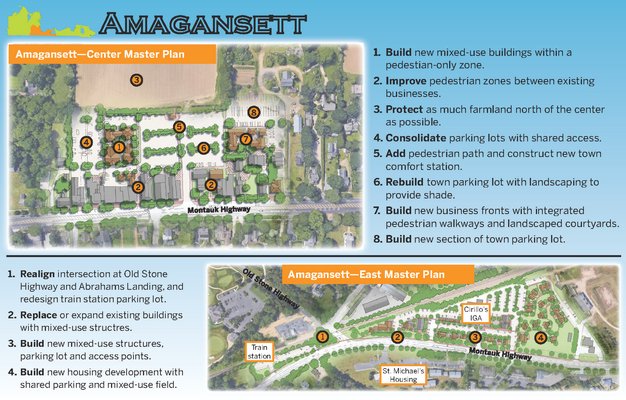 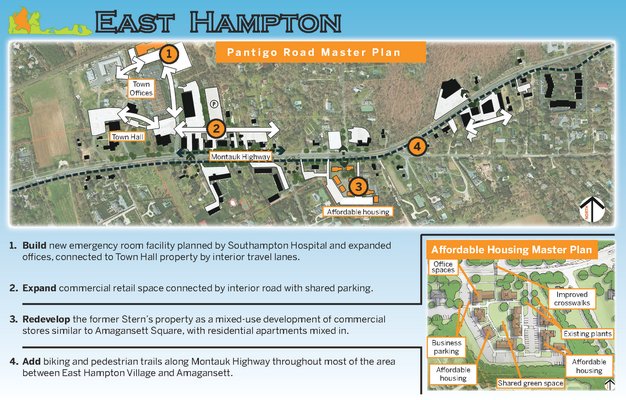 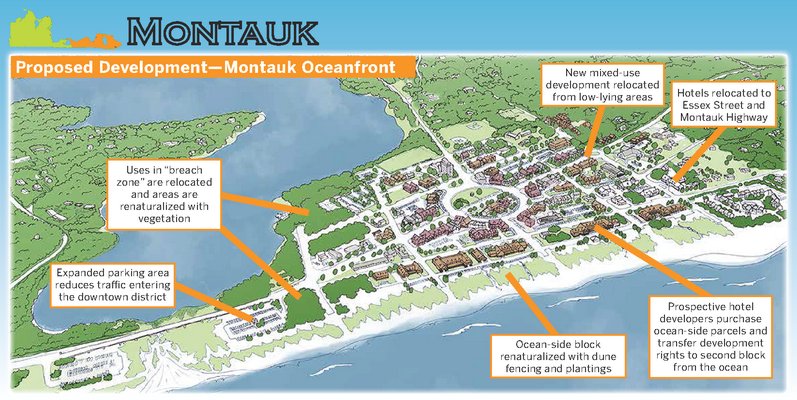 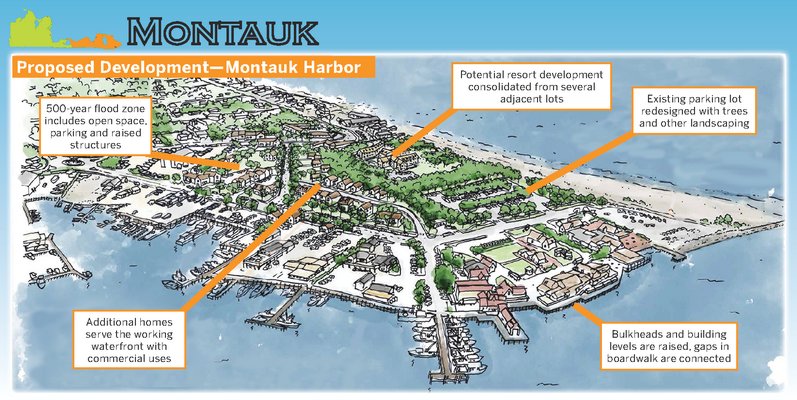 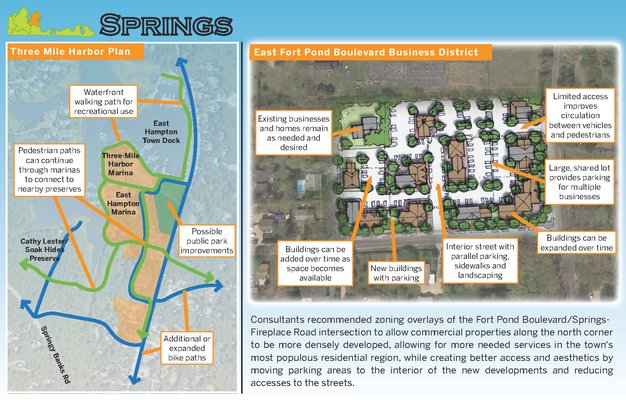 Over three days last week, consultants hired by East Hampton Town delivered a sprawling package of recommendations for guiding long-term development in hamlets across the town, aiming to allow business districts to grow and evolve over the next several decades into more appealing, efficient and vibrant commercial centers.

The recommendations focused on steering the future redevelopment of existing commercial districts toward more attractive, more walkable areas. The goal is to have customers park cars in shared lots at the rear or interior of business complexes instead of in front of individual buildings, and walk to a number of shops and other retail outlets, or drive between different businesses without having to reenter main thoroughfares.

The designs would be more aesthetically pleasing, cause less traffic congestion and would allow businesses to benefit from walk-in traffic, the consultants said.

“This study is not about locating areas for new shopping centers, new growth and new houses. It’s about how we can rebuild the places we’re already using and make them better,” said Peter Flinker, the engineer who led the study. “What we’re showing you is a vision and, if this is a vision you’d like to see, what do we have to change to make that come about? This is just the first step.”

Critical to many of the recommendations being feasible, the consultants acknowledged, will be creating sewer or clustered septic treatment systems that will allow more intense development without harming water quality.

The consultants, the Massachusetts engineering firm Dodson & Flinker, presented their recommendations at five separate presentations this week, one in each of the five hamlets. The company had hosted multi-day information-gathering meetings in each hamlet last spring and fall, walking the streets and holding brainstorming sessions with residents to learn about their needs and desires.

Comments can still be submitted by residents by email to ehhamletstudy@gmail.com. The full text and images of the consultants recommendations are available on the East Hampton Town website.

The consultants, who were paid $285,000 by the town to conduct the study, will revisit this week’s recommendations in light of comments from residents and present the Town Board with a final draft of their study in a few months. What becomes of the recommendations after that will be up to town leaders.

“We’re at the consensus-building stage,” Supervisor Larry Cantwell said on Friday morning at one of the meetings. “If there is consensus about what the highway in Wainscott should look like, for example … these things will get done. It will take on a life of its own. But if there’s a tremendous difference of opinion, nothing will happen.”

Ultimately, town planners hope to have the study reports and their recommendations adopted as amendments or addendums to the town’s Comprehensive Plan, to help guide future zoning regulations.

The consultants suggested that new zoning rules that would allow the various development changes to happen organically over time should be applied in the form of “overlay” districts that create special zoning for a specific region or area with a stated purpose.

The hamlet studies, which were recommended in the original Comprehensive Plan, focused only on the commercial and business districts of each hamlet, 12 regions in all. They did not look at environmental and residential development patterns, except with regard to how commercial development could be planned to affect both.

In Montauk, the major focus of the study was allowing continued growth in the face of the expected effects of rising sea levels. Gradually removing commercial business properties from areas expected to see the most destructive impacts, replacing them with natural features or uses that would survive storm surges, and helping businesses migrate to higher points in the hamlet topped the recommendations.

The area around the Montauk IGA grocery and 7-Eleven stores, the consultants said, likely should be abandoned as commercial districts, as the threat of a storm surge breaching the lowest point on the hamlet’s oceanfront and flowing into Fort Pond grows with the rise in sea level. The abandoned commercial lots could be purchased and returned to a natural state or turned into municipal parking lots—along a raised section of Montauk Highway, letting flood waters flow beneath it—which wouldn’t risk as much damage from storm surge. The consultants also say it would encourage motorists coming into the hamlet to park and walk into the downtown area, decreasing traffic congestion and increasing walk-in business.

The consultants also spoke about eventually abandoning five oceanfront hotels or motels along Montauk’s coastline. To allow the resorts to be torn down and replaced with engineered dunes, they suggested that the motels and hotels that lie landward, just across South Emerson Street—which is also removed in the long-term projections—be allowed to increase their number of units.

The proposals also show new, additional hotels inland, along Essex Street, along with additional commercial development in various voids in the current downtown layout—most of which sits well above even 500-year flood levels.

In the harbor area of Montauk, the consultants said, bulkheads and buildings along the waterfront could be raised as sea levels creep upward. They recommended that West Lake Drive terminate near the Gosman’s Dock property, rather than curving westward toward Soundview Drive, and be replaced with natural shoreline.

They presented a vision of a “fishing village” district, where residential development could be mixed with new commercial development inland of the dock area, between Wells Avenue and the Gosman’s parking lot, which would remain as the main public parking for the area.

The study report did not make specific recommendations about where to locate dormitory-style housing that has been talked about as a need to ease housing shortages for seasonal workers at Montauk’s restaurants, hotels and resorts.

Beyond Montauk, Wainscott could see the most substantial overhaul, focused on allowing retail growth while smoothing traffic flow as much as possible along the town’s most congested stretch of road.

To do so, the consultants suggested allowing new development along Bathgate Road, and eventually extending Bathgate Road, with shared parking lots between it and the existing commercial buildings.

The consultants also pictured commercial development eventually spreading into what is now the Wainscott Sand & Gravel pit, with a cluster of home services stores that currently occupy highway-front locations migrating northward, and industrial and light industrial uses farther north along a new roadway built into the reclaimed pit property. They suggested that large portions of the pit could also be dedicated to parks and ballfields, from which people could walk to stores and restaurants.

The concept of allowing more development, with less visual and traffic impact and more “walkability,” also was applied to the small cluster of commercial properties near the intersection of Springs-Fireplace Road and Fort Pond Boulevard, and the commercial and office properties east of the Town Hall on Pantigo Road.

In Springs, the consultants said, slightly more density at that one location could allow businesses that serve the large, and growing, residential population to move into the region, while cleaning up the current “hodgepodge” appearance of the area’s development.

At the “Head of the Harbor” area, the consultants envision a maritime district, with a smattering of retail stores and restaurants mixed with the existing marinas, and a boardwalk leading along the entire waterfront, connected to walking and biking trails snaking into the rest of the hamlet.

As in Wainscott, the consultants focused much attention on the potential redevelopment of the Bistrian sand pit on Springs-Fireplace Road when, decades from now, its usefulness for sand mining may have reached its expiration. The consultants said that working with the owners on long-term plans could allow for a mix of acquisition and rezoning that would allow it to evolve into parklands, light industrial and retail business uses, or even a large-scale affordable housing development.

Down Pantigo, they foresee the old Stern’s property being developed into a retail shopping plaza, along the lines of Amagansett Square, but with apartments above the stores.

In Amagansett, similar new development with a mix of residential and commercial uses could be created behind the existing Main Street businesses on the north side of Montauk Highway.

The recommendations show two new areas, one on either side of the municipal parking lot, both with residential and commercial uses accessible only on foot, both from Main Street and from adjacent shared parking areas. Such mixed-use and commercial development could also be added to the area around the Amagansett IGA, if demand warranted, at the eastern end of the hamlet’s business district the consultants said.

They recommended that the East Hampton Housing Authority’s plans for a rental apartment complex on Montauk Highway in that area could be tweaked to allow the facility to ultimately share a parking lot with the adjacent commercial businesses.

The consultants also recommended redesigning several intersections along Montauk Highway to incorporate two-lane roundabouts, to ease traffic congestion. They suggested that two could be employed in Wainscott, another at the Old Stone Highway intersection in Amagansett, and a third where Second House Road, Montauk Highway and Old Montauk Highway meet.

The presentations were met with a mix of excitement, apprehension and cynicism by residents.

“This is like a vision. This is like a dream, of all the things we’ve always talked about,” said Rick Del Mastro, a Wainscott resident, at Saturday’s presentation of the Wainscott recommendations. “The key is the execution and making a dream reality. While I get a warm and fuzzy feeling about this … I don’t see a plan of how it’s going to get done.”

Others said it will be up to the leaders in town government and the community to make sure the recommendations are taken to heart and advanced.

“This plan, everyone has to … make some hard decisions,” said Bonnie Krupinski, whose family’s sand pit on Springs-Fireplace Road in northern East Hampton was identified by the consultants as having one of the biggest needs for long-term planning in the town. “I’ve been waiting my whole life to get here. We all have to make this work. You have to look to the future, and you have to trust people.”